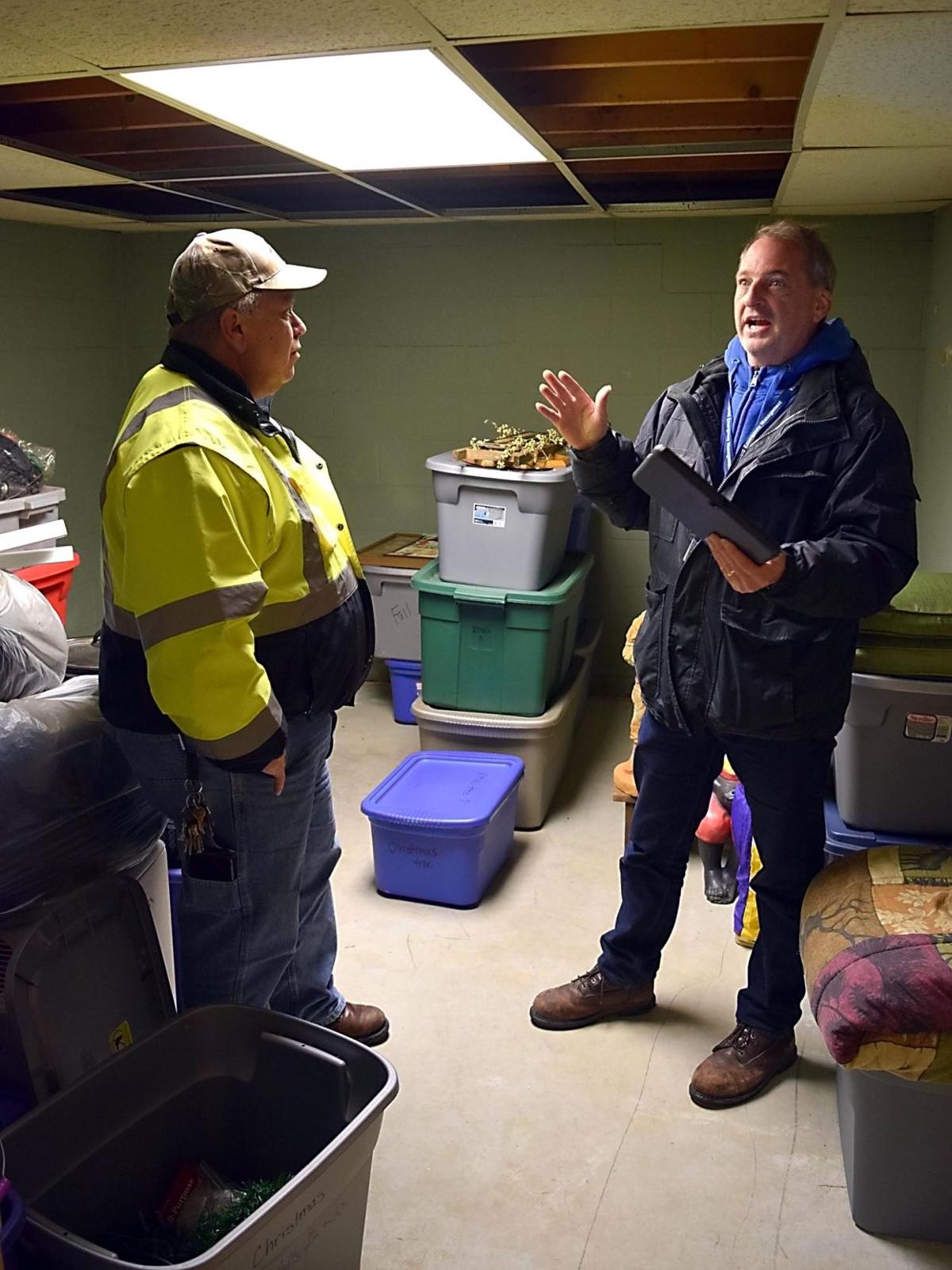 FEMA inspector Edward Tarr (right) speaks with Waseca homeowner Brian Tomford about the flood damage in his basement. Tomford thought his Waseca house had escaped signficant damage until later the walls started bowing and cracks developed in the basement. Photo by Deanna B. Narveson 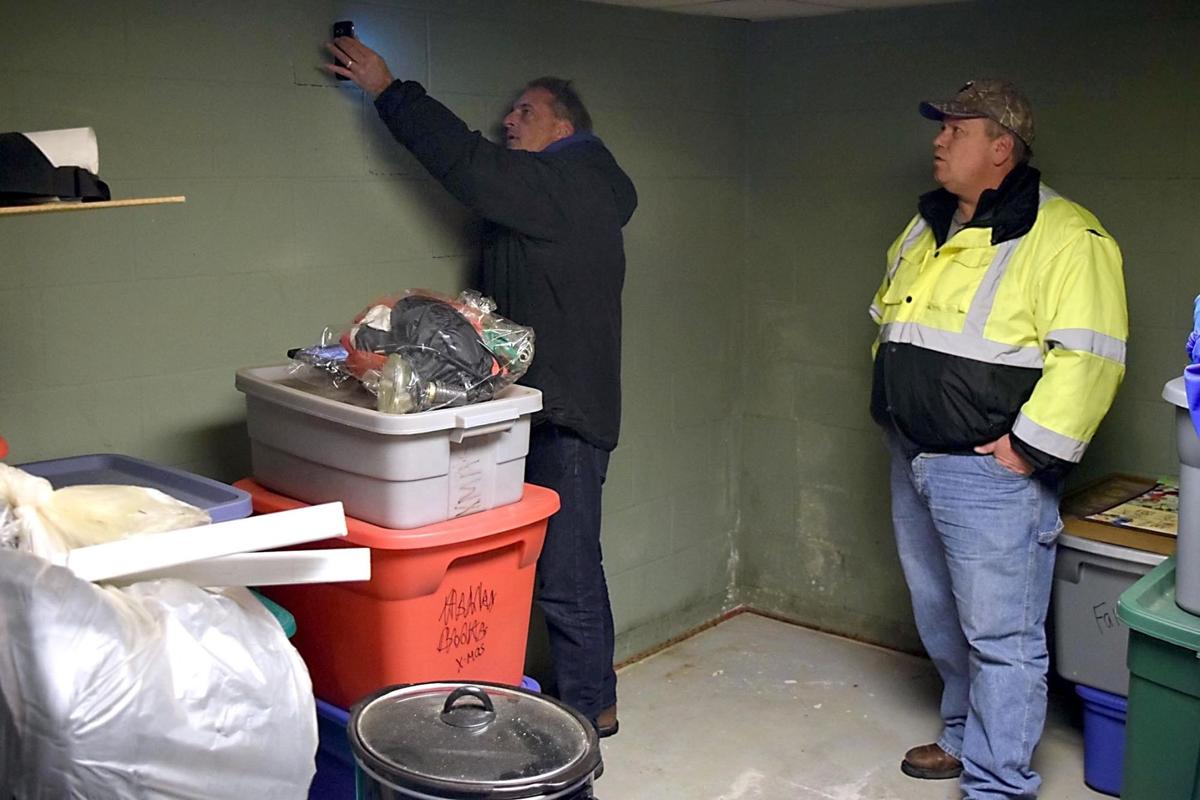 FEMA inspector Edward Tarr (right) speaks with Waseca homeowner Brian Tomford about the flood damage in his basement. Tomford thought his Waseca house had escaped signficant damage until later the walls started bowing and cracks developed in the basement. Photo by Deanna B. Narveson

WASECA — Brian Tomford thought he was one of the lucky ones.

He dried up the basement of his Waseca home after the flooding in September and thought he'd escaped the worst of the disaster that hit the region when 14 inches of rain fell at once.

Tomford didn't even need to replace his carpet because it was already torn up to make way for new flooring when the storm hit.

“When the floods initially came, I thought I was one of the lucky ones because I didn't have a lot of water,” said Tomford, who is grounds and maintenance director for Waseca County. “It was, I wanna say, maybe 3 1/2 weeks after, and that's when I noticed the wall moving on the inside of the house.”

The walls of his basement began to bow slightly inward. A deep crack in the sheetrock developed in one corner and the concrete block walls of the unfinished portion began to buckle, a fix that could add up to more than $8,000, he said.

Tomford’s Waseca home, where's he's lived with his family for 23 years, is among thousands in the region that could qualify for aid from the Federal Emergency Management Agency. In November the agency declared residents affected by the flooding qualified for individual assistance — federal grants to help people pay for repairing the damage from the storms.

After he applied for assistance, by registering online, an inspector from FEMA came to Tomford's house to look at the damage to his basement walls and collect information about how the flood impacted his home.

Edward Tarr, a FEMA inspector, walked through and around Tomford's house Wednesday. He took measurements and photos of every room, and trekked outside in the snow to get a look at the outside of the home where the basement walls were buckling. He said Tomford would get an email within 72 hours to let him know the agency's deicison.

Tomford thinks his house’s problems came from the pressure of ground water pressing against the outside of the underground walls, and that the freezing weather exacerbated it.

FEMA will then look over the information along with Tomford's registration and decide what kind of assistance he might qualify for, said FEMA Public Information Officer Darrell Habisch.

There might be some communication back and forth between Tomford and FEMA, Habisch said, because sometimes they need more information or they might refer him to the Small Business Administration, which offers low-interest loans to homeowners, renters and businesses for long-term disaster recovery.

“Part of the challenge we are seeing is it has been 2 1/2 months since the flooding happened, people have moved on,” Habisch said. “However now everyone is eligible to apply for FEMA assistance, and again this damage may not be apparent in your homes, so by all means they need to get registered.”

The grants can be awarded to help replace ruined furniture, lost medications, damaged wheelchairs or anything else lost in the floods, Habisch said.

FEMA is sending crews door to door in the affected counties, including Blue Earth, Freeborn, Hennepin, Le Sueur, Rice, Steele and Waseca counties, to help people get registered. They have set up centers in each county where people can register in person.

Additionally, flood victims can apply for help online at www.disasterassistance.gov, like Tomford did, or by calling 800-621-3362.

"If you were in an area that was in a lot of water, which was at least Waseca, I would get signed up and get your name somewhere in the system,” Tomford said. “Like I say, I thought I was good. And this just showed up after the water had subsided — and way after the storm."

He said someone who has a completely finished basement might not be able to see if anything bad is going on as a result of the floods.

Because Tomford has a hydronic heating system that runs hot water through the walls, cutting into his basement walls to fix the flood damage in the winter time could mean going without heat for up to two days during the coldest time of year. But he worries what could happen if he lets it be until the ice thaws in the springtime.

“It was great to know (FEMA) were going to come and look at it,” Tomford said. “Hopefully, we can get a little bit of assistance and move on.“