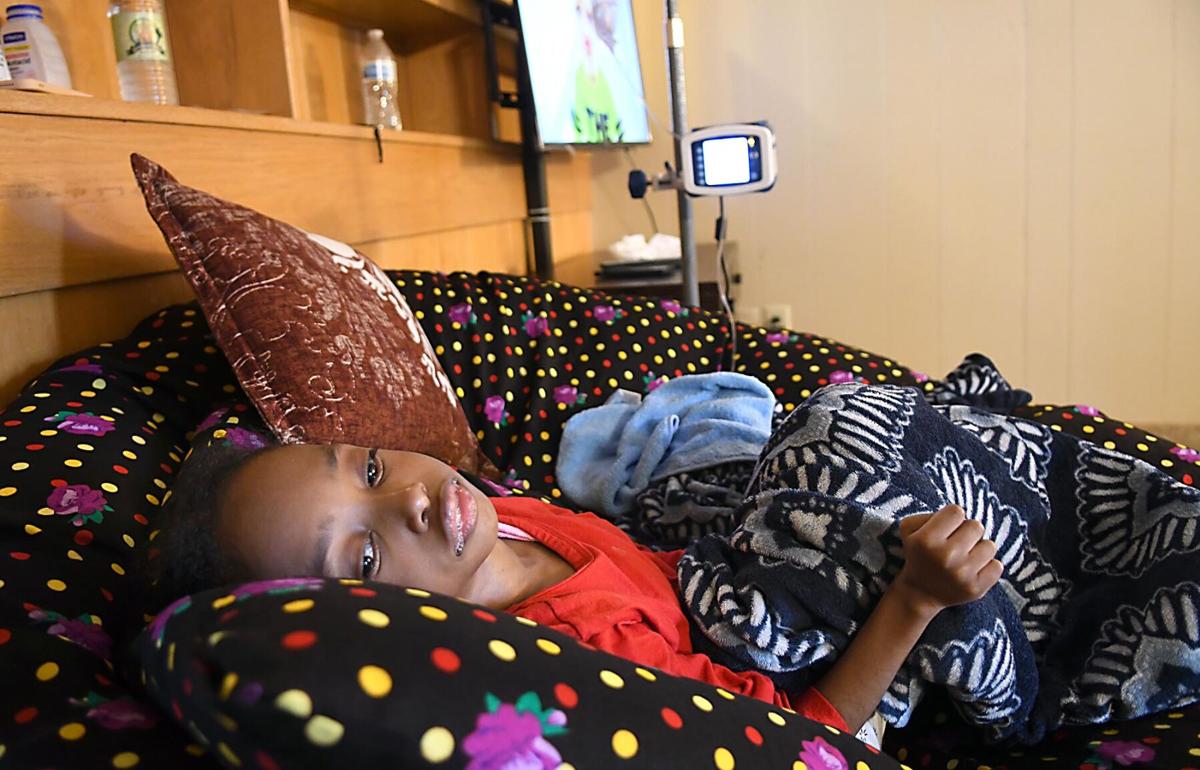 Ali and Fartun Abdi’s eldest daughter, 8-year-old Ansal, has lost the ability to walk or speak. The Abdis sleep in shifts and take turns checking on Ansal, who has great difficulty swallowing. 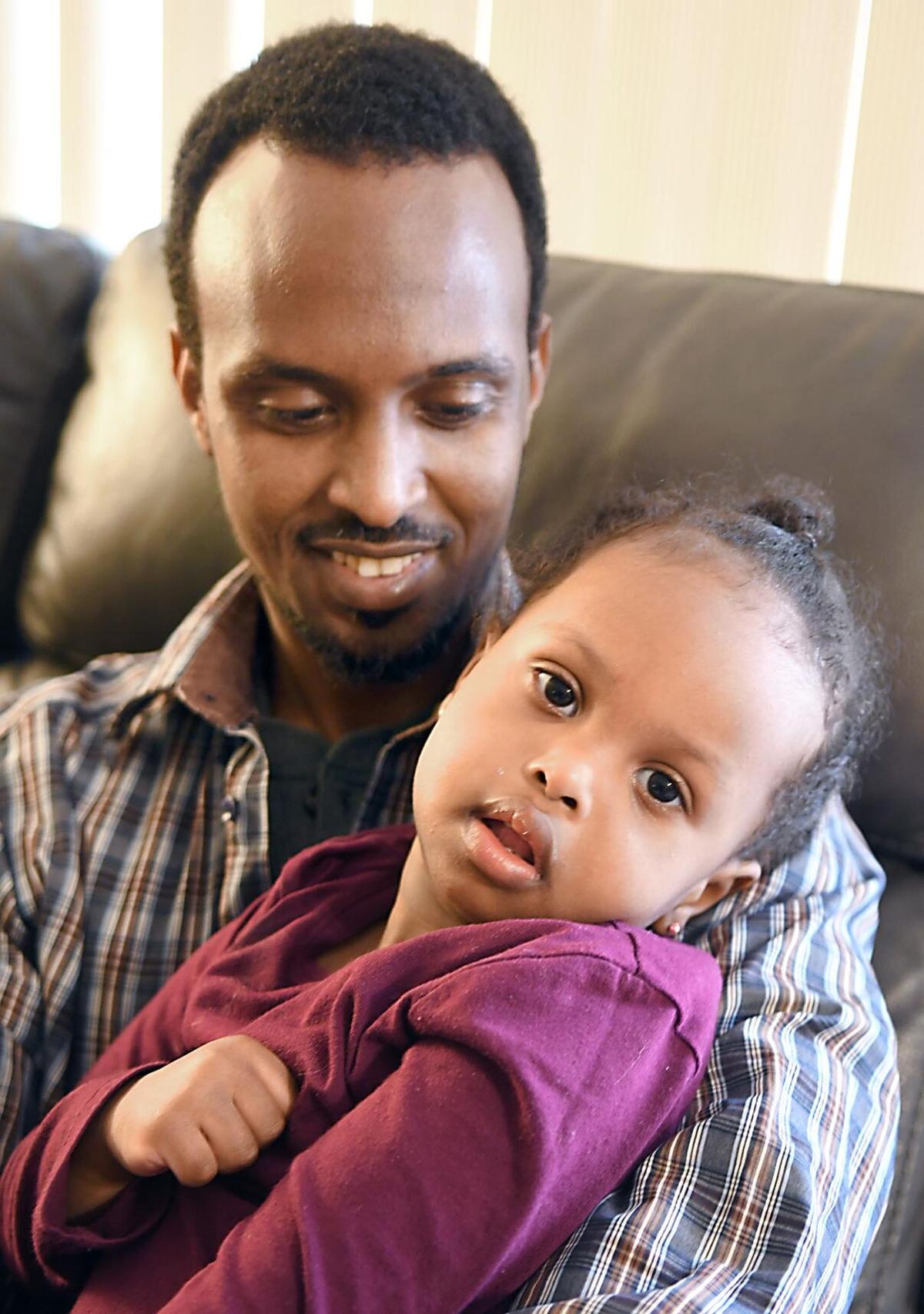 Ali Abdi holds his daughter, Maryam, who is nearly 3 years old. She is one of four children in the family. Three of them, including Maryam, have a rare genetic disease. that has no cure. 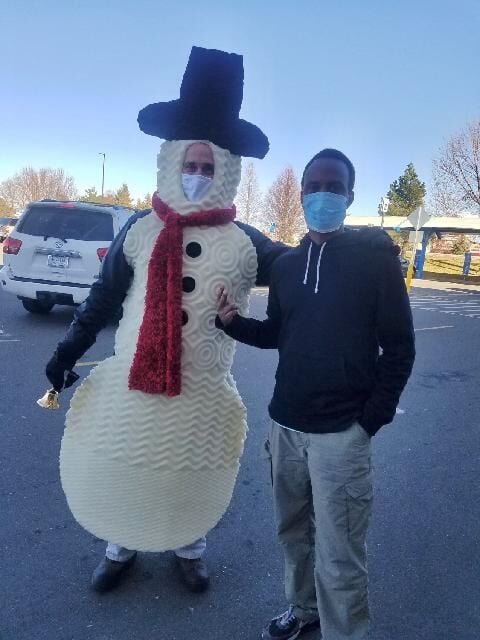 Steven Firkins was able to provide Ali Abdi with a bit of comic relief when the two friends bumped into each other while a costumed Firkins was collecting donations for The Salvation Army’s Red Kettle campaign. Firkins has befriended the entire St. Peter family. 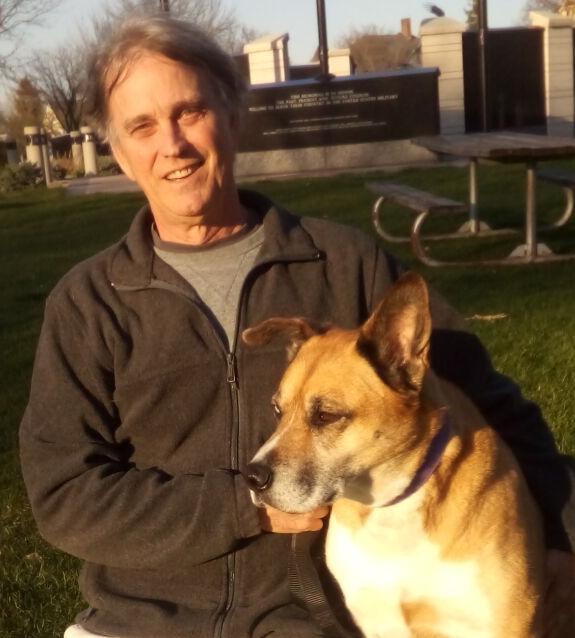 Steve Firkins was walking his dog, Izzy, on a warm day in March 2020 when he first met Ali Abdi. Throughout the past year, the two men have become good friends. Firkins has assisted with handyman projects for Abdi and his wife, whose three daughters have a fatal genetic disease.

Ali Abdi supports the neck of his daughter, Ansal, wearing red, while cradling his daughter, Maryam, wearing purple. Both girls, and their younger sister, Asiya, have been diagnosed with a fatal form of the genetic disease leukodystrophy.

On a warm afternoon in late March 2020, Ali Abdi and one of his young daughters, Maryam, sat outside their rental home observing the neighborhood along a St. Peter street they’d moved to only days earlier.

He hoped fresh air and sunshine would help relieve the fatigue that had built up after long hours of helping care for his three girls, all who have been diagnosed with a fatal form of the genetic disease leukodystrophy.

One problem weighing on his mind: The need for a bathroom large enough for his wife, Fartun, and him to provide personal hygiene care for their invalid children. Ali was treated to a temporary distraction from his worries that day when he spotted a happy-go-lucky pooch ambling down the sidewalk ahead of her owner.

“I was new in town and I didn’t know anyone. That’s when we saw Steve and Izzy.”

Steve Firkins’ dog with its blue and brown eyes and the movement of her ears (“one up, one down”) were easy conversation starters between the two St. Peter men.

“COVID had just started and it was just before Ramadan was to begin,” said Firkins, describing the day a smiling Ali waved to him and introduced his toddler.

Ali is a 34-year-old truck driver. Firkins is a 67-year-old retired counselor turned documentary filmmaker with four grandchildren who do not live in town.

“Steve and I have become best friends. If we don’t see him for four or five days, my wife and I start asking, ‘Where is he?’” Ali said.

Several times during the past year, the Abdis and Firkins have shared cups of ginger tea, occasional evening meals and discussions of spirituality. The two men share not only their pandemic and paternal experiences; there’s also an occasional prank.

Last December, Ali was in a store parking lot when a giant snowman called out his name. It turned out to be Firkins, who was in costume collecting donations for Salvation Army’s Red Kettle campaign.

Firkins said his wife, Amy, and he have not had much face-to-face contact with their children or grandkids during the last year because of the pandemic.

“Ali’s family became part of my small COVID bubble. I’ve been very careful about things like social distancing because of the girls’ health.”

Ali and Fartun appreciate their new friend’s calming presence and the handyman skills demonstrated when he helped refinish dining room furniture. Their three daughters, especially the middle girl, have taken a shine to Firkins as well.

“Maryam and I are good buddies. When we first met, she was just starting to walk. She would take both of my hands and we would go around and around their table.”

Over the past year, Firkins has watched his buddy’s legs weaken. Almost 3 years old, Maryam no longer walks and soon will require a feeding tube to receive nourishment, he said.

For Ali and Fartun, it’s their second time witnessing stages of rapid decline in a child of theirs. The eldest daughter, Ansal, who showed no signs of the disease when first born, is now a very ill 8-year-old. Her limbs have shriveled and she is no longer active.

“We cry a lot,” Ali said, describing the couple’s reaction to the incurable disease’s hold on their lives.

The family’s youngest child, soon-to-be-2 Asiya, also has been diagnosed with the same form of leukodystrophy that struck her sisters and is just beginning to show symptoms.

Their 9-year-old son, Abdullhai, does not have the disease. He remains in Kenya with Fartun’s mother.

The Abdis lived in Tennessee when they first immigrated to the United States. Doctors at Vanderbilt Hospital in Nashville were the first to discover Ansal was suffering from a deadly form of leukodystrophy.

“Doctors told us the name (of the variation their children have) but I don’t remember it,” Ali said.

He and Fartun met in a refugee camp before they came to the United States. Neither has a family history that includes members who suffered from leukodystrophy; however, both carry the gene in their DNA.

“No one in our family has had this, no aunts or uncles, no cousins. Our families are from the same community, so they would know,” he said.

Ansal had begun to have difficulty walking shortly before she arrived in the U.S. Leukodystrophy has now stolen that ability. Swallowing is extremely difficult, so she requires round-the-clock care.

Ali has cut down on trucking jobs to be available at home to care for his daughters. He said children’s hospitals or medical research facilities are not places for them to be because those places would offer little comfort.

“We comb their hair, change their diapers, clean them. The best treatment for our daughters is our love and to be with us.”

Sisters of Fartun who live in St. Peter share food with the Abdis and take care of some household duties, such as cooking and laundry. The Abdis receive some medical and financial assistance.

A hospice program provides dozens of diapers and checks in on the family weekly, Ali said.

Bathing their daughters is becoming increasingly difficult, he said. The bathroom in the two-story where they live is not designed for people with disabilities.

“They cannot make changes because they are renters,” Firkins said.

Chances are slim that the Abdis will become homeowners in the near future. Programs such as Habitat for Humanity have application processes that can take years, and there are income requirements and mortgage payments. Guidelines for nonprofits such as Make-A-Wish typically don’t gift child recipients with houses.

United Leukodystrophy Foundation’s director of operations, Keely Haag, is helping the couple connect with other parents of children afflicted with the same genetic disease. However, her nonprofit only provides financial support for medical research.

Haag said she understands why the couple chooses to care for their terminally ill children at home and why they don’t want their daughters to be part of leukodystrophy research.

“I was born with a congenital birth defect that, fortunately, could be treated cosmetically. I know what it’s like to be a kid who is being prodded and poked (by people in the medical field).

“I’ve seen both sides of the spectrum. Some feel time with their families is what’s best for their children. Others become warriors for research who want their child to be enrolled in anything that may help.”

Ali plans to continue cuddling and caring for his daughters, as well as to keep on hoping somehow, someone from somewhere will reach out a hand to help. He’s been feeling a bit more optimistic since a new season began for people of his faith.

Ramadan is a period of fasting and spiritual growth Muslims are observing this year through May 12. Many who practice fasting during daytime hours maintain they gain the ability to feel empathy for others, especially those who live in poverty.

A fairly new U.S. citizen, Ali, who fled the Somali civil war with his family when he was 3, believes his dream of a new home can come true here.

“I love this country. It is a wonderful place to be living in.”

Firkins also is holding out hope for his friend.

“Ali is a good person, his family is deserving of help,” Firkins said.

The disease that has the Abdi family in its grasp is one of 50-plus leukodystrophies in a group of genetic disorders that affect the central nervous system, according to the United Leukodystrophy Foundation.

These disorders are progressive, meaning they tend to worsen throughout the life of the patient.

Leukodystrophies are rare with very few spokespeople who are household names, said Keely Haag, director of operations for the foundation.

“Tim Conway (from "The Carol Burnett Show") was a person who tried to spread awareness. I believe he was the friend of someone with the disease.”

Leukodystrophies are mostly inherited disorders, passing from parent to child. Sometimes, it takes years for a family to get a correct diagnosis for their sick child, Haag said.

Doctors' diagnoses of the disease increased in the 1970s and 1980s. Still, leukodystrophies are often mistaken for multiple sclerosis, she said.

The diseases share some features. Like the leukodystrophies, MS is caused by the loss of myelin from the axons; however, the cause is different. Whereas leukodystrophies are generally caused by a defect in one of the genes involved with the growth or maintenance of the myelin, MS is thought to be caused by an attack on the myelin by the body’s own immune system.

There are some leukodystrophies that do not appear to be inherited but rather arise spontaneously. They are still caused by a mutation in a particular gene, but that mutation was not inherited.

Most types of leukodystrophy are treated with medications to manage a patient's muscle tone, seizures and spasticity. For some patients, physical and speech therapies may improve mobility, function and cognitive problems.

Stem cell or bone marrow transplantation is showing promise for a few types.

Only one type of many leukodystrophies is now a treatable disease.

Vanderbilt Hospital in Nashville, where the Abdi family's eldest daughter was first diagnosed with a form of leukodystrophy, is one of a few medical centers in the nation with specialists in the forms of the disease that affect children. Its Leukodystrophy Care Network was established in 2017 to bring the expertise of specialists in many disciplines to the care of young patients with leukodystrophies.

Those experts are from the fields of neurology, genetics, hematology, complex care, pulmonary care and social work.

Haag said a lively Facebook community is available as a resource to families of children with the fatal disease. Because so few children in the country suffer from leukodystrophy, there are no local face-to-face support groups.

• Hunter’s Hope was established in 1997 by pro football Hall of Fame member and former Buffalo Bills quarterback Jim Kelly, and his wife, Jill, after their infant son was diagnosed with infantile Krabbe leukodystrophy at 14 months. Hunter was 8 when he died.

The foundation the Kellys named for their son was established to bring encouragement and hope to families in the midst of suffering.

Age 70, of Garden City, died 5-12-2021 in Mankato. Visitation celebrating her life will be held from 3-7pm Sunday, 5-30-2021 at the Wellcome Memorial Community Room in Garden City. Mankato Mortuary assisted with arrangements.

Dorothy Kapfer, 90, born in Jamestown, ND on January 20, 1931 and longtime resident of Eagle Lake, MN, died on May 15, 2021 in Mankato. Interment was held at Ft. Snelling National Cemetery, Minneapolis. www.mankatomortuary.com