Dakota riders make their way down Riverfront Drive toward Reconciliation Park before a ceremony commemorating the 150th anniversary of the hanging of 38 Dakota in Mankato Wednesday. 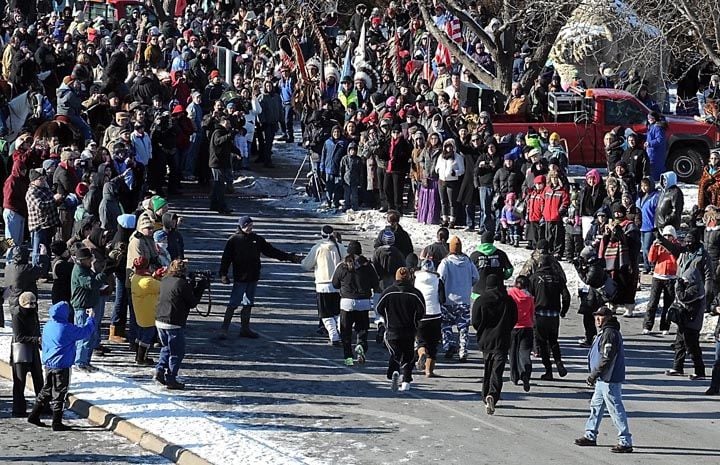 Dakota riders make their way down Riverfront Drive toward Reconciliation Park before a ceremony commemorating the 150th anniversary of the hanging of 38 Dakota in Mankato Wednesday.

Standing in Reconciliation Park, site of the hanging of 38 Dakota men, Arvol Looking Horse spoke of a long journey coming to an end.

The Dakota/Lakota leader was speaking of the 150 years since the largest mass execution in American history and about the 16-day horse ride many Dakota made from South Dakota to Mankato to commemorate the event.

“Today, being here to witness a great gathering, we have peace in our hearts — a new beginning of healing,” Looking Horse said.

Under clear skies with temperatures just above zero, 400 to 500 people packed the area around the downtown park as about 60 riders rode in for the nearly two-hour ceremony, which also dedicated a new “Dakota 38” memorial. A group of Dakota runners, who started at Fort Snelling, also arrived during the ceremony.

“This is a great day, not only for the Dakota but for the city of Mankato,” said Bud Lawrence, a Mankato resident who helped establish the first pow-wow and the start of a reconciliation effort in the 1970s.

The hangings on Dec. 26, 1862, marked the end of the U.S.-Dakota War that took place along the Minnesota River valley that fall. Following the war, 1,600 Dakota were held at a camp at Fort Snelling until being sent out of state and  virtually all other Dakota fled Minnesota.

The new memorial contains the names of the 38 Dakota along with a poem and prayer.

Sidney Byrd, Dakota/Lakota elder from Flandreau, S.D., read the names of the 38 men in the Dakota language. “I’m proud to be with you today. My great-grandfather was one of those who paid the supreme price for our freedom,” he said.

Byrd’s great-grandfather was among the 265 Dakota originally sentenced to death who were given reprieves by Abraham Lincoln. The men were sent from a prison in Mankato to one in Davenport, Iowa, where many died from squalid conditions.

The Maza Kute performers, a traditional drum and song group, sang a song composed for the 38 Dakota, to the pounding of a large drum.

Mankato Mayor Eric Anderson read a proclamation declaring this the year of “forgiveness and understanding.”

The Dakota behind the new memorial and the ride and run have used the mantra  “forgive everyone everything,” to mark the 150th anniversary. Those words will be engraved in Kasota stone benches that will be placed around the new memorial next summer.

State Rep. Dean Urdahl, who co-chairs a state task force commemorating the Civil War and U.S.-Dakota War, said that while great progress has been made through reconciliation and education, there remains a lack of understanding about what led up to the war and the travails that the Dakota suffered long after the war.

“Through understanding comes a healing that is still continuing today,” Urdahl said.

Richard Milda, of the Crow Agency in Montana, was among a small group of riders who made the entire trip from Lower Brule, S.D. to Mankato — the third year he’s taken part in the ride.

“I heard about the ride and was attracted to its message of forgiveness and remembrance,” Milda said. “This year’s ride was more powerful,” he said of the 150th anniversary.

“There was a lot of support from non-Natives along the way. A lot of towns that hadn’t taken us in in the past did this year. Making appearances at church groups and schools along the way was very rewarding, very empowering,” Milda said.

He said the care and safety of the horses on the long, cold journey was paramount on the riders’ minds.

“We don’t own the horses. We belong to them. They’re a part of our family.”