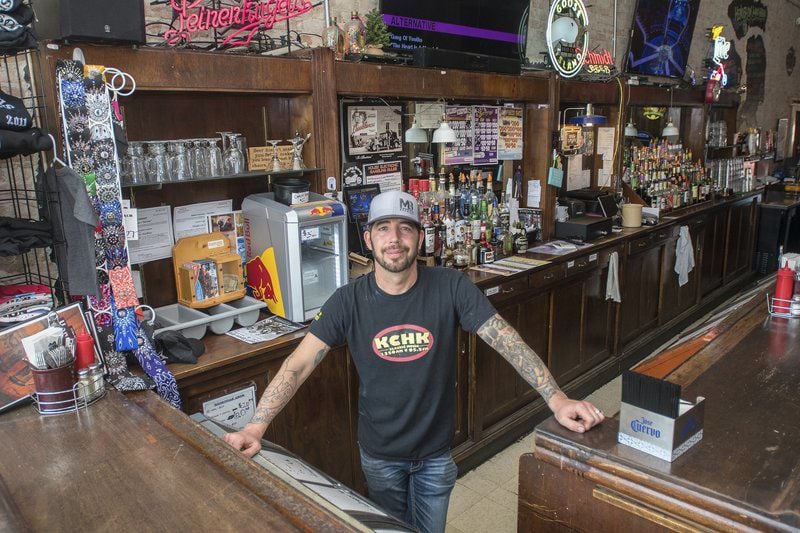 Photos by Jackson FordererDanny Ross has owned the RoadHaus Eatery, Bar and Event Center in Henderson for the past seven years. The restaurant, bar and event center are all connected businesses in downtown Henderson. 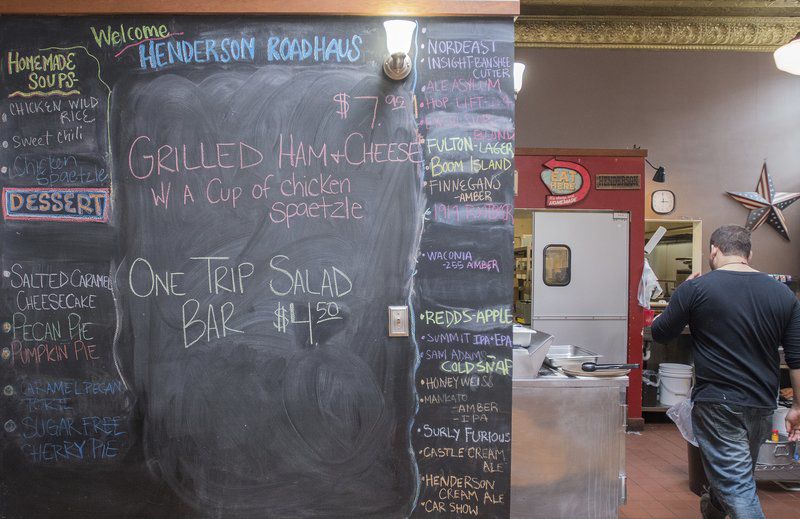 Cook Damion Taylor (right) walks past the large chalkboard in the RoadHaus Eatery that highlights specials and drinks of the restaurant. The restaurant is also connected to a bar and an event center in downtown Henderson. 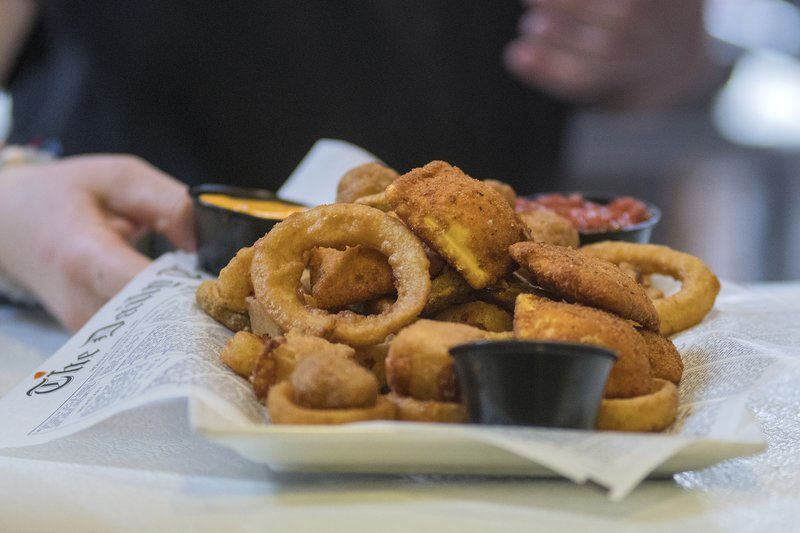 Photo by Jackson FordererServer Angela Youngren grabs an appetizer sampler from the kitchen window at the RoadHaus Eatery in Henderson.

Photos by Jackson FordererDanny Ross has owned the RoadHaus Eatery, Bar and Event Center in Henderson for the past seven years. The restaurant, bar and event center are all connected businesses in downtown Henderson.

Cook Damion Taylor (right) walks past the large chalkboard in the RoadHaus Eatery that highlights specials and drinks of the restaurant. The restaurant is also connected to a bar and an event center in downtown Henderson.

Photo by Jackson FordererServer Angela Youngren grabs an appetizer sampler from the kitchen window at the RoadHaus Eatery in Henderson.

But once in a while, a person comes along who so embodies a particular colloquialism that an exception must be made … and when it comes to Danny Ross, you can’t judge a book by its cover.

Covered in tattoos, unkempt jet black hair stuffed under a ball cap, Ross seems to fit the bar and restaurant culture to perfection. Anyone who’s worked in a restaurant understands there’s a distinct culture among line cooks that involves rough language and a subversive nature.

Ross, 42, whose family owns the long-standing Arlington Haus and the Henderson RoadHaus, grew up in restaurant kitchens. He still looks the part. But there’s a lot about him that would surprise most people.

Most notably? Ross was a ballroom dance instructor for 14 years.

“I am big into music, and it was the late ‘90s with the swing craze of that time period,” he said. “And (I went to see) the jazz bands and rockabilly bands at the time, and I just started dancing.”

While dancing at a Ritz-Carlton one night, a guy asked Ross where he taught dance lessons. (He, of course, did not.) And that compliment led him to pursue dance and learn ballroom styles ― the Argentine tango being his favorite.

“I still teach a little bit here in our event center,” Ross said of the RoadHaus.

During the last seven years or so, Ross has dedicated his time to managing and transforming the RoadHaus, whose roots can be traced back 32 years to another business his mother, Denise Swenson, owns.

During Ross’ formative years, he spent a great deal of time working at the Arlington Haus, a popular pub and eatery that opened in 1986.

He cleaned, did dishes and started learning basic food prep at 10 years old. Later he worked as a line cook.

At age 16, Ross took a job as a food runner for the buffet the first year Mystic Lake Casino Hotel opened under that moniker. He worked as a cook elsewhere during high school before moving to Florida to work at an Italian family restaurant as a prep cook, eventually moving up to executive chef at a young age.

“At that point, I was 20. Everybody was older than I was. It was a high-volume establishment. A salaried position,” Ross said. “My only day off was Monday because the restaurant was closed that day.”

Years later, following the ballroom era ― and after Ross was married to his wife, Amy Ross, and they had their first child ― they were living in Minneapolis and looking for other opportunities. He was thinking about going to work with his mom at the Arlington Haus when the opportunity arose for the family to buy the Henderson RoadHaus space.

The daughter of the family who held the note to the place had worked for Swenson, and they thought perhaps she might want to open a second location in the historic 1914 Main Street building.

“We came and looked at it and fell in love,” Ross said.

Ross had 100 percent reign over the restaurant’s look and menu choices, which includes mostly American fare. The cube-shaped cheese curds are especially popular.

First-time customer Cindy Caughey said the flavor reminded her a bit of a grilled cheese sandwich. On a warm afternoon, Caughey and her friend, Marie Enberg, who are in their 20s, were sitting in the bar area. A couple on the restaurant side ― who Ross greeted by name ― were in their 80s.

Ross said that diverse clientele is typical and exactly what he was hoping to achieve when they opened.

Ross was also quick to capitalize on Henderson’s tourism. The river valley attracts a lot of visitors, so an attached event space is marketed for music, open mics, meetings and special events like weddings.

The bar and restaurant also does a lot of programming like car roll-ins and art classes.

A newer addition to the restaurant is a newly constructed store nook at the storefront window called Archaica Curiosities & Obscurities with handmade wares from “archaic to the apocalyptic.” There are skulls, bath bombs, gothic mirrors, paintings and “all things interesting.”

Another recent addition to the RoadHaus will be especially popular with tourists, Ross surmises. Henderson attracts a lot of Prince fans because a dirt road east of town and a spot on the banks of the Minnesota River were filming locations in 1984’s “Purple Rain” movie.

Ross added a marble bench, mural, street signs and landscaping outside, an idea spearheaded by Joel King, a retired Hollywood cinematographer who lives in Henderson.

As for the food, Ross has added St. Paul style hand-tossed pizzas to the menu, which honors his grandfather who owned a pizzeria in St. Paul.

“It will channel memories of my grandfather,” he said.

Ross is excited about the future of the RoadHaus and his plans to keep bettering the place. There’s work to be done on the event center to update it and add French doors leading out to an outdoor courtyard, for example.

But he’s also happy with how far the place has come, including everything from paint to windows to removing carpeting from the walls. Community volunteers have even been part of the renovation work.

“I can’t say enough great things about the people here,” he said. “It’s hard to put it into words.”