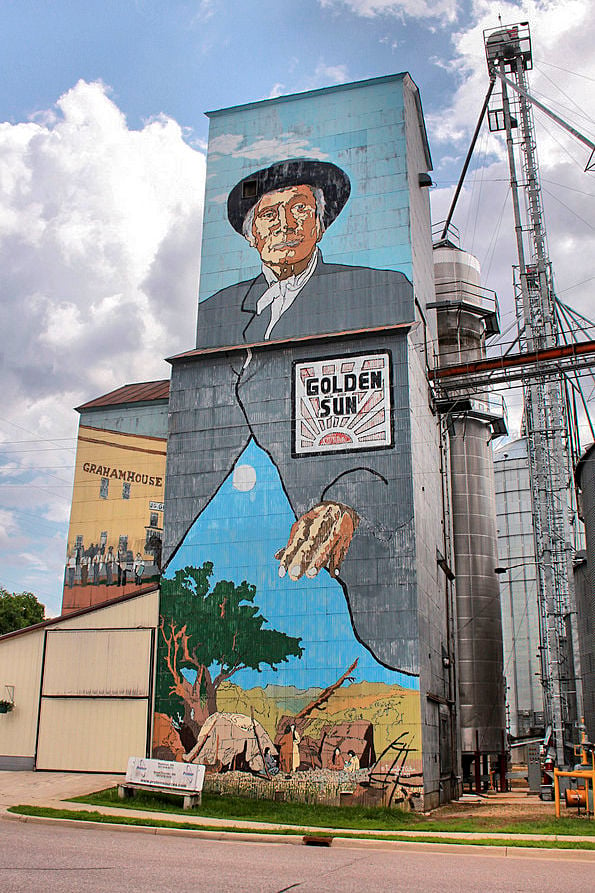 A portrait of Andrew Good Thunder dominates the town elevator’s north-facing side. 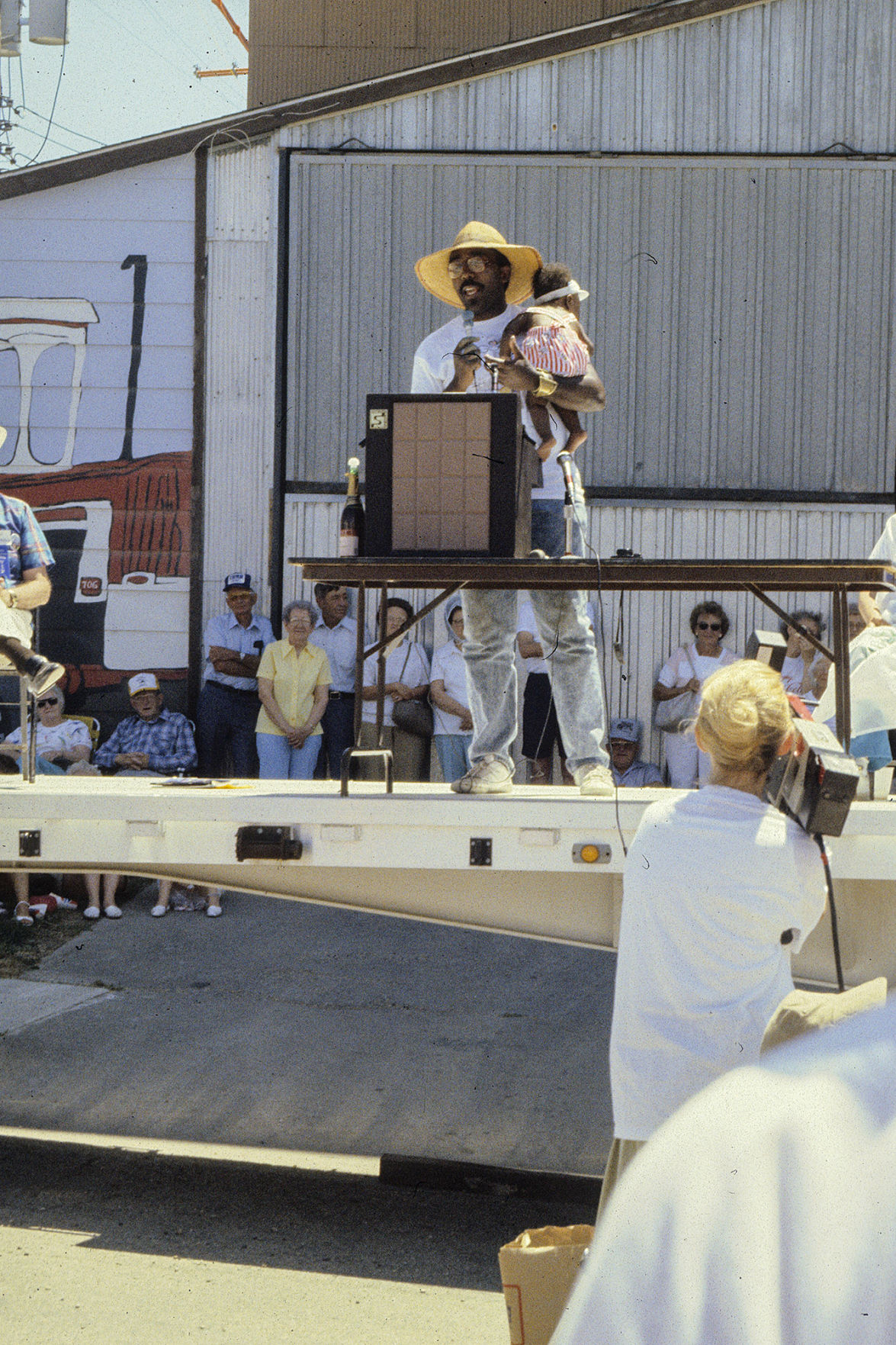 St. Paul artist Ta-coumba Aiken participated in a July 4, 1988, dedication ceremony for a mural he painted at Good Thunder. 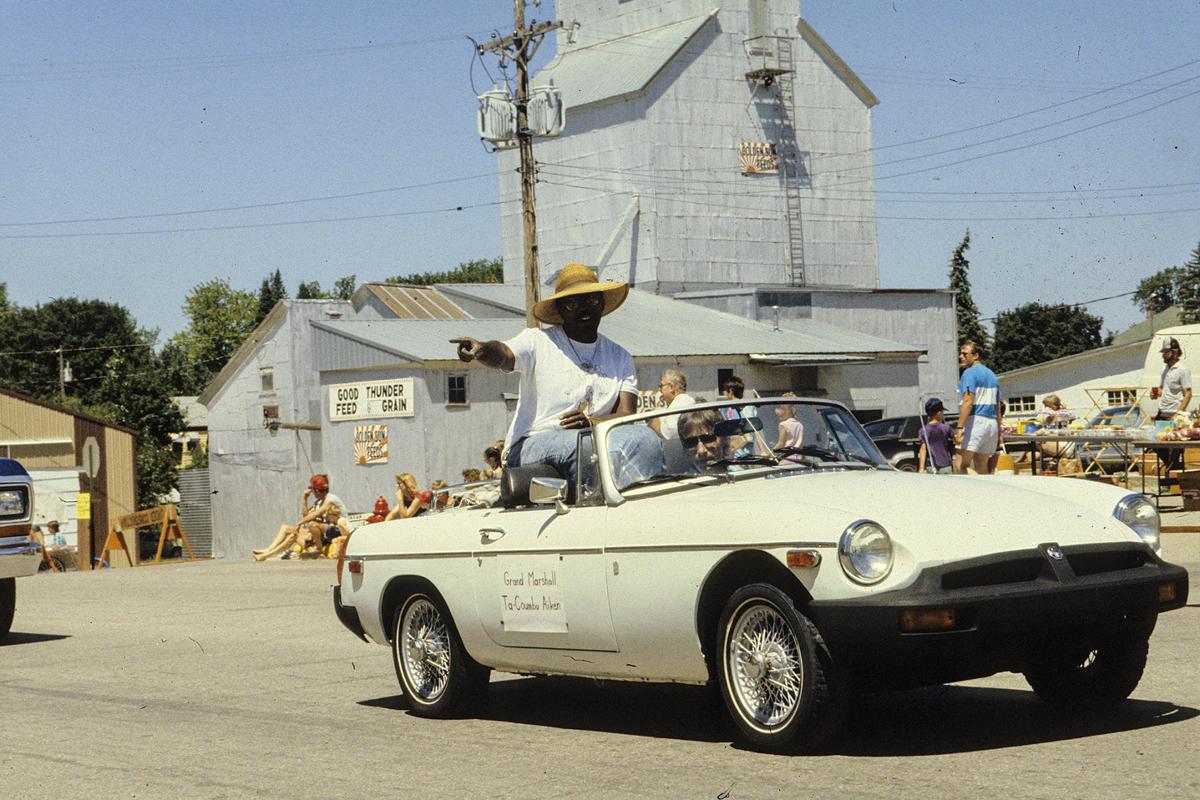 A portrait of Andrew Good Thunder dominates the town elevator’s north-facing side.

St. Paul artist Ta-coumba Aiken participated in a July 4, 1988, dedication ceremony for a mural he painted at Good Thunder.

Good Thunder’s plan to use a grain storage facility as a beacon to draw art lovers to town was decades ahead of the recent idea for Blue Earth County’s largest community.

A large mural looms above the village with a population of less than 600 located about 30 minutes south of Mankato.

Aiken said Tuesday during a phone interview about his 1988 project that he’d always wanted to paint a grain elevator. Artwork on a structure of great importance to a town would serve as a testimony to rural communities.

His earlier plans for a similar project at St. Louis Park were thwarted when that city’s elevator was razed.

Aiken was recruited for the Good Thunder mural when the town was awarded a grant from a Minnesota paint business.

Ann Christianson, a former New Yorker and wife of the town’s then-mayor, piqued his interest by saying she had long believed Good Thunder’s elevator would make a perfect artist’s canvas.

In 1987, Aiken arrived in town along with a thousand gallons of exterior paint, a donation from the Valspar paint company in the Twin Cities.

His mural project required an accurate system for preliminary drawings on the building.

“The biggest challenge was there was no blueprint for the building. That made it really hard for me to measure.”

Aiken’s other challenges: an art critic who lived near the elevator and a smelly concoction that held the paint to the elevator’s metal surface.

Before Aiken applied colors to the elevator, he coated its surface with an odorous bonding polymer.

“People smelled it and thought there was a gas leak in town.”

During the mural project, Aiken not only researched local history, he attended community meetings to hear stories from local residents.

The artist, who also is a longtime community activist, had asked for input from residents to help select images and personal memories to select the images for surfaces on the elevator and two of the storage silos.

One persistent man would stand across the street and shout his suggestion on the 40-foot portrait of the town’s namesake, Andrew Good Thunder.

“He kept shouting ‘put a feather in his hat!’”

Aiken was not able to get across to his critic the fact that the photograph he was using as reference shows his subject in an unadorned black bowler.

The portrait of Andrew Good Thunder still dominates the elevator’s north-facing side.

Good Thunder (Wakinyanwaste) was a Dakota leader who, in 1861, became Bishop Henry Whipple’s first adult male convert to Christianity. After the U.S.-Dakota War of 1862, Whipple lobbied on the behalf of Good Thunder, for Good Thunder’s family to be allowed to remain in Minnesota when other Dakota people were deported.

War hero Robert Stratton also is represented in the mural. So is the VFW color guard, town kids playing in snow, deer and a John Deere tractor. The west-facing side of the elevator portrays the Graham House hotel with John G. Graham and his wife Loretta Barnard Graham towering beside the hotel.

Aiken also added an image of his own inspiration to the mural, two children with a computer in a corn field, to symbolize his vision of the future for rural America — “a dream that technology, agriculture and small town values can merge and encourage young people to pursue careers in rural towns,” according to Minnesota State University librarian Bobbie Bothmann’s paper “The Historical Geography of Good Thunder: 1870-2005.”

The paper, available online at the website for Cornerstone, a collection of scholarly and creative works for MSU, includes the following a description of the genesis of the mural project:

The town’s commercial district was ailing in the early 1980s when Mayor Christenson created a plan to apply for federal funds.

MSU Urban and Regional Studies students in a downtown redevelopment seminar would prepare the village’s Urban Development Action Grant. The students were instructed to incorporate in their plans the flavor of the Good Thunder cultural landscape.

Although the Urban Development Action Grant, as well as all the other grants for which Good Thunder applied, were unsuccessful, they set up the beginnings of a plan for revitalization.

In 1984, the village council applied for a $30,000 grant from the Blue Earth County Small Cities Economic Development Commission which was successful. With the grant, the village created a $15,000 revolving loan program which lent $500 to $2,000 to local businesses to remodel and refurbish the downtown buildings.

Throughout the rest of the 1980s, that program brought an auto body shop; allowed a filling station that had closed in 1984 to re-open; provided financing for Bruscke’s hardware, which otherwise would have closed; and attracted a dentist and beautician to open shop.

The other half of the grant from Blue Earth County went to the Good Thunder Development Corporation, a non-profit entity formed by Ann Christenson and Dennis Anderson in 1984.

The purpose of the corporation was to cultivate an arts and crafts niche for Good Thunder in the economic landscape, because the city could no longer afford to “depend on its traditional agricultural economy, nor (was) it in a strong competitive position to attract commerce and industry.”

The corporation felt the name Good Thunder was “highly marketable,” and that the village could play off the unique name and the healthy art and antique community developing in the village.

The corporation’s rationale was rather than compete with every other rural Minnesota community for business or industry, the corporation would create a niche for Good Thunder as a rural center for the arts.

The first step in the corporation’s grand plan was a project titled “Painting on a Grand Design,” the creation of a mural to attract attention and new residents, and to be a “beacon to artists wanting to live in a small town.”

The project took advantage of that ubiquitous feature of Midwestern landscape — the grain elevator — and turned it into a vehicle of artistic expression.

The mural put Good Thunder on the proverbial map.

Its story was picked up by news media across the region. A Twin Cities news station reporter came in a helicopter and landed on Main Street to cover the story.

The mural also made headlines in papers across the nation and even internationally when the story was covered on the BBC.

Aiken still lives in St. Paul and continues to work as an artist and activist.

He said he’s returned to Good Thunder many times.

“Working on the mural was one of the greatest experiences in my life.”