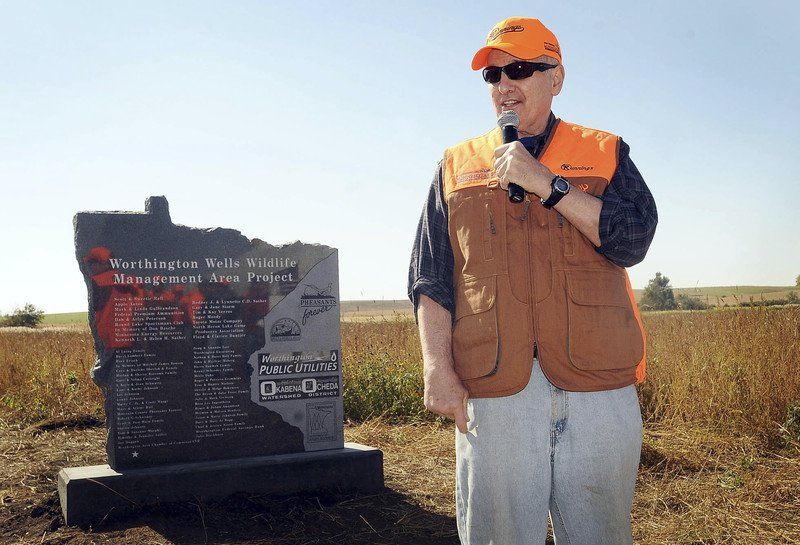 Gov. Mark Dayton speaks at the dedication of a Wildlife Management Area south of Worthington during the Governor's 2014 Minnesota Pheasant Opener, a tradition Dayton began in 2011. To boost pheasant numbers in the state, he recently proposed requiring buffer strips along all the state's rivers, streams and drainage ditches. Photo by John Cross 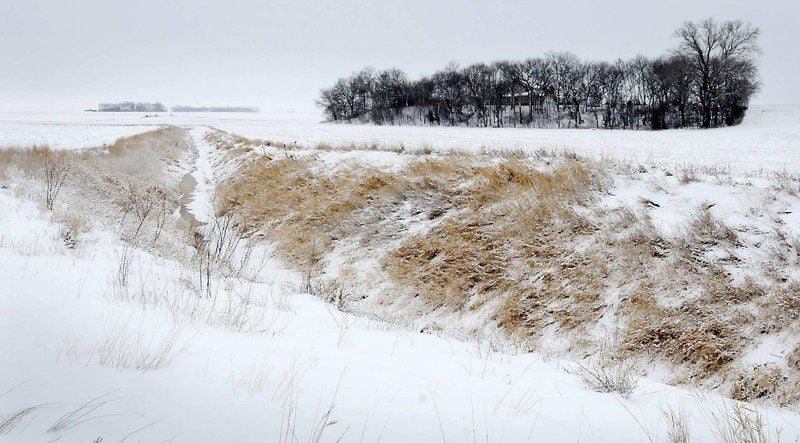 A proposal by Gov. Mark Dayton would require grass filter strips to be maintained along the edge of drainage ditches like this one between Mankato and St. Clair. Photo by John Cross

Gov. Mark Dayton speaks at the dedication of a Wildlife Management Area south of Worthington during the Governor's 2014 Minnesota Pheasant Opener, a tradition Dayton began in 2011. To boost pheasant numbers in the state, he recently proposed requiring buffer strips along all the state's rivers, streams and drainage ditches. Photo by John Cross

A proposal by Gov. Mark Dayton would require grass filter strips to be maintained along the edge of drainage ditches like this one between Mankato and St. Clair. Photo by John Cross

Gov. Mark Dayton's recent announcement that he would push for a law that would require streams, rivers and farm drainage systems to have some type of vegetative buffer resurrected a debate that sparks passion and conflict between farmers and conservation and outdoors groups.

Dayton, revealing his plan at a Department of Natural Resources roundtable, said the proposal would create 125,000 acres of grass land that would create pheasant habitat and promote cleaner water.

Scott Sparlin of the New Ulm-based Coalition for a Clean Minnesota River was at the roundtable when Dayton made the announcement.

"There were like 400 of us in the room and everyone's jaw dropped. It's a pretty bold and aggressive statement to make," Sparlin said.

"Is it something that would be good for water quality? I guess I can't think of a better first step."

Farm groups reacted with skepticism and concern for the proposal but refrained from outright opposition to the initial announcement.

"As an organization that looks out for farmers, we're concerned with the blanket statement that was presented," said Tom Slunecka, executive director of the Minnesota Soybean Growers Association, based in Mankato.

"There were a lot of details that weren't explained, so we'll reserve final judgement until we see what those details are."

Slunecka said farmers work hard to implement conservation practices and said he's concerned that stream and ditch banks must have a buffer is too broad a statement.

"The loss of 125,000 acres of production land is something any farm group should be concerned about," he said.

"In concept the idea makes sense, but in reality land is not uniform as it comes up to waterways. Some is sloped up and some is rocky and it's not conducive to pheasant habitat," Slunecka said.

"So the blanket statement needs to be worked through."

According to Sparlin, Dayton acknowledged there would be strong pushback of the idea. "He said he'd really work on not letting it get co-opted or eroded."

Sparlin said protecting water is vital in Minnesota. "We're talking about irreplaceable resources in our state. These lakes and rivers, turning the clock back on them is really difficult. Teddy Roosevelt said the best conservation is the preservation of what you have."

Dayton's announcement lacked any details. He mentioned a 50-foot buffer strip, but it was unclear if the width of strips would be different for farm drainage ditches and rivers and streams.

Current law calls for 50-foot buffers along DNR-protected rivers and streams and for a 16.5 foot (one rod) strip along some farm drainage ditches.

The laws regarding buffer strips in Minnesota are often cited as being poorly enforced. Indeed, there is plenty of evidence many counties largely responsible for monitoring the laws don't make it a priority.

But the actual laws on the books are often misrepresented as requiring buffers along most all the state streams and rivers and all its open farm drainage ditches.

There are actually two laws regarding buffer strips. One requires 50-foot strips along all state protected waterways — typically rivers and streams.

The other requires a 16.5-foot buffer strip on the side of farm drainage ditches only under certain circumstances.

Existing open drainage ditches are grandfathered in, meaning they don't require a buffer.

But that changes if a new ditch is dug or if an existing ditch is "improved."

An improvement means an existing ditch is altered from what it originally was — either dug deeper or wider or if slopes along side it are significantly changed.

Ditches that are simply cleaned out — with sediment removed to bring it back to its original dimensions — do not trigger the law requiring a buffer strip.

Another situation that triggers a buffer requirement is if there is a "redetermination" of a stretch of ditch. A redetermination means the county that overseas the privately owned ditch systems, reassess what percentage of ditch costs each landowner along the ditch system must pay.

Those ratios are re-determined if a ditch or surrounding fields are changed in a way that gives more drainage benefits to some landowners and less to other landowners.

Because counties must approve ditch cleaning or improvements, they can track who should then have buffer strips.

According to a report by the Board of Soil and Water Resources, 255 miles of ditches had buffer strips added to them statewide in 2013. The report said 162 violations of the law were found during ditch inspections.

"One was a new ditch and the rest were improvements and redeterminations," Austinson said.

Rather than doing redeterminations of individual stretches of ditches as the need arises, some counties are considering or beginning the long process of redetermining the entire county ditch system, something that would then require all ditches to have buffers. Officials say countywide redeterminations should be done because farm tiling, the landscape and ditches have changed so dramatically in recent decades that the old formulas of how much each parcel of land benefits aren't accurate.

"We would like to do a redetermination of the whole county," Austinson said. "It's a very complicated process, though."

Nicollet County is in the midst of doing a redetermination of all its ditches, but it's not a quick process as surveyors, ditch viewers and a host of others are involved.

Those ditch systems range in size with many that drain thousands of acres of land. As the ditches are redetermined, permanent buffer strips are being added, she said.

"At some point it's going to come down from the state or federal level that we're going to have to do it. And they're not going to fund it. So if we can be proactive and do it locally it's better."

Freeborn County is the only in the state that has already done a countywide redetermination.

Evaluating how many streams and rivers should have buffers but don't has gotten some increased attention in recent years.

The Environmental Working Group created aerial maps of the state that show large disparities from one watershed to another when it comes to enforcing the buffer law. The group gave the southern third of Minnesota a "C" because it said most of the waterways had modest protections.

Beginning in 2011, Blue Earth County and the the county Soil and Water Conservation District used a state grant and local funds to assess all protected streams and rivers in the county to see where required buffer strips were lacking.

"A majority of the county is in compliance," said George Leary, Blue Earth County land use administrator.

The county determined there were about 365 acres of land in the county that should be in buffers but were not.

The county notified 336 landowners who had shore land that appeared to be out of compliance. Of those, 227 landowners responded. The county said 89 parcels added buffers and are now in compliance, and another 53 landowners have pending projects to come into compliance.

Another 90 landowners said they were unsure if they would correct the buffer, and 109 property owners never contacted the county.

"Many were able to roll the (new buffer zones) into a conservation program, CRP or whatever," Leary said. That way landowners continue to own the land and no public access to the buffers is allowed, but they are also compensated for having the buffers.