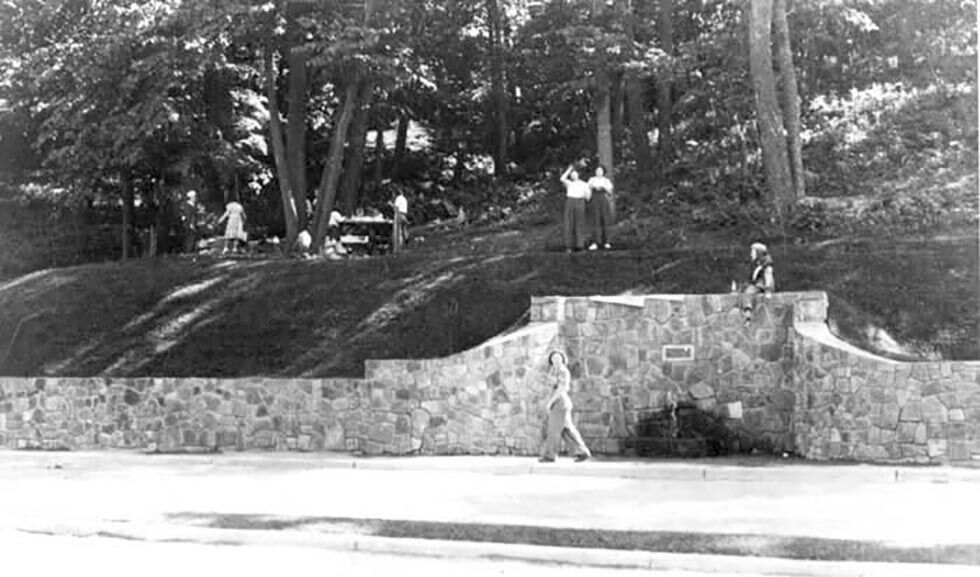 Picnickers enjoyed a wayside rest on Highway 14 near New Ulm shortly after it opened in 1939. Closed since the 1970s, MnDOT plans to repair and restore the overgrown site this summer. 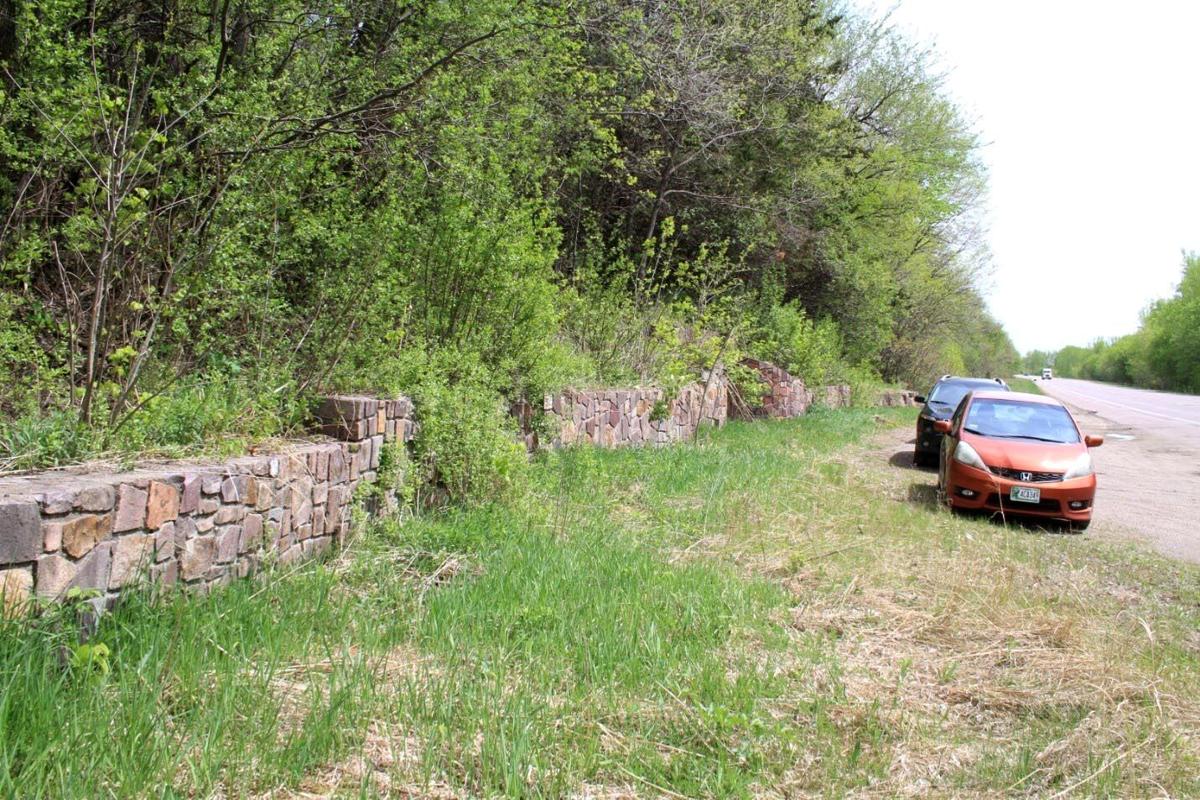 Now almost invisible due to a half-century of neglect, a Highway 14 wayside rest near New Ulm was designed by the landscape architect who helped create the grounds of the Glensheen mansion and was built by impoverished youth during the Great Depression. 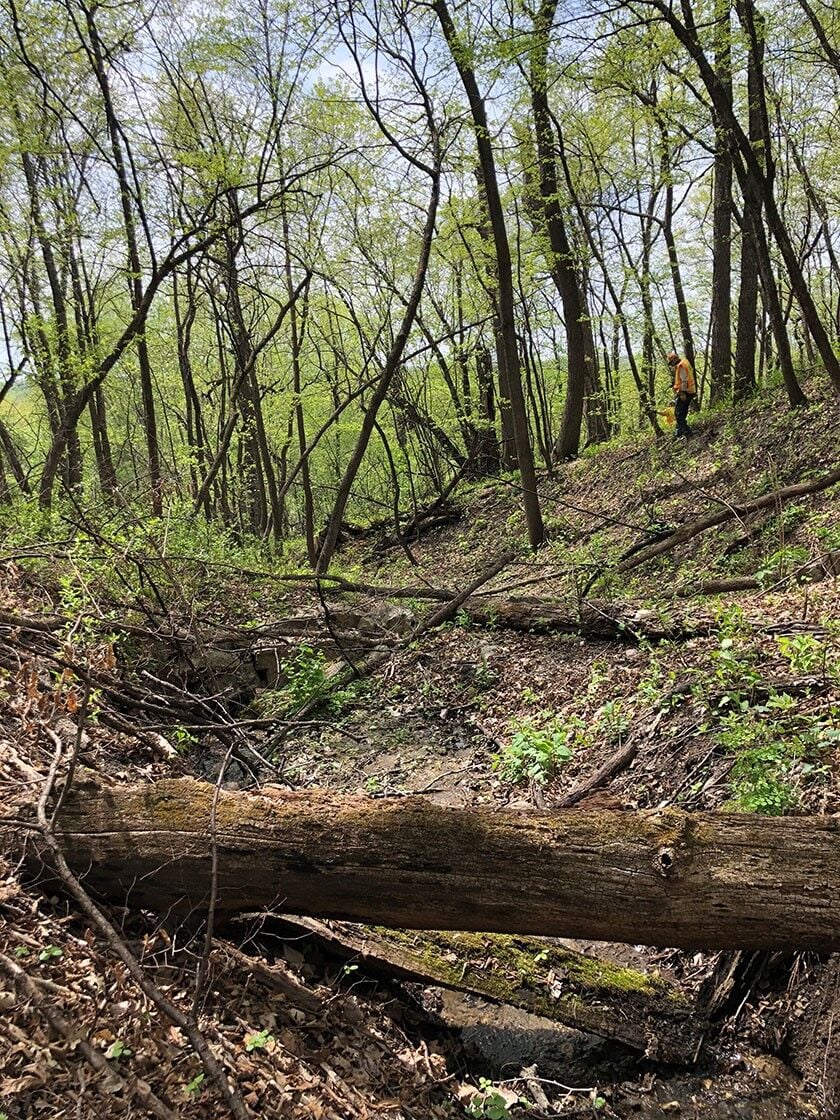 MnDOT workers have found remnants of a hillside picnic area that was part of a Highway 14 wayside rest area built through a Great Depression work program in 1938-39.

Picnickers enjoyed a wayside rest on Highway 14 near New Ulm shortly after it opened in 1939. Closed since the 1970s, MnDOT plans to repair and restore the overgrown site this summer.

Now almost invisible due to a half-century of neglect, a Highway 14 wayside rest near New Ulm was designed by the landscape architect who helped create the grounds of the Glensheen mansion and was built by impoverished youth during the Great Depression.

MnDOT workers have found remnants of a hillside picnic area that was part of a Highway 14 wayside rest area built through a Great Depression work program in 1938-39.

A long-abandoned roadside park — constructed by impoverished youth during the Great Depression and designed by one of Minnesota’s most famous landscape architects — is set to be resurrected this summer.

“I think people are really going to be surprised how beautifully it sticks out,” said Andrea Weber of the Minnesota Department of Transportation. “... I really hope that people rediscover it and appreciate having that place to see the river valley and hang out a little bit.”

The New Ulm Spring Wayside on U.S. Highway 14 between Courtland and New Ulm was closed in 1971. After 50 years of neglect, the 4.6-acre site is so overgrown it’s become almost invisible. That will start to change this week as tree removal begins, the first stage of a $950,000 restoration project that will include repairing the park’s signature quartzite wall and two stairways leading to hillside picnic spots.

A jewel in the rough

The wayside was constructed in 1938 and 1939, partly because thirsty tourists and other travelers were already pulling to the side of Highway 14 in that location to grab a drink from the natural spring that flowed from the towering quartzite outcropping known locally as “Old Redstone.”

“This spring is used to so great an extent by the traveler that parking at this point creates a traffic hazard,” according to an annual report in 1938 by the Minnesota Department of Highways. “A development is now under construction at this location which will give accessibility to the spring by construction of a turnout road where cars may park off the main highway. ... Picnicking facilities are being installed.”

The landscape architect who made the plans for the wayside was Arthur Nichols, who was the creative force behind some of Minnesota’s best-known outdoor spaces. The work was done by local youth age 16 to 25 as part of a work-training program under President Franklin Roosevelt’s New Deal.

When Weber, a landscape architect, visited the site in 2019 she was struck by how much of the original work remained beneath the foliage — and how beautiful the spot must have been.

“It’s just a really delightful place to be,” she said. “If you are able to ignore the traffic, I think people would really find it special.”

The signature element of the wayside was the curving wall of red quartzite, mined from just across Highway 14, with a flowing pipe tapping into the spring behind the wall.

“It’s a really rare stone and it’s the only structure that I’m aware of in the roadside properties that uses it,” Weber said.

Remnants of two stairways leading from the wall to the picnic area were also rediscovered, along with a couple of stone boxes that would have originally held grills for picnickers looking to cook over a fire. The hillside, which features a pair of small creeks, would have provided open views of the Minnesota River valley when the wayside opened in 1939.

“I love seeing jewels in the rough,” Weber said. “... I can imagine and envision what they can look like again and see their potential. That’s what I really love about my job — seeing the potential.”

Roosevelt expressed somewhat similar sentiments about tapping into the energy and potential talents of unemployed young people in America during the depths of the Great Depression.

The new program, though, would be open to girls and boys alike and would employ local youth rather than requiring them to move to camps at job sites hundreds of miles from their homes.

Roosevelt’s note said the program would provide numerous benefits for the youngsters: wages that would allow them to stay fed and avoid dropping out of school, job skills they could use throughout their lives, “and, above all, the prevention of the natural effects of long idleness and continued frustration.”

With so many experienced adults seeking work, employers had little incentive to retain or hire teenage workers: “The result was to swell the number of the hopeless young people looking for jobs, or just ‘hanging around’ on the street corners, or aimlessly wandering around the country ... who, in final desperation, had virtually become hoboes.”

Weber said she has discovered virtually nothing about the teenagers and young adults from the area who would have built the wayside after signing on with the National Youth Administration. If any 16-year-olds were on the crew, they would be approaching their 100th birthday, but Weber wonders if any children or grandchildren of those young workers might have heard stories they could pass on.

“I’d love to hear from them if people were aware of that kind of connection,” she said.

The one thing Weber knows is the kids did all right, particularly in their newly learned masonry skills.

“For the wall to be in that good of condition with basically no maintenance is just remarkable,” she said. “We’re still trying to figure out how they did it so well back then.”

The legacy of A.R. Nichols

If Weber was shocked at how well the masonry has withstood the elements, she wasn’t even mildly surprised that the wayside was elegantly designed. After all, the final plans had the signature of A.R. Nichols.

A self-described “landscape architecture nerd,” Weber said Nichols was a legendary figure in the field.

“He was one of the leading landscape architects in the country,” she said.

Nichols came to Minnesota from Massachusetts in 1908 to work on the landscaping of Chester Congdon’s newly constructed Glensheen mansion in Duluth. He later helped create the landscaped malls in front of the Minnesota Capitol and at the heart of the University of Minnesota’s East Bank campus, along with the “Lilac Way” series of roadside parks along Highway 100 in the Twin Cities.

“He did a lot of the state parks in Minnesota as well,” Weber said.

Nichols’ style is apparent even in the relatively simple New Ulm Spring Wayside, combining the use of local stones and materials in the “National Park Service Rustic Style” and tossing in some classical symmetrical features as he curved the wall into bays that led up the hillside, she said.

It wasn’t the design or the workmanship that doomed the wayside for 50 years, it was the water.

After persistent contamination in the spring water was discovered, MnDOT decided to not just remove the pipe but to close the entire wayside in August of 1971. A half-century later, it will reopen, although some of the changes of the intervening decades can’t be undone.

Highway 14 traffic has grown in volume — and in volume — since 1939, particularly in the size and number of trucks on that segment of roadway. So it won’t be as serene a rest area when it returns as it was originally.

And people who pull off at the restored wayside — unlike their grandparents during the Great Depression — will need to bring their own water. The spring remains unsafe to drink from.

“We looked into a couple of options for providing water, but they were just going to be very expensive,” Weber said.

They also rejected the idea of restoring the spring as a visual feature of the wayside. Even if there were signs warning people not to drink the water, there was too much risk that people might not heed the advisories.

“In our heart, we would have loved to do that,” Weber said of restoring the flow of water. “... We don’t want to make people sick.”