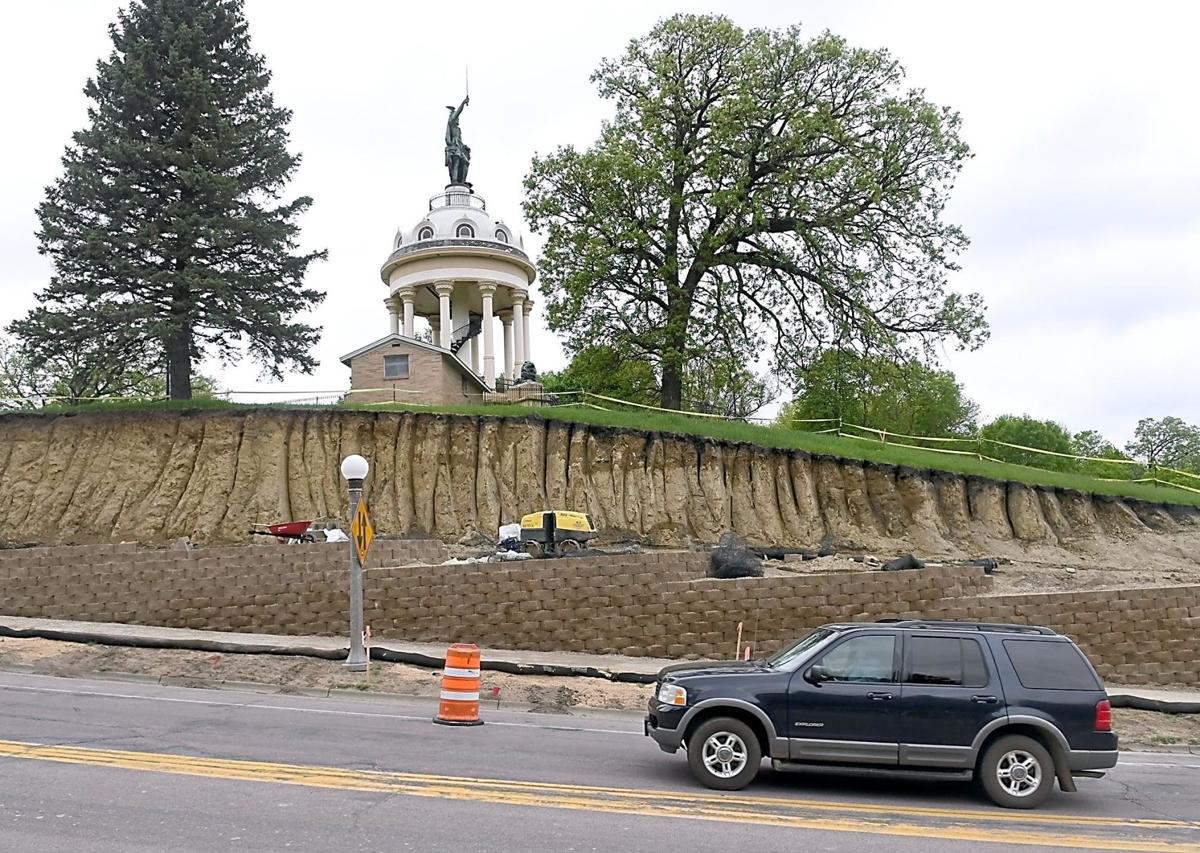 A new retaining wall was under construction in 2020 along New Ulm’s Center Street below the historic Hermann Monument. The town’s budget include maintenance and improvement projects for its historic landmarks as well as investments in building expansions and a new amphitheater. 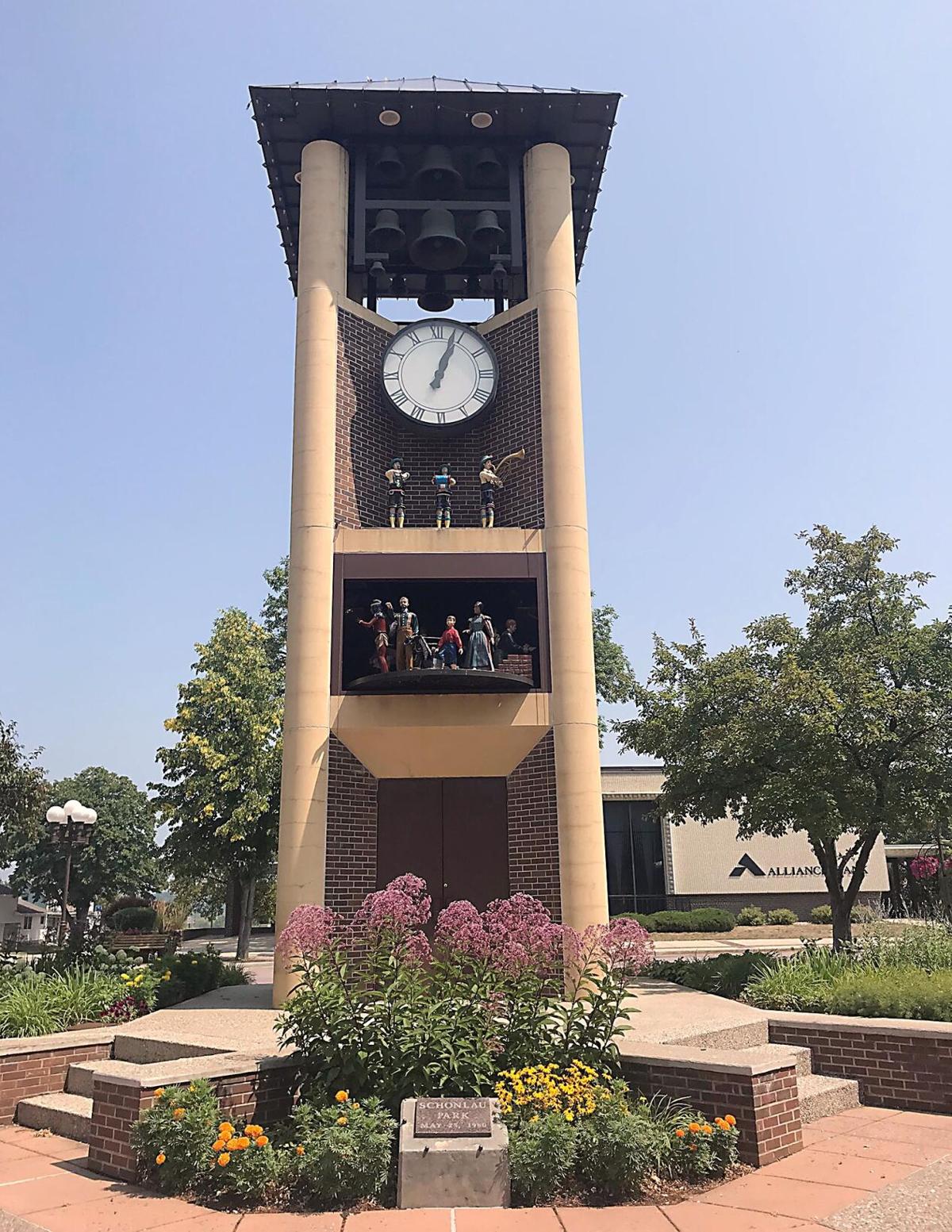 A New Ulm historic bell tower project was completed earlier this summer. The cost for the East Coast craftsman’s repairs to the glockenspiel and the replacement of its figures came in at around $210,000.

New Ulm has been boosting its tourism draw with new facilities, historic preservation projects and upgrades to its historic glockenspiel.

On a recent morning Park and Recreation Director Tom Schmitz met with inspectors at the site of a $15 million project, New Ulm’s newly-expanded rec center.

Earlier this year, Schmitz was in charge of finding someone to supply the elbow grease for sanding the scuffed-up staircase and floors in an 1861 house in the heart of downtown New Ulm.

The city owns the property at 220 N. Minnesota Street, which for the past three years has been leased by a New Ulm-based historical society.

The historic Kiesling House is a wood-framed structure that survived an attack on the town 159 years ago. Thanks to the cooperative effort, the building that serves as a little museum was ready for visitors. Its programming during a recent commemoration of the U.S.-Dakota War included a cannon demonstration by Civil War re-enactors.

“It’s a reflection of what they do,” said Brown County Historical Society Director Kathleen Backer, complimenting the efforts of Schmitz and his department.

“I’m of the mind that we take care of what we have before we go forward with new projects.

“Our city gets credit for caring for our excellent park system,” Backer said, citing recent amphitheater and baseball field projects. “The city also does an excellent job of providing due diligence, that for the Kiesling House has included new roofing and siding and interior work.”

One of the projects Schmitz has been keeping his eye on is repairs to a free-standing bell tower in a downtown green space and listed on the National Register of Historical Places. Over the past five years, the glockenspiel figurines have been replaced and the mechanisms that move the three-piece band, grain miller, beer drinker, brick mason, Dakota and pioneer figures repaired.

The 37-bell carillon “Glock” at Schonlau Park has long been on New Ulm Chamber of Commerce Visitor Center’s map of must-see sites. Tourists often plan their days around the times its doors open to reveal the figurines’ slow parade to music; a mini-pageant of area history.

“Its original figures were made of papier mache and they were falling apart. They’re now all fiberglass. The timing is still a little off; some of them aren’t animating properly,” Schmitz said.

Verdin and Christoph Pacaard, two companies specializing in clock tower repairs and electronic carillon bells, were enlisted for the project, which included switching the glockenspiel’s controls from analog to digital.

The glockenspiel project, with the exception of minor adjustments, was completed earlier this summer. Costs came in at around $210,000.

Five decades ago, the city took over ownership and maintenance for the “Hermann the German” monument site from its founding organization.

The 102-foot copper-sheet structure was erected in 1897 and placed on the National Register of Historical Places in 1973. Last year, tourists did not have access to the Hermann site during projects that included constructing a retaining wall and parking lot.

Crowds are expected to flock to the monument during 2021’s Hermannfest Sept. 11. Organizers canceled the 2020 celebration of the achievements of German-Americans, which would have been limited by coronavirus restrictions to 250 attendees.

The site has been enhanced by its recent improvements. But the Hermann monument itself, which allows its visitors a panoramic view of New Ulm and the surrounding valley, remains in need of substantial repairs.

“He’s still going to need a lot of work ... in the millions,” said Chamber President and CEO Michael Looft.

“One of the great things about New Ulm is that the city and the people always work to take care of our history,” he said.

Schmitz said the site’s interpretive center will not reopen until entire monument is restored.

“We anticipate that taking place within the next decade.

“The displays have been moved to the library. People can still go up to the top of Hermann; we do allow people to climb the 100 or so steps.”

New Ulm will be looking at project design and funding for perhaps the next five years, Schmitz said. When funding is obtained, the monument will be dismantled and rebuilt.

“That will take a couple of years, like it did when they worked on the Statue of Liberty,” Schmitz said.

Maintaining the monument and other landmarks is considered a worthwhile effort by the city and its residents. New Ulm counts on its older sites to consistently draw in thousands of tourists who are likely to spend money in town.

The new amphitheater in historic German Park and the town’s renovated baseball diamonds are already popular attractions, he said.

Schell’s Park is not operated by the city; however, during New Ulm’s many festivals, the family-owned historic brewery and its park are a boon to the local economy.

Looft said the city’s newest attractions, such as the new pool’s ninja-style rope course, also will be a regional draw. Visitors from miles around are expected in town when the expanded rec center and its state-of-the-art swimming pool open toward the end of September.

“... But that’s not to say they (the new attractions) will subtract from the importance of places like our German Park, the site of our original plotted park,” Looft said.