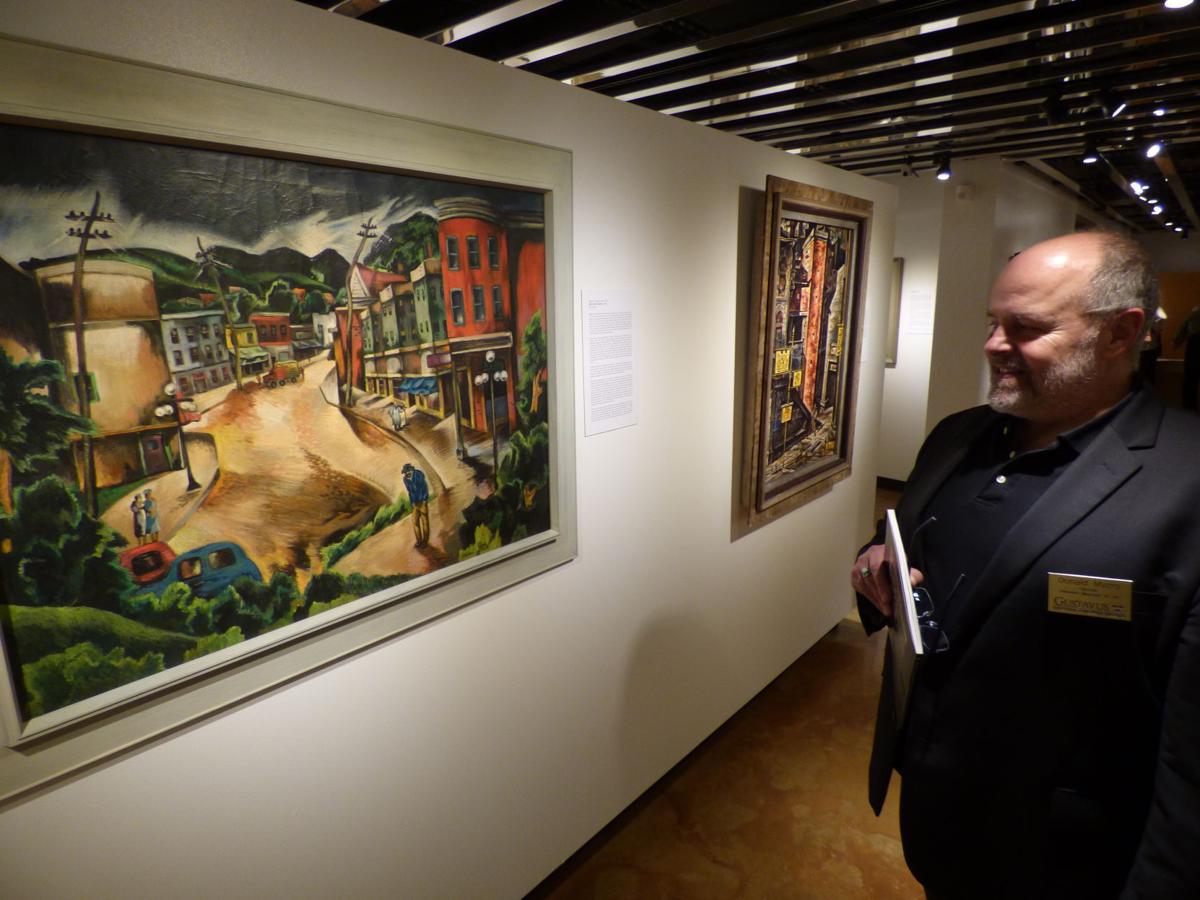 Donald Myers, director of the Hillstrom Museum of Art in St. Peter, admired the vivid colors of a William S. Schwartz painting Sunday at the exhibit, “Industry, Work, Society and Travails in the Depression Era.” 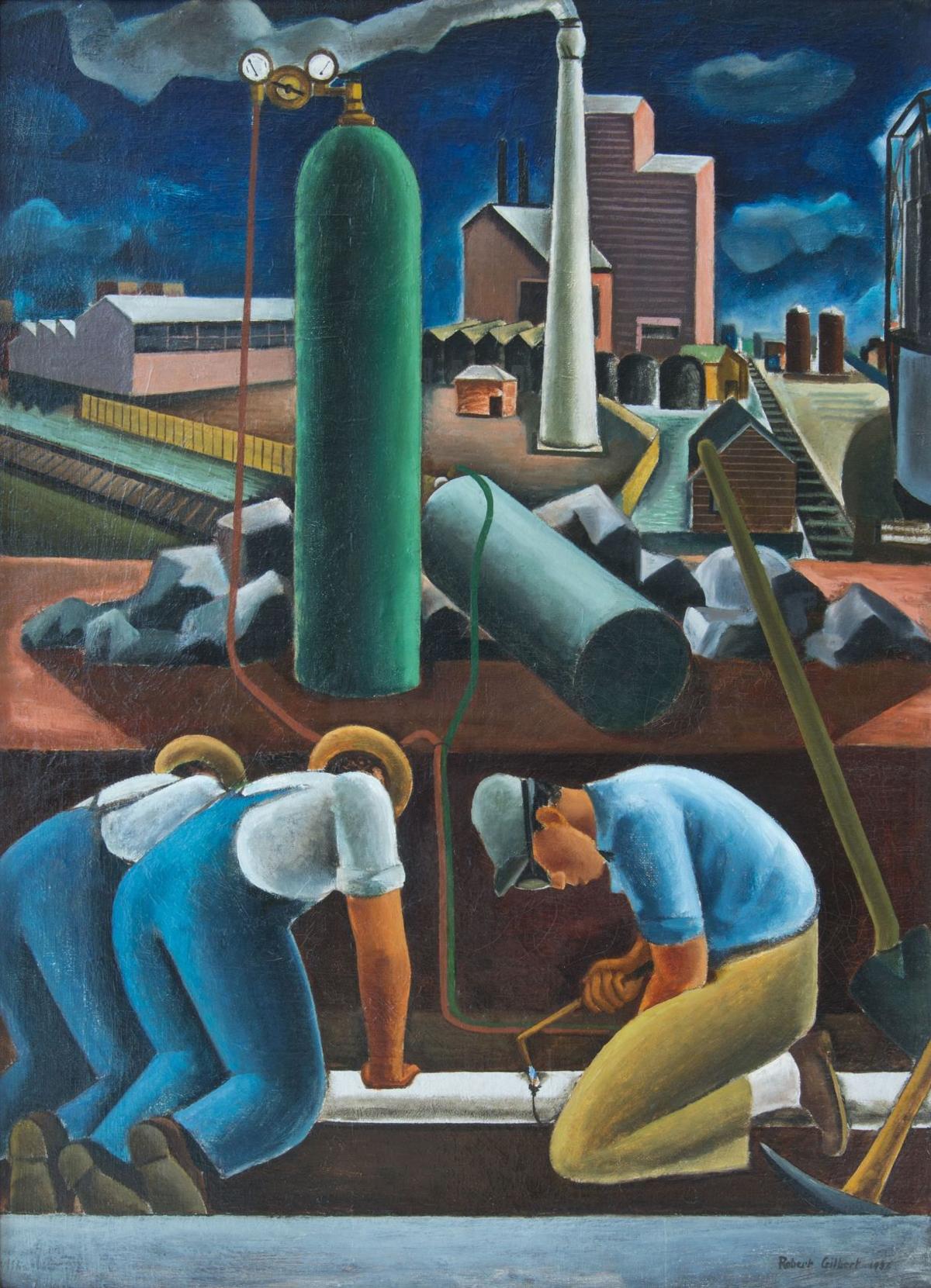 Robert Gilbert’s oil on canvas “Industrial Composition” is one of nearly 100 works in the exhibit “Industry, Work, Society and Travails in the Depression Era: American Paintings and Photographs” from the Shogren-Meyer Collection showing through Nov. 9 at Hillstrom Museum of Art, Gustavus Adolphus College. 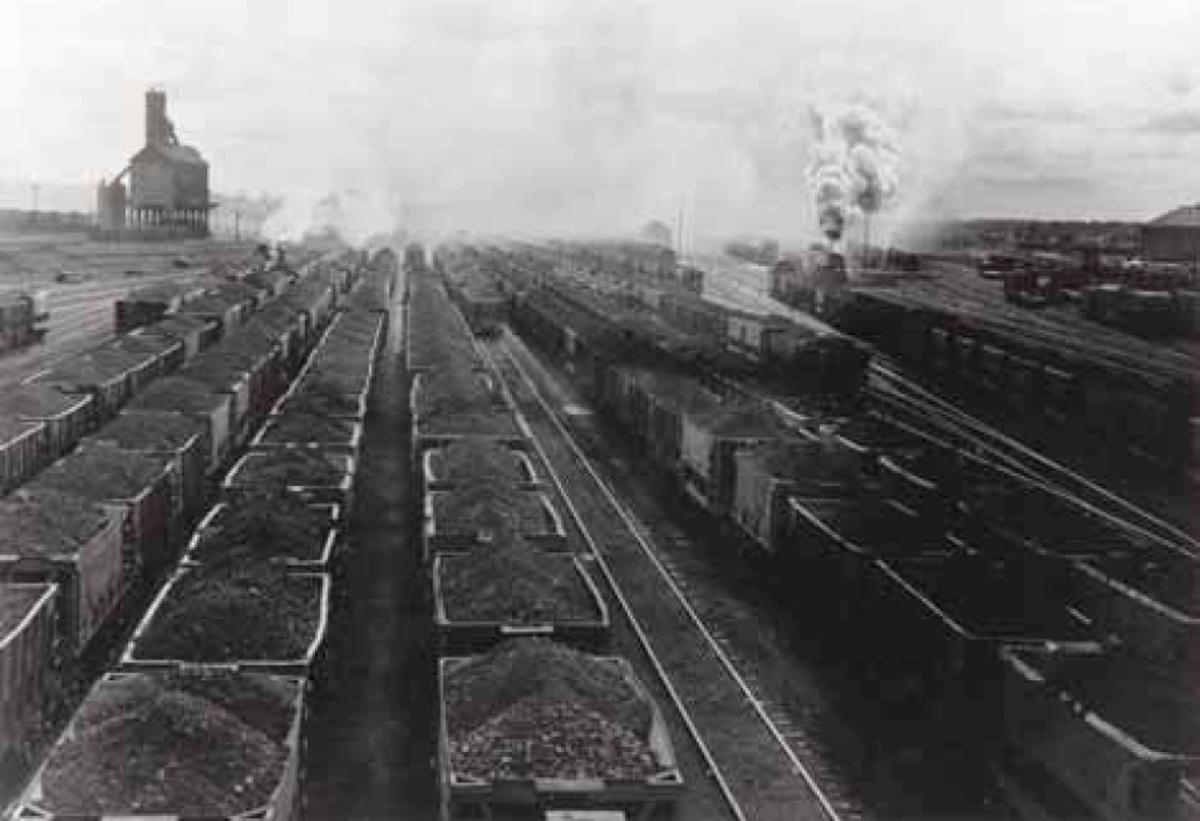 Donald Myers, director of the Hillstrom Museum of Art in St. Peter, admired the vivid colors of a William S. Schwartz painting Sunday at the exhibit, “Industry, Work, Society and Travails in the Depression Era.”

Robert Gilbert’s oil on canvas “Industrial Composition” is one of nearly 100 works in the exhibit “Industry, Work, Society and Travails in the Depression Era: American Paintings and Photographs” from the Shogren-Meyer Collection showing through Nov. 9 at Hillstrom Museum of Art, Gustavus Adolphus College.

(This modied version corrects the spelling of the name of the director of the Hillstrom Museum of Art, Donald Myers.)

History repeats itself, but it doesn’t always have to if we pay close attention and learn from the past.

That’s one of the main takeaways Minnesota-based art collectors Dan Shogren and his wife, Susan Meyer, hope visitors will consider when viewing the current exhibit of depression-era paintings and photographs at the Hillstrom Museum of Art in St. Peter.

When Shogren paid a visit to the museum a couple years ago, he and Donald Myers, director and chief curator of Hillstrom, realized their interests in art were aligned. When Shogren invited Myers to view his private collection, which features paintings and photographs from the 1920s through the ‘40s that delve into American life before, during and after the Great Depression, Myers immediately thought an exhibit at Hillstrom would be a perfect fit.

“October 29th of this year is the 90th anniversary of the crash of the stock market — which in some way at least led to the depression,” Myers said. “So it’s a timely looking back.”

The exhibit, “Industry, Work, Society and Travails in the Depression Era,” opened earlier this month and continues into November. Shogren led his second gallery talk on the exhibit Sunday afternoon, explaining the stories and significance behind the paintings, which include a half dozen Minnesota artists. Those artists include Wanda Gag, who grew up in New Ulm, and Lois Ireland, who resides in Hastings and is the only artist in the exhibit who is still alive.

Meyer and Shogren said their personal interest in artwork from that era began in college.

“A lot of it ties into the fact that both of us majored in history in college,” Meyer said. “So we studied this period and you can’t help but be impressed by the poverty people went through. You see some of the photographs and the paintings; the people lived with very little, but they somehow survived.”

There are a total of 96 works of art in the exhibit. About 40 of those are paintings and the rest are photographs. They depict industrial work environments lacking safety gear, children selling newspapers on the streets, breadlines, and the rural scenes from the dust bowl. A 1931 photograph of a Goodyear zeppelin is framed with the very material used to make the large airship.

Shogren said he hopes the images lead visitors to discuss not only the differences between that era, but also the similarities to the present. One such example is a 1949 painting of a mine in Minnesota’s Iron Range by artist Tom Dietrich, a Wisconsin native.

“If you go up to Northern Minnesota you’re still going to see an open-pit mine with trucks working in it that was there 80-100 years ago,” Shogren said.

While work itself, whether on an assembly line or in agriculture, has in some cases remained the same, there are vast differences, especially when it comes to technology.

Meyer's father was a farmer, and in the mid-1930s, he had a team of horses and a single bottom plow.

“Today we have these mega tractors with air conditioning and televisions,” Shogren said. “They plow practically a third of a field at one time.”

Myers said there are parallels between the issues related to climate change we face today and the dust bowl, which is the focus of a number of the paintings and photographs in the exhibit.

“I think that can arguably be called a mini example of what can be done to the earth, to climate,” Myers said. “You didn’t have many dust storms until the dust bowl happened and that’s because of the way plowing was done — over plowing. I think that has a consonance with what we’re seeing today with wild weather.”

While the Great Depression dominated the 1930s, Shogren and Meyer made a point of including works from the 1920s and the 1940s, to examine the causes that led to the fall of the economy all the way up to the jobs that put many people back to work during World War II.

“In the ‘30s, things changed and we were able to come back,” Shogren said. “In the agriculture industry, we put in crop rotation, no-till farming, leaving some fields fallow for a year. The collection in some cases can be interpreted to look at those things and take advantage of the message there.”

He said he hopes the exhibit will lead to problem solving discussions and a renewed understanding of how the mistakes of the past can be transformed into lessons we can apply today.

“If we learn through our history, then we don’t repeat our history,” Shogren said. “That’s what we were thinking of.”

Dan Greenwood is a Free Press staff writer. Contact him at dangreenwoodreporter@gmail.com