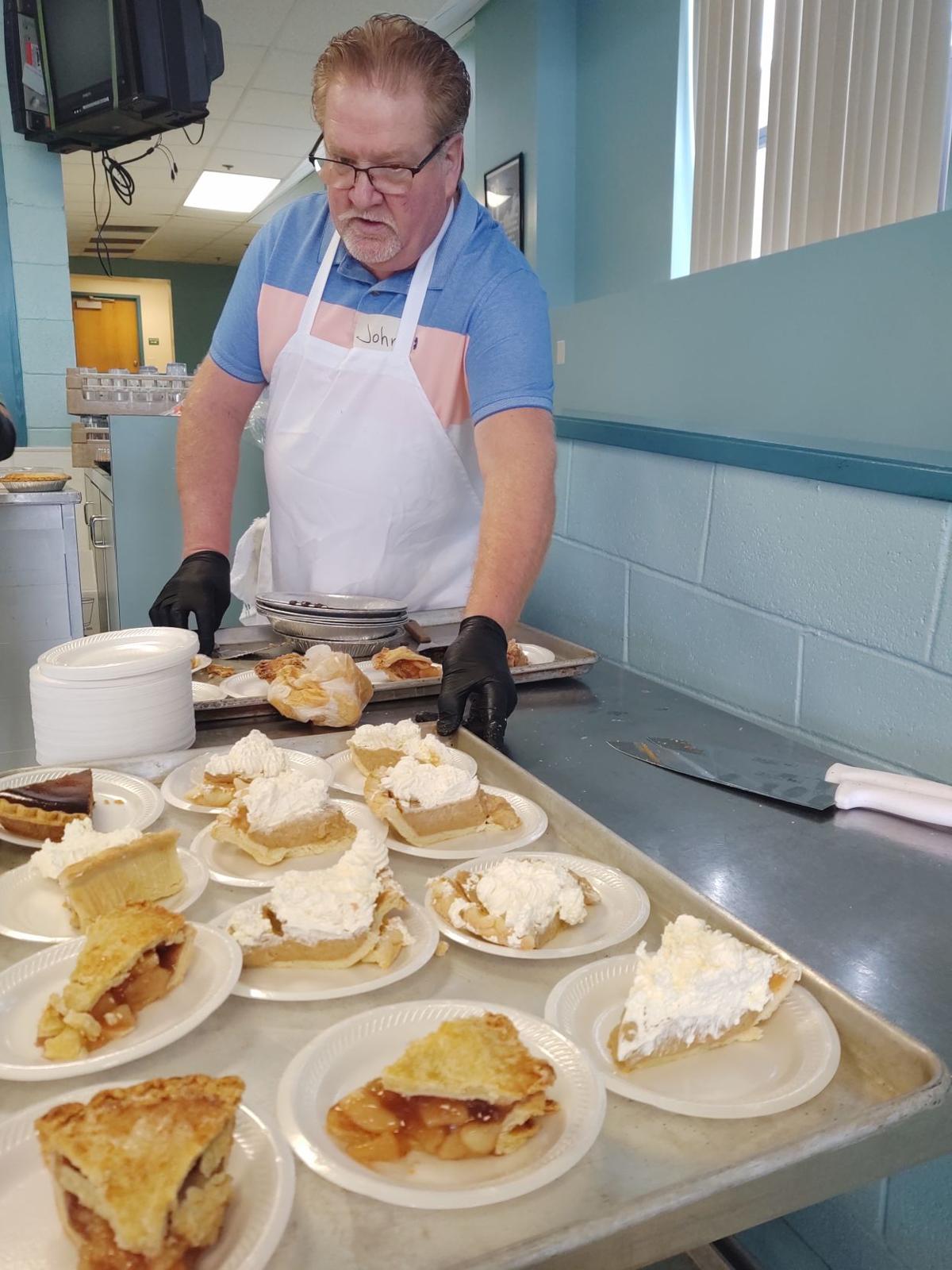 John Love dishes up pie at the Salvation Army during the Elks Lodge annual Thanksgiving meal. 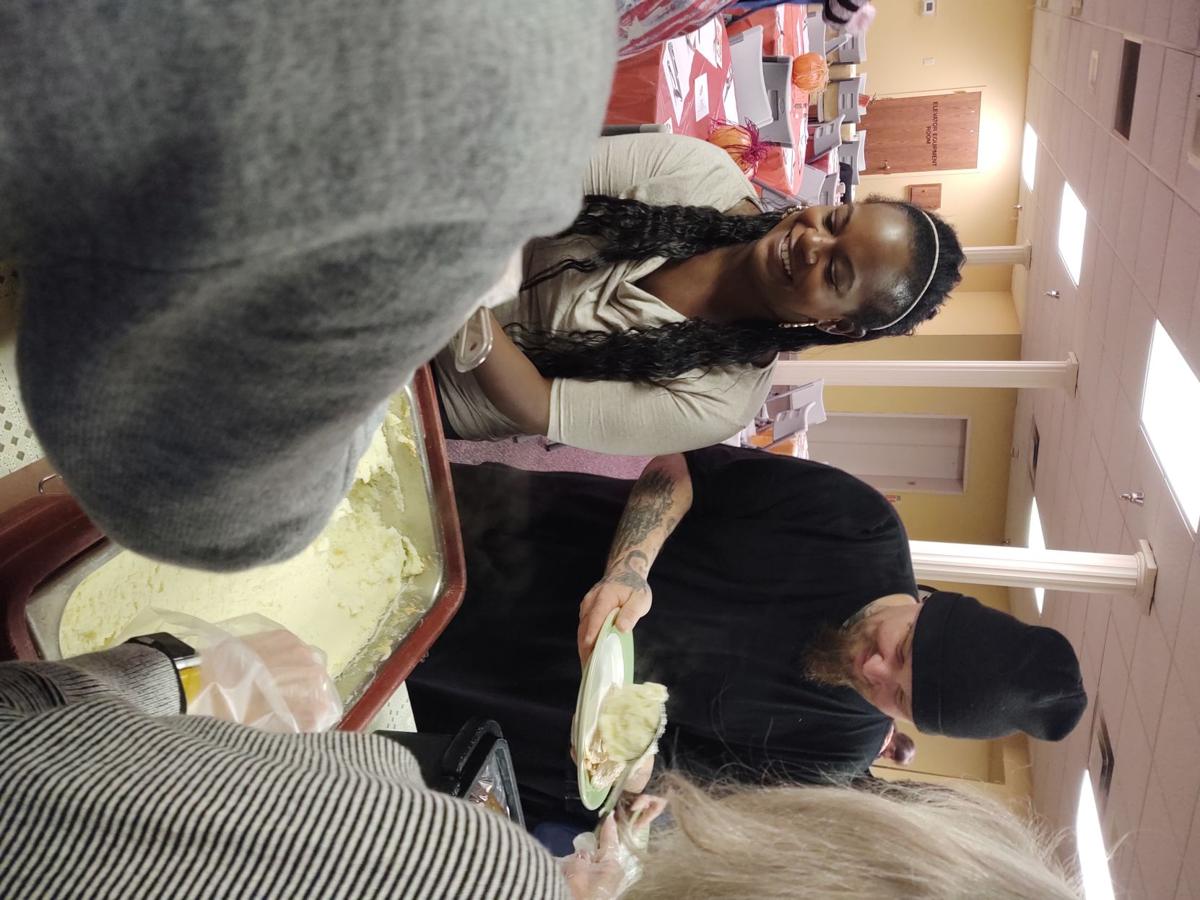 Ariel and Adam Hartnell go through the line at the First Presbyterian Church Thanksgiving meal Thursday.

John Love dishes up pie at the Salvation Army during the Elks Lodge annual Thanksgiving meal.

Ariel and Adam Hartnell go through the line at the First Presbyterian Church Thanksgiving meal Thursday.

Ariel and Adam Hartnell said getting some extra food and some fellowship drew them to First Presbyterian Church Thursday for the church’s annual holiday meal.

“It’s a little extra food. We got our turkey from ECHO (food shelf) but we want to save that,” said Ariel.

The couple moved from St. Paul two years ago. “We decided to get away from all the hustle and bustle and drama,” said Adam, who is on disability.

They lived in their car for a couple of weeks before finding a basement apartment they could afford to rent. Recently they got into Section 8 housing to be able to move into Riverbluff Apartments.

“This is a wonderful community. There are a lot of resources. The people are great here,” Ariel said.

Andy Conn, of the Mankato Elks Lodge, said they box up and deliver about 250 meals and serve another 250 at the Salvation Army.

“JD Truffles does the food for us and we take it to the Salvation Army and box it up and deliver it,” Conn said of the traditional meal of turkey, mashed potatoes, gravy, cranberry sauce and pie.

Conn said those who come to the meals include the homeless who frequent the Salvation Army as well as people who don’t have family members nearby.

“If you don’t have someone to celebrate with they come down and meet new friends. It’s open to anyone.”

Conn said finding volunteers to help is never a problem. “We have about 50 volunteers, about a dozen Elks and the rest from the community. We usually have more volunteers than we need, which is a great problem.”

Dave Norris, exalted ruler of the Elks, smiled as he looked at tables piled with bread, bagels, muffins and other baked goods, an extra benefit the Elks got this year thanks to the Wednesday snowstorm.

“Panera and the grocery store bakeries donate to the Salvation Army, but they had a lot of extra baked goods because of the snowstorm.”

Norris said Dave Dorland of JD Truffles provides the rest of the food at cost.

John Love was helping dish up pies, joined by his girlfriend Jennifer and her brother Jim Prybylla, who were also volunteering.

Amy Luethmers was volunteering with husband Steve, son Isaac, 14, and daughter Amelia, 7. It was their second year helping out.

“The kids were excited to come,” she said.

For the Rev. Lindsay Conrad, of First Presbyterian, this was her first experience with the long-running holiday meal.

The churches also get their meals catered by JD Truffles, with church members and other volunteers donating pies.

They get about 25 to 30 volunteers and church members donate the money for the dinner.

“The youth group made our cranberry sauce. Volunteers come in earlier in the week and set things up and folks help prepare the meal and clean up afterwards.”

They usually serve about 125 meals at the church.

Conrad said the churches work with social service groups that run MY Place, Holy Grounds and Connections Shelter to get the word out ahead of time about the free meal.

“It’s for anyone who wants a meal. It’s people who maybe don’t make a meal for themselves anymore,” she said.