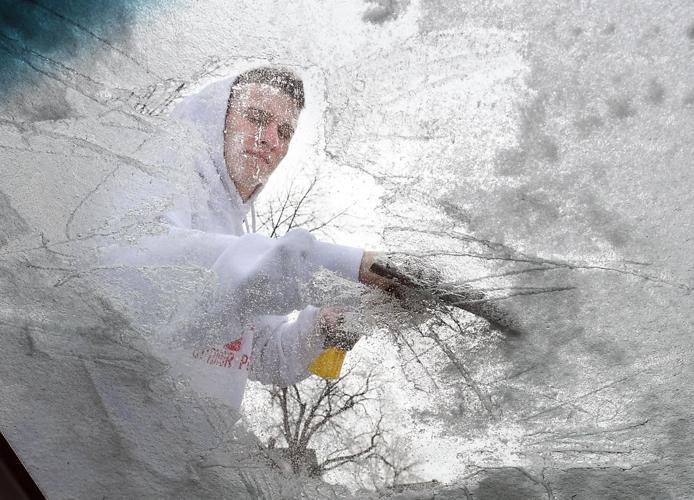 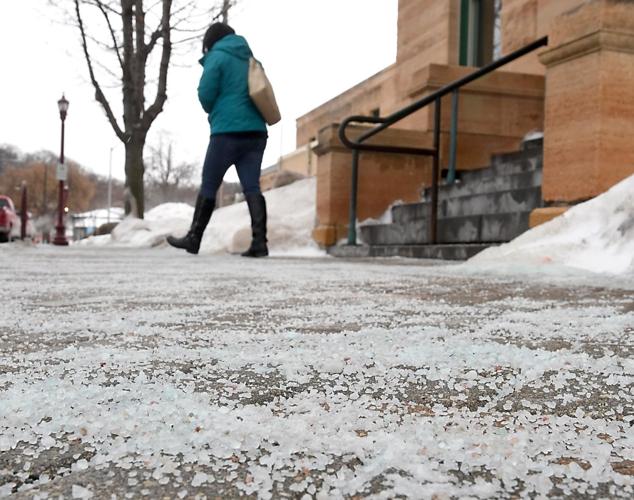 A healty layer of salt helps a visitor to the Mankato downtown post office traction as she heads to her car Monday. Photo by Pat Christman

A healty layer of salt helps a visitor to the Mankato downtown post office traction as she heads to her car Monday. Photo by Pat Christman

A 44-year-old Mankato man died in a car-pickup crash Monday afternoon between Mankato and Eagle Lake.

Weather and icy road conditions were factors in the crash. The sheriff's office said the crash happened at an undivided straightaway and the car apparently crossed into the oncoming lane of traffic.

The driver of the pickup, Neil Grunzke, 62, of Wells, was not injured.

The Minnesota Department of Transportation said most all roads in south central Minnesota were completely ice covered Monday morning. Progress in melting was made, particularly on highways east of Mankato, but it was slowed by plunging temperatures during the day.

Many area schools had two-hour late starts, although Mankato and St. Peter schools were on time.

Temperatures, which were in the upper 20s just after midnight, fell to 5 degrees by 7 a.m. and didn't rise any higher throughout Monday. The wind also picked up, gusting to 30 mph or more throughout the morning and afternoon.

Into Monday, slippery sidewalks made for treacherous footing for pedestrians. Mayo Clinic Health System in Mankato's emergency department had 20 patients report injuries after falls over the last 48 hours.

Road crews were busy once again after dealing with a heavy snowfall a week ago followed by drifting and some of the coldest temperatures of this century.

"My wife woke me up and said 'I think it's raining,'" Mankato Public Works Director Jeff Johnson said.

It was, and quickly became freezing rain.

Trucks were spraying brine on Mankato streets Sunday afternoon in anticipation of overnight freezing, but that effort was largely for naught.

"Any product we had out yesterday prior to that (rain) went by the wayside," Johnson said.

So crews were back out after 10 p.m. treating the major routes in town with a special focus on the hillsides, using a combination of salt and crushed rock. More trucks were out after 2 a.m. to prepare for the morning commute. While the ensuing single-digit temperatures reduced the effectiveness of the chemicals, major streets started to dry out.

"I think we've been lucky," Johnson said. "We had a little bit of sun today, which helped out. ... I know all the major routes are in good shape."

In rural areas, MnDOT was dealing not only with the freezing rain and falling temperatures but also a wind speeds that rose significantly after 3 a.m.

Trucks were scraping roads and spraying brine overnight and throughout the day Monday, but the single-digit temperatures made progress difficult.

"The roads have difficulty drying out before they refreeze and that's the big challenge right now," Falgren said. "... If we would have been in the 20s, we'd probably be seeing a lot of dry roads in the region."

With the windy conditions, blowing snow sticks to any melting ice on the roads, making more ice, he said: "So it becomes kind of a circular battle."

And more inclement weather is on the way.The week will feature two more rounds of accumulating snow with another forecast for the beginning of next week. The first will push through Tuesday and early Tuesday evening, with 2 to 4 inches likely.

The second round will come in late Wednesday and continue into Thursday evening, with another 3 to 7 inches possible. Temperatures are predicted to plummet to -9 by Friday morning with wind chills dropping to -32. The expected high on Friday is -2.

The overnight low Friday night could drop to -17, and continuous below-zero wind chills are expected from Thursday morning through Saturday afternoon. Although temperatures are supposed to rebound into the 20s on Sunday, that's also when the next round of accumulating snow is expected to arrive, according to the National Weather Service.