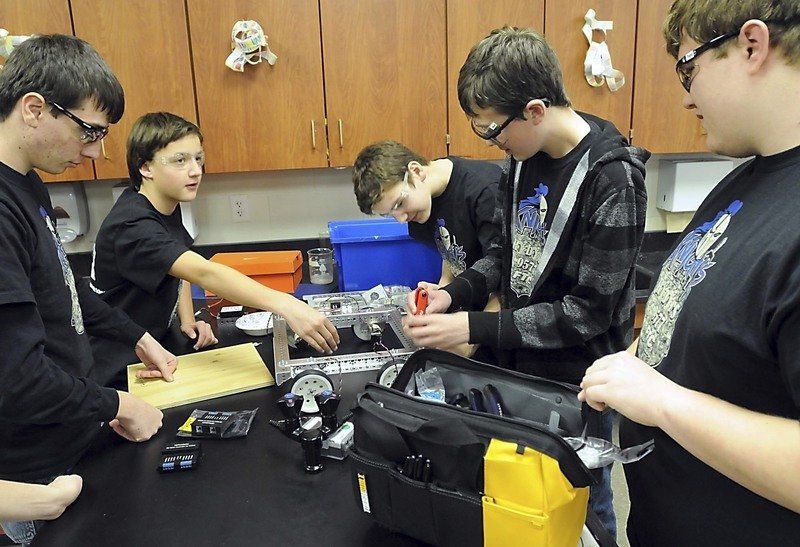 Students from Lake Crystal Wellcome Memorial's secondary school work on the small robot that won them fourth place in a FIRST Tech Challenge in Bloomington. This is the newly formed Knights Robotics 9577 team's first season. Photo by Pat Christman 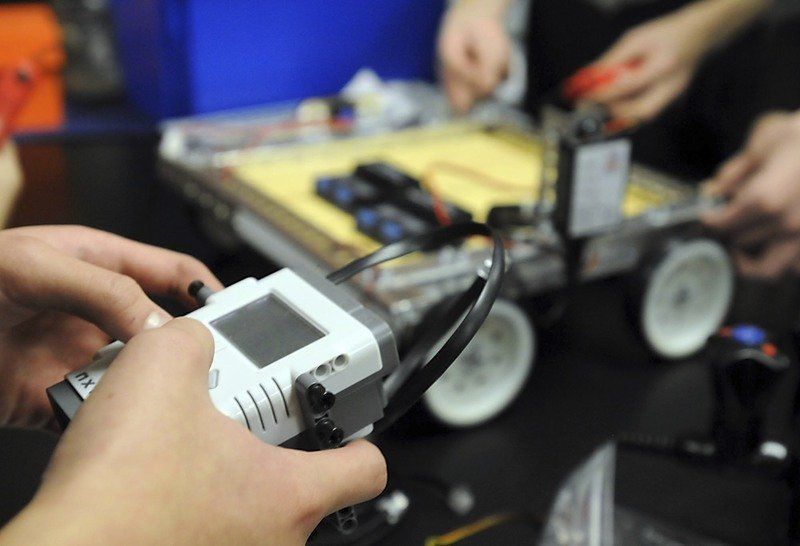 Students on LCWM's new robotics team work on the small remote-controlled robot that won them fourth place during a recent FIRST Tech Challenge tournament in Bloomington. Photo by Pat Christman

Students from Lake Crystal Wellcome Memorial's secondary school work on the small robot that won them fourth place in a FIRST Tech Challenge in Bloomington. This is the newly formed Knights Robotics 9577 team's first season. Photo by Pat Christman

Students on LCWM's new robotics team work on the small remote-controlled robot that won them fourth place during a recent FIRST Tech Challenge tournament in Bloomington. Photo by Pat Christman

They want to inspire young minds, the boys say. It didn't seem to matter that they're still pretty young themselves.

“Technology is the future,” LCWM senior Tyler Barnard chipped in.

Technology and mechatronics — a combination of mechanical, electrical, telecommunications and computer engineering — form the foundation of America's future economy, he said. Building robots has taught the students more about both, equipping them with the basic skills needed to pursue a career or education in either field.

Previously part of the large St. Peter-based FIRST robotics team Nordic Storm, all three boys have been inspired to do just that.

“I wanted to be an astronaut before I joined the team,” LCWM senior Lucas Rynearson said. “Now I want to study mechatronics.”

“I had a really good experience on that other team and got a lot of good skills,” Banard said. “It set me on a career path.”

“It's taught me a lot,” Brocker said.

And now it's time to teach, he said. Brocker, Barnard and Rynerason all decided late last year to do whatever it took to inspire the school's younger seventh- and eighth-graders to explore robotics, even if it took starting their own FIRST robotics team.

“It's really meant to be a feeder team,” said one of their mentors, Lynn Rynearson. “It feeds into the bigger Nordic Storm team, which is only open to ninth-graders and up...This is a Lake Crystal school team.”

(FIRST is a nonprofit that organizes programs, competitions and events with the goal of inspiring young people to pursue careers in science, technology, engineering and math.)

Lake Crystal’s new team, called Knights Robotics 9577, is open to students in grades 7-12. It competes in the FIRST Tech Challenge, during which students build smaller robots out of parts provided in a reusable kit.

Not only does it cost less to compete in the FIRST Tech Challenges, it takes less time and fewer technical skills, said Lynn Rynearson. It's a more scalable model, easier to implement by an individual school district.

“It gives us some more flexibility,” she said.

The team, which started competing this fall, is sponsored by the LCWM school district, All American Chem-Dry, the North Mankato American Legion and the Nordic Storm team. Science teachers Ben Meacham and Janelle Campeau let the kids practice in their rooms after school and provide support.

Ivy Lewis represents the North Mankato American Legion and serves as the team's lead mentor. She helped raise enough money to get the team started — $4,000 — and helped the kids prepare for their first competition. In the future, the program should take only $2,500 to operate per season, she said.

On the Legion's part, she said the investment is well worth it.

“Part of what (the Legion) has said we needed to do is provide robotics opportunities for more kids,” Lewis said. “And smaller, rural schools have a hard time starting teams."

Lewis has seen firsthand how positive of an experience being on a robotics team can be. Her daughter was part of Kato Public Charter School's original FIRST team, since incorporated into Nordic Storm.

“The difference in her was really cool,” Lewis said. “I could see her become more confident. She learned so much.”

She's seen the same growth from members on the new Lake Crystal Team. There are 11 students in Knights Robotics, she said, from all different grades.

Only given three weeks to build a robot this year because the team was formed a bit late, they rallied together and produced a working product. In their very first tournament in Bloomington, the rookie Knights took fourth place, blowing away not only their mentors, but the competition.

“We literally built the practice chassis from a book and added an arm to go to competition with it,” Lewis said laughing. “But at the competition they adapted. They did what they could to score ... We found our strengths. The kids worked together as a team and figured it out.”