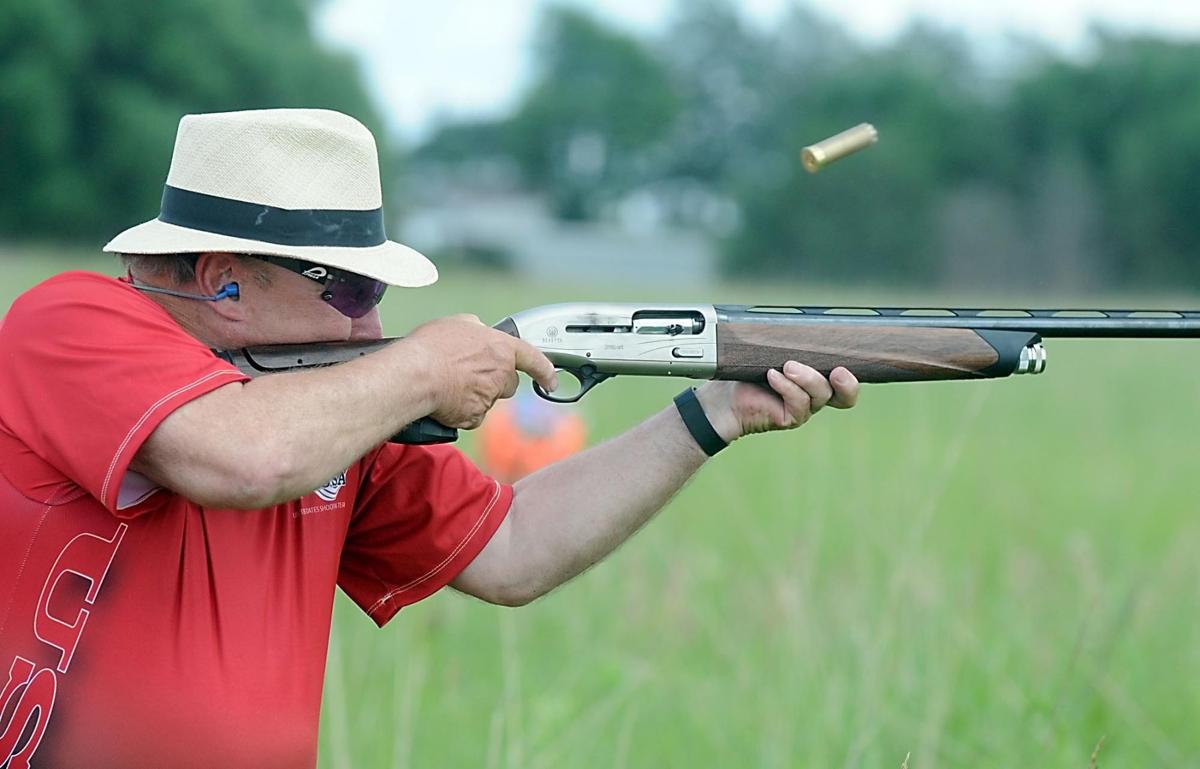 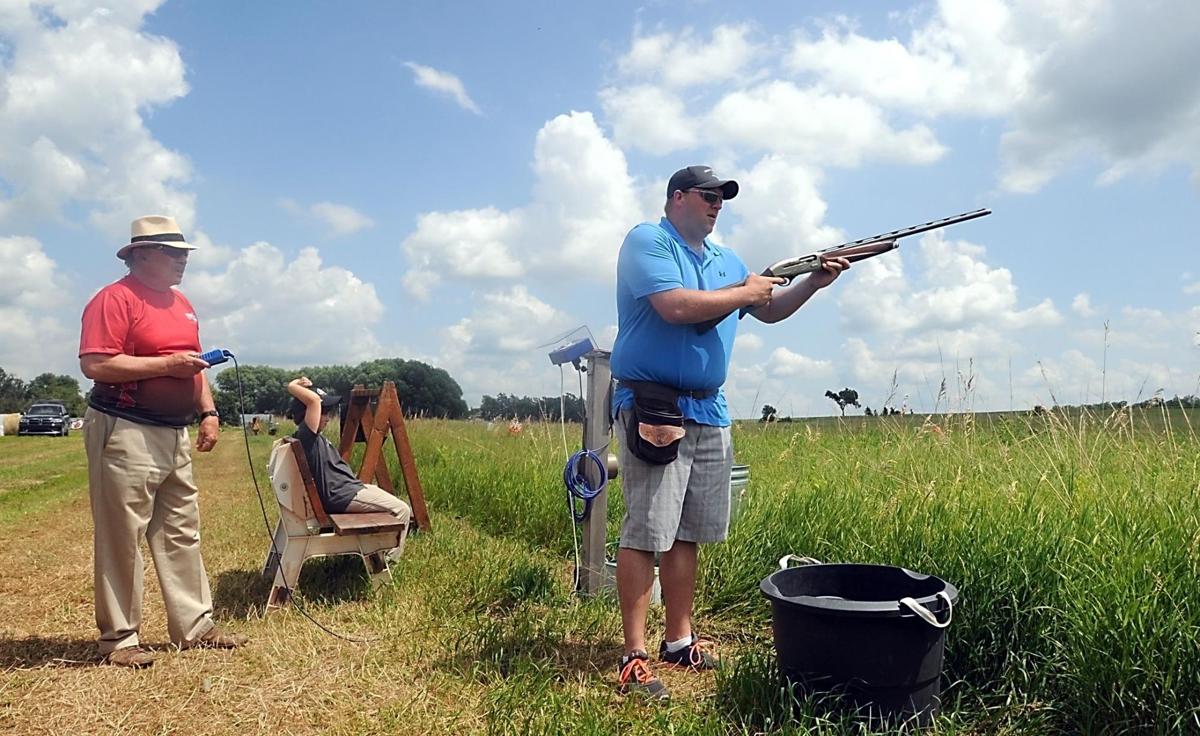 LE SUEUR — Over the next two weekends, many of the best clay shooters in the country and the world will gather here to compete in a challenging discipline of shooting.

“There are 150 different birds instead of 40,” said Michael Taylor, a previous World Cup champion who will compete in the super veteran division.

That variety adds unpredictability and more of a challenge, as shooters must be skilled at hitting clay pigeons in flights resembling several types of birds, such as teal or pheasant, or a rabbit bouncing along the ground.

Referees judge whether competitors have raised their gun too soon and keep score. After two warnings, shooters can lose credit for hitting a clay pigeon.

Up first for Taylor and about 480 other shotgun shooters is a Grand Prix World Cup, where they will go through 8 routes of 25 targets each, known as parcours, in three days. That event runs Friday through Sunday.

The FITASC World Championship will follow on July 23 through July 26, when shooters will again go through 8 parcours, but over four days. Anyone can sign up to participate in the events, but only 16 from each country are on the national team. The national teams compete for team medals and all participants compete for the overall medals and division medals.

England has long been the dominant force in the sport, as it started there, said event spokeswoman Judy Morris.

“But the U.S. is now truly a force,” she said. “That’s happened over the last five years.”

Italy and Australia are also teams to watch, she said.

The first American to win the world championship, Gregg Wolf, of Jordan, Minnesota, will compete in both events in Le Sueur. He won 11 years ago in Signes, France, as a 20-year-old, besting other competitors for the overall title and the junior division title. He was the first from the junior division to win overall.

He and Taylor are both members of the national team. They said there are some big differences between competing in the U.S. and elsewhere.

“It’s nice to sleep in your own bed for once,” Wolf said.

They will use golf carts around the Caribou course and have bottled water sitting in ice at each station. Next year, when the competition is in Italy, they’ll have to hoof it to each station and carry the water they need and a three-legged stool if they want to sit.

When the groups of five or six competitors are shooting, they are generally “really professional,” Wolf said, not making comments or talking.

Spectators would need ear and eye protection and should expect to be quiet while competitors shoot.

But as they come off the course, Taylor said, “A few in the older division are wiser about getting under other people’s skin by saying, ‘That was the hardest course I’ve ever seen,’ or ‘That was great -- I shot a 24!’”

The U.S. gets the chance to host the world championship, which will be the 37th, only every four or five years.

An Olympic-style opening ceremonies will be July 22 at the Verizon Wireless Center and will feature the teams from 26 counties, plus a lumberjack show and the Govenaires Drum and Bugle Corps. There will be about 800 competitors from more than 30 countries at the World Championship. Organizers said the event will bring about $2 million into the regional economy.

Chris Willaert, Mankato Sports Commission director, said the event will be great for the region and could help Mankato attract other large sports competitions.

“If somebody’s sitting in a restaurant and hears an accent they’ve never heard before, they should welcome the people and say, ‘Hi,’ to them,” he said. “The more people that we reach and the more welcome we can make people feel, the more positive we can make the event for everyone.”

Willaert encouraged residents in the region to turn out for the opening ceremonies.

“I have a passion for shooting and for the people,” he said.

Voss has been on the board of the National Sporting Clays Association, the national governing organization, for 10 years, he said, and when this year became available for a new host after another country backed out, he submitted a bid.

Voss’s father, Earl, started the club in 1953, a year after he contracted polio. Earl Voss still comes to the club every day, Randy Voss said. He started helping at the club when he was 7, and learned to love shooting. He was on the U.S. Army Marksmanship Unit for three years, including when the team won a gold medal in Seoul, South Korea, in 1978. But when the U.S. decided to boycott the 1980 Olympics in Moscow, his shooting career ended.

In between the two competitions, he will reset the entire course. Over the two weekends, the competitors will fire at more than 700,000 targets.

“No one’s done back-to-back events like this before,” he said.

At the gun club, many shotgun, accessory and shot vendors will show their goods. Professional gunsmiths and gun fitters will be there, too, to help competitors and visitors. With both events and the July 24 trick and clay shooting show, Voss invites locals to see the best shooters in the world.

“You can see what really good people can do with guns,” he said.

All events are free and open to the public. For more information, see http://www.worldfitasc.com/ or http://visitgreatermankato.com/mankato/whats-hot/fitasc/

It is a type of sporting clays competition in which shooters go to three to five stations and shoot 25 clays, coming alone or two at a time.

How is it different from other sporting clays formats?

The clays go in a greater variety of routes and speeds than in trap or skeet, including rolling along the ground. Also unlike trap shooting, the shooters must keep their shotgun unmounted until they see the target. Referees monitor the shooters.

What does FITASC stand for?

How will the competitions in Le Sueur be scored?

In both, each competitor will shoot 200 targets. The shooters are divided among groups of juniors, men under age 21; seniors, men between 22 and 55; veterans, men from 55 to 65; super veterans, men over 65, and ladies. The competitors, regardless of divisions, are grouped in squads of five or six to shoot.

For more information on the sport, see http://www.fitasc.com/

LE SUEUR — Desirae Edmunds was only 14 years old when she fired her first shotgun. From Anchorage, Alaska, she said the thrill was enough for …