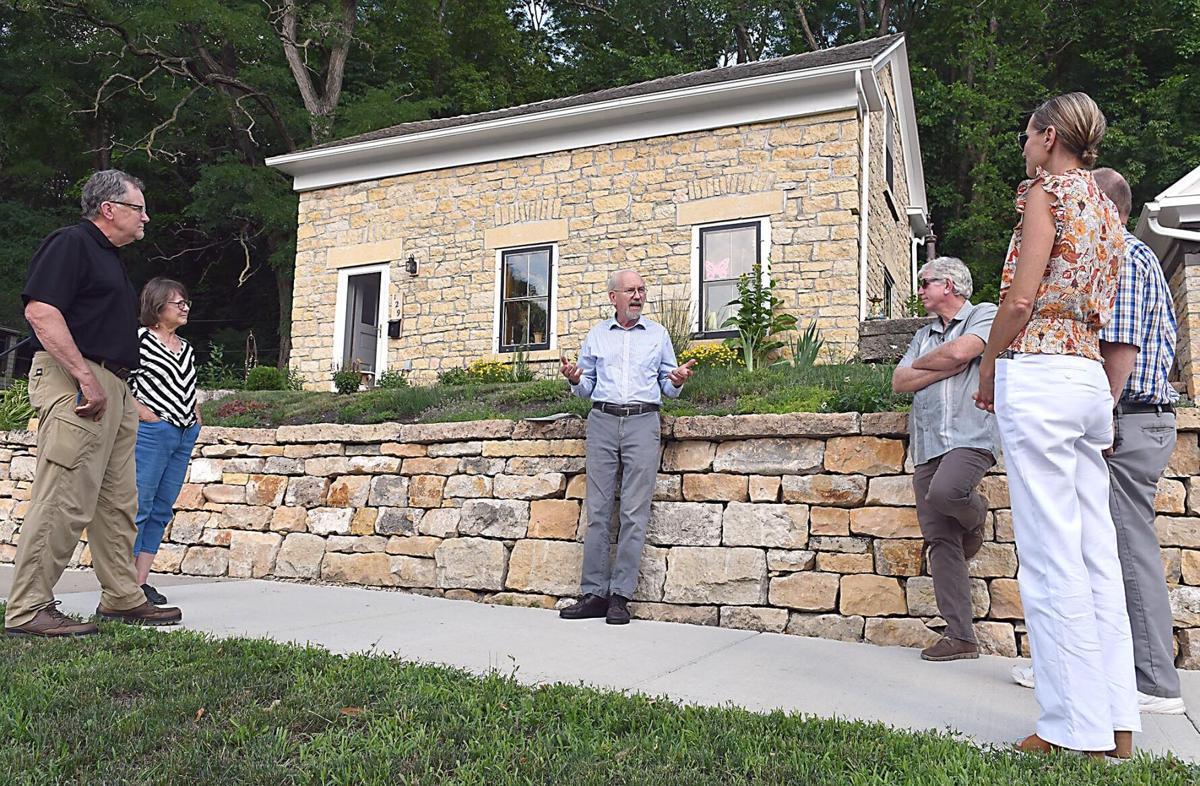 Local historic preservationist Tom Hagen tells the Mankato Heritage Preservation Committee the story of the oldest home in the city that’s still at its original location on North Sixth Street. 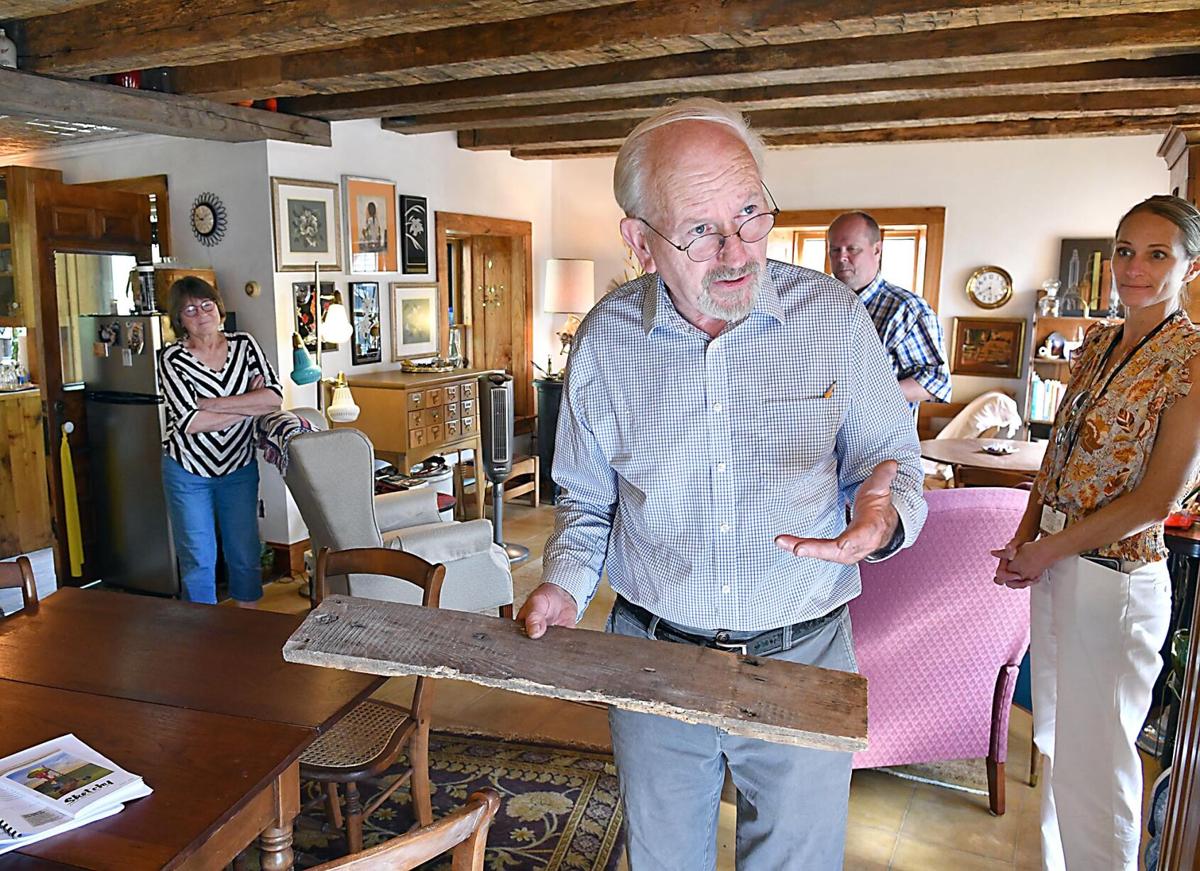 Tom Hagen holds one of the ash boards that was placed at the base of the stone house, in lieu of a foundation, during its 1858 construction. 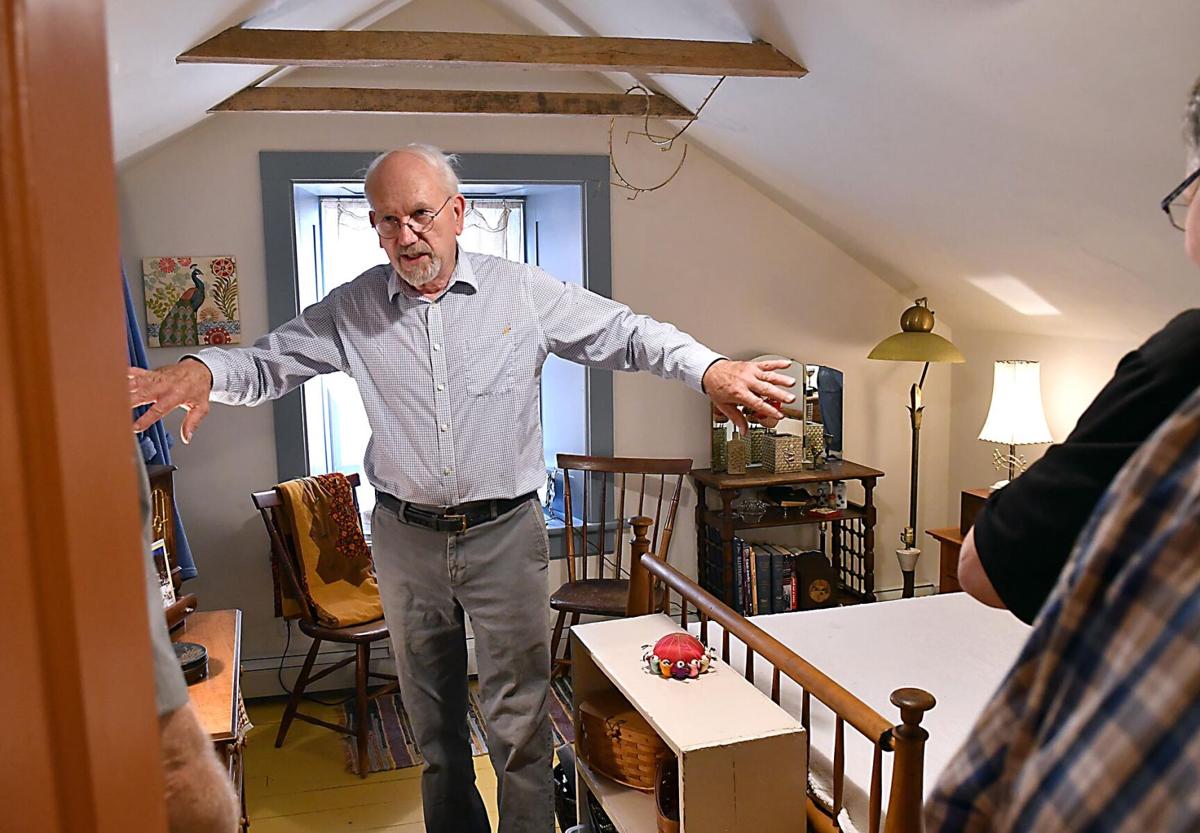 Tom Hagen explains the sleeping arrangements when one of the bedrooms in the historic home at 129 North Sixth Street once held eight boys from a large Irish Catholic family. 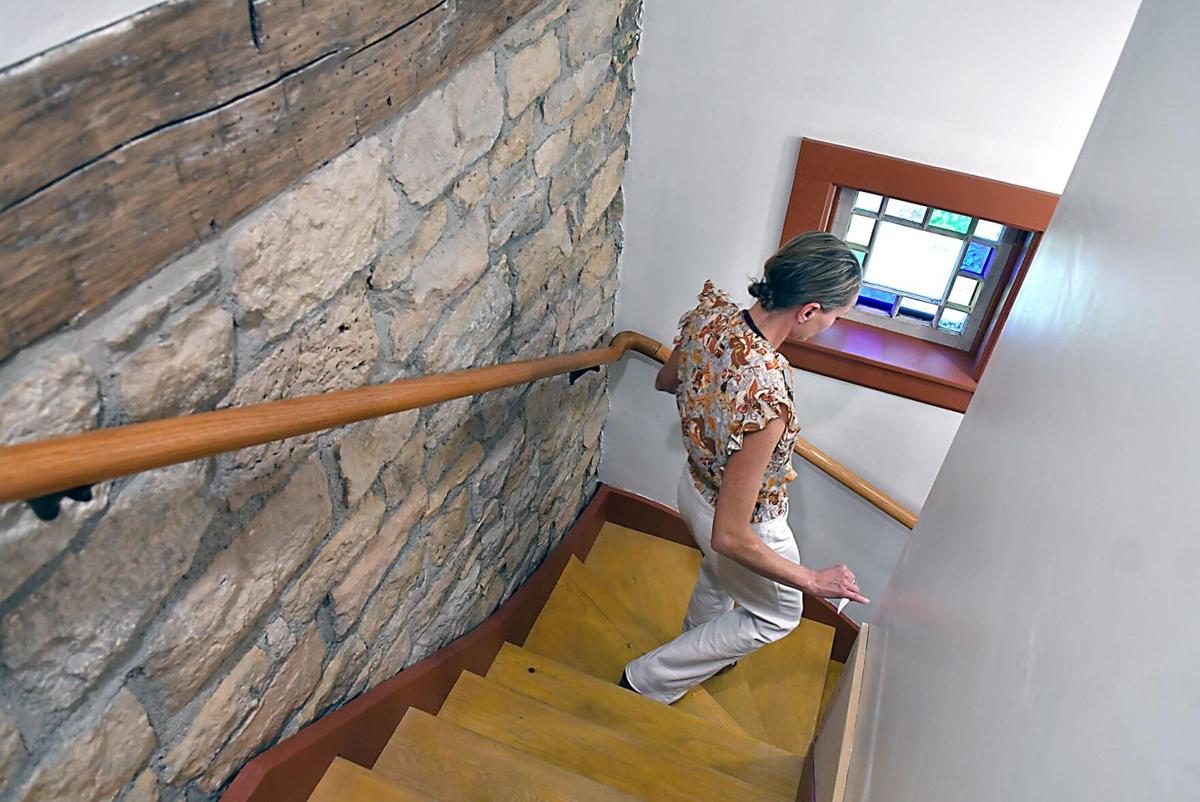 Molly Westman, a planning coordinator with the city of Mankato, was part of a tour of the 163-year-old home set to soon be added to the city’s list of historic landmarks.

Local historic preservationist Tom Hagen tells the Mankato Heritage Preservation Committee the story of the oldest home in the city that’s still at its original location on North Sixth Street.

Tom Hagen holds one of the ash boards that was placed at the base of the stone house, in lieu of a foundation, during its 1858 construction.

Tom Hagen explains the sleeping arrangements when one of the bedrooms in the historic home at 129 North Sixth Street once held eight boys from a large Irish Catholic family.

Molly Westman, a planning coordinator with the city of Mankato, was part of a tour of the 163-year-old home set to soon be added to the city’s list of historic landmarks.

Until the pandemic hit, everything was in place for a storybook ending for “The Little Stone House.”

One of Mankato’s smallest and least pretentious homes was set to stand beside the most grandiose structures in the community as the latest addition to the small but distinguished list of landmarks representing the community’s heritage.

The 1,000-square-foot house at 129 N. Sixth St. had survived more than 160 years of fierce weather, a fire that left it uninhabitable, no heat or maintenance during a decade of abandonment, the collapse of an entire wall as it was left to the elements, a city order that it be demolished as a public nuisance if it wasn’t repaired, legal setbacks at district court and appellate levels, a tax forfeiture sale that seemed destined to result in the building’s demise ... .

Through it all, The Little Stone House persisted.

In March of 2020, the building had the full attention of the Heritage Preservation Commission.

Painstakingly restored by an amateur preservationist and serving as a home once again, the house was one City Council meeting away from becoming Mankato’s 19th Heritage Preservation Landmark — joining the mansions built by prominent and wealthy early Mankatoans like Hubbard and Eberhart and Hunt, the massive government buildings like the Blue Earth County Courthouse, and the city’s most ornate citadels of religion and commerce such as the First Presbyterian Church and the First National Bank.

Then the global pandemic hit, the Heritage Preservation Commission didn’t meet again for 15 months, and the plans to honor the house were dropped in favor of more pressing matters.

With the pandemic waning, the commission is back at work, the City Council is restarting in-person meetings, and The Little Stone House is expected to be awarded its place of honor later this summer.

“When we went to the council, we wanted people to be there to celebrate,” said Molly Westman, a planning coordinator with the city.

Whether they attend the meeting or not, there will be plenty of people who deserve to celebrate and be celebrated, according to Tom Hagen, a former college instructor and historic preservationist.

“It’s not just the oldest house in Mankato, it’s an example of what should be done,” Hagen told the commission following a tour of the home.

But before Hagen talked about the lengthy fight to save the house and the unlikely hero in its restoration — a 24-year-old sandwich shop employee with virtually no money — he told the commission the story of its original construction and its decades-long deterioration.

The hillside lot was purchased for “$1 and promises” by Joseph Schaus, an immigrant from Luxemburg who was building the first SS. Peter and Paul Catholic Church. The “promises” were likely that Schaus would do some masonry for the seller of the lot, Hagen said.

A banking panic the year before had decimated the nation’s financial system, and bartering was common. It’s believed that part of the payment to Schaus by the local Catholics was in the form of materials from the church construction site a few hundred feet down the hill from 129 N. Sixth St. — that he was permitted to use leftover materials for his home.

“What we think he had to do was use a wheelbarrow at night,” Hagen said. “That he was paid in part in stone.”

Not enough stone for footings or a foundation. There were none at the base of Schaus’ new home. And his payment did not include mortar. The stones were placed on mud. But Schaus still managed to build a solid structure.

“Stop and think,” Hagen told the commission. “One hundred sixty years the house stood with mud between the stones and no foundation.”

In debt, Schaus lost the house in 1874, and it went through a series of sometimes colorful, sometimes tragic inhabitants. By the 21st century, it was in rough shape — so downtrodden that no one was interested enough in the land to deal with the mess on top of it.

“The entire history of the city unfolded in front of this house,” Hagen said. “And the only reason it survived is because it was neglected.”

A 2007 fire was very nearly the beginning of the end of the house’s long tenure overlooking the changing city below.

Left uninhabitable, its homeless owner lived in a tent during a lengthy but unsuccessful effort to finance repairs. Eventually abandoned, the house went into tax forfeiture and Minnesota weather took its toll.

By then, Caleb Wunderlich was working with Hagen as something of an apprentice stonemason while earning money at a sandwich shop. In 2014, Wunderlich decided to take on the restoration, persuading the city’s Economic Development Authority to grant him a $50,000 forgivable loan for materials — promising to spend 3 1/2 years restoring the home, stone by stone. The next year, Wunderlich purchased the property for $6,800 at a county auction.

Only one other potential bidder showed up at the auction — local landlord Branko Colakovic, who decided the Herculean restoration project was more than he wanted to tackle.

“You are the bravest person in town,” Colakovic told Wunderlich.

“Or the biggest fool,” Wunderlich responded.

With Hagen heavily involved in providing advice and scrounging materials for the project, Wunderlich toiled away day after day. Passersby were impressed enough to hand him $10, $100, even more. Retired North Mankato hardware store owner Dave Mutch was a regular helper at the site, cleaning stone while also compiling massive photo albums of the progress.

“The Little Stone House” now has three histories, according to Hagen. One is the story of its construction. Another is of the people who found shelter in it. The last was of how it was restored to life.

Rosemary Brekke, Wunderlich’s tenant, is now a part of both the second and third histories. While living in the house, she’s also the caretaker of the photo albums, the property’s landscaper and, increasingly, the keeper of some of its stories.

On Thursday, she received another one. During the restoration, Hagen contributed some boards he had obtained from pews that were part of the original stone Catholic church — specifically from the pews’ kneelers — for use in supporting the new plaster walls. They had served during so many Masses that the wood was visibly compressed in the places where the knees rested.

Brekke was clearly delighted by the image — that her walls were filled with prayers, stretching upward.

“I cringe at the idea of this house not being here,” Brekke said.

Commission member Tim Pulis felt similar relief that the home endures and that it soon will be given a place of honor just like the stately residences owned by Mankato’s affluent founders.

“I like the concept that you saved a blue-collar house,” Pulis said. “It’s not a mansion. This is ... life.”