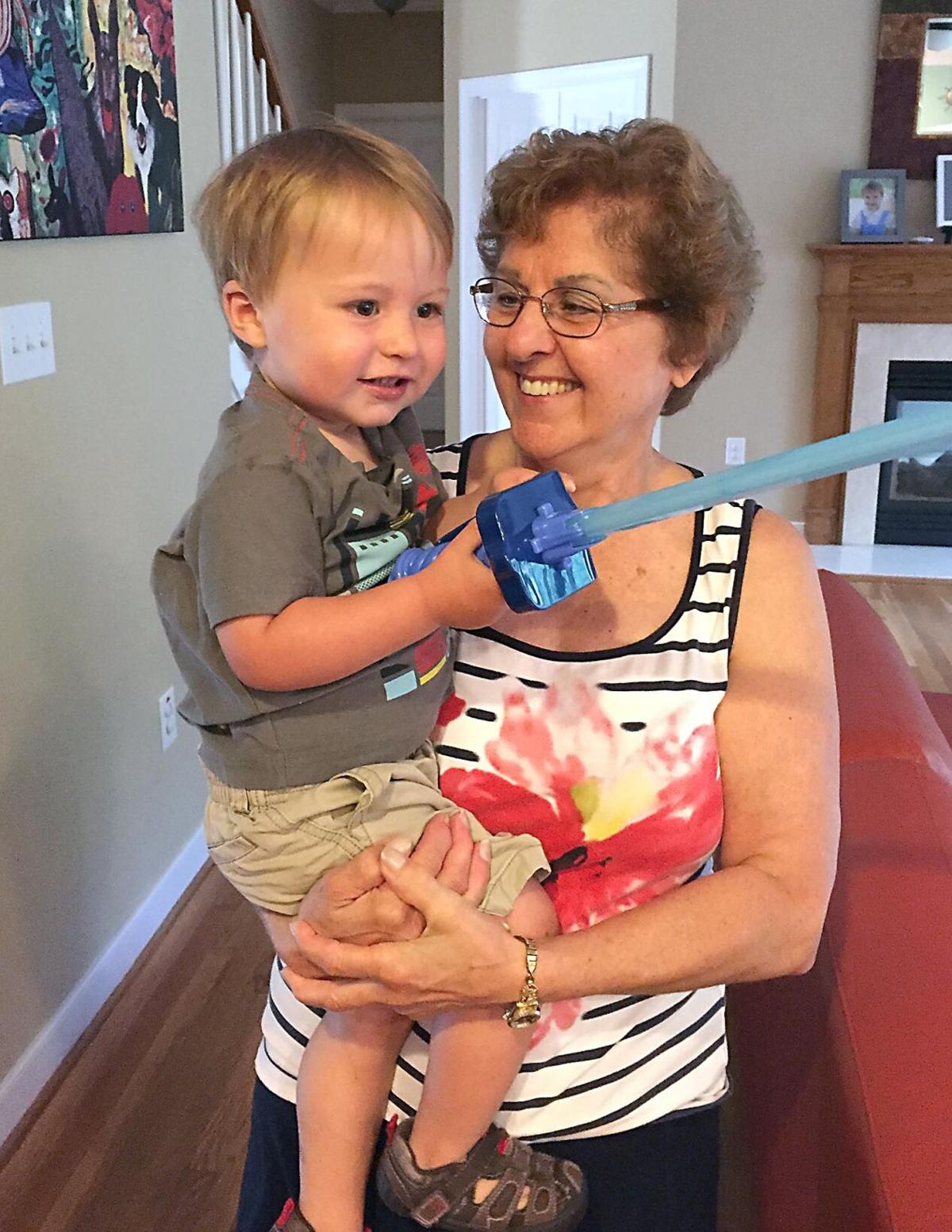 Dianne Honermann holds her grandson, Asher. She died of COVID-19 in August, and her family remembers her as a loving wife, mother of three, grandmother of seven and devout Christian. 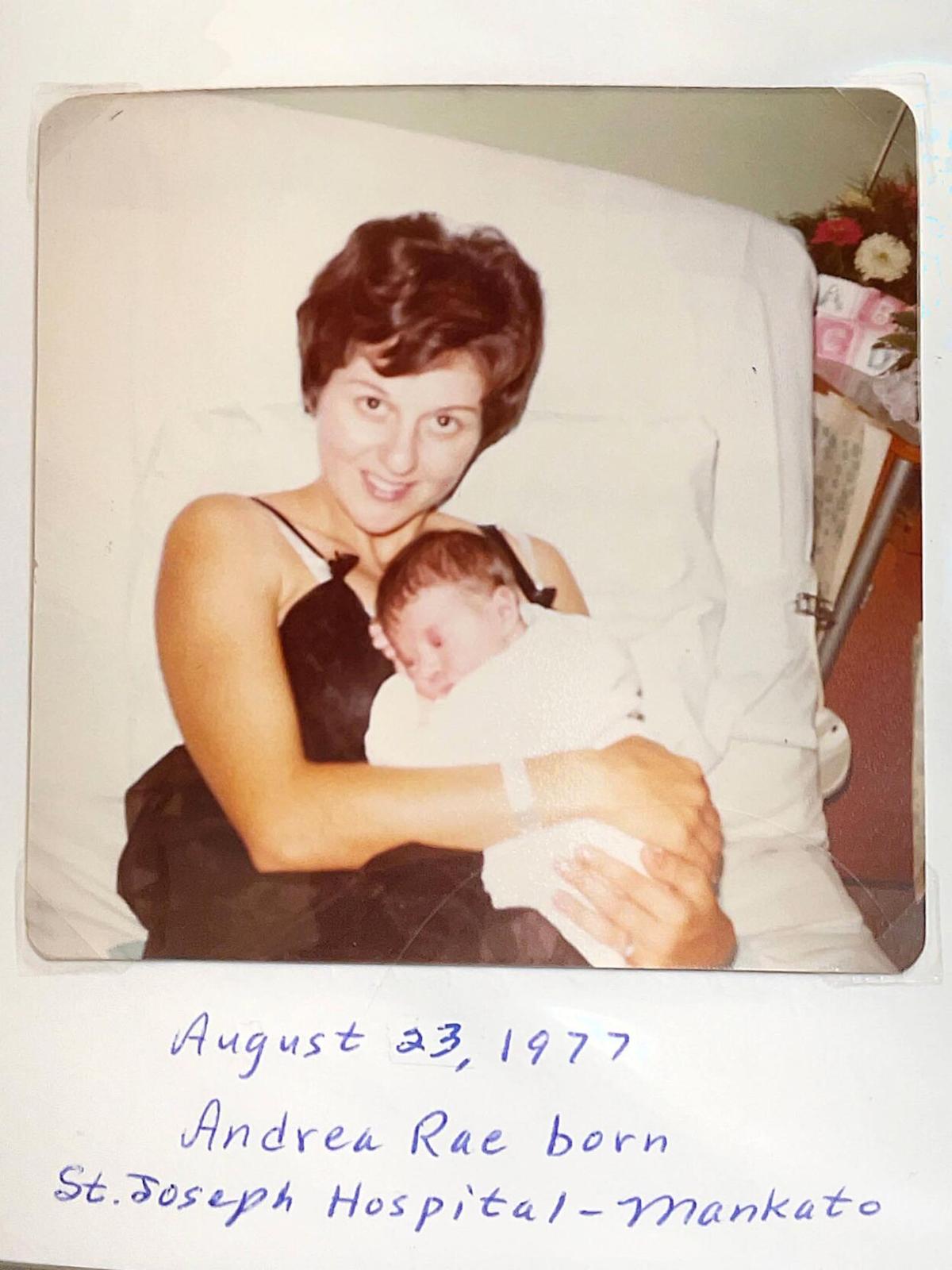 Dianne Honermann holds her newborn daughter, Andrea, at the hospital in Mankato in 1977. 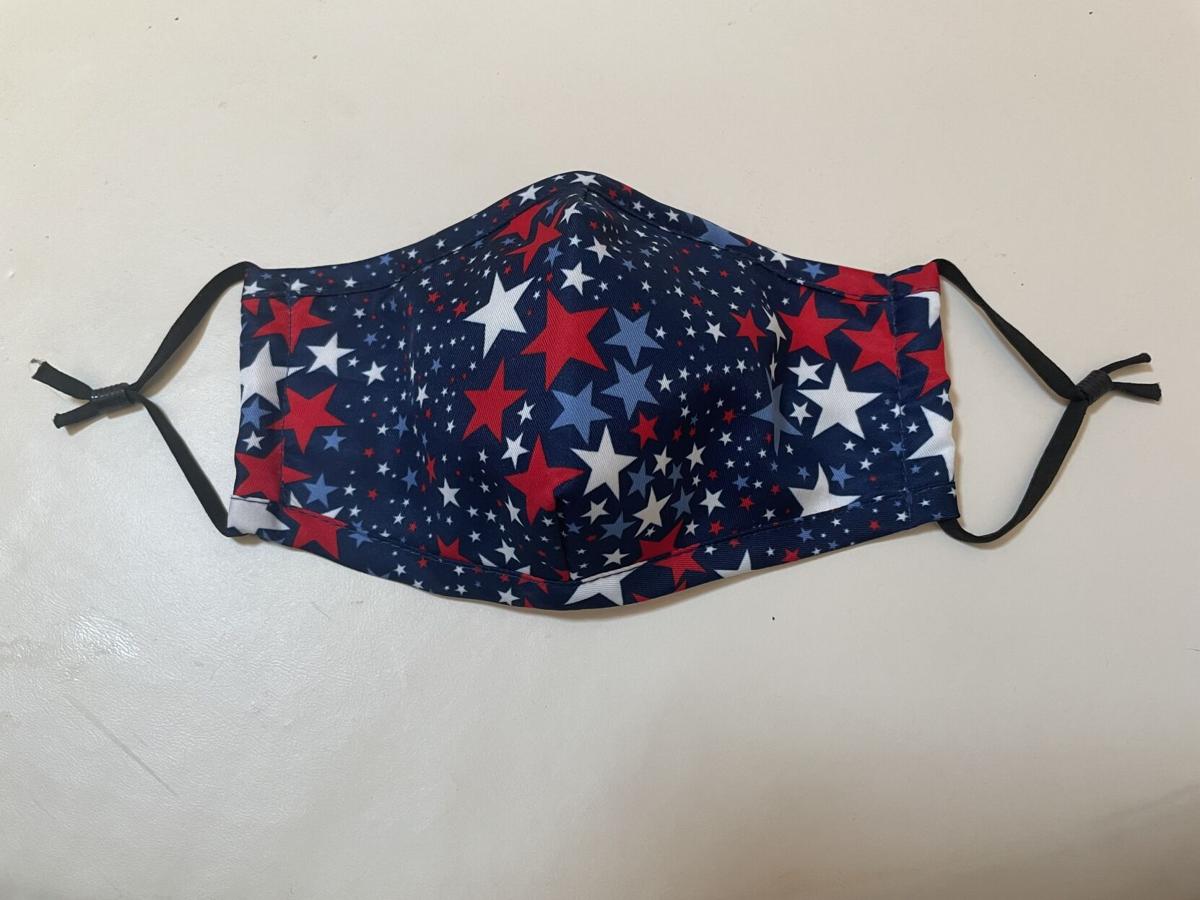 The mask Dianne Honermann wore when she went into the hospital with COVID-19 was emblazoned with red, white and blue starts. Wearing a mask as a way to protect others was a patriotic act for her, her family said.

Dianne Honermann and her husband, Alan, both tested positive for COVID-19 in July after being vaccinated earlier this year. His case was relatively mild, but she died from it in August after 17 days in the hospital. Still grieving her loss, the family’s understanding of the importance of vaccines isn’t shaken by the tragedy. They’re calling on others to get vaccinated as a way to protect others.

Courtesy of the Honermann family

MANKATO — While they process her loss, Dianne Honermann’s loved ones remember her as a caring wife, a wise and thoughtful mother, a cheerful grandmother and a devout Christian.

The Mankato woman’s husband, two sons, daughter and seven grandchildren are dealing with the pain of losing her to COVID-19 complications on Aug. 17 after a breakthrough infection months after being vaccinated.

Their tragedy hasn’t shaken their understanding of the importance of vaccinations, with her husband and children saying they hope hearing about her inspires more people to protect themselves and those around them.

“While the vaccine ultimately was not able to save her life, it is absolutely clear that the vaccines do and are working,” wrote her son Brian Honermann in response to questions sent to the family.

It hurts badly, he added, to know his mother fits into the “very small sliver of a sliver of a sliver” of vaccinated individuals who ended up dying of COVID-19. The reality of the vaccines is they’re still safe, effective and the “only viable option for our country and the world to get out of this pandemic,” he said.

“For all of us, getting vaccinated is not just an act of personal protection, but protection of our families,” he wrote. “We have children who cannot be vaccinated. (My sister Andrea’s husband) Erik Schroeder has ALS and — while vaccinated — is at great risk should he contract COVID-19 incidentally.

“These are not mere personal decisions,” he continued. “They impact on our ability as a country and as a world to move on from this pandemic.”

Dianne Lunders was born in 1944 and grew up on a farm near Cleghorn, Iowa, with her parents and nine siblings. She graduated as valedictorian from her high school and moved to Sioux City, Iowa, to work at the Toy National Bank.

On the dance floor at Shore Acres Ballroom, she met Alan Honermann, at the time a convertible-driving barber. The two were married July 27, 1968, before eventually settling in Skyline in the Mankato area for the last 47 years, where she supported Alan’s work as a longtime salesman for Schaeffer Manufacturing.

Since her death, her family has been running through countless memories of her over the years. Alan recalled the pride his wife took in dressing well after finding a good bargain, her coffee chats with neighbors, and the lengthy evening conversations over the phone with her siblings and friends — described as the “glue” of her large family.

“I would like people to remember my wife as a beautiful, smiling, bright, happy, caring, loving, devout and generous Christian, with lots of energy, physically fit, a good listener,” Alan described her. “(She) knew right from wrong, went out of her way to make as many friends as she possibly could, and kept in close contact with these relationships through phone calls, lunches or personal visits.”

At least 15 large photo albums maintained by Dianne document many of the memories, including trips and vacations the family took. She’d recently finished a photo album of her mother’s side of the family with plans to donate it, along with her mother’s wedding dress and veil, to a museum where they grew up.

The devout woman of faith was also halfway through an online “Bible in a Year” class when she died. She spent about one to two hours per day in the class until she went to the hospital.

The memories that most stand out to her daughter, Andrea, are about her “never-ending positivity and energy” along with her continual generosity. Andrea remembers from childhood into adulthood seeing her mother help older people in need of rides, groceries or simply a friendly visit.

“I am so grateful that I was raised within her devotion to God and church,” Andrea wrote. “I am so proud of the person she was and hope to emulate her examples throughout my life.”

When Dianne’s son Tom was about 10 years old, she was driving him home from an activity. He was enamored with heroism at the time, pondering people’s purposes in life and the roles they should serve in them.

The boy asked his mom if she’d die to save the world. He remembers her saying, “wouldn’t do me any good,” to which he meekly replied that he would.

As he thinks back on what she said, he suspects he or someone else must’ve done something bad that day to warrant her response. Because she lived her life the opposite of how she responded, Tom wrote.

“She sacrificed for others whenever the opportunity arose,” he said. “She gave freely and willingly.”

By learning about how she approached life, maybe her example can lead to saved lives after all, he added.

“If the people that read this article are moved to reconsider how they have approached the pandemic with regard to vaccines and masks, and helping and trusting others, perhaps her death will have the heroic effect of saving some lives too,” Tom wrote.

For him, the memories he won’t be able to make with her are on his mind the most these days. They include more memories she won’t have the opportunity to make with seven grandchildren.

There won’t be new pictures of her with the flowers Tom sent to her for her birthday and Mother’s Day. She’ll be absent from the trip to the Military Aviation Museum in Virginia Beach, which had to be rescheduled when COVID-19 hit. And he won’t get to see how much hilarity would’ve ensued if his sons got to give their grandmother her first virtual reality experience with imaginary lightsabers.

At 77 years old, Dianne didn’t have any known health issues or underlying conditions before her death. She received her second dose of the Pfizer vaccine in March and first began feeling COVID-19 symptoms on July 27, three days after attending a party.

The family said they found out about half of the 60 or so people at the party later tested positive for COVID-19. Unvaccinated and unmasked people were present, and a written response from Tom endorsed by the family stated: “It’s obvious now that attending that particular party was not a safe thing to do.”

At the time, though, case counts were low. It seemed safe, like everything was getting back to normal.

In hindsight, late July was when cases started ramping up in Blue Earth County and across south-central Minnesota. Case data from the Minnesota Department of Health showed Blue Earth County had about seven new weekly cases in late June and early July, then 28 new cases between July 24-30, then 144 weekly confirmed cases a month later. During the week ending Friday, new case counts rose to 229 in the county.

“Now we can see that the small uptick in that average towards the end of July was the beginning of the delta wave hitting their county,” Tom stated.

Dianne was admitted to Mayo Clinic Health System in Mankato’s hospital on Aug. 1. Her breathing was labored by then to go with coughing, lethargy and some confusion.

Her test came back positive for COVID-19, followed by Alan testing positive the next day. He was discharged after a short hospital stay. She remained.

Her family, especially Andrea’s husband, Erik, kept friends updated about her plight on a Caring Bridge page. The same page later ended up receiving an outpouring of supportive messages and condolences from friends.

Dianne spent 17 days total in the hospital, seven of them in the intensive care unit on a ventilator. Alan and Tom were with her in the room holding her hand while she was extubated, while Andrea and Brian were with her on the phone, to say their goodbyes as her heart stopped.

From the room, they retrieved the mask she was wearing when she was admitted to the hospital. It’s emblazoned with red, white and blue stars.

“She knew that what actually used to make America great was people taking care of each other,” Tom wrote. “She practiced that in her daily life. Wearing a mask to protect others is a patriotic act.”

One of the many cruelties of COVID-19 is how different and random the outcomes are. Some can experience it without even knowing it, while others don’t survive it.

More than 670,000 Americans and counting are in the latter category. It leaves families wondering why their loved ones were the unlucky ones.

For the Honermann family, Dianne had a severe case ending in tragedy, while Alan had relatively mild symptoms and survived. It’s unclear why the outcomes were so different.

But her family, like so many others across the country and world, is forever changed because of it. If everyone had gotten vaccinated, Tom wrote, the delta wave leading to Dianne’s death couldn’t have happened.

Vaccines aren’t just about lowering an individual’s chances of dying or being hospitalized from COVID-19, although they’re shown to be effective on both counts despite rare breakthrough examples. The point of mass vaccinations is also to prevent more contagious and deadly variants such as delta from getting a foothold in society, increasing the likelihood of breakthrough cases, hospitalizations and deaths.

Mayo Clinic Health System began a new series of articles Friday with health care professionals debunking myths about the COVID-19 vaccine. The first question they took on is why people should get vaccinated if they could still get sick from the delta variant.

“There isn’t a vaccine that is 100% effective at preventing illness,” he stated. “Breakthrough cases of COVID-19 are going to happen, but the percentage is small. Also, the disease in vaccinated people tends to be much less severe than the diseases in unvaccinated people.”

State health department data through mid-August showed about 108 of the 3,080,074 Minnesotans who were fully vaccinated later died of COVID-19. The percentage equals out to a 0.004% death rate among vaccinated Minnesotans.

In a Facebook post after his mother’s death, Tom expressed frustration at seeing people still scoff about the seriousness of COVID-19. Pointing out how most people who get COVID-19 survive it is one of the most common tactics used by people to downplay the pandemic.

“As if a 98% survival rate erases the pain the other 2% and their families experience,” Tom wrote.

The pandemic is still life and death for many families, he went on, calling for people to set aside the politics and protect themselves and their fellow Americans by getting vaccinated.

“There is no good reason for America to continue losing mothers, fathers, brothers, sisters, children, friends, or neighbors to COVID-19,” he said.