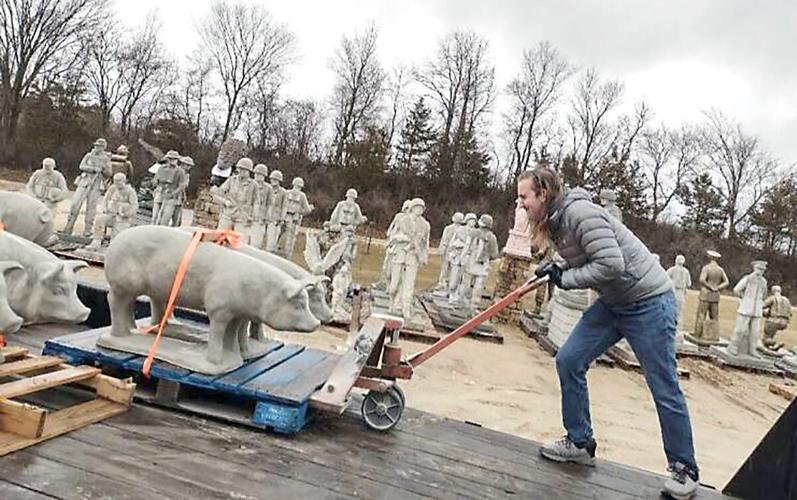 Alex Young-Williams pushes pig statues onto a trailer for transport to Fairmont for the Going Hog Wild in Martin County project. 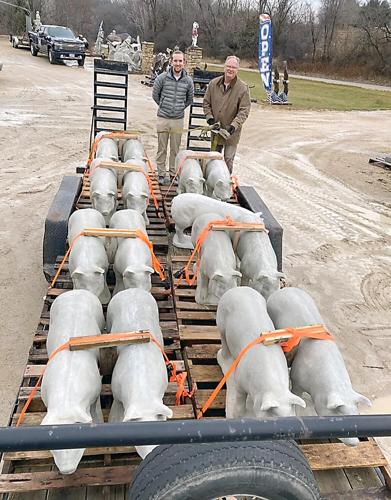 Alex Young-Williams (left) and Jeff Rouse haul pallets of concrete pigs from the manufacturer in Kellogg back to Fairmont. Sixteen local artists have worked with the 36 hogs’ sponsors to create a unique design on each statue. The program will multiply over the next couple of years, eventually reaching 100 hogs.

The 36 concrete hogs were manufactured by SVJ Creative Designs in Kellogg.

Alex Young-Williams pushes pig statues onto a trailer for transport to Fairmont for the Going Hog Wild in Martin County project.

Alex Young-Williams (left) and Jeff Rouse haul pallets of concrete pigs from the manufacturer in Kellogg back to Fairmont. Sixteen local artists have worked with the 36 hogs’ sponsors to create a unique design on each statue. The program will multiply over the next couple of years, eventually reaching 100 hogs.

The 36 concrete hogs were manufactured by SVJ Creative Designs in Kellogg.

In working to bring attention and guests to their part of the world, a group in Fairmont turned to something they’re known for: pork production. Once they got the ball rolling, everybody, it seems, is going Going Hog Wild in Martin County.

“We as a group of individuals, some on different committees here in town, wanted to do something to better present local artists and have a physical attraction for our community,” said Jeff Rouse, a Fairmont businessman on the committee.

Initially, they were going to keep these concrete hogs penned in Fairmont this year. When interest swept beyond city limits like hogs through an open pen door, however, they made it a countywide event in its inaugural year.

Sixteen local artists have worked with the 36 hogs’ sponsors to create a unique design on each hog, Rouse said. The piggies will multiply over the next couple of years, eventually reaching 100.

Alex Young-Williams came to Fairmont in 2020 as a “community activator” through a two-year AmeriCorps fellowship with Lead for Minnesota. He is hosted locally by Project 1590. He became a perfect partner with Rouse.

“I’ve been trying to spread my wings and work on a number of different community projects,” Young-Williams said. “And I found myself just kind of drawn to art projects in particular.”

Through Project 1590 and the Martin County Arts Council, he applied for and received an $8,000 Arts and Cultural Heritage Grant from Prairie Lakes Regional Arts Council, and Going Hog Wild got its start. Artists 18 years of age and older were solicited from the nine-county Prairie Lakes region. Those selected were given a $300 stipend and connected with their sponsors for potential design collaboration.

The concrete hogs were created by SVJ Creative Design, a manufacturer in Kellogg, Minnesota, and painted hogs will be unveiled during an event Thursday in downtown Fairmont.

Blake Potthoff, executive director at the Fairmont Opera House, will be master of ceremonies for the event on West First Street. He will call each of the hog sculptures, their sponsors and artists to introduce them to the county.

The Martin County Pork Producers will serve their Pork Chops on a Stick. Kids Just Want to Have Fun, a Project 1590 team, will have lemonade, water and chips. Minuteman Press of Fairmont will have masks of piglets for kids and music will be provided by Fairmont High School students/trumpeters Ben Moeller and Hudson Laven.

“(My husband) Dave and I thought it was a fun idea and didn’t know that Martin County was (among) the largest pork producers in the United States,” said Shelly Speedling, president of SVJ Creative Designs. They have more than 3,000 concrete molds they work from, including dozens of animals and military statues. They have two pig designs.

Rouse said SVJ was first approached about making a couple of dozen hogs for the first litter. They got other calls as interest grew, settling eventually on being able to produce 36 this year. The process for creating each pig is more complicated than a good barbecue recipe:

Molds are a rubber form with a hard fiberglass backing, which are put together using bolts, nuts and washers, Speedling said. The mixture of cement, water, rock and other materials is poured into the mold upside down while vibrating to help it settle the mixture where it needs to go. It is turned over the next day using a hoist connected to an overhead beam.

Metal rebar is inserted into each leg to provide strength to the wood, PVC or metal appendages. Hogs are placed onto pallets and molds and the rubber matting removed.

“The next few weeks the hog will cure — no pun intended,” Speedling said. “That means we allow the moisture in the pig to come out and the surface color will be looking more whitish gray.”

During the curing process, workers hand-smooth the natural imperfections, such as pit holes, and rough, exposed seam lines. After the weekslong curing process, the hogs are ready to paint, she said. Local businessman Jim Tate provided warehouse space for painting.

Rouse and Young-Williams made a few trips to Kellogg with a trailer to load up and transport the hogs to Fairmont as they were finished.

Through his work with other small towns, Rouse was familiar with the idea of using a local item, such as hogs, as a draw. He noted that Lemars, Iowa, has ice cream cones in homage to being the home of Blue Bunny ice cream, and a town in South Dakota has buffalo.

“Talking to the towns, they were saying that people really enjoyed them and took a lot of pictures with them. And we thought we could do something like that,” Rouse said. The 2-foot-tall hogs are placed on a 2-foot base, which is a good height for photos.

He hopes to make Going Hog Wild in Martin County a permanent committee that will come up with ideas to utilize the hogs throughout the year with games and events. He’s hoping Young-Williams stays after his official time comes to an end in July.

“I think when people see these, they’re going to be amazed at how detailed and artistic they are and will really enjoy them throughout the community,” Rouse said.

Information about hogs and their locations is available at www.goinghogwildinmartincounty.com or www.facebook.com/goinghogwild