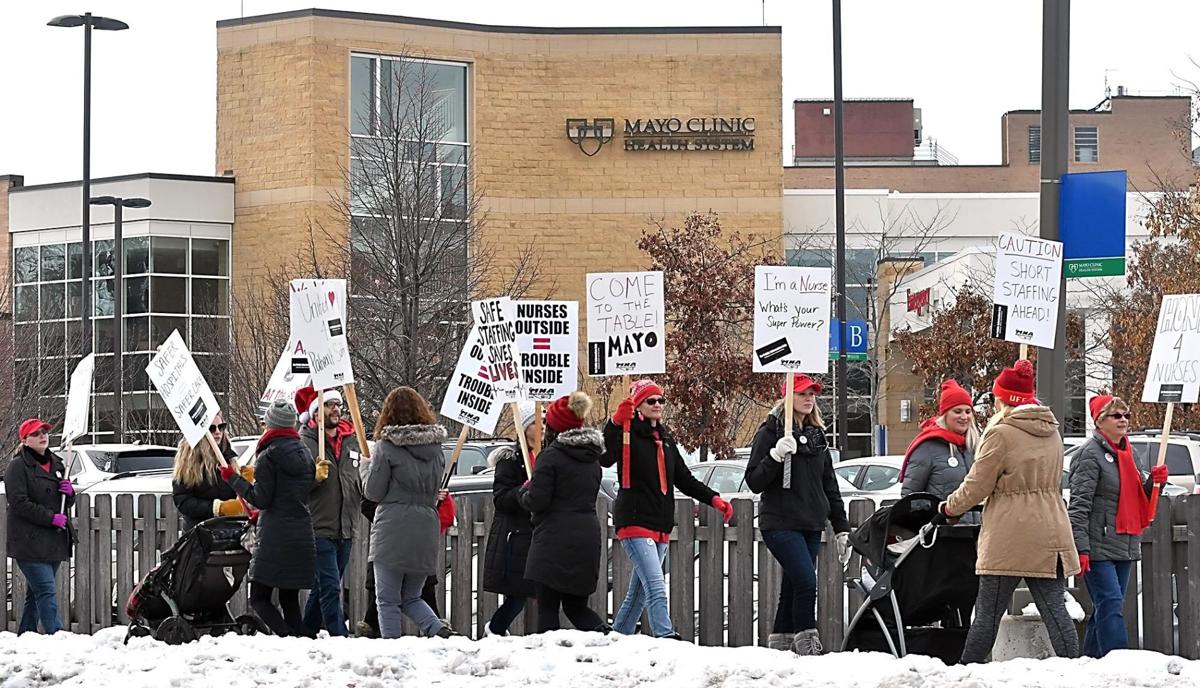 Nurses picket outside Mayo Clinic Health System in Mankato’s hospital Thursday. The Minnesota Nurses Association’s local union, representing about 560 Mankato nurses, and the hospital’s management have reached a standstill in negotiations over a new contract. 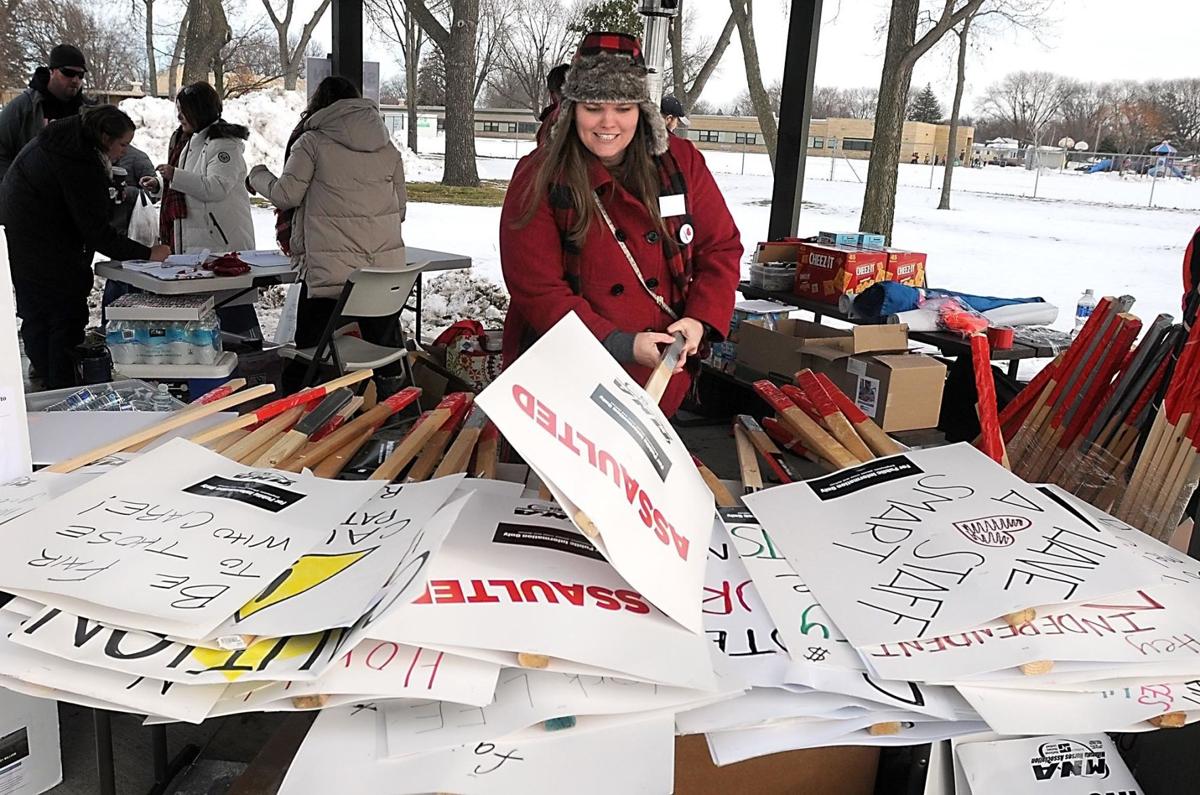 Mayo Clinic Health System in Mankato nurse Tiffany Hoffmann organizes signs ahead of a picket outside the hospital Thursday. She was one of about 200 nurses picketing for a new contract.

Nurses picket outside Mayo Clinic Health System in Mankato’s hospital Thursday. The Minnesota Nurses Association’s local union, representing about 560 Mankato nurses, and the hospital’s management have reached a standstill in negotiations over a new contract.

Mayo Clinic Health System in Mankato nurse Tiffany Hoffmann organizes signs ahead of a picket outside the hospital Thursday. She was one of about 200 nurses picketing for a new contract.

After contract negotiations with management hit an impasse, unionized nurses from Mayo Clinic Health System in Mankato picketed outside the hospital Thursday.

The last three-year contract between the local Minnesota Nurses Association union — representing about 560 nurses at the Mankato facility — and hospital management expired in September. Little progress has been made during the five bargaining sessions since.

The negotiating process has been a key sticking point so far, with the union calling for open bargaining so its members can listen in on the discussions. Hospital management contends only the union’s elected negotiating team should be in the room.

Kris Stenzel, a registered nurse at the hospital and member of the union’s negotiating team, said the nursing staff should get to hear for themselves what’s going on during the bargaining process just as other unions have.

“The nurses in the room are there to take notes and hear things firsthand,” she said. “We’re not making a circus out of this.”

Both sides have accused the other of refusing to bargain.

Laura Evenson, chief nursing officer for Mayo Clinic Health System’s southwest Minnesota region, said the union’s demand for open bargaining is what’s preventing productive negotiations. She said the union, also known as MNA, brought in large groups of nurses to all but one of the sessions.

“MNA came and shared with us and said they were authorizing all 500 nurses to be part of the negotiating team,” she said. “We believe that to be impractical and unproductive.”

The sides did exchange proposals at their first session. Evenson said the union hasn’t responded to any of Mayo in Mankato’s proposals since then, including one attempting to address workplace violence concerns raised by nursing staff.

Stenzel, who joined elected officials and fellow union members in rallying the gathered picketers Thursday at Emerson Park, called hospital management’s initial proposal a worse contract across the board than the previous one. Accepting it, she said, would undo all the progress previous union members made.

“Everything they proposed to us is an absolute takeaway from our contract,” she said.

About 200 picketers registered for Thursday’s demonstration along Dickinson Street near the hospital’s emergency room entrance. The picket wasn’t a work stoppage, as union members participated during off hours.

Both MNA and Mayo Clinic Health System filed Unfair Labor Practices, or ULPs, against each other regarding the negotiation process. The National Labor Relations Board will make a determination on the ULPs, although it could be weeks before a decision comes down.

The board might not weigh in until after the upcoming holidays, Stenzel said, so reaching a resolution before then would be preferable. She said the two major issues the union is pushing for are about making sure the workplace is safer for nurses and ensuring adequate staffing. The hospital received about 150 reports of violence against staff in 2018, according to MNA spokesperson Rick Fuentes.

Amid the contentious bargaining process, Evenson offered praise for the hospital’s nursing staff. She said she’s hopeful the sides will be able to agree on a new contract.

“They’ve truly wanted to do the best for our patients and they give outstanding care,” she said. “We do really want to come back and settle.”