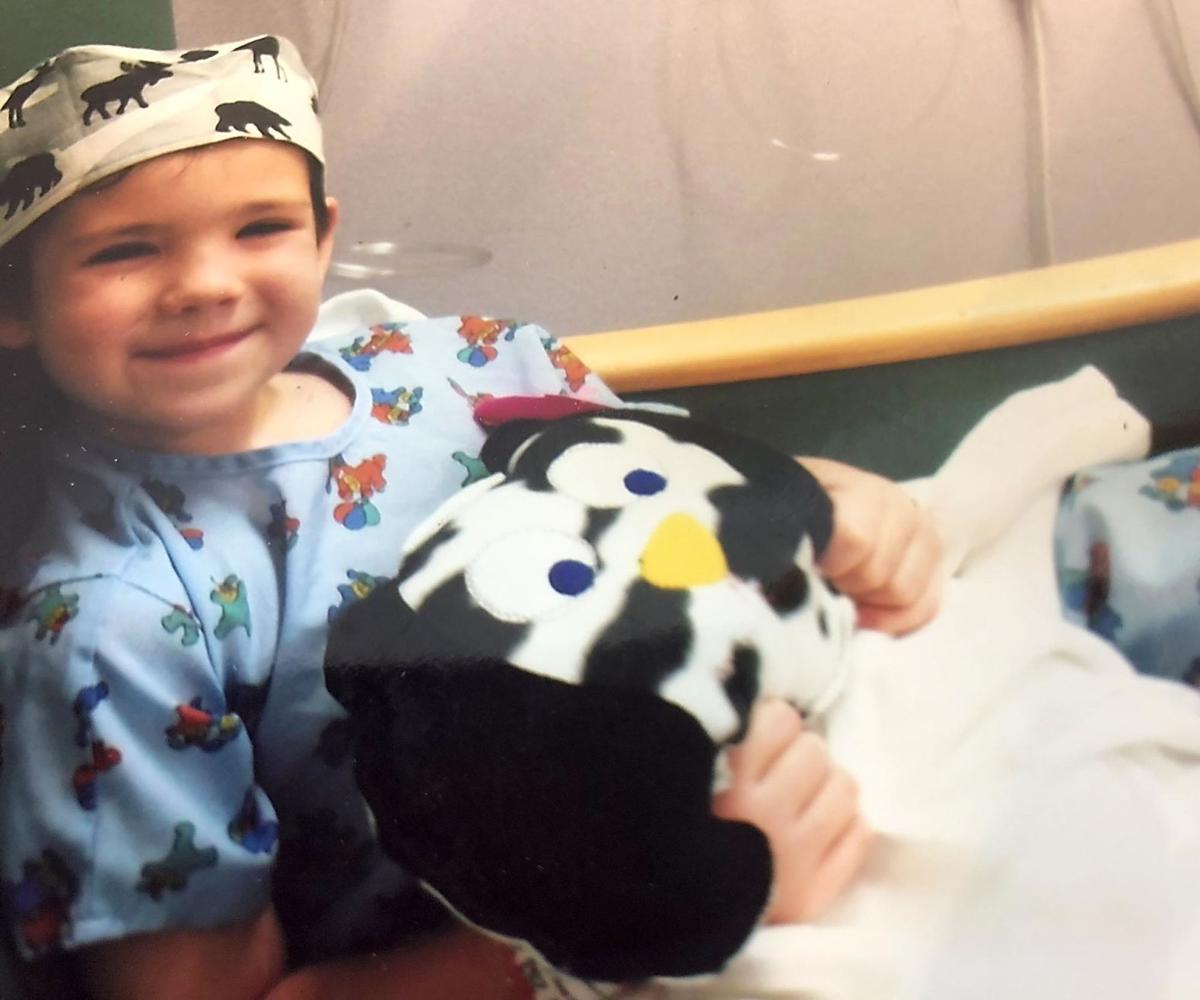 Joe Frundt smiles while in a hospital bed in Rochester about eight years ago. Both Frundt and his aunt, Michelle Heichel, were born with Hirschsprung disease, a condition where intestinal nerves don’t develop before birth. The birth defect required surgery in both, but the procedures were vastly different as technology advanced through the years. 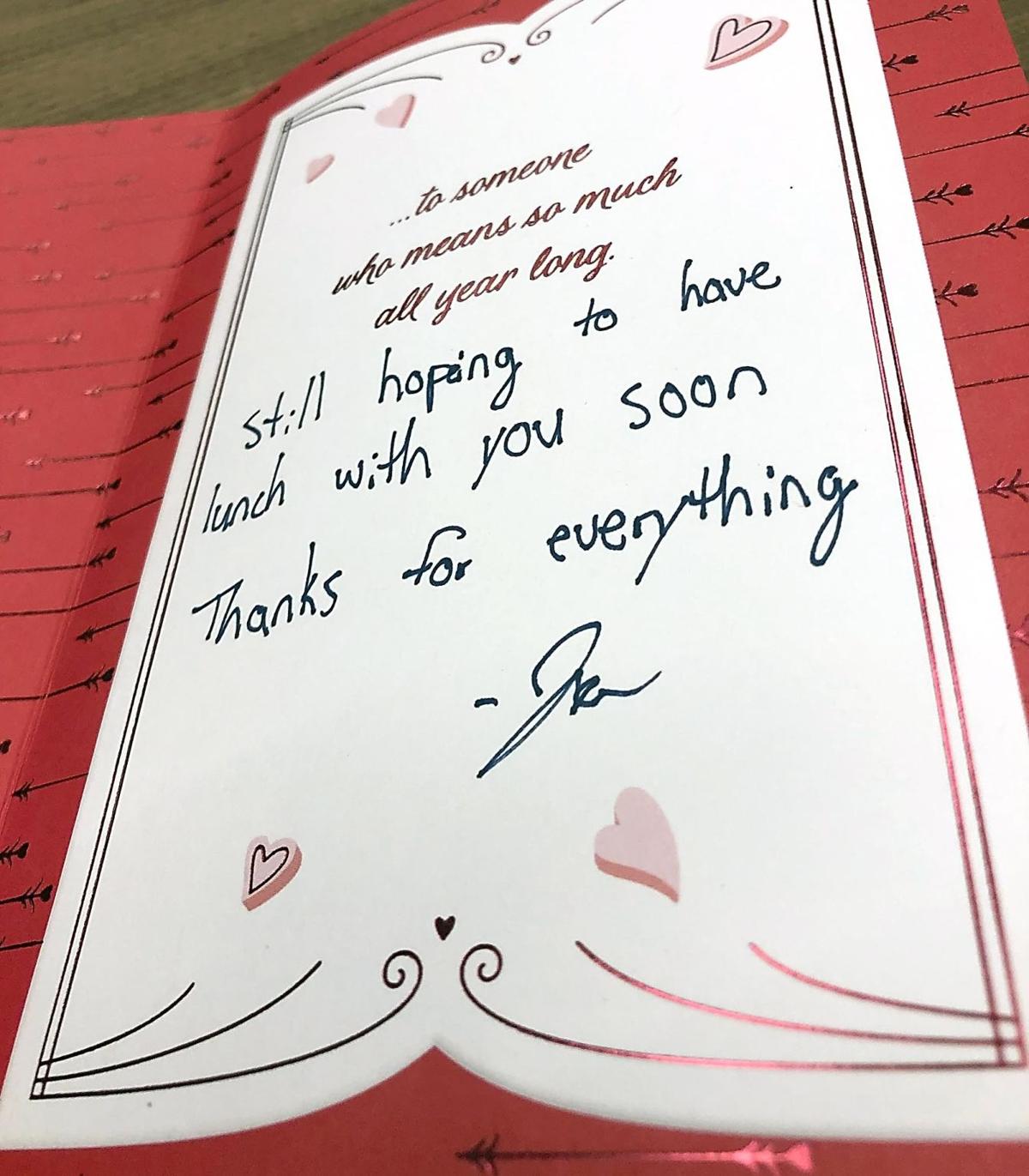 Joe Frund and Dr. Christopher Moir have remained in touch since Moir performed surgery on Frundt when the latter was a baby. 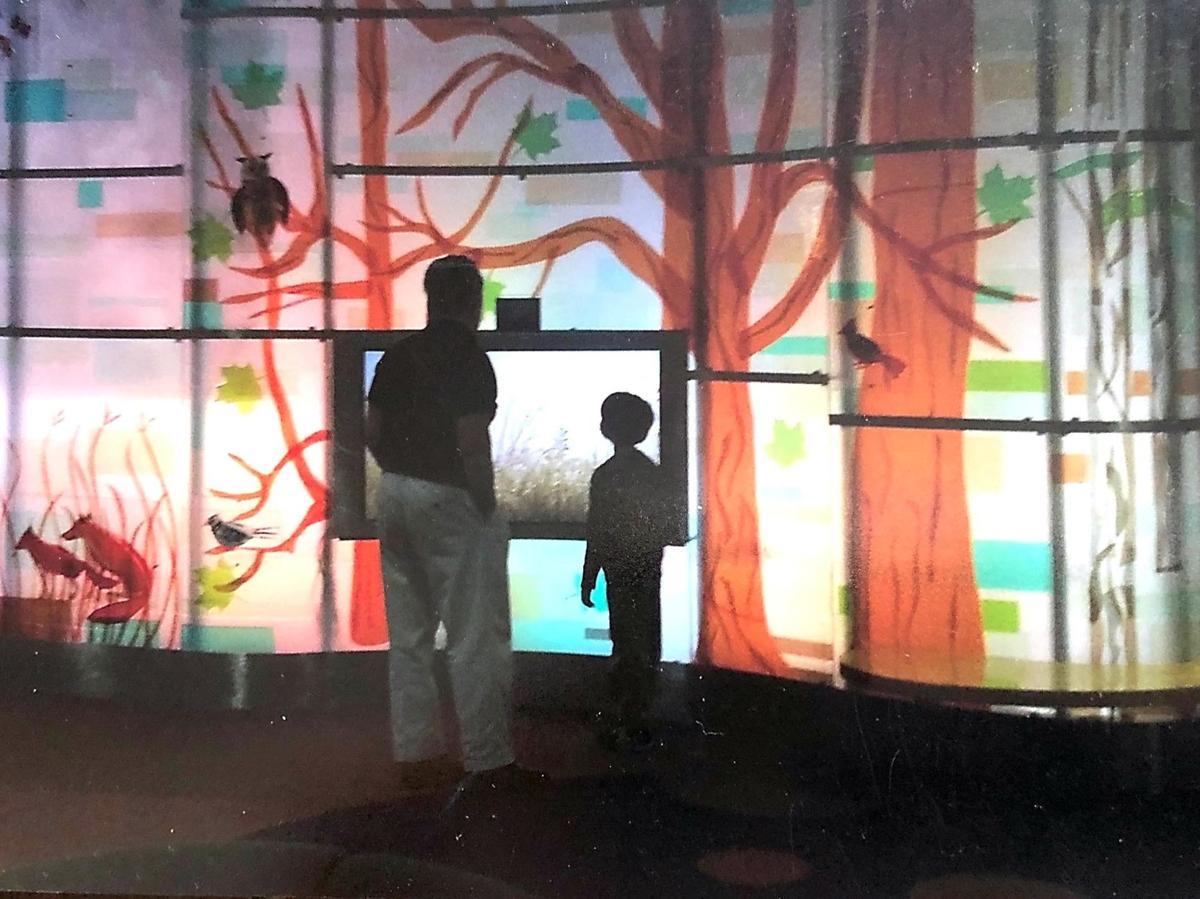 Michael Dowd (left) stands with his grandson, Joe Frundt, at Mayo Clinic in Rochester about eight years ago. Dowd’s daughter and Frundt were born with Hirschsprung disease, giving Dowd a firsthand look at how much treatment has changed in recent decades.

Joe Frundt, 14, of Blue Earth, writes a thank-you card to Dr. Christopher Moir as part of an annual Valentine’s Day tradition. Moir operated on Frundt, who was born with Hirschsprung disease, when the latter was an infant. Joe has written to him every year since.

Photo by Brian Arola
1 of 3

Joe Frundt smiles while in a hospital bed in Rochester about eight years ago. Both Frundt and his aunt, Michelle Heichel, were born with Hirschsprung disease, a condition where intestinal nerves don’t develop before birth. The birth defect required surgery in both, but the procedures were vastly different as technology advanced through the years.

Joe Frund and Dr. Christopher Moir have remained in touch since Moir performed surgery on Frundt when the latter was a baby.

Michael Dowd (left) stands with his grandson, Joe Frundt, at Mayo Clinic in Rochester about eight years ago. Dowd’s daughter and Frundt were born with Hirschsprung disease, giving Dowd a firsthand look at how much treatment has changed in recent decades.

An aunt and nephew in the Mankato area share a rare disease, giving their family a firsthand look at how far treatment advanced in between their births.

Michelle Heichel and Joe Frundt were both born with Hirschsprung disease, a birth defect found in 1 in 5,000 newborns where a baby’s intestinal nerves don’t develop before birth. The condition is essentially a death sentence if it isn’t addressed.

Michelle’s experience with the disease as a newborn in the late 1960s helped the family understand what to expect when they found out Joe had it in the 2000s.

“We were worried, of course, but not to the point we thought what the heck is going to happen because we’d been down that road before,” said Michael Dowd, Michelle’s father and Joe’s grandfather.

Although their surgeries greatly differed, they’re both now living regular lives. Michelle and her twin sister, Angie Frundt, who is Joe’s mom, work at Mayo Clinic Health System in Mankato. Joe, 14, is an eighth grader in Blue Earth who plays basketball and is considering a career in medicine.

The family is grateful for the care they received at Mayo Clinic decades apart. Joe even signs a card thanking his doctor every year as part of a Valentine’s Day tradition.

“We initially just did it kind of as a thank-you, but as the years went by, we kept doing it and Joe would begin to ask if we were doing a card for Dr. (Christopher) Moir,” Angie said. “So it just kept going.”

Joe was only 5 months old when Moir performed life-saving surgery on him. In the years since, he’s spent more time with the doctor at follow-ups, saying he remembers Moir’s mustache and how his nice disposition gave him confidence.

Moir performed a procedure known as a rectal pull through, a more minimally invasive procedure to remove diseased portions of the intestines than was available in the past. Technological and medical improvements help surgeons speed up the process to correct the issue.

“Our technology has gotten vastly improved,” Moir said. “With laparoscopy, we’re able to see things on huge TV screens now in a baby, so it’s much larger than life.”

Michelle’s large scar across her abdomen, in comparison, shows how different treatment was in 1969. It took longer back then to identify the disease, let alone to perform the surgery.

Moir said most children at the time needed colostomies until they were grew healthy and large enough for an operation. Michele needed an open surgery but avoided a colostomy through a treatment plan documented by her mom in her baby book.

Michelle couldn’t receive her surgery until she was 9 months old. The family had to give her enemas and special formula to get her through the previous five months.

Her mother described a nearly five-hour surgery where about a foot of “bad colon” was removed. The final remembrance on the page ends on a good note, though, saying she came home later that month and “eats like a small horse.”

Michelle and Angie are twins, so the latter was tested for the disease as well. Only Michelle had it, a surprise to doctors at the time, although a cousin who died from it and Joe having it show the sometimes genetic nature of the disease.

“Of course, you think the worst at first,” Angie said of when they found out Joe had it. “But having my dad’s input and seeing how well Michelle did, also having a strong faith, held us together.”

Surgery is only one step in treating Hirschsprung disease. Families have to be diligent about stomach care afterward, following a feeding plan and knowing the signs in case the child’s repaired intestines become obstructed.

Dowd said throughout his daughter and grandson’s ordeals the care teams were communicating with the family. Being heard was reassuring, he recalled, like they were all part of a team trying to do what’s best for the children.

After experiencing the scary wait to figure out what was wrong with Michelle, he said he’s thankful doctors were able to identify it earlier in Joe.

He helped care for Angie’s two older sons while Joe was in Rochester, although he accompanied Joe on some visits. A photo from about eight years ago captured the two of them at the hospital spending time together as grandpa and grandson.

Around that time Joe had his biggest health scare since surgery as an infant. As a kindergartner he almost had a rupture, requiring a swift medical response.

Joe remembers bits and pieces of it. His mom said the family jokes about how they didn’t think Joe’s doctors have ever seen him cry, even through all his procedures and appointments.

“He was never nervous going over there,” Angie said. “Even as a baby he had a special bond with Dr. Moir.”

Along with his annual card to Moir, Joe and his family donate to a medical mission the doctor works on in Africa. Moir is a visiting faculty member providing surgical instruction in Cameroon and Kenya.

Moir sent Joe a letter in January thanking him for his letters and donation. He said it’s encouraging to see how well Joe is doing.

“We see the babies at their worst and then the children grow up,” Moir said. “If they’re so thoughtful like this, it’s so encouraging to us and their team to know they’re thriving.”

The doctor remaining in touch with Joe shows how much he cares about his patients, Michelle said.

“It shows the compassion that he has for his patients and the intentionality he has,” she said.

Angie and Michelle credit their experience at Mayo as children with inspiring them to work within the organization as adults. They were both pediatric nurses and now work in the psychiatry unit at Mayo in Mankato.

“How do you thank them enough for saving your child?” Angie said. “How do I thank Dr. Moir enough? I can’t.”

They try, though, with gestures such as the annual Valentine’s Day card tradition. Joe said it’s a cool feeling to keep in touch with a doctor who impacted his life so much.

“He’s treated a lot of people and he still talks to me,” he said.