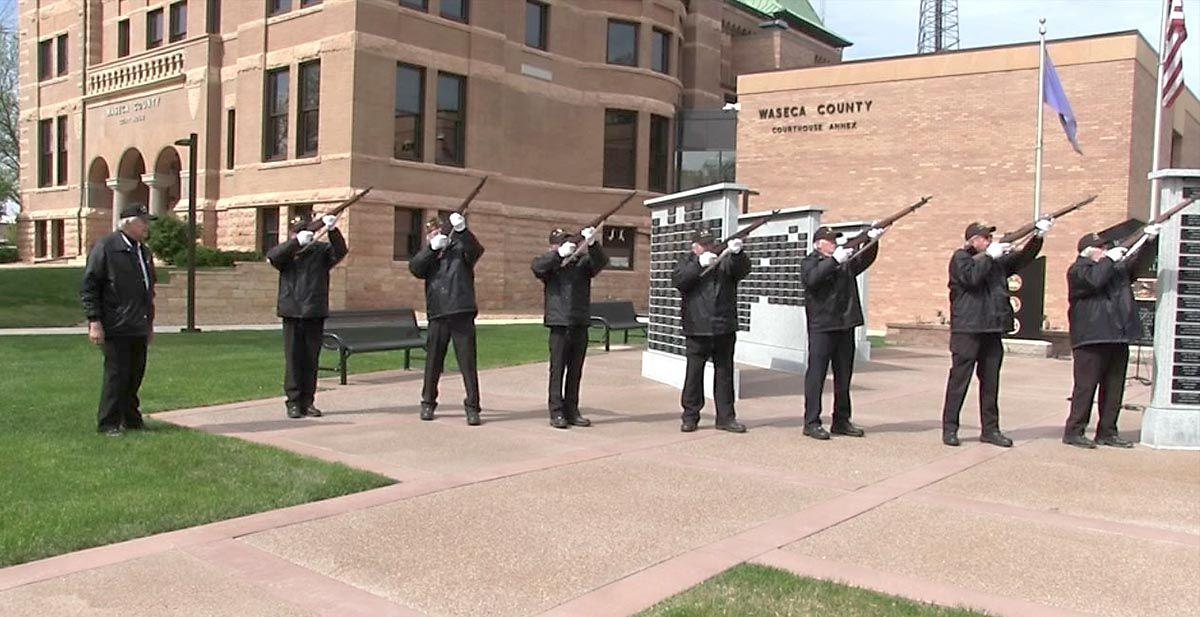 Members of the Waseca-area Veterans of Foreign Wars rifle squad participate Saturday in a pre-taped Memorial Day ceremony to remember their deceased military comrades. The ceremony will be carried Monday on Waseca’s public access channel and on the city website. Groups throughout the region have opted to either cancel or make adaptations to their 2020 observances in response to the coronavirus pandemic. 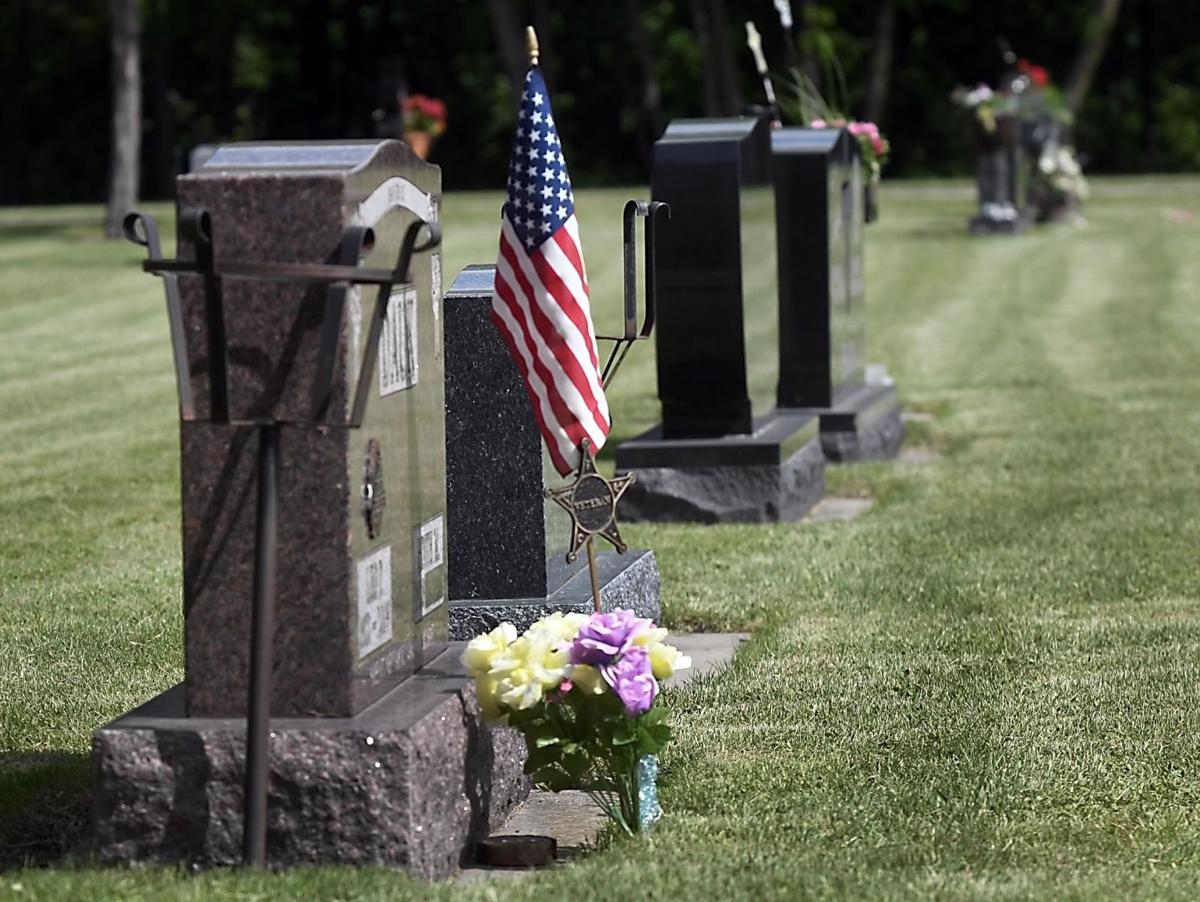 A flag flies near a veteran’s grave marker at Calvary Cemetery in May 2017.

Members of the Waseca-area Veterans of Foreign Wars rifle squad participate Saturday in a pre-taped Memorial Day ceremony to remember their deceased military comrades. The ceremony will be carried Monday on Waseca’s public access channel and on the city website. Groups throughout the region have opted to either cancel or make adaptations to their 2020 observances in response to the coronavirus pandemic.

A flag flies near a veteran’s grave marker at Calvary Cemetery in May 2017.

St. Peter American Legion Commander David Arpin had been especially looking forward to this year’s annual Memorial Day tribute to fallen comrades at Minnesota Square Park. However, Post 37 decided to cancel the typically well-attended observance in response to safety concerns about the spread of COVID-19.

“I am heartbroken. We were going to showcase the city’s new gazebo, with our veterans memorial in the background.

“It’s a missed opportunity during this unprecedented time, but we did this for the safety of the majority of our members and their spouses.”

Many post members fit in the high-risk categories for being in danger if they were to contract the highly-contagious coronavirus.

“Part of the problem was social distancing. ... We’d have to keep people apart. We’ve seen crowds in the hundreds,” Arpin said.

Most area veterans organizations have either canceled events or made plans for private ceremonies, such as wreath laying or color guard presentations.

Waseca County vets groups opted for memorial observance well in advance of the actual holiday. The ceremony was taped Saturday morning and is scheduled to air Monday on Waseca’s community access television station.

“The tape’s going to be played all day Monday and the city of Waseca will show it on its website,” said Grant Whissemore, an Army veteran.

“Yes, it disappointing to not have the outdoor program, but these are disappointing times for many and this problem is pretty insignificant compared to some problems others are having.

“It will also be good for the many seniors who would never have been able to get to the program.”

A lot of people from the Waseca and Janesville area helped plan the program, which includes a musical group’s performance, he said.

Waseca County’s Memorial Day Association is comprised of members of the American Legion and Veterans of Foreign Wars, along with other veterans from the community and a few people who did not serve in the military.

Organizations from his county had consistently put on Memorial Day programs annually since 1933. This year’s adaptation was a way to make the best out of an unusual situation created by a pandemic.

“But we did what we had to do,” Whissemore said.

“We should never forget the real reason for Memorial Day: to remember those veterans who have passed away.”

A sunny morning was much appreciated by the participating veterans groups during Saturday’s taping, he said, then recalled rainy Memorial Day ceremonies in the past.

When the holiday’s been too wet or cold for outdoor gatherings, the event would be moved indoors to a school auditorium. This year, school buildings throughout Minnesota are closed to the public.

While the distant sounds of gun salutes and bugle solos may be heard by area residents while outdoors on Memorial Day, veterans urge the public to stay away from their private observances.

Organizers of annual Mankato-North Mankato programs this year plan a ceremony that’s restricted to a handful of participating veterans.

“We won’t be going to the cemeteries — Minneopa, Decoria and Kasota — either,” said Mark Conrad, a member of American Legion Post 518.

“We do encourage people to go and pay their respects,” Conrad said.

The Minneopa Cemetery Board plans a 15-minute public ceremony 10:45 a.m. Monday at the historic cemetery southwest of Mankato.

“We are asking that people adhere to social distancing guidelines, and we’d like them to wear face masks,” said Dean Otto, secretary for the cemetery board.

Although the public is discouraged from most military tributes slated throughout the region, family and friends should feel free to privately honor deceased veterans by visiting their graves. Gates at cemeteries throughout the area are open and groups have been organized to place flags near veterans’ graves ahead of the holiday.

No ceremony is planned Monday at the rural Judson site, but its grounds will remain open, said Earl Taylor, a 50-year member of the Hebron Cemetery Board. He and his wife live on nearby property.

“We want the public to visit at their own convenience. They should feel free to bring flowers,” said Sharon Taylor.

Attendees at past Memorial Day ceremonies at Hebron have helped toward the cost of caring for the cemetery’s grounds.

Earl fears contributions may be down from amounts collected on previous holidays.

“This year, we are just going to have a box where they can leave donations,” he said.

The pandemic has already affected programs that assist people who served in the military and their families. Members of the veterans groups usually spend time in May stationed at various sites throughout communities, accepting contributions for assistance programs.

“We always used to go out and sell poppies just before Memorial Day. We didn’t get to do that,” said Vietnam veteran Tom McLaughlin.

This year, as a safety measure against anyone contracting the coronavirus, auxiliary members have placed donation cans on counters at various businesses. Coins and cash may be exchanged for traditional, handmade flowers.

Since the general public is discouraged from gathering in large numbers Monday, St. Peter American Legion Auxiliary members came up with a tasty alternative.

“We are offering an old-fashioned barbecue,” said Nancy Vogel, an auxiliary volunteer who is helping prepare food for Monday’s curbside service.

Pulled pork sandwiches may be ordered between 11 a.m. and 1 p.m. at the William R. Witty American Legion (Post 37) location, 229 W. Nassau St. Donations will be accepted.

Auxiliary members also will be selling protective face masks that may be worn to prevent the virus’s spread.