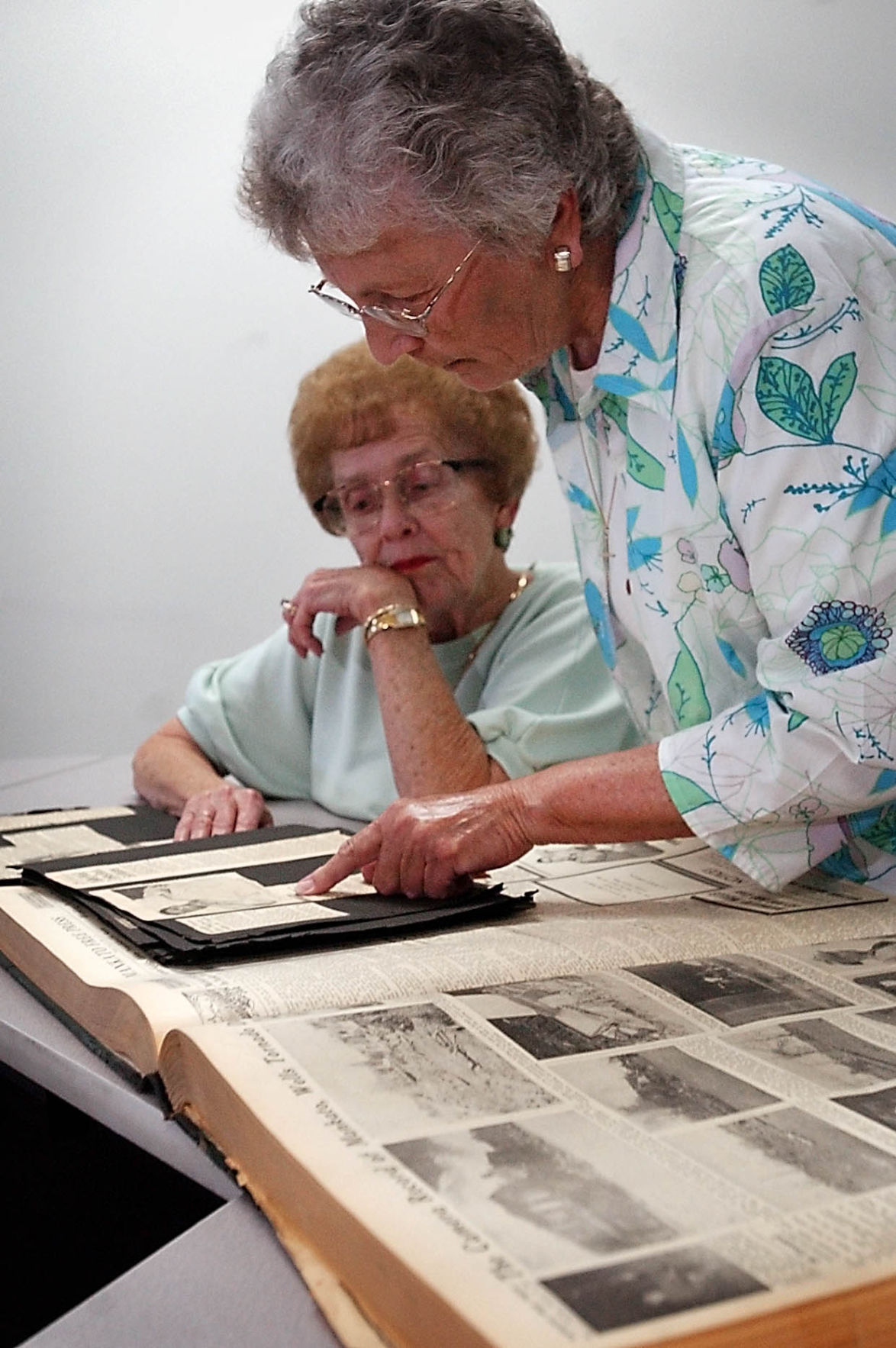 Patricia Benson (right) and Valerie Vogel look through a scrapbook and old newspapers describing a deadly F4 tornado that destroyed a resort south of Mankato in 1946 with its funnel, which was estimated at 400 yards wide. Vogel was living at the resort with her mom and brother for the summer because of a housing shortage. 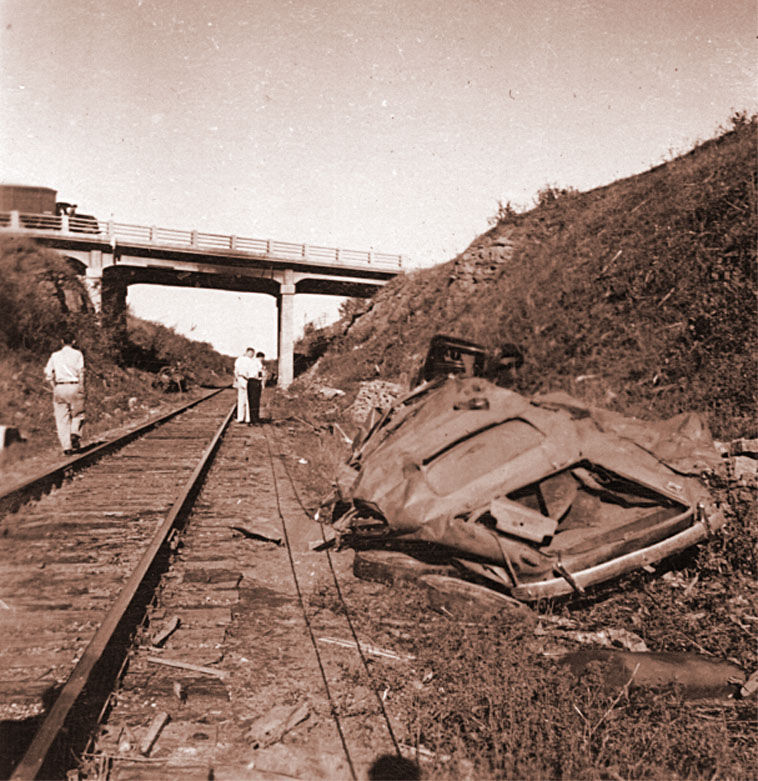 Dozens of cars were flattened by what the new Minnesota Weather Almanac calls “the famous Mankato tornado” of 1946. There were 11 people killed in the storm, which destroyed a resort that once stood near Minneopa Golf Club.

Patricia Benson (right) and Valerie Vogel look through a scrapbook and old newspapers describing a deadly F4 tornado that destroyed a resort south of Mankato in 1946 with its funnel, which was estimated at 400 yards wide. Vogel was living at the resort with her mom and brother for the summer because of a housing shortage.

Dozens of cars were flattened by what the new Minnesota Weather Almanac calls “the famous Mankato tornado” of 1946. There were 11 people killed in the storm, which destroyed a resort that once stood near Minneopa Golf Club.

It was a tornado so deadly and destructive it drew about 200,000 gawkers to Mankato, a number more than 10 times the city’s population at the time. One resident made an unofficial count of 60,000 cars passing on Highway 169 the day after the storm flattened the Green Gables resort across from what is still known as the Minneopa Golf Club. Sightseers from all over the region were driving by to look at what was left behind by one of the state’s worst tornadoes. All 26 cabins at the resort had been ripped from their foundations and scattered across the landscape. When the final tallies were complete, 11 people were dead and 100 had been treated for injuries at Mankato’s two hospitals. Veterans who were sent to help after the tornado hit on Aug. 17, 1946, told reporters the sight of wounded people wandering through piles of debris and around overturned cars reminded them of a war zone. It’s a scene Valerie Vogel and Patricia Benson, both 16 at the time, remember well nearly 60 years later. They were at Green Gables when the tornado hit, and only slightly injured because they happened to be in the shower house getting ready to go to a movie. It was the only building still standing after the storm had passed with its 250 mph winds. Vogel, who was still Valerie Sandvik back then, said she ducked down next to a couch in the dressing room as the wind howled and the rafters shook. “When it was over, Pat couldn’t find me because I was covered by all these cement blocks,” Vogel said. “After we crawled out the window, my first sight was a man covered in blood and hunched over like his back was broken.” Many people were screaming for help as others dug through the wreckage looking for loved ones. Vogel’s first reaction was to start leaping over downed power wires as she ran toward her cabin to look for her mother, Regina, and younger brother, Terry. Vogel found her mother in a tree. She had a slashed artery that was pumping blood out of her neck. Terry was about 5 feet away. His leg had snapped when he was thrown against a tree, an injury that got him one of the first rides into town. He was put into the back of a bread truck with three other people. Terry was the only one of the four still alive by the time the truck got to the hospital, Vogel said. “My mom had one hole in her leg that you could put your fist through,” she said. “It was awful.” Her mom and brother both survived. Terry’s leg and foot were even saved, but he spent weeks in the hospital recovering. Benson’s memories of the tornado aren’t as clear. She does vividly remember a crying baby, a road grader balancing on its roof, a steady stream of cars on the highway and her mother pacing outside their South Front Street home when she finally got back to Mankato that Saturday night. “Needless to say, it was an extremely scary thing to go through,” Benson said. “It’s just absolutely unbelievable that it happened 60 years ago already.” After destroying Green Gables, the tornado continued through Land of Memories Park, across the river and up the Lookout Drive bluff into North Mankato before disappearing, said Winston Grundmeier. He knew Vogel and Benson and remembers the commotion the storm caused in Mankato. About an hour later, another tornado struck Wells. The damage was worse there because the funnel went right through the city. No one was killed even though 400 people were inside the town’s theater when its roof collapsed. Only 30 people were injured in the theater. Those tornados are included in the “Minnesota Weather Almanac” written by University of Minnesota climatologist and meteorologist Mark Seeley and published by the Minnesota Historical Society this year. The book is full of weather facts and tidbits about hundreds of notable weather events during the past two centuries. In a state where temperatures can range from above 100 degrees in the summer to as cold as 60 degrees below zero, with windchills, in the winter, the book has been popular, said Seely, who is also a commentator for Minnesota Public Radio. He’s hoping the almanac gives people a way to see the state’s weather in a historical context. One way to do that is to talk about tornados and the impact they’ve had on each generation. “Every generation has its own set of weather stories,” he said. “Arguably, each generation has gone through some dramatic events, including floods, intense thunderstorms and numbers of tornadoes. I think putting things into context enriches our appreciation of the weather because it makes us appreciate other generations and what they had to go through.”