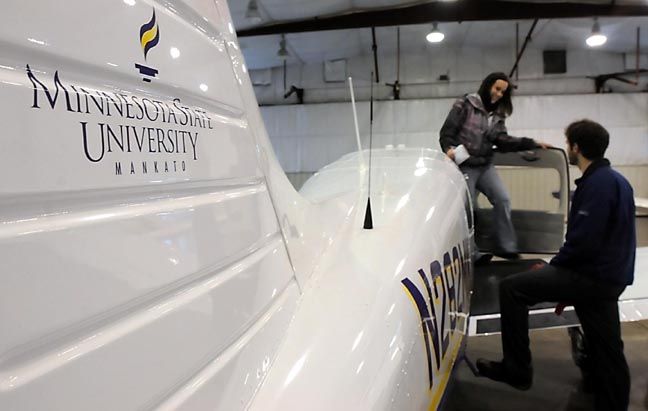 North Star Aviation owns the seven training aircraft Minnesota State University students use to get certified. Many of the trainers are current students seeking to add onto their own flight hours. 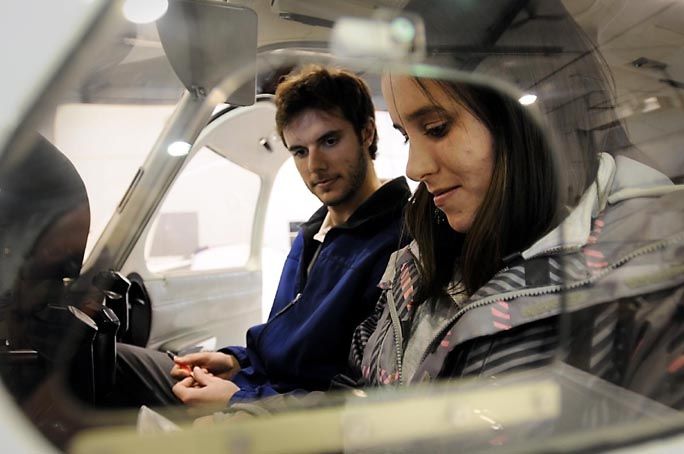 North Star Aviation owns the seven training aircraft Minnesota State University students use to get certified. Many of the trainers are current students seeking to add onto their own flight hours.

Aviation students tend to describe a single, life-changing flight like it’s a drug.

Jason Ceminsky, a part-time flight instructor, said “you have one flight and it’s just ‘What I wanna do.’”

More than most college students, the pilots in training structure their lives around flying. They spend $50,000 or $100,000 on flight time alone — above and beyond tuition.

And if students have to choose between Mankato and flight school, then there’s little doubt what’ll happen.

“If they can’t get it at MSU, they’re going somewhere else,” Ceminsky said.

The university’s share of the state’s budget shortfall is somewhere in the $6 million to $10 million range. Last month, MSU identified programs slated for cuts or elimination, including the aviation department. Eliminating the program would save an estimated $400,000.

There are more than 15 programs that could be eliminated, but aviation has more complex relationships with local business and government, not to mention its students.

The students and faculty — as well as the company that does flight training, North Star Aviation, and even the city of Mankato — are making a two-pronged argument to save the program.

First, they say ending the program would create a disproportionate impact on the community, especially on the airport, company and students.

University administrators say they’re listening to those arguments. But they call aviation a high-cost, low-enrollment program and say painful cuts need to be made somewhere.

The university is making final decisions about which programs to cut by March 1. The cuts will begin to take effect in the fall of 2011.

Nihad Daidzic was hired as the department chair for aviation in the fall of 2006 with a mandate to rebuild the program.

Former chair John Roberts had been let go for collecting fees from the administration of flight tests to students, causing the program’s reputation and enrollment to suffer.

But by 2007 the program got a bigger marketing budget, new professors and new planes — technically owned by North Star Aviation but used for flight training.

Daidzic said he and other faculty are successfully rebuilding the program. “We delivered,” he said.

He said the university is using data from as old as 2003 to make the decision about what cuts to make, back when the aviation program was still in the doldrums.

Students, at least the pair who showed up when a reporter toured the airport recently, are positive about the program.

Katrina Avery, an aviation senior, said she had planned to attend the largest flight school in the region, the University of North Dakota. But she changed her mind after making a campus visit to Grand Forks.

Minnesota State University is hardly small, but the aviation students act like a close-knit group, Avery said, hanging out with each other outside of class. Most of the flight instructors are students themselves.

Seniors who are licensed to teach but still need to rack up costly flight hours for advanced certification often elect to help their younger brethren get licensed.

Choosing what to cut

The university is using metrics — data-based strategies to determine the value of programs — and more qualitative judgments like whether a program is central to the mission of its department and the wider university.

As far as metrics, aviation is a “high-cost, low-enrollment” program, Dean of Education Michael Miller said. The aviation program is in the college of education (more on that in a bit).

While students bear the cost of flight training, the university continues to pay for a renovation of the airport, for flight simulators, ongoing maintenance as well as the costs associated with resurrecting the program.

“During that time, the program has lost a lot of money for the institution,” Miller said.

Using a measure called credit hours per full-time faculty equivalent, he said the aviation program is the most efficient in the college of education if adjunct instructors are included.

Miller has also been looking for “other configurations or partnerships” to help MSU continue the program but more cheaply.

One idea raised by university administrators is to have the flight school portion of the program transferred to a technical college, perhaps South Central College in North Mankato, but have MSU retain the classroom instruction.

It has not gone over well.

“If you want to get hired by a major airline, you have to have a major degree,” said Tom Peterson, an assistant professor of aviation.

The standard for commercial airline jobs is increasingly becoming a degree from an accredited, four-year college, Daidzic said.

Daidzic said the standards were waived for graduates of accredited colleges.

SCC President Keith Stover said through a representative that he had no comment on the suggestion that SCC would take over part of the program.

Daidzic also acknowledges aviation is “obviously, sort of a misfit” in the college of education.

Miller, the education dean, said there are certain things — like a registrar or an English department — that you can’t imagine a university going without.

Likewise, there are certain departments that an education college couldn’t go without. Aviation isn’t one of them.

University students account for perhaps two-thirds of the takeoffs and landings at the city-owned airport. That figure may exaggerate their use of the airport considering they take off and land frequently to practice, but if the program left there’s little doubt the airport will suffer.

Without the student traffic, Airport Manager Kevin Baker said it would be difficult to justify airport upgrades to the Federal Aviation Administration, which typically pays most of airport improvements. Recent examples of work include $12 million to extend a runway from 5,400 feet to 6,600 feet and $1.4 million to re-pave the smaller runway.

North Star Aviation would likely have to lay off most of its 15 or so flight instructors. It employs 40 people total, but it’s unclear how many would remain employed because of the company’s contract with the city.

The university’s monthly payments to the city for renovations at the airport may also stop, though the city has said it would expect the university to keep paying because the work was undertaken to benefit MSU.

Miller said he understands these impacts but “programs do have to be cut at the university in order to make budget when we’re downsizing our faculty by a sixth.”