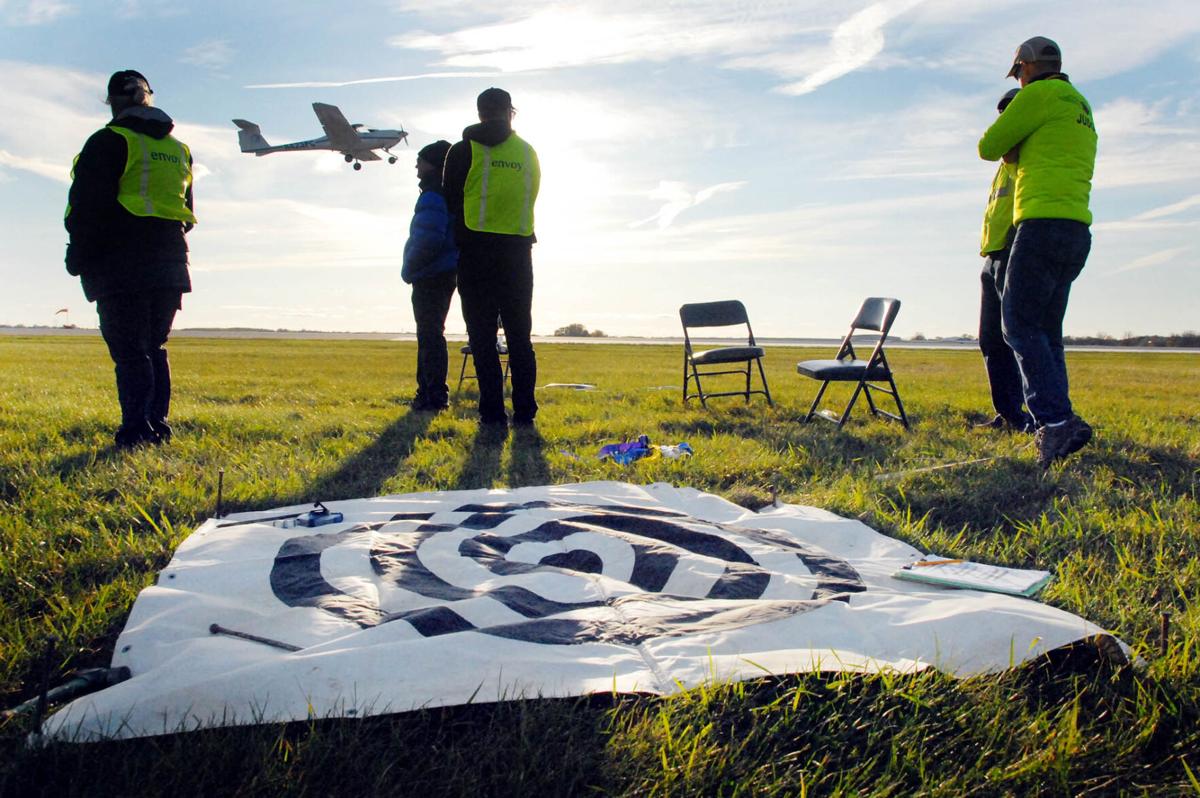 Judges watch as participants in the National Intercollegiate Flying Association Region VI SAFECON competition held at the Mankato Airport take off to participate in a message drop. 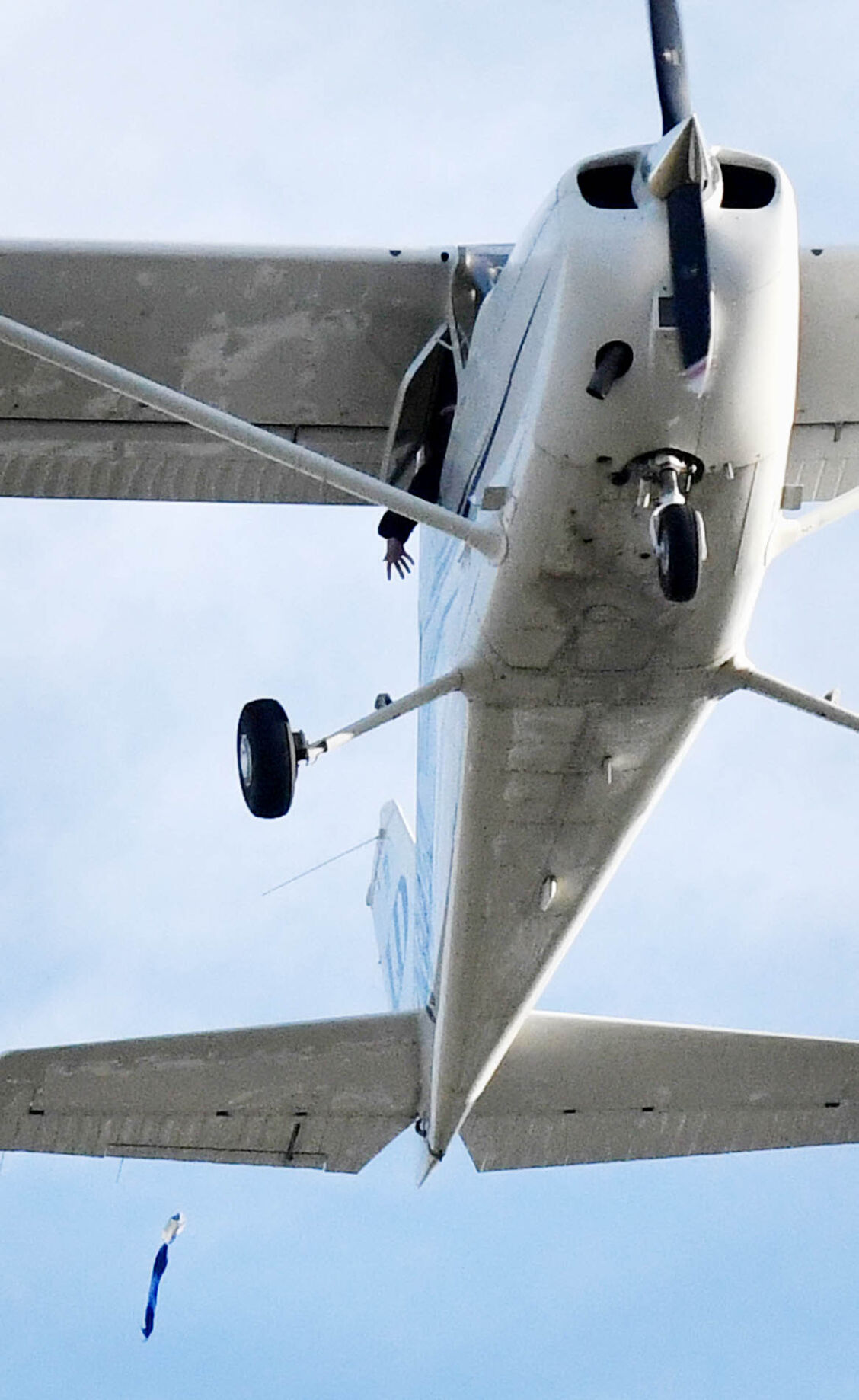 It’s “bombs away” as a competitor in the regional NIFA message drop competition drops a weighted streamer from an altitude of 200 feet. 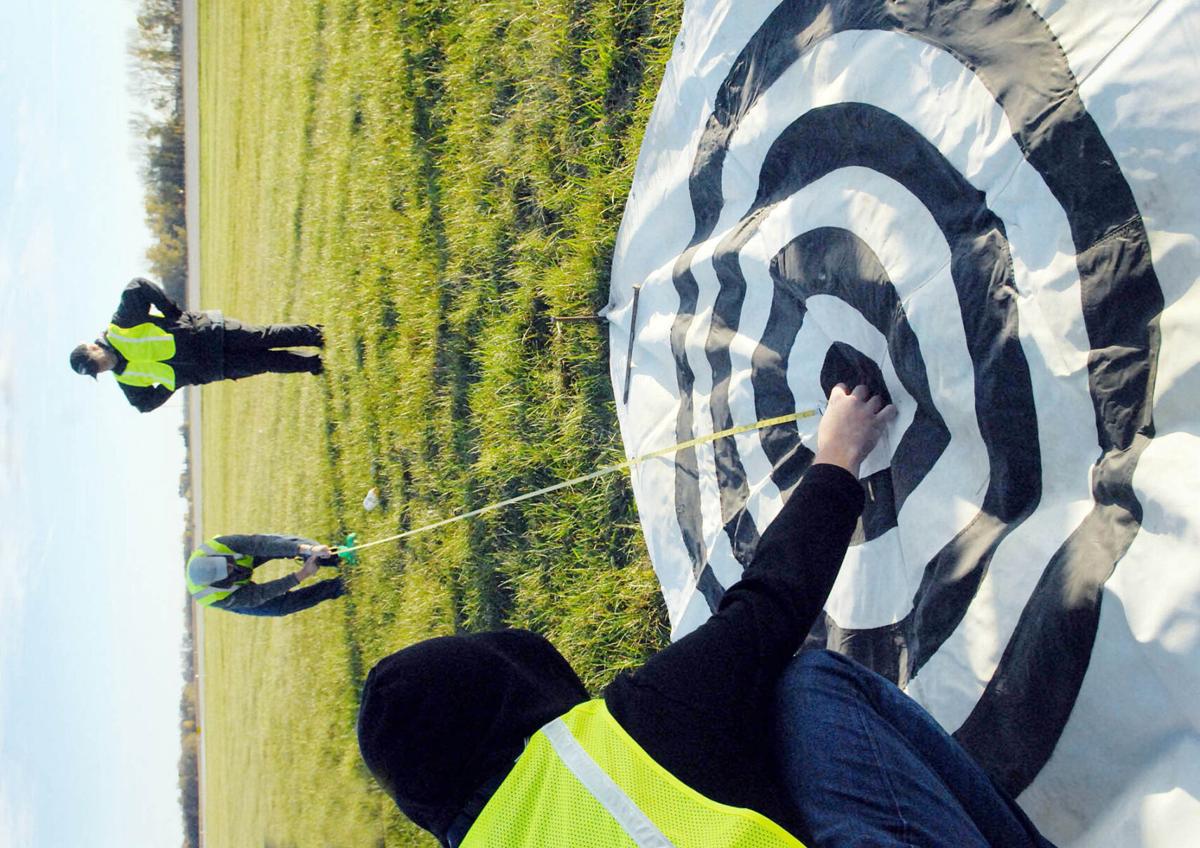 Judges measure to how close National Intercollegiate Flying Association contestants were able to drop a "message" to a target while flying by at an altitude of 200 feet. 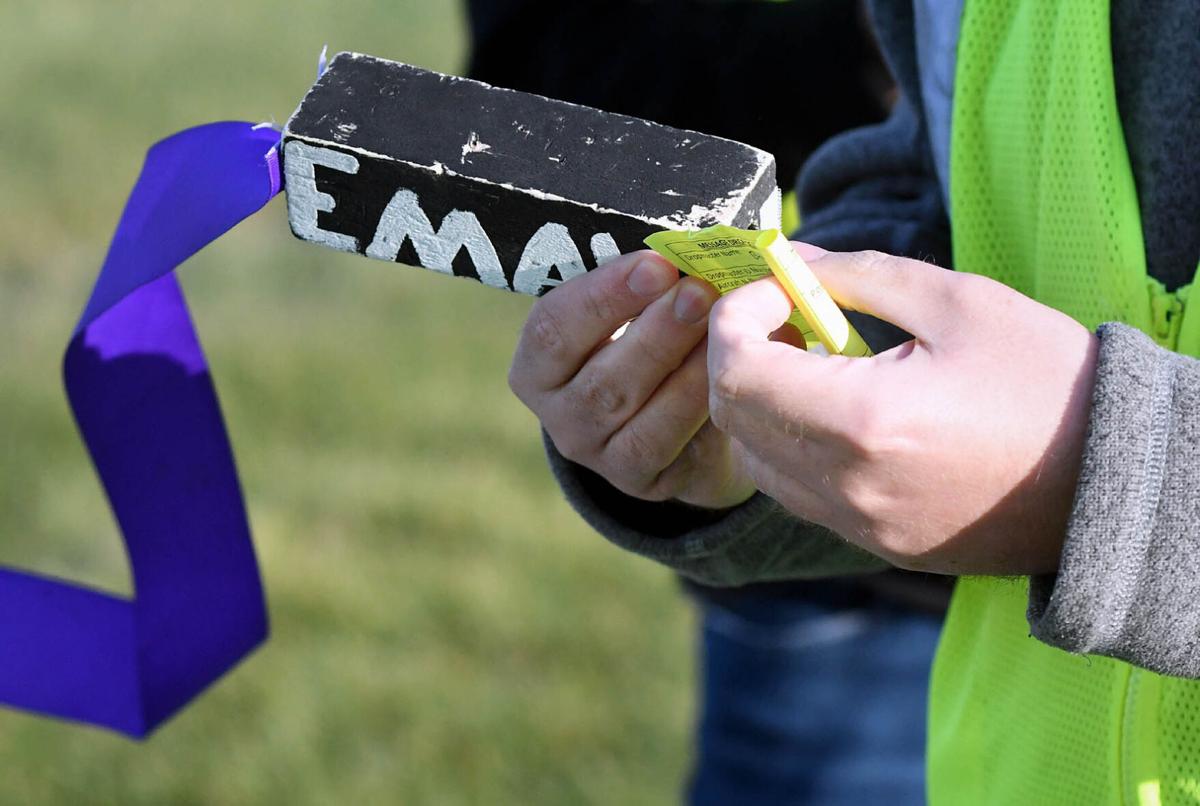 Judges watch as participants in the National Intercollegiate Flying Association Region VI SAFECON competition held at the Mankato Airport take off to participate in a message drop.

It’s “bombs away” as a competitor in the regional NIFA message drop competition drops a weighted streamer from an altitude of 200 feet.

Judges measure to how close National Intercollegiate Flying Association contestants were able to drop a "message" to a target while flying by at an altitude of 200 feet.

MANKATO — On this week’s schedule, the Minnesota State University Mavericks were competing in soccer and volleyball on the road and in simulated comprehensive aircraft navigation and short-field landing accuracy at home.

Cathy Plasschaert, one of the three coaches for the MSU Aviation Team, was cautiously optimistic about the squad’s chances.

“We are trying very hard to make nationals,” Plasschaert said. “We’re hoping the home-team advantage helps us out.”

MSU is hosting eight other universities in the midwestern regional of the 2021 National Intercollegiate Flying Association competition. Student pilots from schools stretching from Missouri to North Dakota were squaring off on the ground and in the air, doing aviation-related math, identifying aircraft, spotting airplane maintenance issues, demonstrating navigational skills and — at the end — showing off their flying chops.

It’s a competition that dates back 101 years to when aviators were returning to college from service in World War I.

Plasschaert, a Delta Airlines captain and an instructor in MSU’s aviation program, doesn’t know how long MSU has been competing, but it’s been decades.

“I participated when I was in college, gosh, 30 years ago,” she said.

Now she coaches the 39 aviation students on the team, 18 of whom were selected to represent MSU in the four-day competition.

The event is sort of like a track and field meet with multiple contests testing a multitude of skills. The team’s top performers in each of 11 disciplines are chosen to participate, with several competing in two or more.

“We train all semester. We pick the top five in each event,” she said. “It’s all on merit.”

In the other written test, contestants race the clock to solve mathematical flight-planning computations involving speed, time, distance, corrections for wind and more.

Using a simulator at the Mankato Regional Airport, Anderson will also be competing to show his abilities in instrument-flying — essentially as if he were flying through pea-soup fog from takeoff to landing.

And, finally, Anderson was set to get off the ground in the “Power Off Landing Event,” a competition where pilots must drop the engine speed on their airplane to idle while preparing to land, essentially gliding to the runway.

“You simulate that you lose your engine,” he said.

For obvious reasons, team members must compete in the ground events if they want to participate in the flying contests.

In his three years on the team, though, the ground events have become increasingly appealing to him — even the math-heavy tests, one of which once asked him to calculate the number of times a 747’s tire would rotate based on its diameter and a landing covering 6,000 feet from touchdown to a complete stop.

“It sounds awful, but it’s actually quite fun,” said Anderson, a team captain the past two years. “... It makes you use your brain.”

Among other ground events are an aircraft-recognition contest, where photographs of various aircraft are shown for three seconds and competitors have 15 seconds to list the manufacturer, the model and any common nickname. And there’s the preflight inspection event where contestants have to look over an aircraft that’s been “bugged out” with numerous defects that make it unairworthy.

It could be indications of a fluid leak, a broken switch, a crack, or the absence of required paperwork such as an airworthiness certificate.

And the testers can get creative. The lights on the wingtips might both be working just fine. But is the one on the left wing green instead of red and the one on the right wing red instead of green? That event, too, is timed and, Plasschaert said, the contestants might even be handed flashlights and told they have to do it in the dark.

Most of the competitions test skills necessary to be a good pilot, the preflight inspection event being an obvious example. Plasschaert said that she, even serving as a captain for a major airline where maintenance crews conduct a thorough exam of her passenger jet before it flies, still does her own preflight inspection each and every time as well.

Other events, in the age of GPS and powerful computers, harken back to an era when pilots stayed on course using dead-reckoning or matched maps with visible landmarks.

But everything about the week is aimed at encouraging better, safer, more knowledgeable pilots.

“What this really does is help you get the in-depth understanding of why and how things work,” Anderson said.

As a bonus, it encourages the formation of friendships across universities that can pay off in the relatively tight-knit aviation industry.

“This is a wonderful opportunity to make those connections early,” he said. “One of these people you compete with could be the person that hires you in the future.”

It is, however, still a competition. Plasschaert, while serving as a host to this year’s regional and thankful for all the companies that helped the university pull off the event, is still a Maverick at heart. That much is clear when asked for an analysis of her team’s relative strength.

Anderson, a three-sport athlete in high school, said there are some similarities to athletics.

“It’s the ability to compete at the thing you love,” he said.

In at least one aspect, it’s a bit different from the intercollegiate sports being practiced by other Mavericks teams.

“We’re probably not going to have fans rooting and cheering for us,” Anderson said, although he wouldn’t mind if the Maverick Machine showed up to play the MSU Rouser as his team went into its flight navigation competition.

“It’d be kind of funny if the band was playing for us as we took our test.”

The winners of the regional will be announced at a wrap-up banquet Saturday afternoon in the Centennial Student Union. Four teams are expected to advance to the nationals in May.