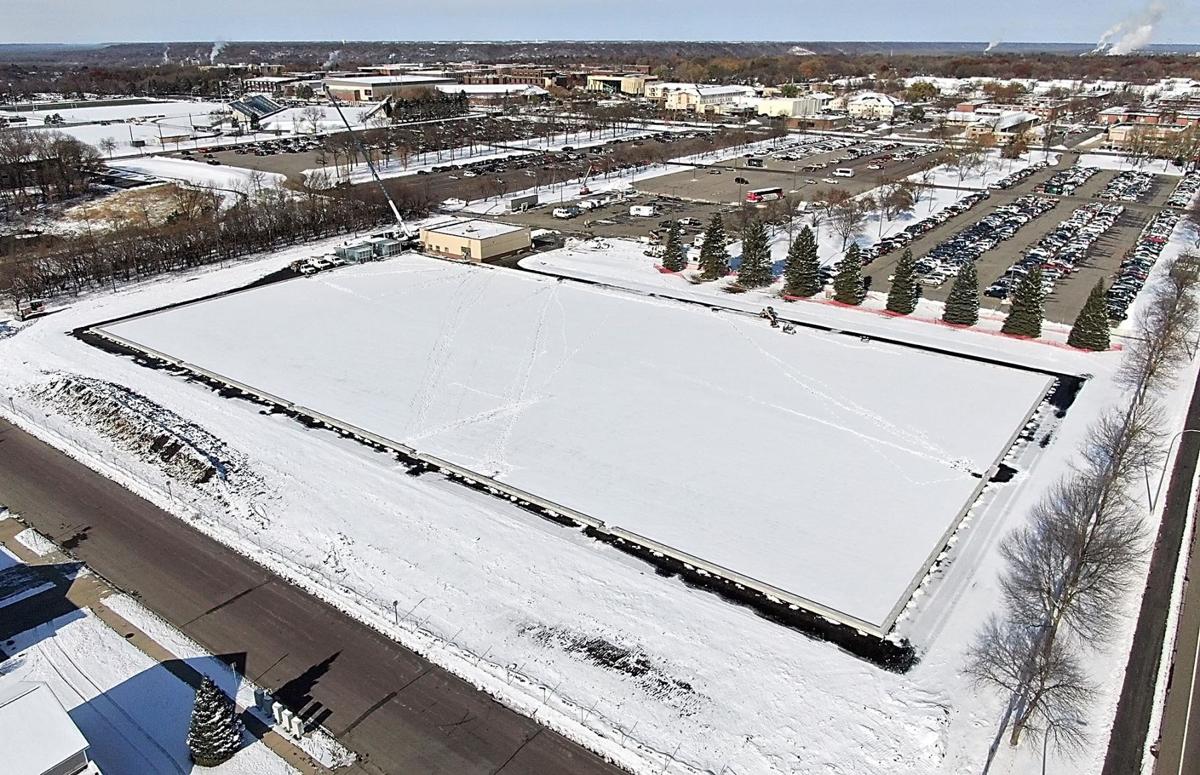 An early snowfall covered the recently installed artificial turf at the MSU All-Sports Dome, but the mammoth field will be under a climate-controlled inflated bubble as soon as Nov 25. 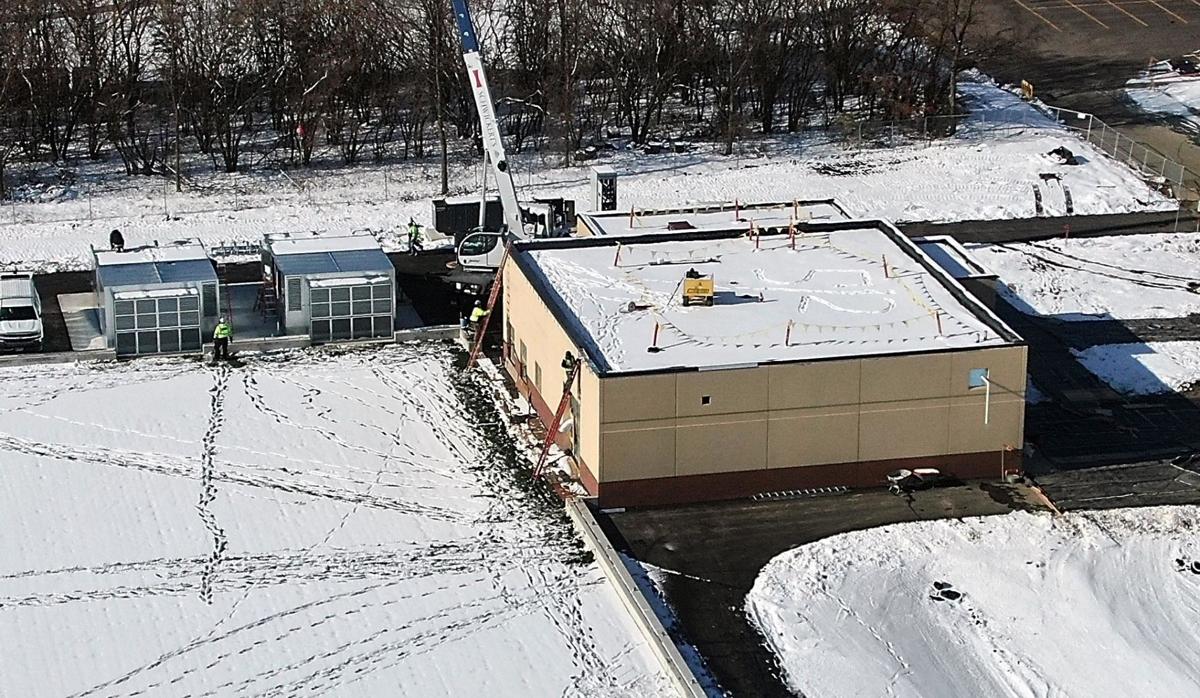 A construction crew put finishing touches on the powerful fans and the building that will provide a lobby, restrooms and storage space for the soon-to-be-inflated sports bubble at Minnesota State University.

An early snowfall covered the recently installed artificial turf at the MSU All-Sports Dome, but the mammoth field will be under a climate-controlled inflated bubble as soon as Nov 25.

A construction crew put finishing touches on the powerful fans and the building that will provide a lobby, restrooms and storage space for the soon-to-be-inflated sports bubble at Minnesota State University.

For one 2.5-acre slice of Mankato, south-central Minnesotans won’t have to wonder when winter will come to an end. Spring-like temperatures and green snow-free turf are scheduled for Nov. 25 on the southeastern edge of the Minnesota State University campus.

“Obviously, with the weather that may be adjusted a day or two,” said David Jones, vice president of student affairs at Minnesota State University.

But the long-awaited Maverick All-Sports Dome is now just a couple of weeks from inflation and a month away from opening to the public.

The arrival of the double-layer of roofing material for the dome is expected as soon as Monday. After the fabric pieces are laid out, attached to the foundation and connected together, the roof will be ready to be lifted into place by air pressure from massive fans.

“Once it’s inflated, at that point they’ll start hanging the lights,” Jones said. “Our first official use is scheduled for Dec. 13. I believe it’s youth football.”

He expects a public open house to be held sometime during the week of Dec. 9.

“Some people have probably never been in one, so they can just come and see it,” he said.

Roughly a third of the dome’s time is to be consumed by intramural sports and other campus recreation activities by average MSU students. Another third will be dedicated to Mavericks’ intercollegiate sports teams for practices and even — in the case of softball — games. The final third is targeted at community use, particularly youth sports teams, who will help finance the dome’s $300,000 in anticipated annual operational costs through rental payments.

A sports dome has been a dream of youth sports groups for decades, and they ended up getting a larger-than-average facility — as big as one and a half soccer fields.

An MSU alum is already attempting to set up a seven-on-seven winter football league for young players in the dome’s inaugural year, said Dennis Hood, president of the Mankato-North Mankato Youth Football Association. The association, though, will probably wait until the winter of 2020-21 to do the same.

With rental rates running as high as $450 per hour for the entire dome during prime hours ($150 for a third of the space), financial constraints will limit how much the association can use the facility, Hood said. He hopes other options will arise, including a possible field house or sports bubble at Bethany Lutheran College, to provide competition for the MSU dome.

But Hood sees climate-controlled indoor space as a good investment in kids’ health.

“Some of the kids will sharpen up their skills. Others are going to be out there for the camaraderie and to get a little exercise,” he said, adding that some youngsters just don’t connect with traditional wintertime sports. “Not everybody wants to play basketball. Not everybody looks good in a singlet. And hockey is very expensive.”

While rental costs can be daunting for youth teams, they’ve been locking in their reservations even before construction is complete.

“We have 10 different groups who have rented the dome time totaling 940 hours,” Jones said.

The rentals include university sports teams — who typically will use the facility during weekday work/school times — if they’re seeking extra hours in the evening or on weekends. But reservations are also being made by area high school teams and youth groups.

Some rentals, particularly for soccer, have included the entire dome. In other cases, groups are renting a third of the facility, which can be divided so that multiple uses can occur simultaneously.

Nearly 60 hours have been reserved for girls fastpitch softball practices and clinics.

“We’re pretty fortunate MSU built the bubble,” said Matt Mangulis, vice president of the Mankato Area Girls Fastpitch Association. “And we were one of the first to sign up.”

For dedicated softball players, winter workouts and games in a dome won’t be a novelty. Those previous experiences, however, have required long drives to places like Rosemount and Austin.

“It’s a lot of travel in the dead of winter,” Mangulis said.

The alternative has been softball in a gymnasium — which means playing on wooden floors with indoor softballs and low ceilings. The dome, with its lofty roof and artificial turf, will allow the girls to work on all of their skills including shagging fly balls and even playing regulation games.

“There’s no replacement for game experience,” he said, predicting MAGFA will see new members from places like New Ulm and Sleepy Eye that are even farther than Mankato from existing domes.

Adults in the community will also have a shot at some summertime activities in the midst of winter. Plans are in place for some of the facility’s time to be set aside for general community use — including lunch-hour open soccer and $5 “Open Dome Time” where people could just bring a frisbee, toss a football or play catch.

“I tell you, it’s just going to be fantastic — a little bit of a break from the Minnesota winter,” Hood said. “I think they’re going to have a major response from the community.”

The dome, which will be deflated and put in storage six months of the year, will typically close by April 1. With the facility not opening until mid-December in its inaugural year, Jones expects it will remain in use until mid-May of 2020.