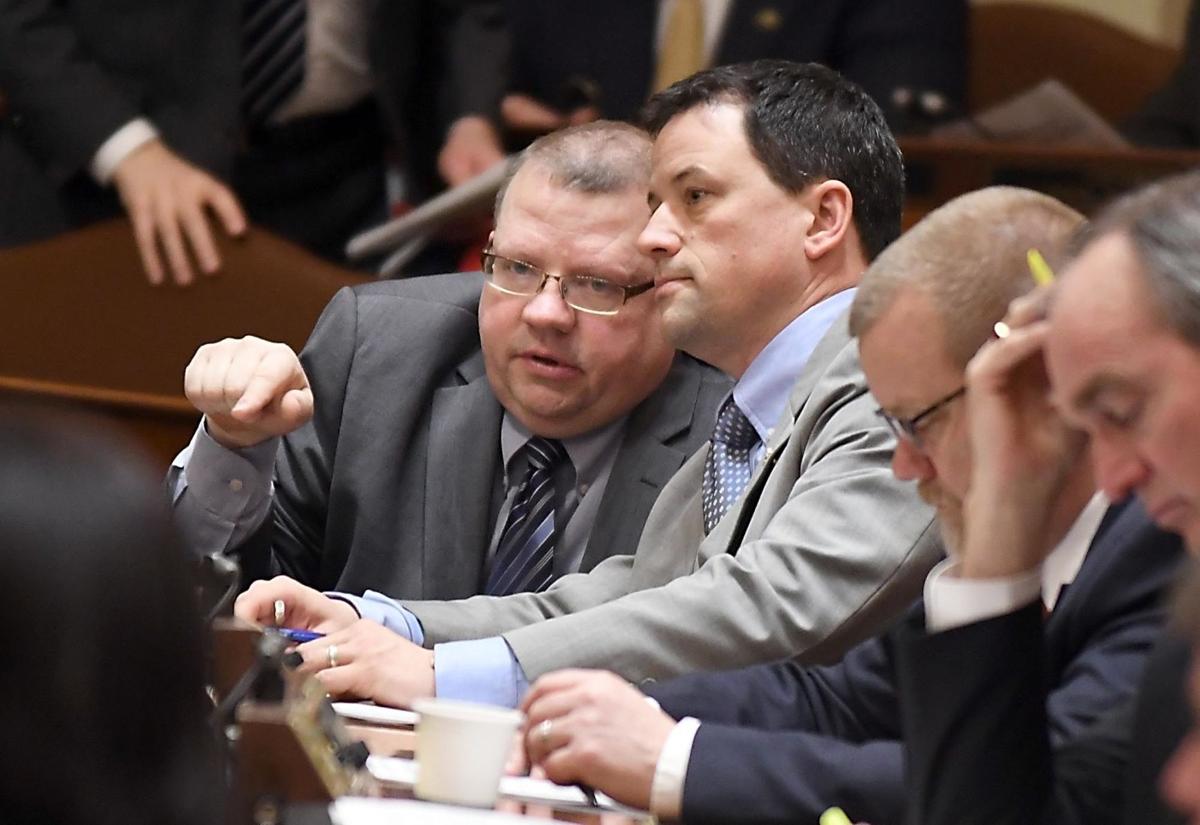 Rep. Jeremy Munson (right) talks with fellow Rep. Ron Kresha after being sworn in at the start of the legislative session Tuesday. Photo by Pat Christman 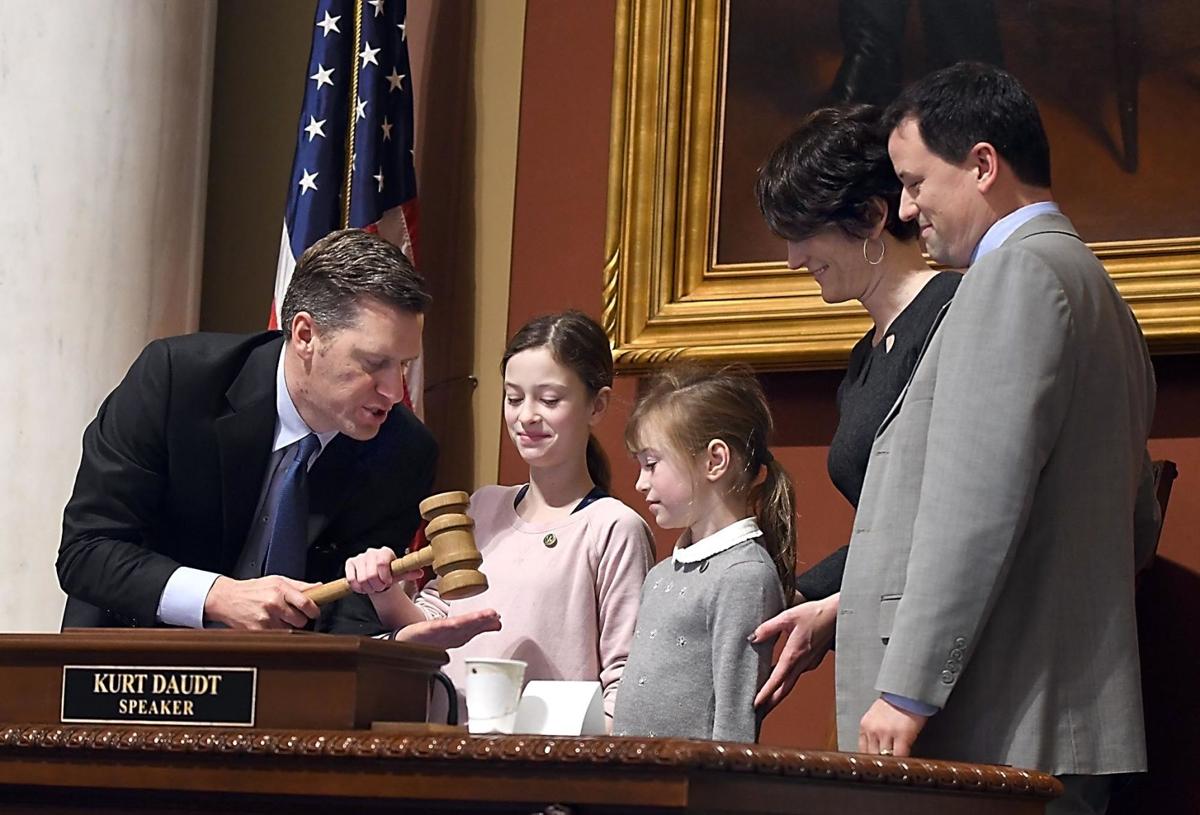 Rep. Jeremy Munson (right), his wife, Kallie, and his daughters, Stella and Gretta, talk with House Speaker Kurt Daudt after the beginning of the legislative session Tuesday in St. Paul. Photo by Pat Christman 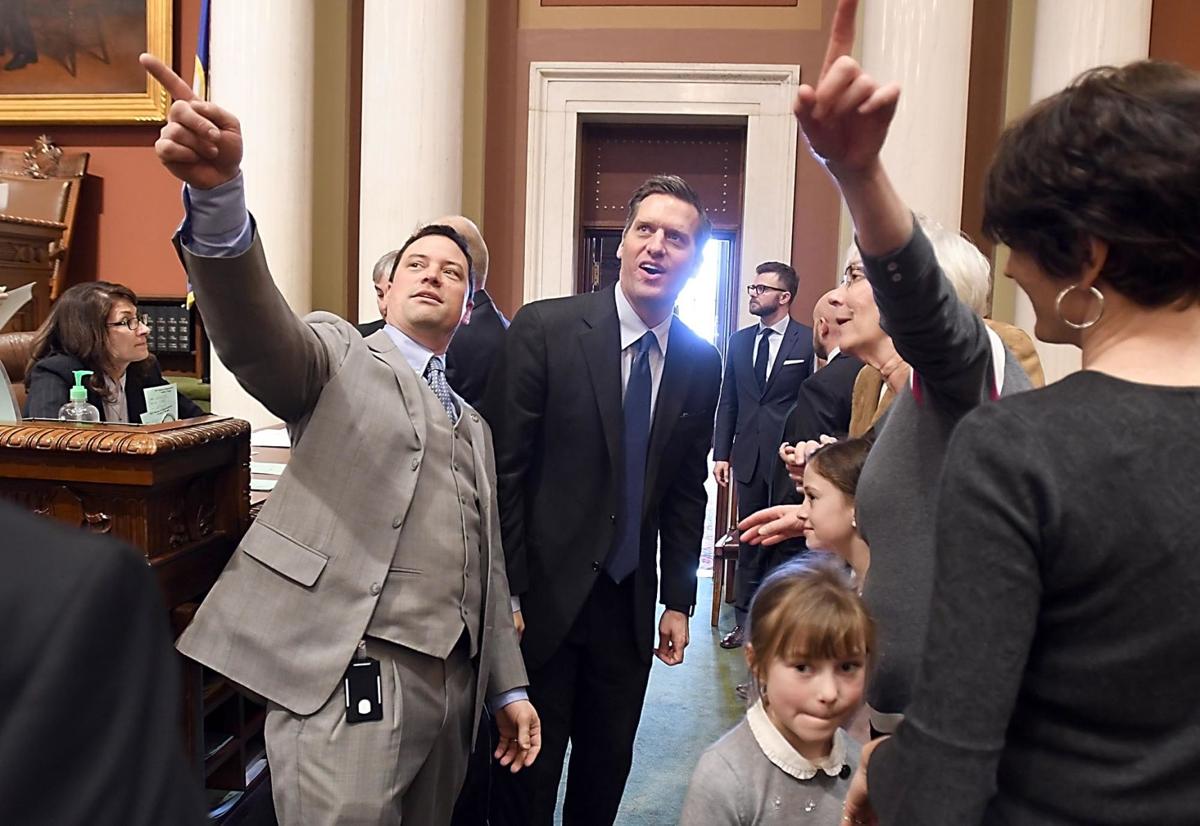 Rep. Jeremy Munson points out additional members of his family in the gallery to House Speaker Kurt Daudt after the start of the legislative session Tuesday. Photo by Pat Christman

Newly elected Rep. Jeremy Munson is sworn in by House Speaker Kurt Daudt before the start of the legislative session Tuesday. Photo by Pat Christman

ST. PAUL — Contrary to what some may think, it's not fun and games being a lawmaker.

Instead of touring the Minnesota Capitol with his family, Rep. Jeremy Munson, R-Lake Crystal, got a crash course in being a legislator Tuesday morning.

Rather than learn about past state governors, Munson learned about legislative procedure. Interesting murals? Try committee assignments instead. And let's not forget about caucus meetings and tax conformity.

Such is the life for Munson, Minnesota's newest state representative and now the representative of District 23B — which covers parts of Blue Earth, Watonwan, Waseca and Le Sueur counties. Munson was sworn in as a state lawmaker Tuesday, the first day of the 2018 legislative session.

"I'm just getting up to speed on the process," he said Tuesday morning. "It's important to just understand how everything functions."

The Lake Crystal businessman's experience as a hops farmer should serve him well during the upcoming legislative session — Munson was named to the House's ag policy and ag finance committees, as well as the jobs and energy committee and the health and human services reform committee.

Health care is one of Munson's top priorities as a lawmaker. He touted his experience as a small-business owner who had to go without health insurance this year as part of his message to voters during the special election.

"In our district, especially for farmers, I think health insurance and taxes are the biggest issues," he said. "They don't put freshmen on the tax committee, but being on two ag committees is important, and creating jobs in our district is important."

The state Department of Health announced Tuesday a survey showed Minnesota's uninsured rate rose from 4.3 percent of the state's population in 2015 to 6.3 percent last year. That means about 116,000 more Minnesotans were uninsured in 2017 compared to two years prior, and about 349,000 people are uninsured throughout the state.

Munson said he's committed to attempting to reduce costs in medical procedures through price transparency regulations, an idea that has found support on both sides of the political aisle.

"It's going to be a big win for everybody," Munson said. "It only improves services and quality."