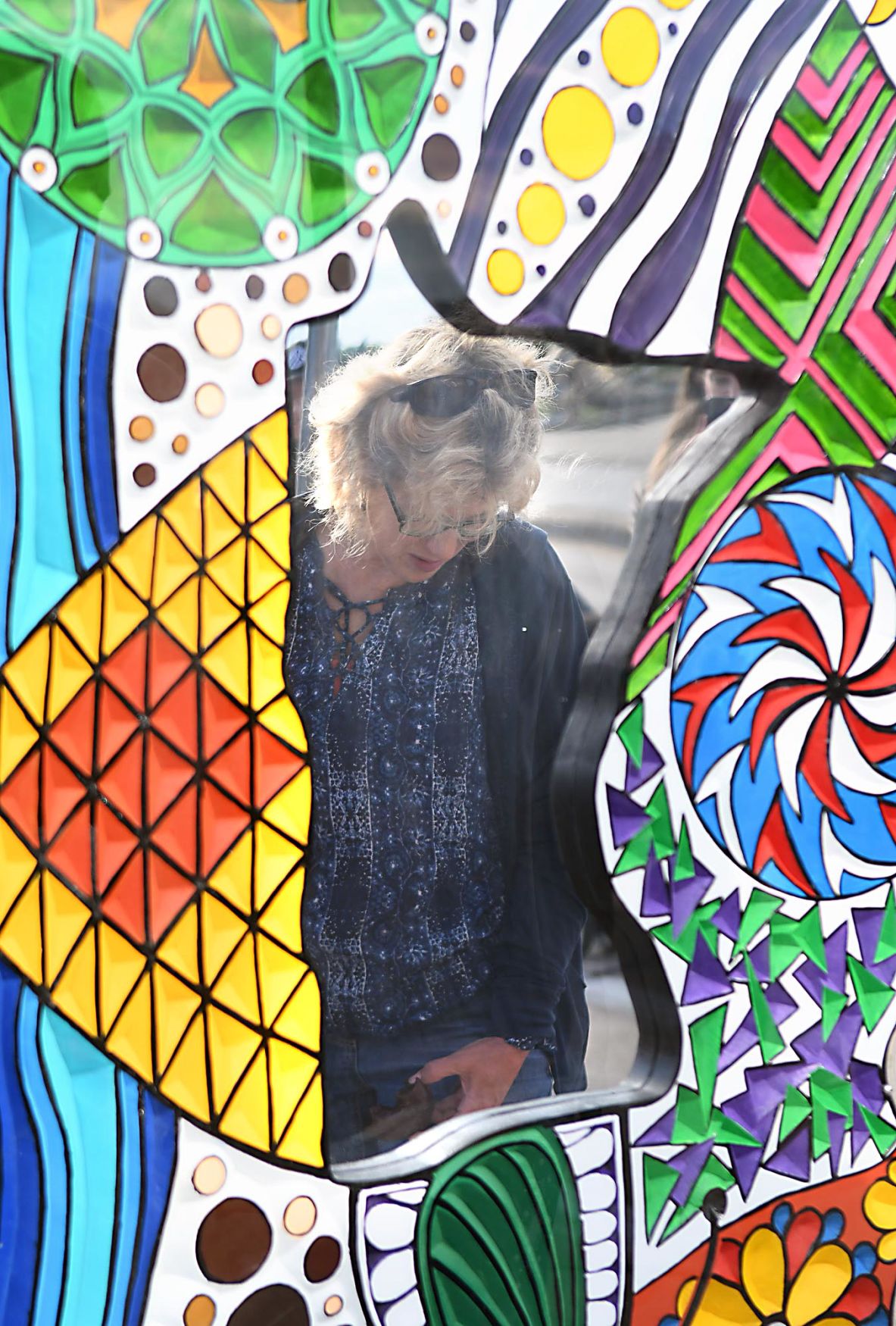 Shelley Leenhouts is reflected in her husband’s chip carving sculpture You after its installation Saturday. 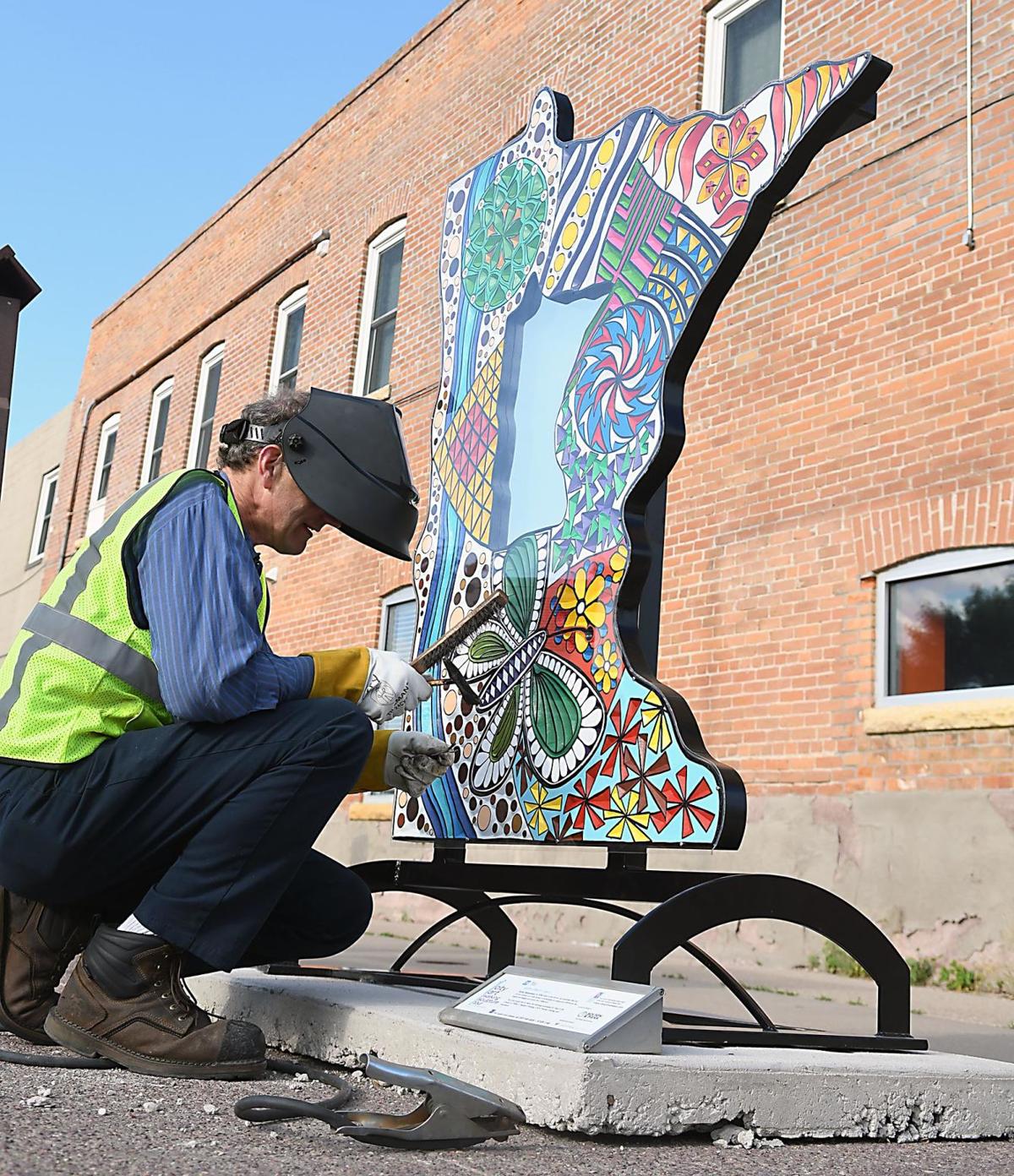 Martin Leenhouts and his wife, Shelley, talk with friends and family after the installation of his sculpture You on this year’s CityArt Walking Sculpture Tour Saturday.

Shelley Leenhouts is reflected in her husband’s chip carving sculpture You after its installation Saturday.

Marty Leenhouts of Garden City took his first shot this year at entering a sculpture into the CityArt Walking Sculpture Tour.

“It’s the first time I tried, so I’m pretty happy to get in,” said Leenhouts, whose large chip carving work was being installed at the corner of Belgrade and Nicollet avenues in North Mankato early Saturday morning.

Leenhouts, who runs a chip carving business and operates the Red Barn Retreats, took on his largest project ever when he was accepted into the sculpture tour. While he usually works in wood, his 4-foot-by-6-foot work is carved into high-density urethane, a material favored by sign makers because it is soft to carve, holds up to the weather and can be covered with any finish.

The piece, titled You, features an outline of Minnesota with a mirror in the middle. “The outside is hand carved and painted. When you look in the mirror, you see the complexity of the outside area and it shows you’re a valuable part of Minnesota. With everything going on right now, it’s pretty timely,” Leenhouts said.

Janie Hanson, interim director of Twin Rivers Council for the Arts, said it’s enjoyable to see so many locals and people from the surrounding area come to enjoy the sculptures each year.

“It’s really exciting that Mankato is continuing with it when a lot of communities postponed theirs until next year.”

“It’s a great activity you can still do with social distancing.”

Tami Paulsen, City Art chair, said that because of the pandemic, they had to cancel the artists reception, Kiwanis breakfast and other events tied to the sculpture tour.

They also had to do some scrambling to ensure they had enough sculptures. Sculpture tours from different cities often share sculptures that haven’t been sold, sending them to other cities for their tours. But with many cities canceling events and leaving existing sculptures up for another year, there weren’t as many available.

“We didn’t get some of the pieces we expected from other programs. We got some pieces directly from the artists. As it’s grown here, we’ve had more relationships with artists, which helped.”

While events had to be canceled this year, Paulsen said they’re already looking to a bigger and better tour next year to mark the tour’s 10th anniversary.

Jon Kamrath, of Mahtomedi, was helping install his steel Great Blue Heron sculpture just off the end of the Veterans Bridge in Mankato.

“We live on a tiny lake and there’s some herons there. They’re awkward when they walk but very graceful flying. We have a plastic owl on our dock and sometimes the herons attack it. Our kids think it’s hilarious.”

Kamrath has been in the Sioux Falls sculpture tour, but this is his first time in Mankato’s. He spent the night in town with his kids and wife Heidi (Meiers), who grew up here.

Kamrath has sketch books full of potential sculptures. “When I settle on one I like, I weld together a one-eighth scale model. That’s when you see all the problems with a piece and decide how to solve it or decide it’s not worth solving.”

Leenhouts has been fascinated with woodworking and carving since he was a kid who took shop class.

Chip carving involves using knives to remove small chips of the material from a flat surface in a single piece, creating intricate patterns and designs.

A teacher by trade, Leenhouts, 62, has made chip carving his full-time business for the past 12 years, making and selling his own chip carving knives and teaching classes on carving. He also sells pieces he’s chip carved.

While he got to do a large, artistic piece for the sculpture tour, he usually carves on boxes and kitchen utensils. “I like chip carving because it’s so precise, and I’m pretty much a perfectionist, so I like it. And I like making things that are utilitarian.”

A Wisconsin native, he and his wife taught around the world at private schools, including in Indonesia and at Native American schools.

His wife, Shelley (Thompson), grew up near Garden City and they moved to her family farm more than 20 years ago. She teaches adult basic education for Mankato Area Public Schools.

The support for public art has allowed CityArt to expand into new public art initiatives including, CityArt On the Go (traffic signal boxes art and murals), the Mni Mural (flood wall mural) and the most current project, the Silo Art Project. (Mni means water in the Dakota language.)

“It is wonderful to see the tremendous growth and success of the CityArt program since its inception in 2011,” Paulsen said.

For more information on the sculpture tour and other CityArt initiatives, visit: cityartmankato.com.

The 2020-2021 edition of the CityArt Walking Sculpture Tour was installed in Mankato and North Mankato Saturday morning.