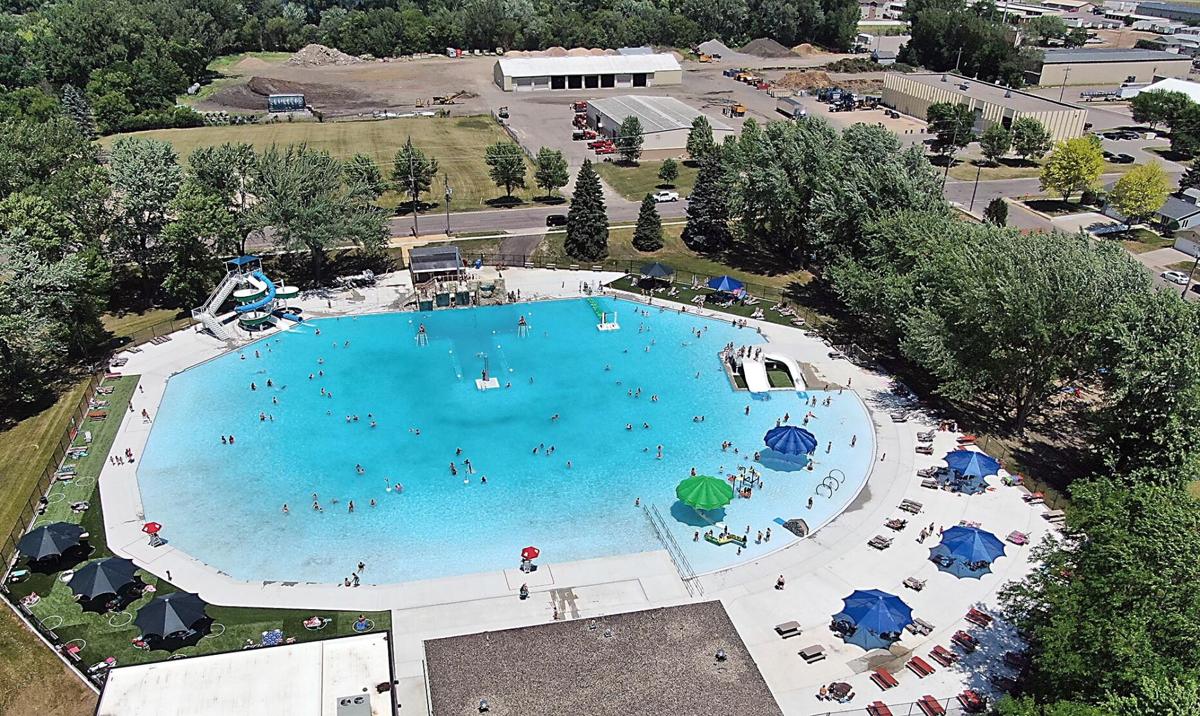 The new swim facility in Spring Lake Park is seen as a big draw to more residential development in the area, including possibly on the land now used for the North Mankato public works facilities, shown at top. 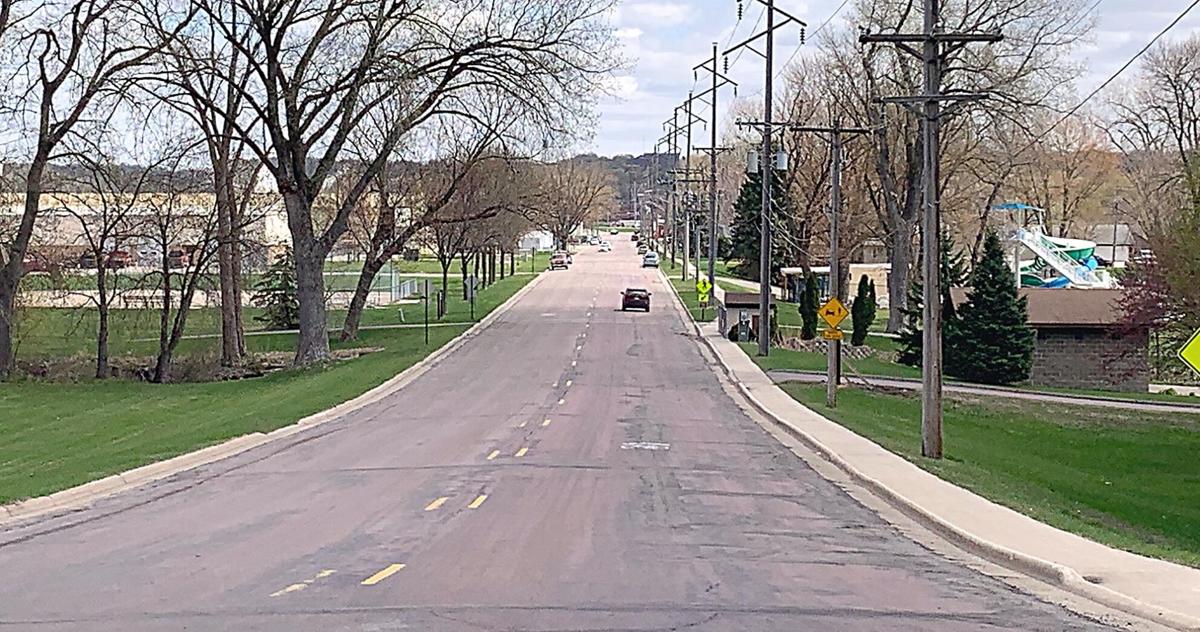 Webster Avenue in North Mankato, shown from Lake Street toward Highway 169, with the public works buildings and yard to the left and the Spring Lake pool to the right. The city is soon to approve a blueprint for developing the Webster Avenue area, including the possibility to using the public works site for multi-family residential development.

NORTH MANKATO — The area along Webster Avenue and Highway 169 doesn’t garner a lot of warm fuzzy feelings by many residents.

While it’s seen as an important area for business and industry, the area has plenty working against it.

“Mixed use, dirty, busy, industrial, run down, poorly lit” were some of the top terms people used to describe the area when the city sought input on a long-range plan for the area.

The City Council is finalizing a development blueprint for the area it hopes will improve vehicle and pedestrian traffic, make it more aesthetically appealing, support business and bring in more multi-family development.

“Webster is the next new frontier for a lot of development,” said City Administrator John Harrenstein. “It’s got a lot going for it with its Highway 169 access, the new pool, the Mankato Brewery and soon-to-be-renewed Norwood Inn. This plan just guides development in that area.”

One big change being considered is using the land that now occupies the public works garage and yard on Webster for residential development.

“That public works area could eventually be multi-family development, with the swim facility across the street,” said Councilman Jim Whitlock, one of two council members on the steering committee that helped create the draft Webster Avenue Area Plan.

The draft blueprint was approved by the Planning Commission and will go out for more public input with the council hoping to approve the plan in mid-May.

“We’ll take it out for some public comment, engagement sessions, most likely on Zoom, maybe in person,” Harrenstein said.

The city will post the planning document on the city website soon, along with information on ways the public can give input.

The planning area goes from just south of Webster Avenue to just north of Perkins and from Lake Street to across Highway 169 to the Minnesota River.

The vision includes better pedestrian routes along and across Webster Avenue to safely access areas including Spring Lake Park and swimming pool, Mankato Brewery and the Hiniker Pond area.

City planner Matthew Lassonde, who walked the council through the proposal last week, said that while there is a broad mix of uses in the area, residential development has some of the biggest potential moving forward.

“Housing is the strongest market in recent years with more focus on multi-family.”

He noted that with changes in the marketplace, a lot of new office and retail development is less likely.

The city also hopes to see the Norwood Inn renovated. The hotel, which the city cited as a deteriorated and troubled property, is for the next two years housing migrant workers from a pork-processing plant in Windom. Under an agreement, the city is effectively overseeing the property and will purchase it for renovation or redevelopment when it’s no longer used for worker housing.

The large vacant building nearby, which formerly housed Dutler Bowl and more recently an antique mall, is also a major piece of property eyed for development. Developers have been looking at razing the building, along with a neighboring car wash, and developing the prime piece of land along Highway 169.

One of the most complicated and challenging pieces to the area’s redevelopment is future highway, road and intersection changes, particularly the Webster/169 intersection. Considerable congestion and often backups occur at the intersection, as well as a relatively high number of accidents, including at Webster Avenue and Range Street.

The city has long taken the stand that the intersection of Webster and Highway 169 should remain at-grade and signalized, with the ability of motorists on both roads to be able to turn in all directions.

City officials’ position is that the intersection provides important, relatively easy access to a variety of businesses, including the Speedway gas station, businesses along Range Street and those along Webster Avenue.

But the city’s plan could run up against other plans now under consideration. The Minnesota Department of Transportation, with input from Mankato and North Mankato, is conducting a Highway 169 corridor study that would guide significant changes.

That plan is looking at a full interchange at 169 and Highway 14, near McDonalds. But it is also looking at possibly repositioning or closing intersections, including the one going into Kwik Trip and the Webster Avenue intersection.

Lassonde and Harrenstein say the uncertainty about what access will look like has deterred building owners and developers from investing in the Webster area.

While the North Mankato plan still favors leaving the Webster/169 intersection largely as it is, the city also has a variety of options to upgrade the intersection. They include adding lanes on Webster, Range and 169 and closing one entrance into Speedway to alleviate the backups that occur at the intersection.

Other grander plans envision a major roundabout or a full diamond intersection at Webster/169, something that would require the removal of some existing buildings.

The sizable piece of land used for the public works garage, as well as the recycling center and a compost site, is an obvious piece of prime land for development.

Sitting directly across the street from Spring Lake Park and the new swim facility, the property is near Highway 169, the brewery and Hiniker Pond.

Relocating the public works facilities and preparing the property for development for multi-family housing is likely to be a long process.

City officials say the methane is and can continue to be mitigated through venting and certain building designs.

They said the city will have to wait to see what mitigation plans will be needed as the Minnesota Pollution Control Agency is evaluating the site and looking at changes to its rules for such former dump sites.

Age 70, of Garden City, died 5-12-2021 in Mankato. Visitation celebrating her life will be held from 3-7pm Sunday, 5-30-2021 at the Wellcome Memorial Community Room in Garden City. Mankato Mortuary assisted with arrangements.

Dorothy Kapfer, 90, born in Jamestown, ND on January 20, 1931 and longtime resident of Eagle Lake, MN, died on May 15, 2021 in Mankato. Interment was held at Ft. Snelling National Cemetery, Minneapolis. www.mankatomortuary.com