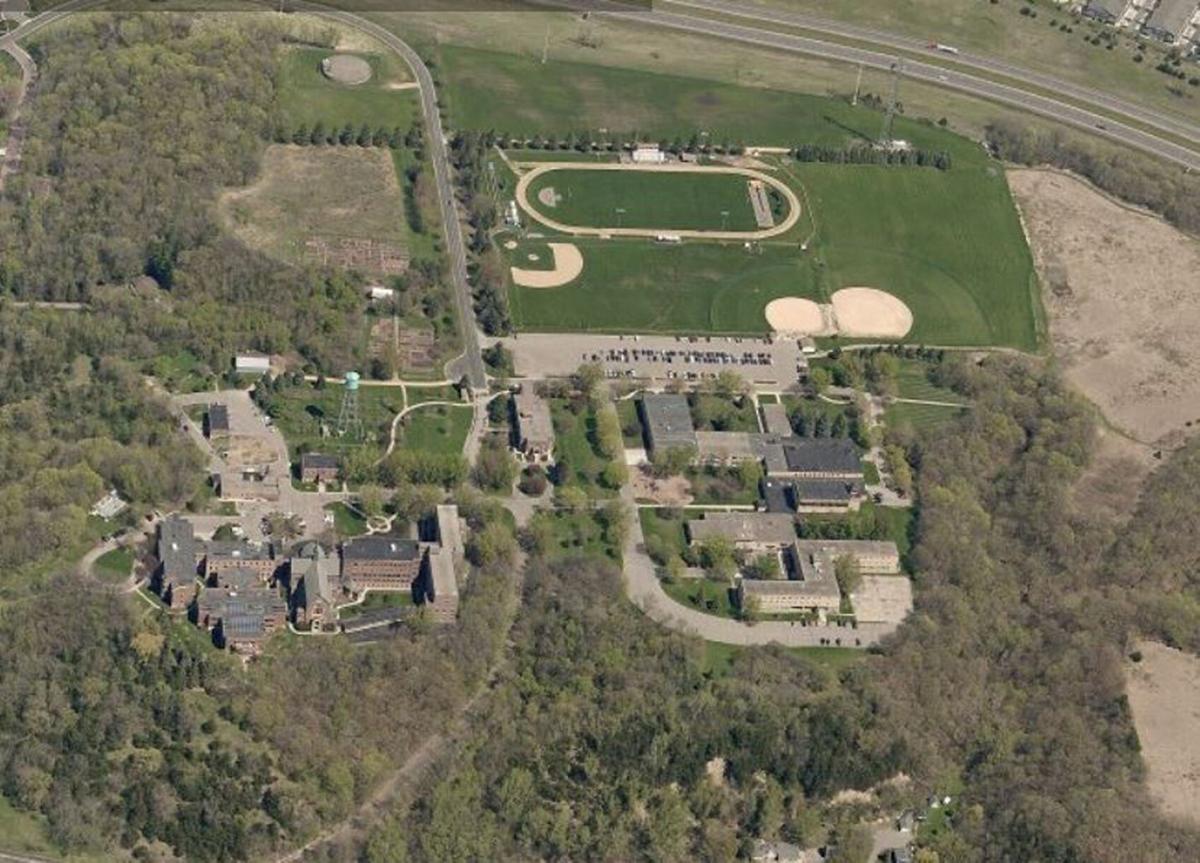 The Good Counsel campus covers more than 130 acres from the Tourtellotte Park neighborhood to Highway 14 to North Victory Drive. 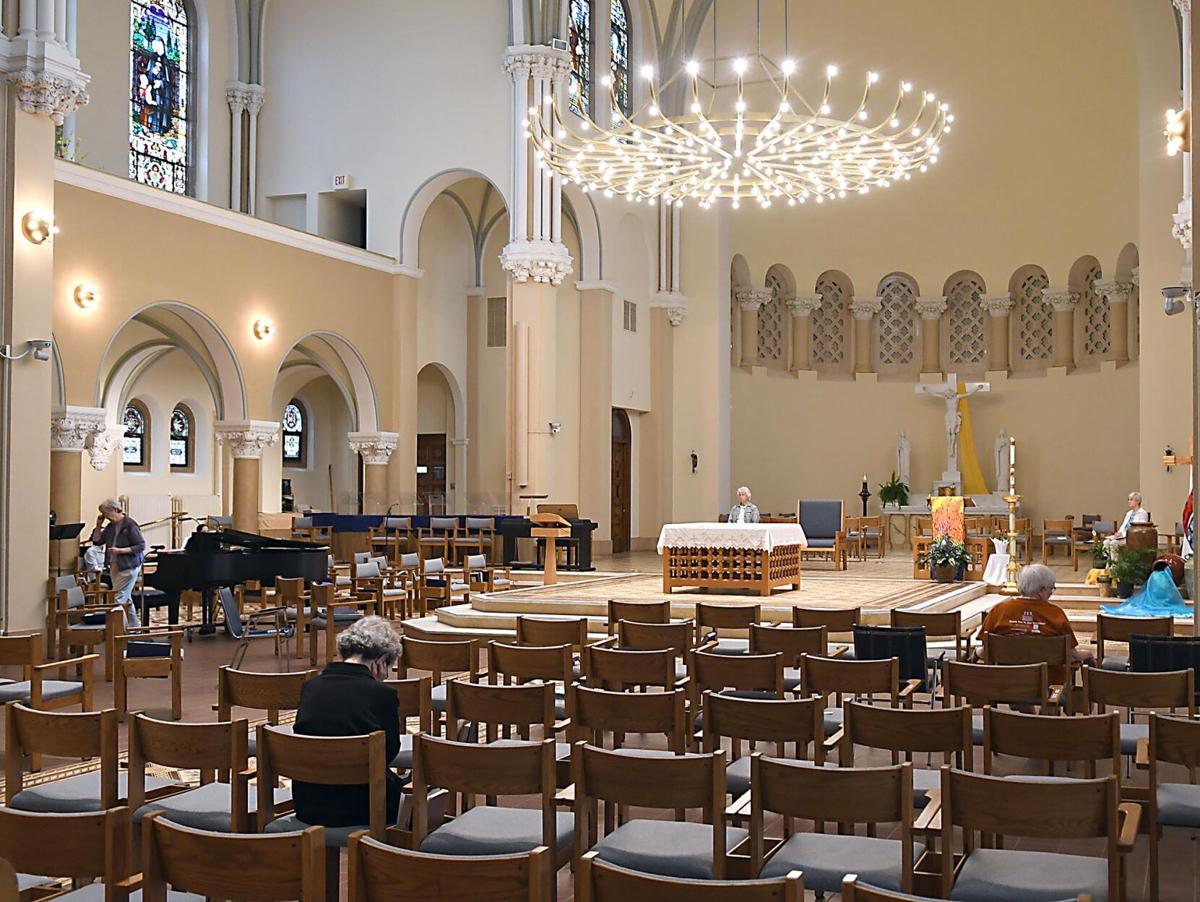 Even the chapel at Our Lady of Good Counsel is expected to be sold as the School Sisters of Notre Dame divest of their properties to reduce expenses and raise revenue. 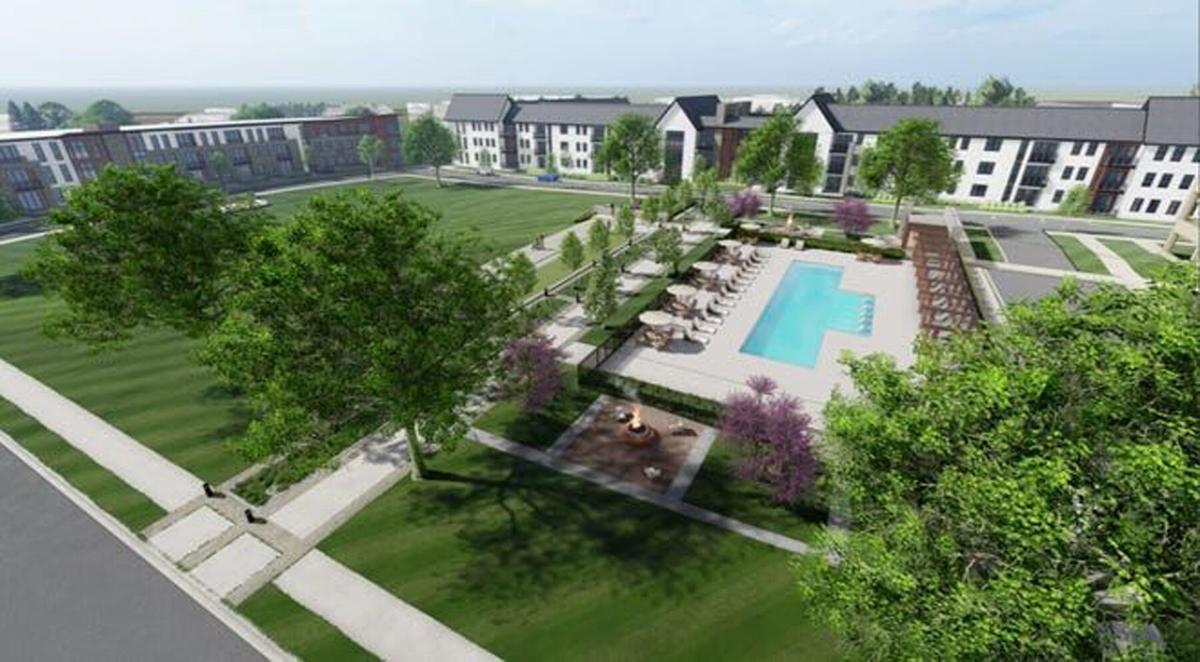 Luxury apartments complete with a pool and bocce ball court are components of one concept under consideration for of a Wisconsin SSND campus. 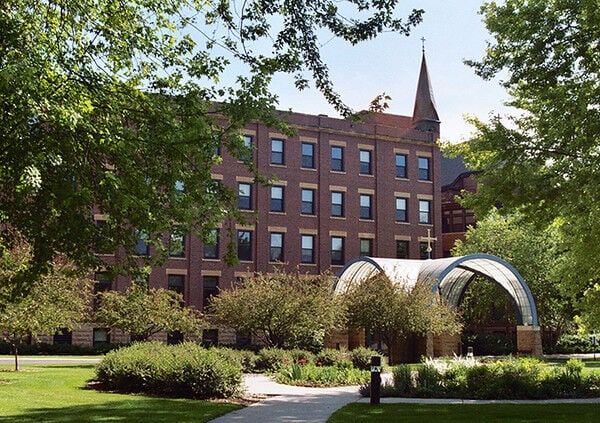 Other than Loyola Catholic School, all buildings and surrounding acreage at Mankato's Our Lady of Good Counsel are being prepared for sale to a yet-to-be-chosen buyer.

Plans for the redevelopment of a School Sisters of Notre Dame campus in Elm Grove, a community adjacent to Milwaukee, include hundreds of apartments, along with trails and green space. 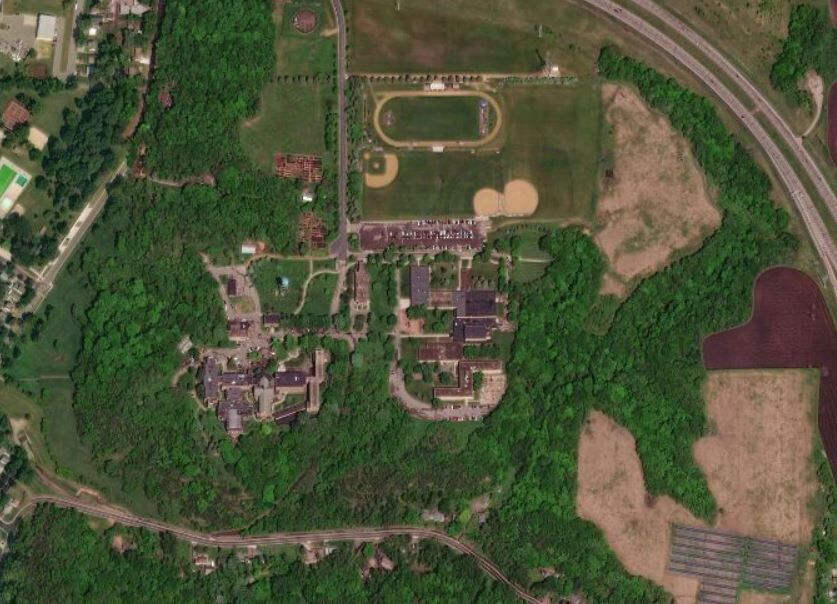 The School Sisters of Notre Dame are preparing to move their 144 mostly elderly nuns from the Good Counsel Hill and sell the sweeping and historic campus — a bedrock institution that has overlooked Mankato for more than a century — for redevelopment.

While Loyola Catholic School is expected to remain on the campus, the rest of the picturesque property is to be sold as the order of nuns works to rid itself of the burdens of property management and generate funds to provide ongoing health care and assisted living facilities for its aging members.

“We’re in dialogue with a number of interested parties, and we’re carefully vetting all options,” said Sister Joyce Kolbet. “Although there are many possibilities on the horizon, there’s been no agreement at this point.”

The nuns’ holdings on the Good Counsel Hill and below the hill in the Tourtellotte Park neighborhood cover more than 135 acres, according to Blue Earth County tax records. And the assessed value of the acreage and buildings exceeds $42 million.

While the campus is 109 years old, the School Sisters of Notre Dame have ties to the community reaching back to Mankato’s earliest days. The nuns first arrived in 1865 to teach the children of German immigrants in Catholic schools throughout the region.

Our Lady of Good Counsel was established in 1912, a regional base for the sisters and the home of Good Counsel Academy — a girls boarding school that operated until 1980. Loyola High School moved into the former academy. In subsequent years, students from the Catholic middle school, elementary schools and pre-schools in Mankato and North Mankato consolidated on the campus as well.

Even in recent decades, Good Counsel has been a community gathering place for concerts, the winter Solstice Celebration and arts/crafts shows featuring creations made by the nuns. The land and buildings have hosted environmental seminars and a community garden. And the nuns played host to the first large solar array in the city in 2015.

As area residents traveled up Good Counsel Drive for events, the nuns — even those well past retirement age — made their way into the community, volunteering at Mankato’s senior center, working at the local food shelf, tutoring school children, and participating in anti-war protests and social justice gatherings.

Their contributions have extended beyond their lifespans. Since the 1980s, hundreds of sisters have been participating in a long-term research study of Alzheimer’s disease, allowing their personal files going back decades to be examined, submitting to a battery of annual tests and, ultimately, donating their brains upon death.

It’s possible the nuns will be relocated within Mankato, but that’s not certain, according to a statement from Sister Debra Marie Sciano, the provincial leader of the SSND Central Pacific Province, which stretches across much of the western United States.

“The health and well-being of our sisters is of utmost importance to us, and we are still researching all opportunities for our health care and community needs, both within and out of Mankato,” Sciano said. “While it is our preference to remain in Mankato, that is unknown at this time.”

Kolbet said the emotional reaction among the Good Counsel nuns to the impending loss of their home is predictable.

“I’d say we are trying to follow in the footsteps of our founder, who challenged us ‘to trust and to dare,’” Kolbet said of Blessed Theresa Gerhardinger, a school teacher in Bavaria who later became a nun and created the congregation of the School Sisters of Notre Dame in 1833. “Those were her words — to trust and to dare.”

But Kolbet said a spiritual boost from the community would be welcomed by the sisters: “Please pray with us and for us. ... It’s important to us to have the prayers of the community.”

Divesting of all properties

The SSND Central Pacific Province has about 800 nuns, a large share of the 2,100 remaining School Sisters across 25 states and six foreign countries. In 1967 there were more than 7,000.

With the steep decline in numbers and the aging of the remaining members, provincial leaders decided in 2018 to sell the properties on its four campuses, both to reduce the costs of maintaining their holdings and to generate revenue to provide health care and housing for elderly nuns while also continuing their educational mission.

Along with Good Counsel, the province’s campuses are Notre Dame of Dallas in Texas; Notre Dame of Elm Grove near Milwaukee; and Sancta Maria in Ripa in St. Louis.

“In order to focus on our mission, ministry and the health care of our sisters and not be managers of property is the primary reason,” Kolbet said of the motivation for the sale. “Because, as you know, any ownership and management of property is a huge financial commitment.”

The process is further along at the Wisconsin campus, where SSND announced in December that the Elm Grove nuns would be moving by fall of 2021 to an intergenerational housing community at Mount Mary University, which is about a four-mile drive from their longtime home. Along with housing for the nuns, the project will create dormitory units where single mothers attending the university can live with their children.

The Mandel Group reached an agreement to buy the 30-acre SSND property, selected after a competitive request-for-proposals process that attracted multiple suitors. During the course of 2020, the Milwaukee-based developer outlined two possible plans for the property, both primarily featuring upscale apartments, ranging from one- to three-bedroom units.

Some of the campus buildings are to be razed, according to a story in the Milwaukee Journal Sentinel. One plan had 341 living units and each plan called for about 30 apartments in the historic Maria and Notre Dame halls at Elm Grove, which would be preserved. Mandel also said that 68% of the planned development would be green space, including restoration and enhancement of grasslands and woodlands and the addition of a series of trails.

Future of The Hill

Ever since the provincial decision to divest of all properties, a work group has been meeting monthly “with lots of work in between meetings” to prepare for the sale of the Good Counsel campus, Kolbet said. The group includes eight School Sisters, including three from the provincial leadership council, and seven lay members.

The decision to talk now to The Free Press is an indication the group is ready to seek community input, said Kolbet, a member of the Community Engagement Subcommittee.

“We want the community to know we’re not doing this alone,” she said. “Although we don’t have a lot of details to share at this point, it’s very important to us to share with the community that there will be changes.”

Even the timing isn’t clear for a final decision on the relocation of the nuns and a selection of a buyer of the property.

“I don’t think it will be this year, but I don’t know it as a fact,” Kolbet said. “Right now there are so many moving parts ... But we know it’s going to impact our sisters and the greater community.”

The School Sisters also employ 150 lay people, including part-timers, she said: “So that’s going to have an impact.”

The ultimate goal is a “repurposing of our buildings and properties in ways that are consistent with SSND values.” But the province has a strong incentive, as well, to maximize the revenue it gains from the sale of one of its most valuable assets. Kolbet was asked how the balance between those potentially competing objectives will be found.

“I would say through prayer, through dialogue and collaboration, and the very thing we’re trying to do through community engagement,” she said.

The Catholic school won’t be going anywhere, although Kolbet referred to Loyola officials a question of whether the organization will be expected to raise funds to purchase the school property.

“Loyola will remain on The Hill and we are in dialogue with them,” she said.

The communications coordinator for Loyola directed The Free Press to School Leader/Principal Adam Bemmels, who couldn’t be reached for comment Thursday.

It’s more than unusual for an expansive acreage in the middle of a 169-year-old city to become available for redevelopment, particularly one on a scenic hilltop overlooking the valley and wooded ravines, with residential and commercial areas nearby.

But the property has challenges, too. Almost any proposal would require city approval because the area is now zoned only for institutional uses.

“It is a large piece of property. A significant portion is hillside and environmentally sensitive areas,” said Mankato Community Development Director Paul Vogel. “You also have vacant land on top of the hill and below the hill.”

Below the hill, a meadow where cattle grazed until recent decades includes nearly six acres overlooking Tourtellotte Park and homes across North Fourth Street, creating the possibility of multiple new residential lots in a neighborhood that’s nearly a century old.

On the hilltop, developers would need to look at the viability of remodeling existing Good Counsel buildings into apartments or other uses, Vogel said. And proposals to add new residential units in those buildings or on vacant land would need to demonstrate that Good Counsel Drive could handle increased traffic.

As always when a new development or major redevelopment is being considered, Vogel recommends early and frequent conversations with nearby property owners and businesses.

In this case, Kolbet said SSND wants to hear not just from neighbors but from anyone in the community who has ideas and opinions to share. People are invited to send emails to listeningtoyou@ssndcp.org.

“Our hope and prayer is that what happens on The Hill in the future will continue to serve the community in a way that’s consistent with our 155-year history and our mission and our values,” Kolbet said.