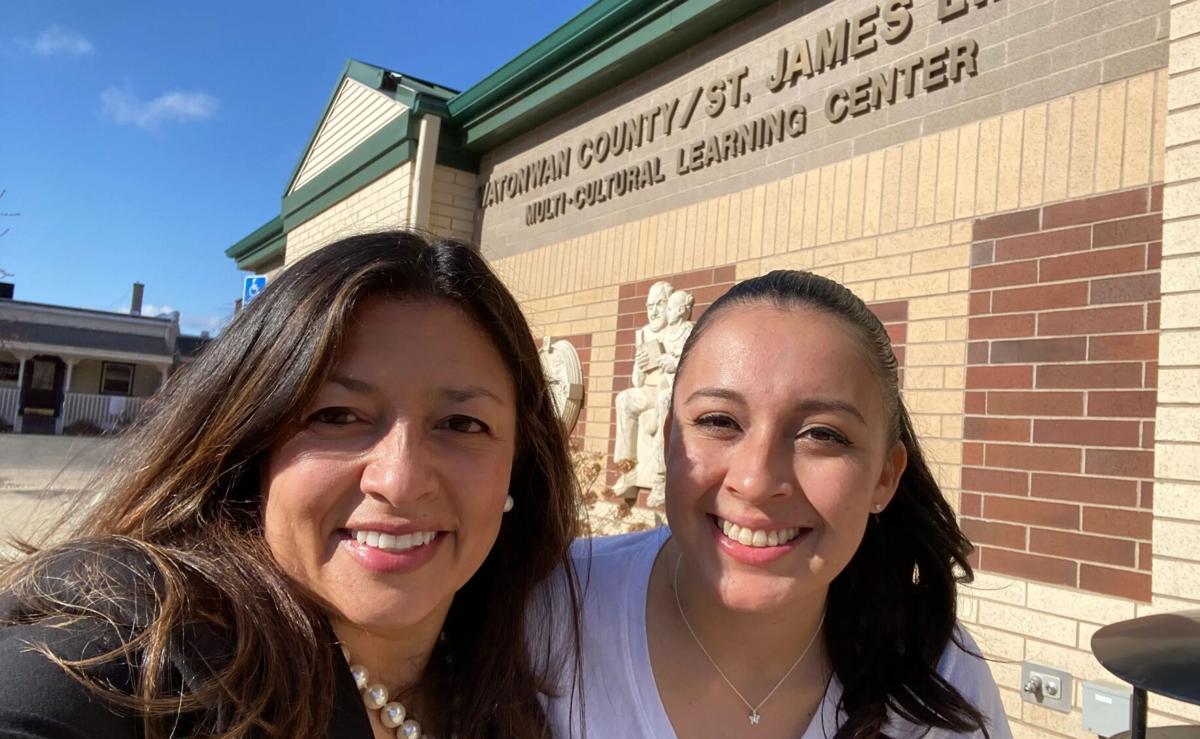 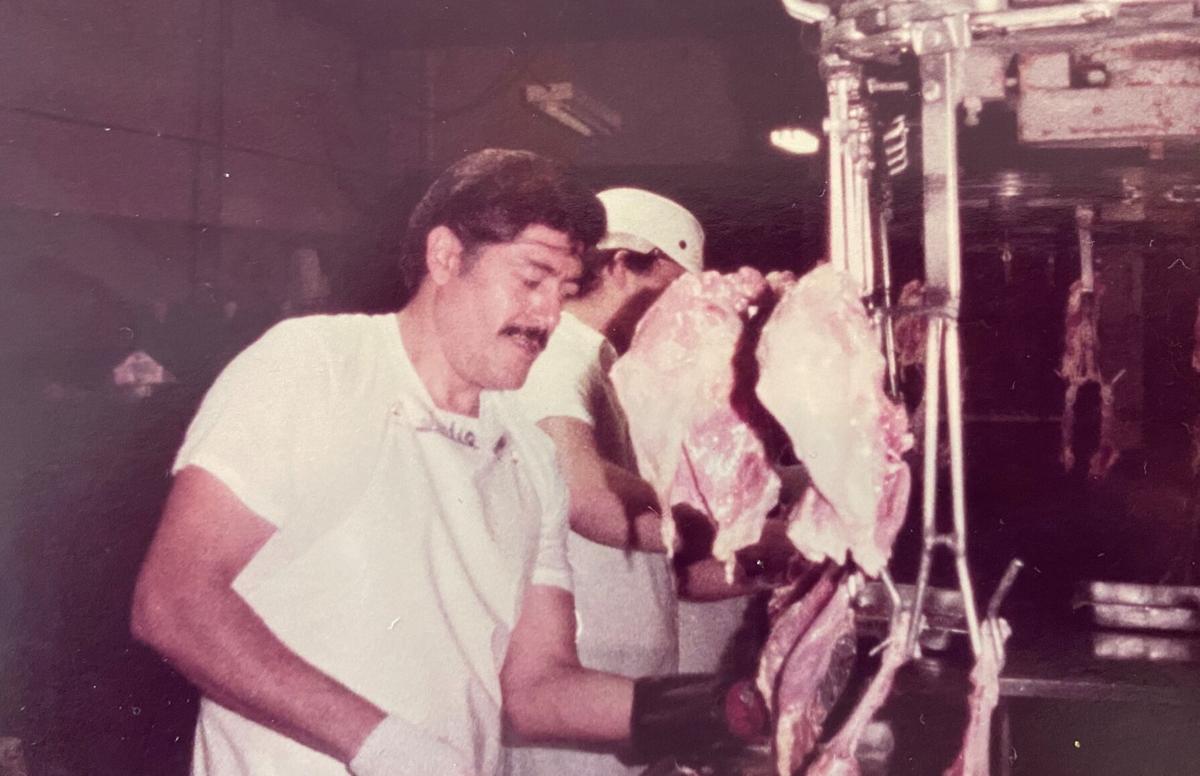 Juan Murvartian worked in a chicken processing plant after immigrating to New Ulm. 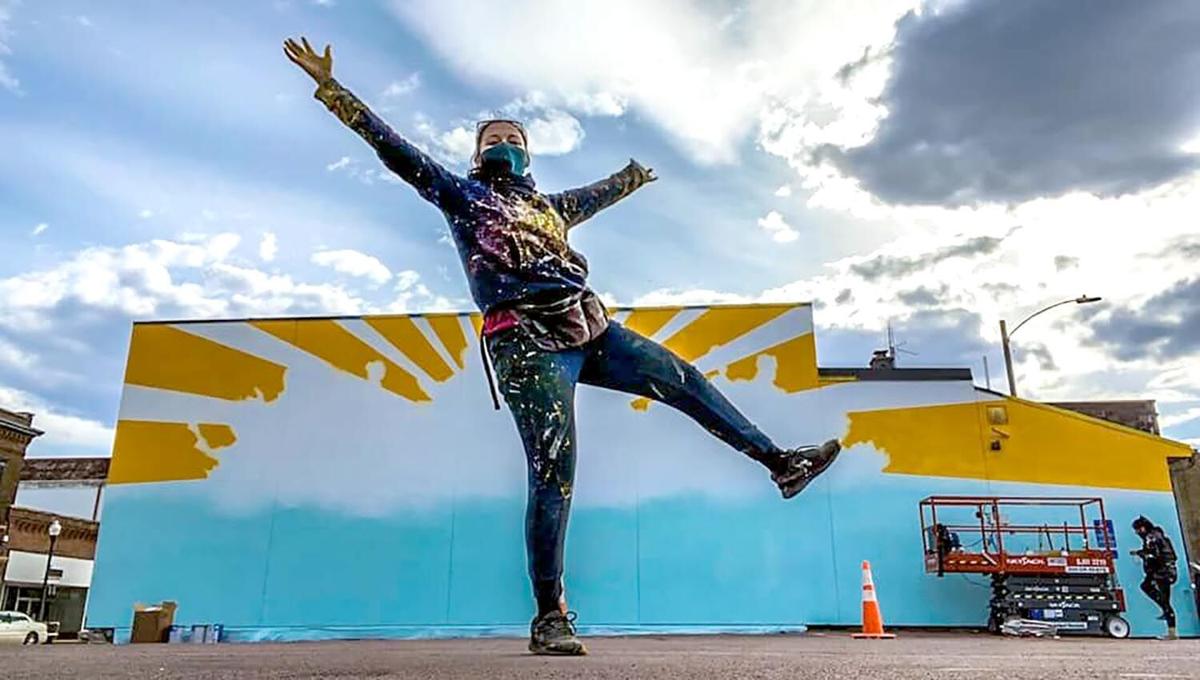 Yehimi Cambrón from Atlanta spent a month creating a mural on the side of a building in downtown St. James. 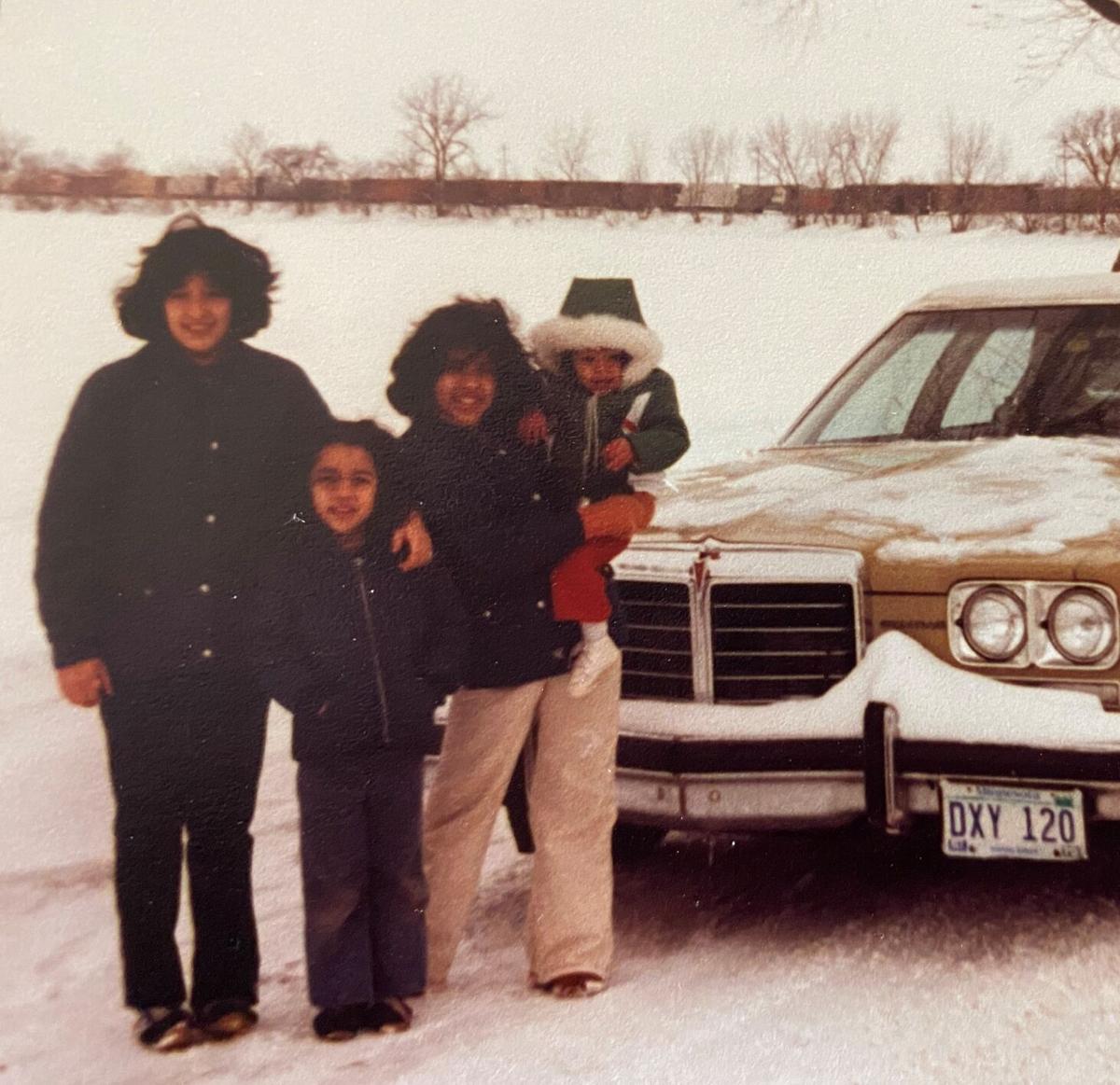 The Murvartian sisters, Susan, Claudia, Laura and Elizabeth in 1977 at St. James Lake. 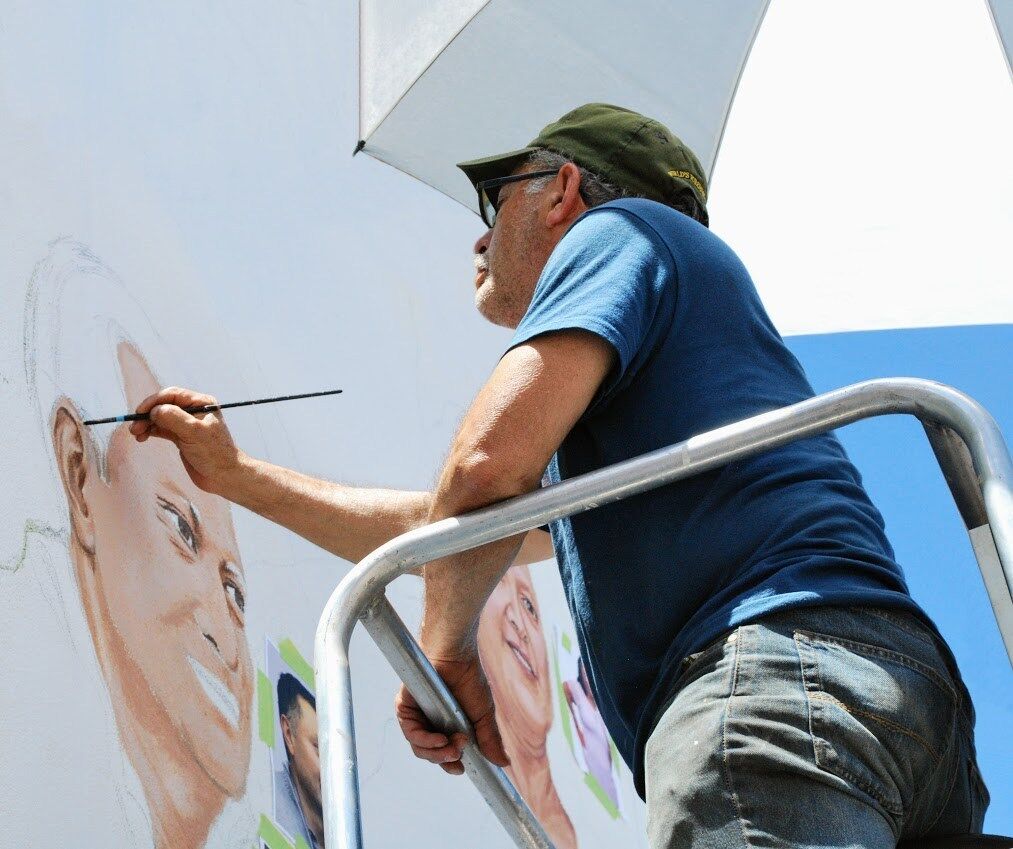 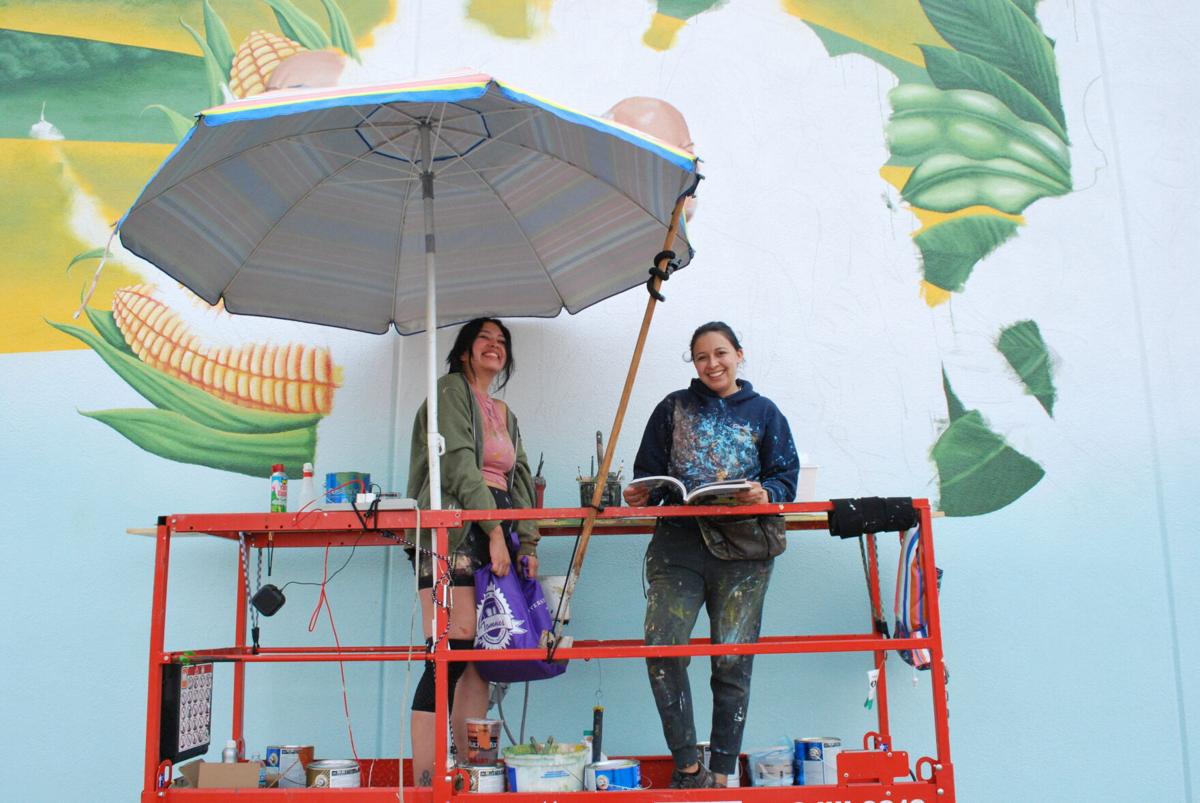 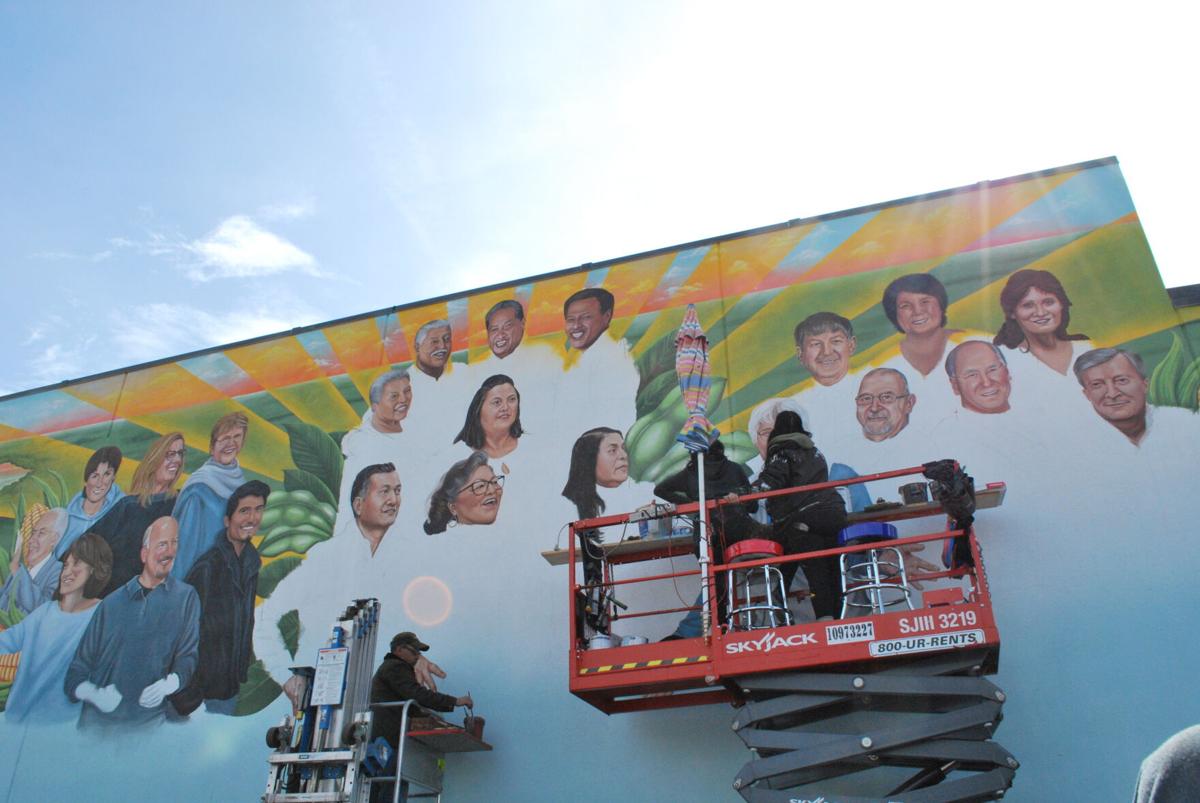 The “Comunidad: A Legacy from Generation to Generation” mural was completed in early June and will be dedicated on June 20.

Laura Murvartian spoke only a few words of English when she arrived in St. James.

She and her parents and sisters were one of the first Hispanic immigrant families in the small town in which over one-third of its residents are now Hispanic or Latino.

Now a successful business executive in Georgia, Murvartian is giving her adopted hometown a colorful thank you for its warm welcome 45 years ago.

The public is welcome to attend the mural dedication ceremony at 11 a.m. June 20 outside the Eyecare Center of St. James, 517 First Ave. S.

“Everyone welcomed us. Everyone helped us and supported us. It was really a Norman Rockwell experience,” she recalled of her childhood.

Murvartian and Yehimi Cambrón — a Hispanic artist from Atlanta — are now giving St. James its own sizable depiction of its special culture. A mural with dozens of portraits of community members past and present now adorns a highly visible wall in downtown St. James.

The mural will be dedicated next Sunday, a few days before Murvartian finally becomes a U.S. citizen.

“It was very hard work. It wasn’t pleasant. But my dad really liked the town,” Murvartian said.

The rest of the family joined him in St. James a year later in 1976. She was 8 years old. They all entered the country illegally.

There were some other Hispanic adults also working in the plants at that time. But Murvartian remembers only one other family with a child around her age.

“We lived in a trailer court. We were on food stamps,” she said. “But nobody made us feel bad about that. As an adult you realize, whoa, that was a really special community. That was a special time.”

In her teen years Murvartian worked jobs ranging from detasseling corn to serving food at the Home Town Cafe.

But she still found time to run on the school cross country team, be a cheerleader and participate in other school activities. When she and her sister could not afford the activity fees, school staff instead gave them jobs at school such as picking up trash from around the school grounds.

She and her older sister, Susan, were the first to enroll in St. James Elementary School who could not speak English.

Lucille Thares was the speech pathologist at the time and became the English teacher for the girls as well as their parents. Thares did not have any experience teaching a second language, but she said she did not hesitate to try her best to help. The girls were quick learners and respectful students, she said.

Thares volunteered to go the Murvartian home once a week to also instruct their parents, Juan and Socorro Murvartian. Her only compensation was a meal of authentic Mexican cuisine.

The tutoring sessions led to a lasting friendship between both families that has included attending quinceaneras, weddings and more.

“It was a real privilege to get to experience their culture,” Thares said.

Thares continued working as a speech pathologist into the 1990s but never again taught English. It was years before any other non-English speakers came to the district and then the district hired its first English language learner teacher, she recalled.

The Murvartian family moved to the Twin Cities when Laura was 17, and she went to another high school before going on to become the first in her family to earn college degrees (from Hamline University and later a master’s from the University of Michigan).

She now runs her own artist talent agency in Atlanta. She also is the founder of a children’s library and a leader in multiple nonprofits serving the Latino community in Atlanta.

The Immigration Reform and Control Act of 1986 allowed Murvartian and her family members to become legal residents of the United States. The law established penalties for employers of undocumented immigrants while at the same time granting amnesty to millions of immigrants who already were in the country.

After decades of having a green card, Murvartian is in the process of becoming a U.S. citizen. She will take her oath of allegiance on June 25.

The mural is not the first way Murvartian has given back to St. James, which she said she considers her hometown even though it was not where she was born or from where she graduated high school.

She also sponsors a scholarship in her parents’ names that gives $1,000 each year to a St. James senior from an immigrant family.

It was a young Mexican immigrant that inspired Murvartian to bring a mural to St. James. Murvartian is an admirer of Yehimi Cambrón’s work around Atlanta and commissioned her to come to St. James.

Murvartian initially suggested something simple like a “Welcome to St. James” message. But Cambrón, who specializes in portraiture, envisioned something more complex and personal.

The colorful faces include Juan and Socorro Murvartian, as well as Thares and other educators, the former owner of Home Town Cafe and a few others who helped Murvartian and her family in the 1970s and 1980s.

“I am so, so honored,” said Thares, who is coming back for the dedication ceremony after moving out of state.

Some of the figures are being honored posthumously and their relatives will be at the ceremony.

The other portraits are of current community members of diverse professions, heritages and ages. Many are engaged in activities like fishing, going to school or working in a meat processing plant.

Those depictions are meant to represent and celebrate the diversity of people and opportunities in St. James.

“It’s not about leaders or who has contributed the most,” Murvartian said. “Everyone in the community is important.”

The intermingling of figures from the past and present also has a significance.

“The message is the values of the community are passed down from generation to generation,” Murvartian said. “One generation makes the town better, and then the next generation takes over.”

The black and white portraits came from a wish to include as many people as possible, Murvartian said. A call for people to share or pose for photographs yielded more interest than they anticipated.

The interest continued after the painting got underway in May on a wall donated by the Eyecare Center of St. James.

It took Cambrón and her assistant artist a month to complete the mural instead of three weeks as planned because there were so many people stopping by to ask questions and share reaction to the mural. It was time well spent, Cambrón said.

The artist said she felt the same warm welcome that her sponsor did 45 years ago.

“Everyone was taking care of us,” she said. “The generosity and willingness to help with whatever we needed was amazing.”

“We feel like family now,” Cambrón said of many of the people she met, including local artists Jaime Olivares and Jorge Portillo, who volunteered several days helping with the mural.

Cambrón has volunteered to return to St. James to assist them with murals of their own someday.

Murvartian is working on a website with video interviews, photographs and other media about each of the people featured on the mural.

“It’s going to take me a while, but I want to tell each of their stories,” she said.