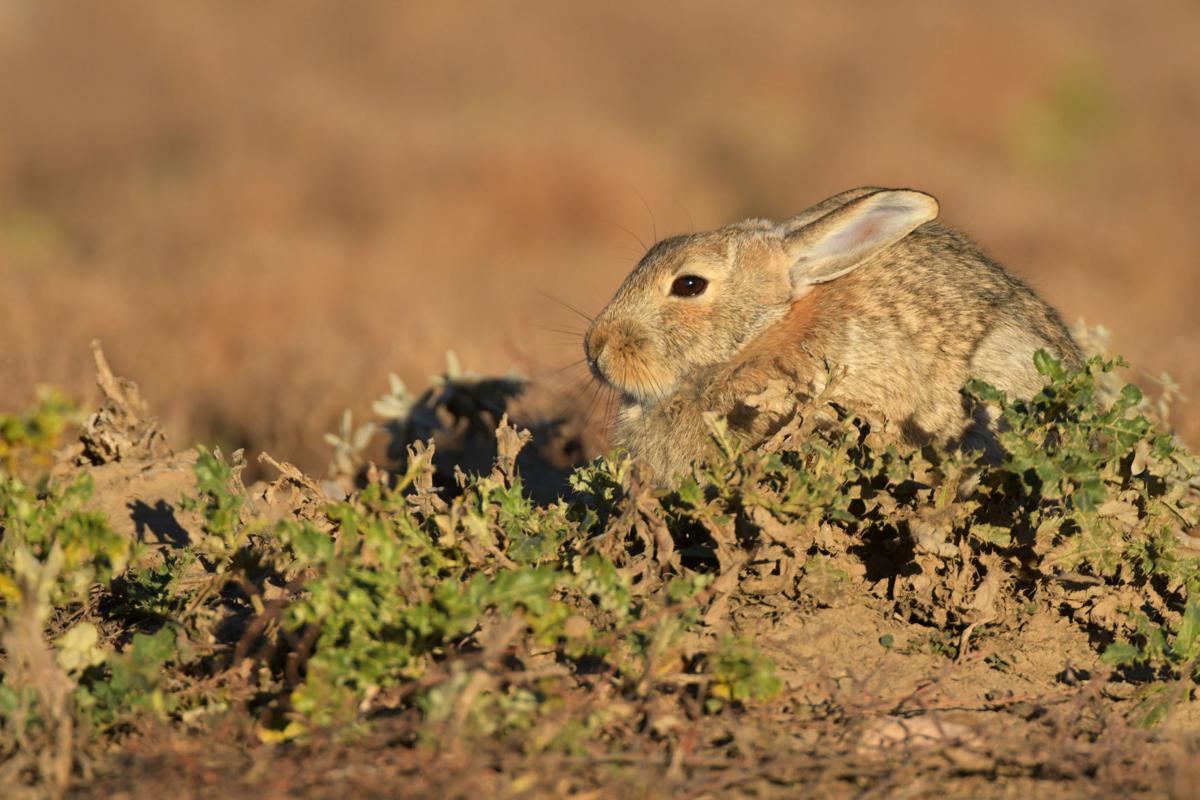 Cottontail rabbits will sometimes freeze to avoid detection from predators, giving sharp-eyed small-gamers an opportunity for a high-odds shot. 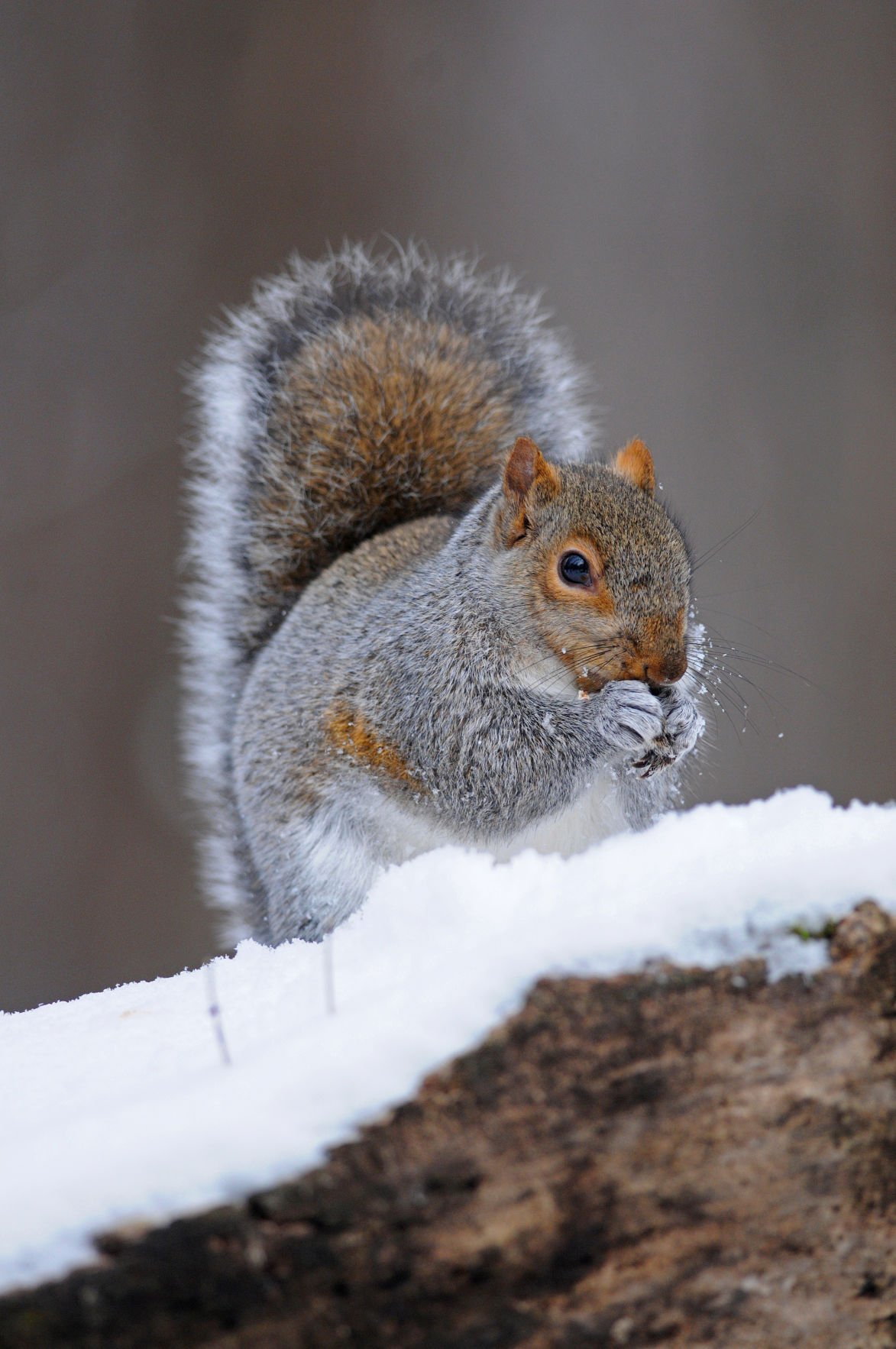 Eastern gray squirrels are plentiful all over southern Minnesota and make up the bulk of hunters’ bags each season.

Cottontail rabbits will sometimes freeze to avoid detection from predators, giving sharp-eyed small-gamers an opportunity for a high-odds shot.

Eastern gray squirrels are plentiful all over southern Minnesota and make up the bulk of hunters’ bags each season.

There are times when I pine for that closing date because, in those days, when archery gear was stowed, small-game equipment was put into action chasing squirrels and cottontail rabbits. Squirrel and rabbit season spans an even greater time than archery hunting. This season started Sept. 14 and continues until Feb. 29.

My main focus was hunting squirrels and rabbits with an accurate, peep-sighted, match grade Remington semi-automatic .22 caliber rifle. Less sure than a shotgun, the .22 was much quieter and added to the challenge as pinpoint shots were required to bring down diminutive tree dwelling prey and cottontails hiding in thick brush.

My usual hunting tactic was to sneak into squirrel laden oak woods in pre-dawn blackness and wait for the animals to emerge from tree dens to feed. When the forest floor was damp, I would forego sitting and carefully sneak through a woodlot, constantly scanning for squirrel and rabbit activity.

After harvesting a limit of squirrels, I would turn my sights on rabbits by plying overgrown field edges and carefully scanning brush pile dens. Many times a rabbit will freeze in that type of heavy cover, the only give away being its large, dark eyes.

While eastern gray squirrels make up the bulk of Minnesota’s squirrel harvest, extra-large fox squirrels are a favorite of most southern Minnesota farm country hunters. Fox squirrels prefer to inhabit woods directly adjacent to grain fields, most often corn fields where they can carry off whole ears of corn back to a tree for consumption. Not to be confused with much smaller red squirrels, these aptly named orange-red hued squirrels are much larger than grays, who by the way, aren’t always gray.

In the Mankato area, black phase gray squirrels are becoming more and more prevalent. Twenty years ago, seeing a black phase squirrel was rare. Now, the dark squirrels are commonplace. I’m sure this black coloration phase is cyclic and, perhaps, in another decade or two, they may not be as numerous. In other words, this may be the best time in many years for hunters looking to add a sleek black squirrel to their bags or trophy room.

Although, smaller and more numerous red squirrels abound across the state, eastern gray and fox squirrels are the most popular targets for small-gamers. Hunters can take seven grays or fox combined per day in Minnesota. There is no limit listed for red squirrels in the DNR handbook, which assumes that hunters know it’s an unprotected animal.

Even though reds are petite, many hunters, especially those hunting in northern Minnesota still harvest thousands per year. Some of these harvests may sprout from revenge, as these vociferous and bold squirrels won’t hesitate ruin hunter’s chances when they bark out their seemingly never ending, shrill alarm calls, many times mere feet from its hunter victim. Any hunter who has had to endure this incessant chattering while waiting in a deer stand has made plans to return and turn the little beasts into a meal.

Clearly, bravado like that isn’t a good defense against a hunter. Even when the hunter is carrying a longbow.

Many years ago, a pal and I paddled deep into the BWCA wilderness for a week of survivalist camping during a cool October week. Since we were staying in the national forest section and not the park area, we were free to hunt any game for which we had licenses.

High on our grocery list were red squirrels and spruce grouse. They were vitally important as we packed only a few staples, no meals, and would rely on our bow shooting to secure food. Calories gleaned from squirrels and grouse were welcome because we carried no tents or sleeping bags. Wool trapper blankets and pine bough lean-to’s provided our primitive shelters.

Our arrows carried blunt tips and large, so-called flu-flu fletching, which helps slow arrows for easier recovery after shooting at tree borne game. Despite not targeting glamorous species like deer, bear or moose, the hunt turned out to be one of the best I’ve been on. We feasted on pike taken from chilly river water, and the red squirrels were everywhere, providing us with a constant supply of squirrel stew.

The Red Stew, as we called it, was an excellent side when we were lucky to be cooking grouse over hot coals. Like Pavlov’s dog, after a few days of hunting, I would begin to salivate at any squirrel appearance.

Squirrel and rabbit hunting is becoming a lost art. It’s popularity has dwindled in favor of more flashy game animals, which may be good news for new small-gamers. While public hunting lands can sometimes get overrun by deer and pheasant hunters, many times squirrel and rabbit hunters will find themselves alone on these same properties. And, unlike other game, they’re usually plentiful.

Hunters need not go to survivalist extremes to secure a bag of squirrels or rabbits. All that’s needed is an inexpensive small game license, an accurate .22 rifle, a bit of patience and an appetite for small-game fun.