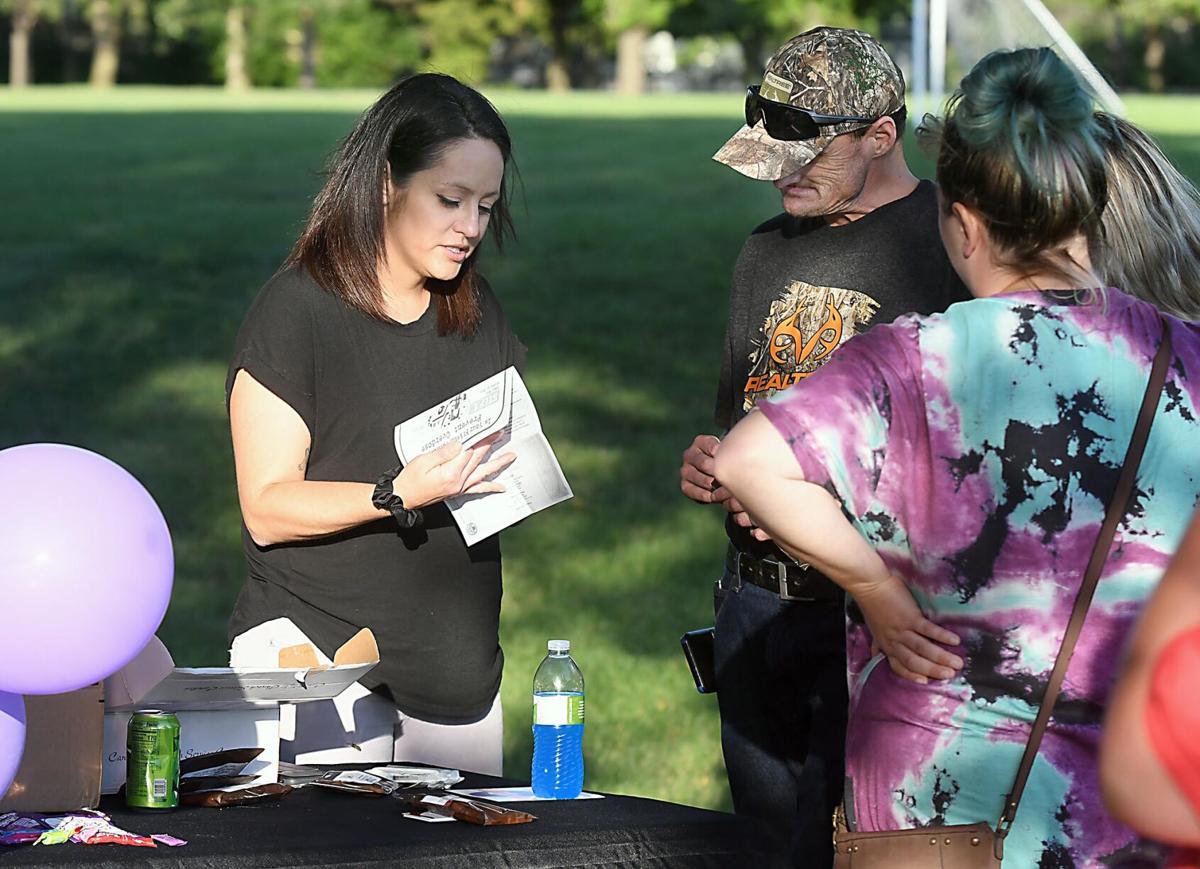 Brandy Brink of WEcovery offers information about the various resources in the Mankato area for people seeking recovery from addiction. 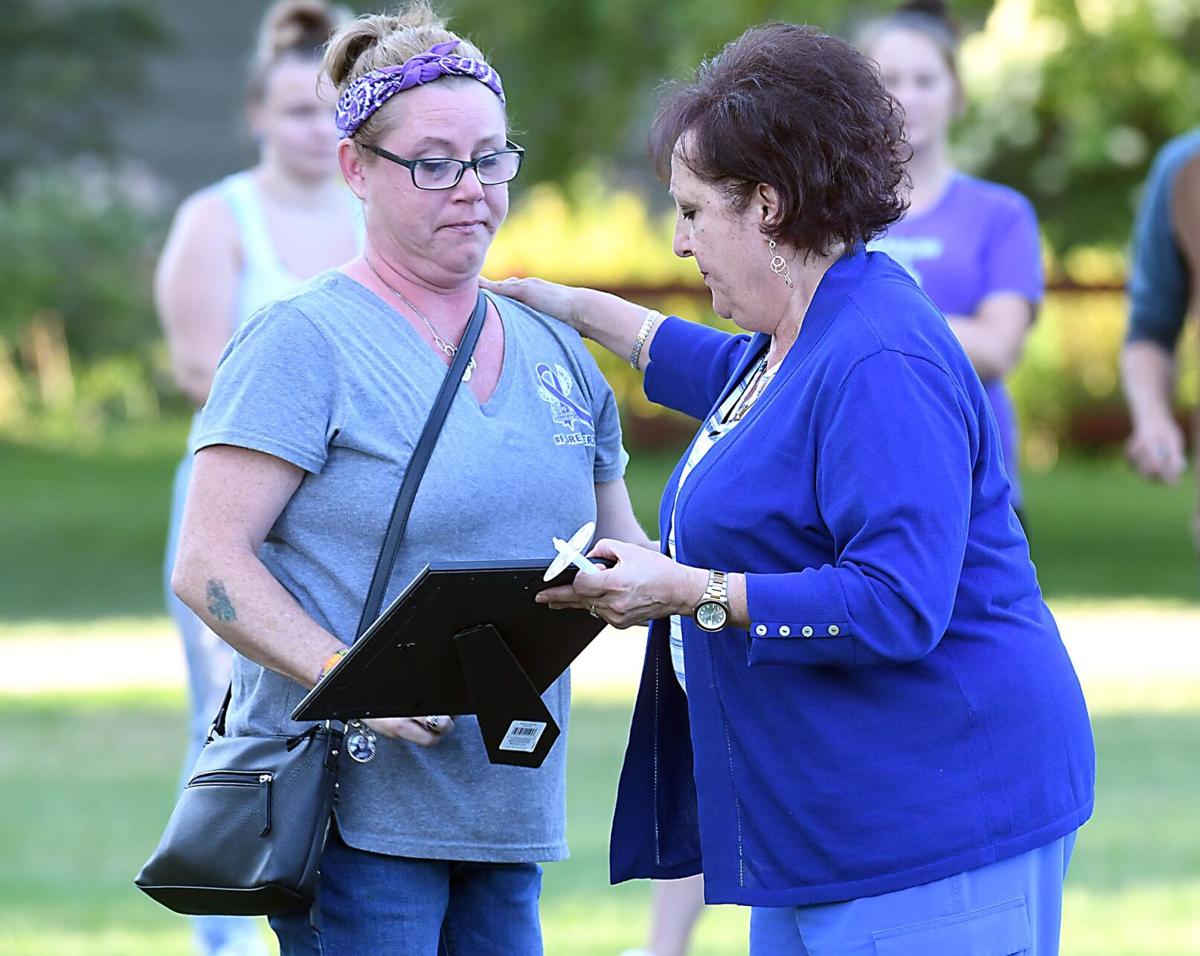 Brandy Brink of WEcovery offers information about the various resources in the Mankato area for people seeking recovery from addiction.

More than 80 people gathered in a Mankato park Tuesday night to solemnly — but not quietly — remember the overdose epidemic that killed a record 93,331 Americans and 1,008 Minnesotans in 2020 and is expected to take even more this year.

Too often in the past, even successful outcomes for people surviving addiction were lived privately. There was stigma, even shame, to addiction. Tuesday’s event was a remembrance for those who didn’t survive while also bringing together voices calling for a change in attitudes, policies and resources.

So for Richardson, a recovery advocate with the Blue Earth County Drug Court, it was heartening to be part of a crowd.

“I’m almost in tears because this means so much to me,” she said. “It’s good to see you.”

After Mayor Najwa Massad read a proclamation declaring that Mankato was joining communities across the nation and beyond in recognizing Overdose Awareness Day, Richardson walked along the circle and asked people to call out who they were there for. And they did: “My brother,” “My sister,” “My grandson,” “My father ... .”

The largest contingent was there for Travis Gustavson, who died in February in Mankato after taking a drug he didn’t know was laced with fentanyl, the extraordinarily potent opioid that’s a major factor in the soaring number of overdoses.

Gustavson’s family joined with Next Step Recovery and WEcovery in organizing the local event.

Grandmother Nancy Sack said it’s imperative that unified action be taken on behalf of those struggling with addiction.

Seeing Tuesday night’s growing crowd, Travis’ mother, Kim Sack, was hopeful: “I feel blessed. I feel thankful. The awareness, that people are coming, that they’re here to support us.”

Kim Sack knew about her son’s addiction and attempted to warn him about the dangerous substances being laced into drugs. But he was 21.

“He was a machine, he told me, in one of our last conversations,” she said. “I told him, ‘machines break.’”

So she wants young people to be better educated about the extent of the risk, comparing drug use today to playing Russian roulette where only one cylinder is without a cartridge. She wants people to recognize that addicts don’t want to be addicted any more than someone with cancer wants that affliction. And to southern Minnesotans who haven’t personally known someone who died from an overdose, Kim Sack asks them to step up before they do. She paraphrased the words of Travis’ oldest brother, Matthew.

Along with memories and calls to action, Tuesday night brought offers of the overdose reversal drug Narcan and information about resources like Next Step and WEcovery.

“Addiction has been an ‘over there’ problem, but we can’t do that anymore,” said Brandy Brink, the founder of WEcovery, running through the various places where help is available. “There’s so many, but when you don’t know, you don’t know.”

Which was why Brink, too, was encouraging recovering addicts to “be loud.”

“Historically, we’ve lived anonymously,” Brink said, conceding that was the initial approach she took in her own recovery. “When we’re silent, others don’t know where to go for help. ... I want people to have hope. I’m really hoping we reduce stigma by being out-loud.”

When Richardson had gone around nearly the full circle, hearing the wide range of overdose losses, she reached Travis Gustavuson’s family. They shouted: “We’re here for Travis.” They weren’t even close to being in sync, but Nancy Sack was pretty sure the volume was more than sufficient.