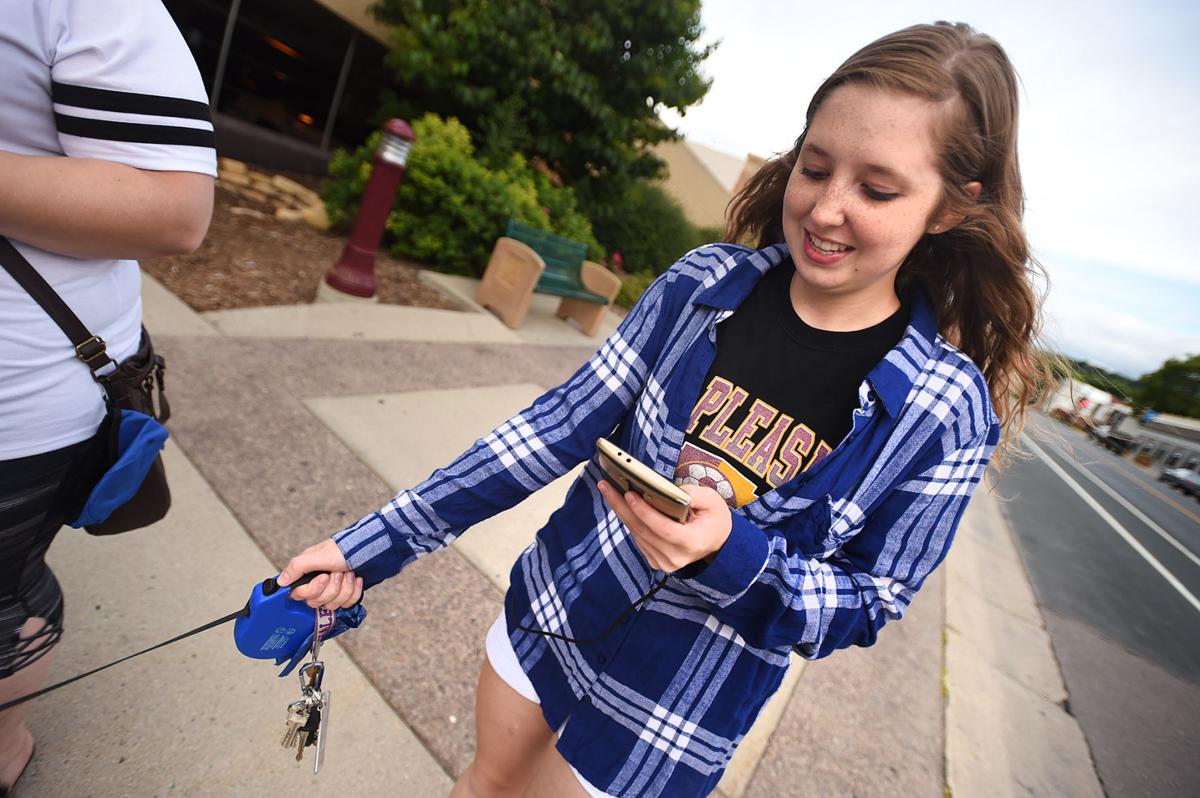 Hailey Van Zile, 19, uses a smartphone battery pack to extend the life of her cellphone while playing Pokemon Go in downtown Mankato. Photo by Bre McGee 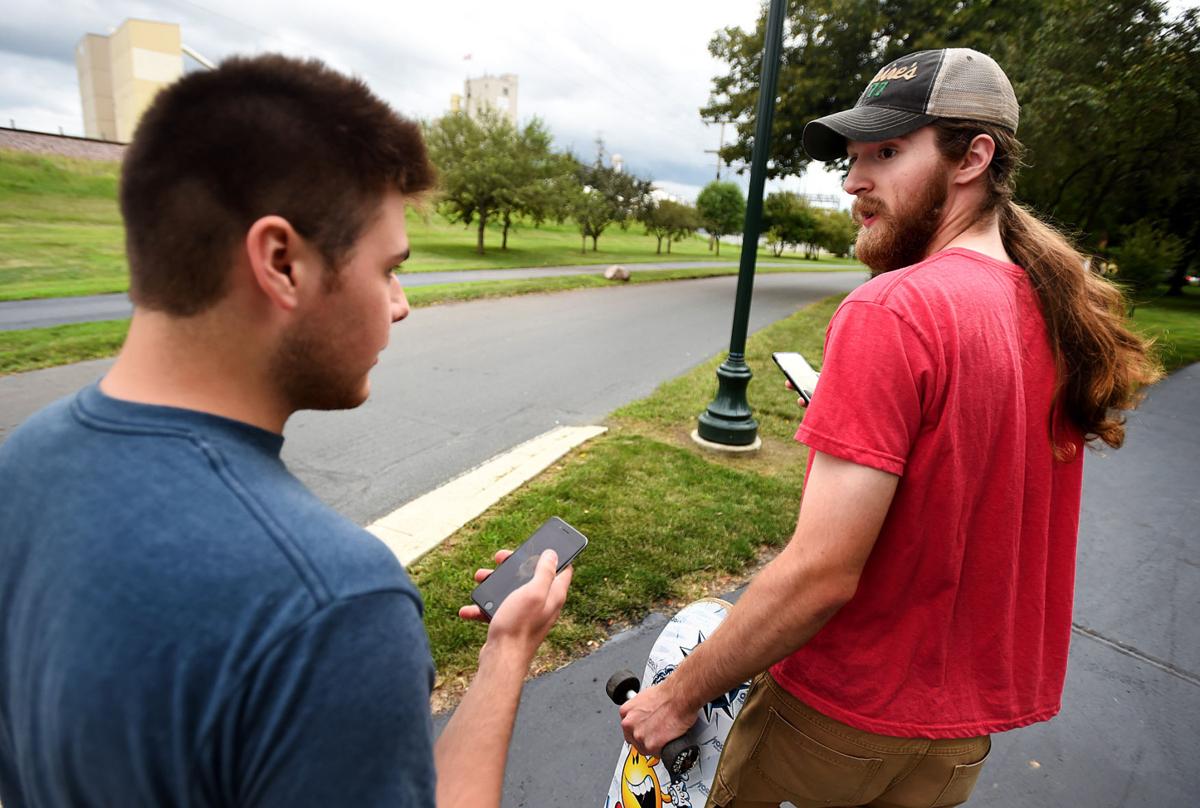 Jesse Baker, 22 (left), of Mankato, alerts his friend, Dan Buege, 21, of North Mankato, to a Pokemon character ahead of their path in Sibley Park. Photo by Bre McGee 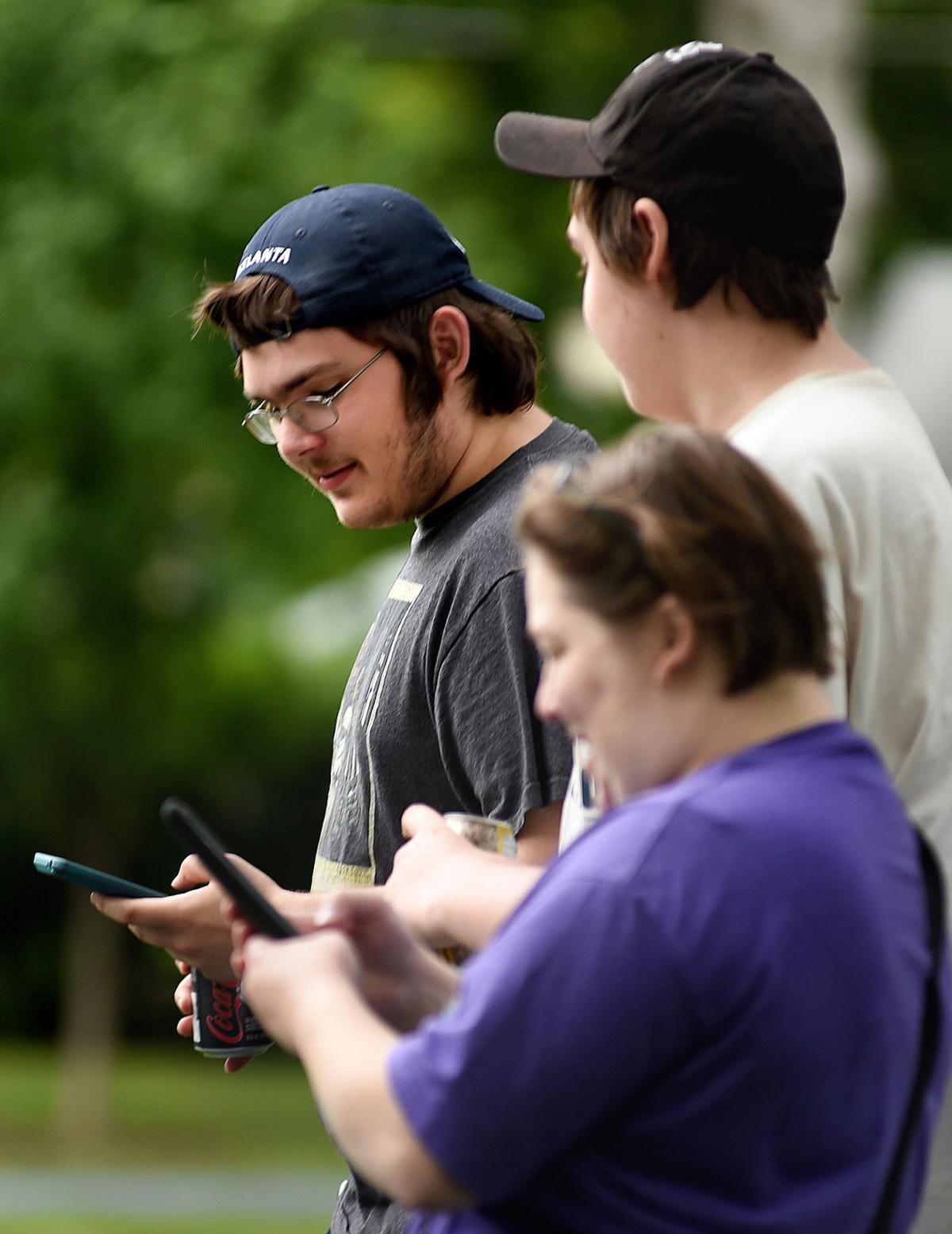 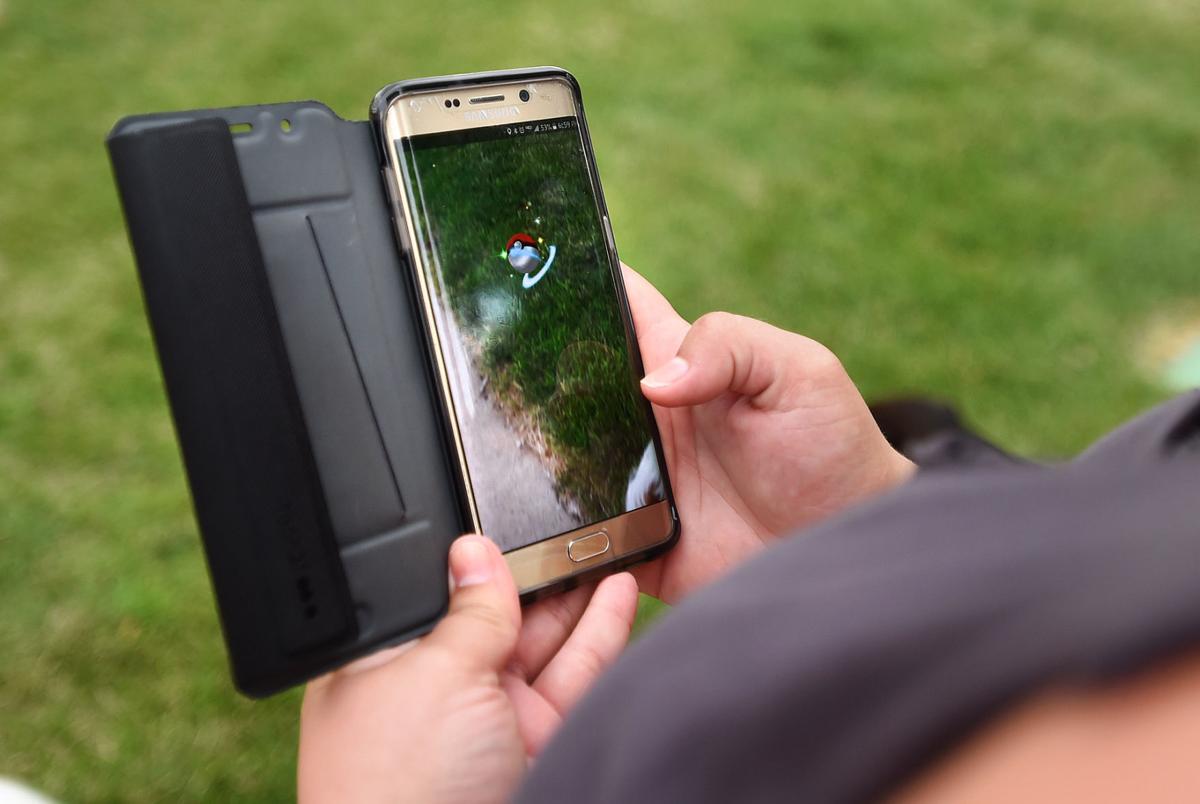 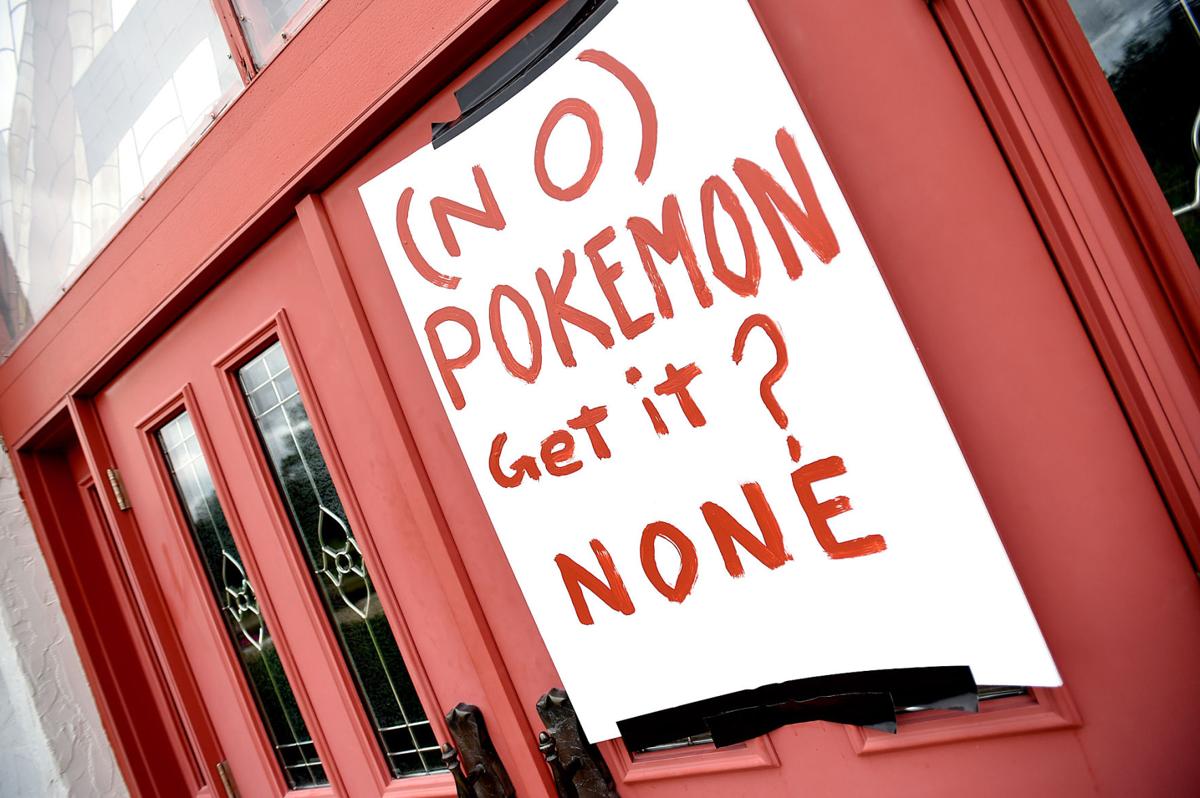 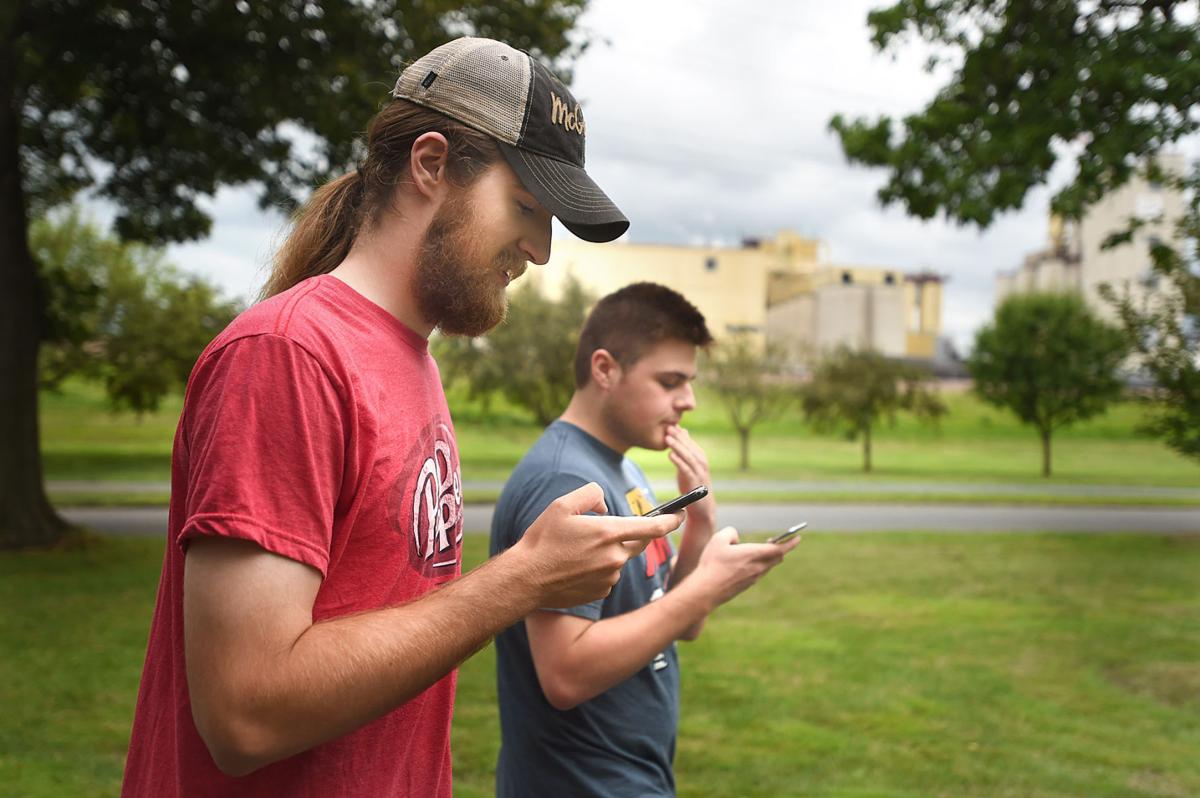 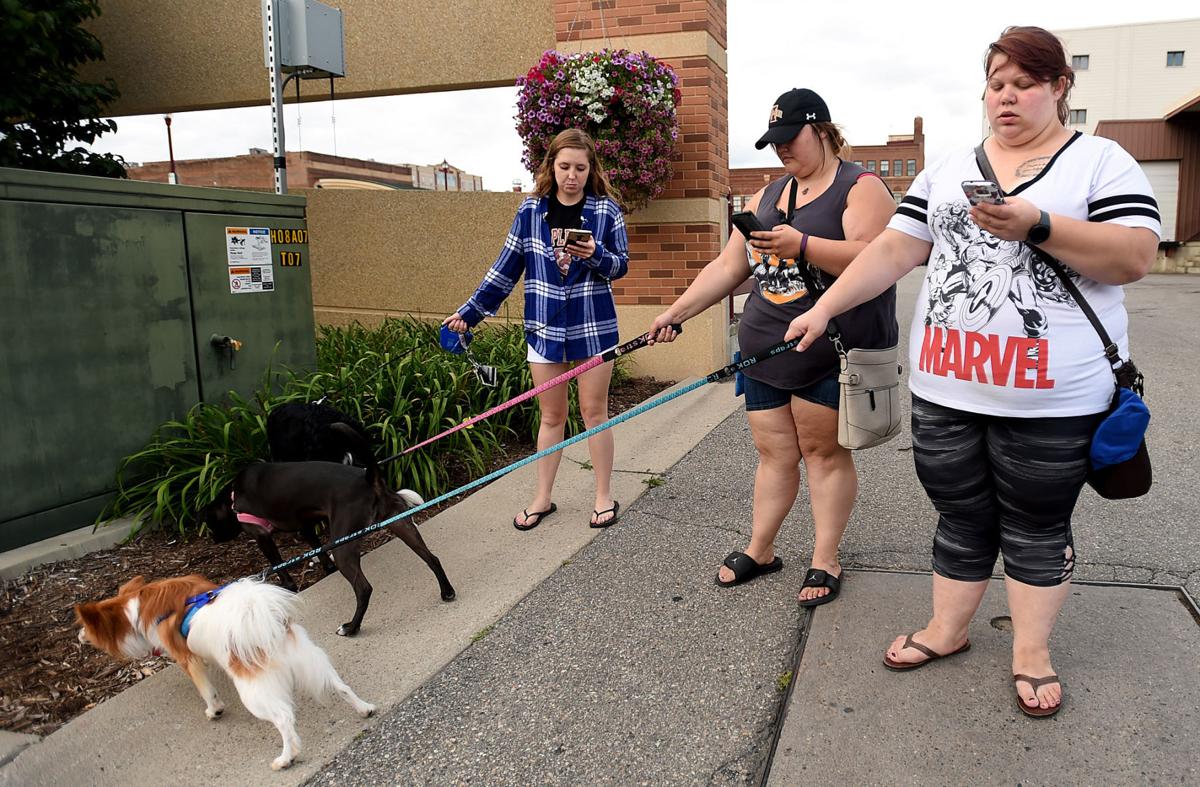 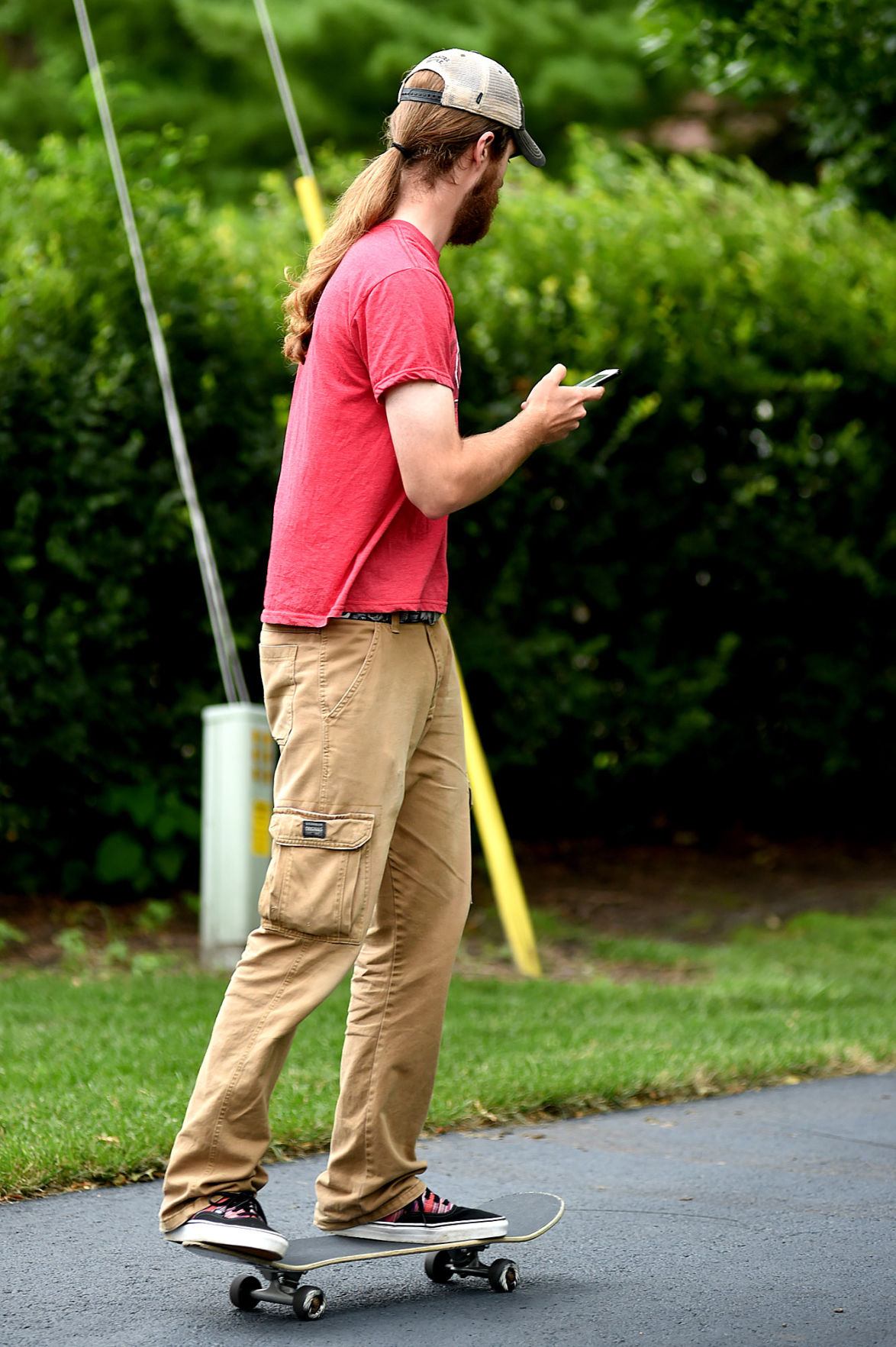 Hailey Van Zile, 19, uses a smartphone battery pack to extend the life of her cellphone while playing Pokemon Go in downtown Mankato. Photo by Bre McGee

Jesse Baker, 22 (left), of Mankato, alerts his friend, Dan Buege, 21, of North Mankato, to a Pokemon character ahead of their path in Sibley Park. Photo by Bre McGee

The Eagle Lake woman thought her son was a bit crazy when he went out in the middle of the night to play Pokemon Go minutes after the mobile app launched July 6.

A few days later her daughter invited her to join her on the augmented reality scavenger hunt. Hoeppner wasn't especially interested in the game but wasn't about to turn down a rare opportunity to spend some quality time with her busy daughter.

“When your 20-old daughter wants to do something with you, you do it,” she said.

The mother of three is now hooked on the game, playing every day since, even without her daughter.

It's a healthy addiction, she joked, because it has enticed her to get more exercise.

“It gets me out walking every day,” she said during a jaunt through Sibley Park.

She was among dozens of park-goers with their eyes glued to their cellphones who appeared to be playing the mobile game that afternoon.

The park is one of several area hotspots where swarms of gamers are converging to play a novel game that is getting them off the couch and interacting in person.

Pokemon Go is mobile-only version of the Nintendo franchise that launched in the mid-1990s.

The app uses smartphones' GPS trackers and cameras. Players search for digital monsters known as Pokemon as well as tools to help them catch Pokemon. On players' smartphone screens, the Pokemon appear on the real-world backgrounds captured by the phone's camera. The ultimate objective is to catch as many varieties of Pokemon (short for pocket monsters) as one can.

There are Pokestops in which players can acquire Pokeballs needed to capture Pokemon and “gyms” where players can do virtual battle with their Pokemon. The app is free but players can buy help such as “lures” to attract Pokemon to their location.

As of mid-week, 21 million people were playing Pokemon Go each day, making it the most-played mobile game in U.S. history.

Collin Gabler, manager of the We Got Game store on Riverfront Drive, said he knew Pokemon Go would be popular but is surprised how popular.

The furor has been good for business, the video game store manager said. Sales have skyrocketed as high as double projections, Gabler said. The store sold out of almost all of its classic Pokemon games to customers who can't get enough of the pocket monsters.

On Thursday he set up a station of phone chargers and on Facebook invited followers to stop in and recharge while they play some classic Pokemon on the store's gaming system.

Gabler refrains from playing while at work but still has invested some of his own funds on Pokemon lures at the store hoping to lure Pokemon hunters who might make a purchase as long as they're there.

Game retailers aren't the only businesses embracing the craze as an opportunity to bring in customers. Gabler and several players at Sibley Park said they'd heard of other businesses purchasing lures.

New Bohemia restaurant has beer specials for players; a different kind of beer is offered depending on which Pokemon alliance the customer is a member of.

Even a church is getting in on the action. Messiah Lutheran Church in North Mankato is the site of two Pokestops. The church is providing water for hunters and hosted two lure events this week.

What is it that makes the game so alluring? It's a combination of nostalgia and a reason to get out and meet new people, several Pokemon players at Sibley Park said.

“This game's just awesome. It gets everyone out of the house,” said Will Valdez, moments after catching a rare Pokemon called Dragonite.

“Otherwise we would be inside playing on our computer,” added Patrick Martin.

The friends played Pokemon games in their youth and were out hunting with Valdez's two younger brothers.

Ben Hahn of Mankato said he had made acquaintance with neighbors in his apartment building because of the game.

“It's a segue to meet people. You automatically have a reason to walk up to people and talk to them,” he said.

Local social media pages promptly were created on which players are sharing creature sightings and other game tips and arranging player gatherings.

The “Mankato Area Pokemon Go” Facebook group has more than 500 members. Its resources for players include a map of Pokestops and known Pokemon hangouts.

One post on the site inquired if anyone knew of Pokestops with free Wi-Fi access. The group member stated he had reached his phone plan's data limit and “I might actually die if I don't figure out a way to keep up.”

In addition to exhausting cellphone data allowances and batteries, the Pokemon phenomenon has had a few more drawbacks.

Many security experts initially raised digital privacy concern over the amount of personal information to which many players were grant access to the game's developer. Players with iPhones and Google accounts were agreeing to give the game access to their email, Internet search history and more.

U.S. Sen. Al Franken, a member of the Senate Privacy and Technology Subcommittee, called upon the developer, Niantic, to tell the public what user data it is collecting and how it intended to use the data.

“I am concerned about the extent to which Niantic may be unnecessarily collecting, using, and sharing a wide range of users’ personal information without their appropriate consent,” the Minnesota senator wrote in an open letter to Niantic's CEO.

Niantic scaled back its user agreement requirements and issued a statement that it wasn't collecting any information beyond user's email addresses.

While the game detects users' travel speed and has deterrents for playing while driving, there have nevertheless been a few reports nationally of vehicle crashes involving Pokemon Go players. There are also reports of players on foot walking into traffic and being injured because they didn't see a hazard.

None of the Sibley Park players had heard of any local mishaps worse than stepping into a puddle.

There have also been many reports of players trespassing on private property and playing in arguably inappropriate places. Officials at the Holocaust Museum and Arlington National Cemetery have issued statements requesting Pokemon Go players stay away.

Mayo Clinic Health System is filing a request that its facilities be removed from the game, said spokesman Kevin Burns. The concern is the use of phone cameras during the game can violate patient confidentiality, Burns said.

At the Mayo Clinic Health System in Mankato Emergency Department earlier in the week, a visitor who was accompanying a patient was asked to stop playing the game.