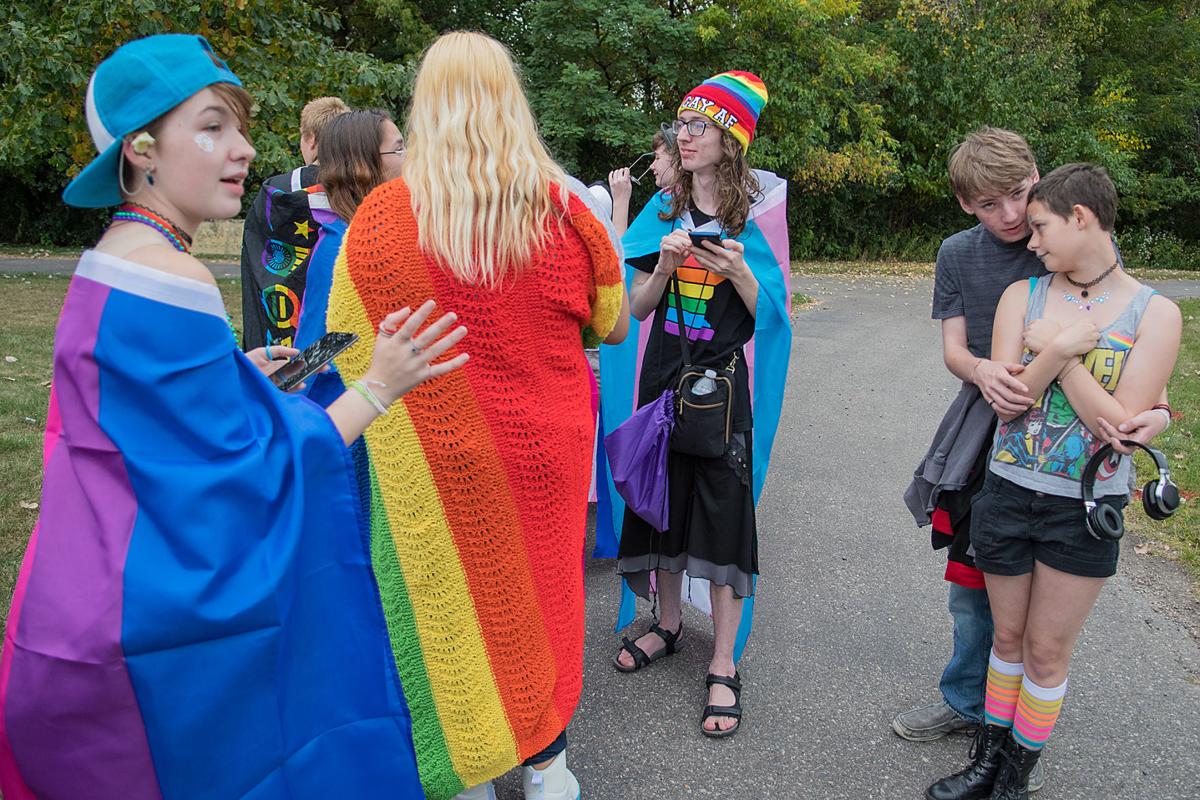 Tuyen Pitts (second from right) and Lexi Hutchins (right) hang out with friends in Riverfront Park as an impromptu group of teens gathered in the park and shared social media with one another. The teens who wore different flags to represent their different sexual or gender identities and came from New Prague, Eagle Lake, Mankato and St. Peter. 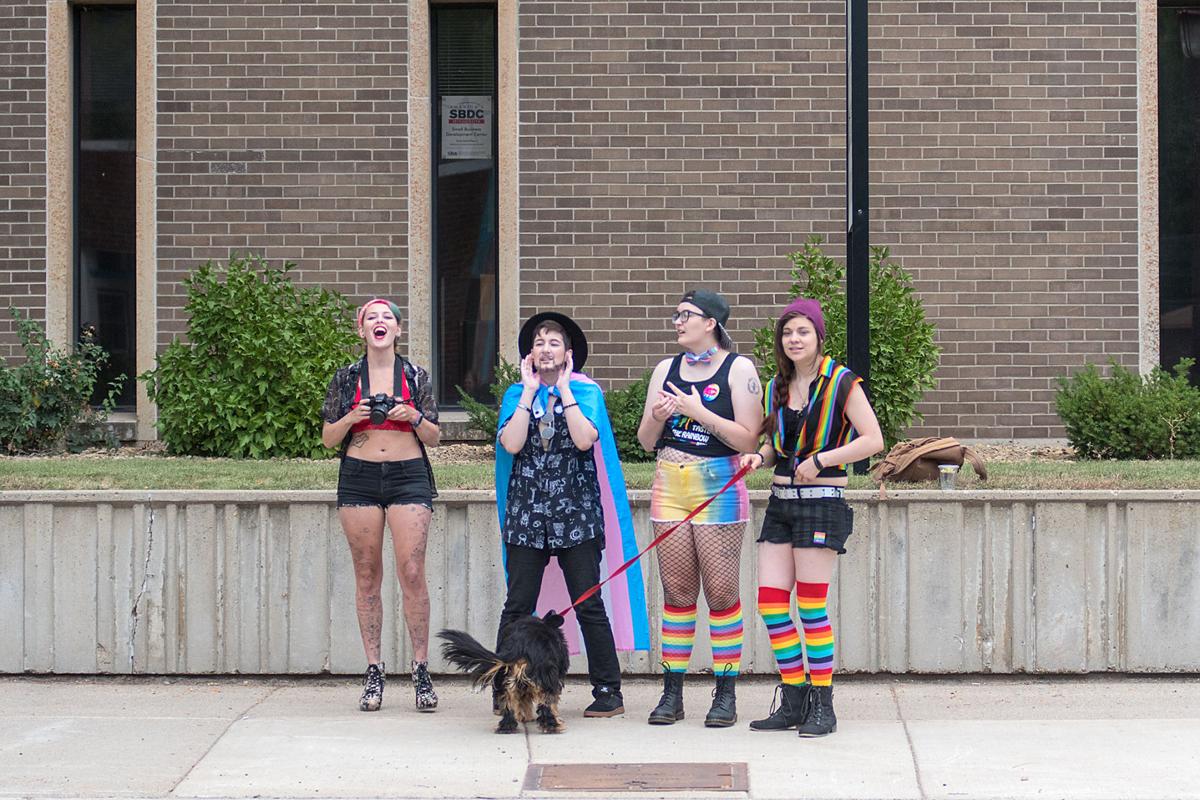 Tuyen Pitts (second from right) and Lexi Hutchins (right) hang out with friends in Riverfront Park as an impromptu group of teens gathered in the park and shared social media with one another. The teens who wore different flags to represent their different sexual or gender identities and came from New Prague, Eagle Lake, Mankato and St. Peter.

Even Godzilla was wearing one Saturday.

The bow ties paid homage to the former director of the organization that plans the celebration of the LGBT community and allies.

Jessica Flatequal, whose signature attire was a bow tie, died in April.

Festival volunteers never entertained the idea of taking a year off to mourn and regroup.

“Jessica would want the community to unite and continue on with the important work of embracing diversity and promoting pride and visibility for LGBT people” said Jeni Kolstad, interim director of South Central Minnesota Pride.

“It’s been tough but we know this is what she would have wanted,” said volunteer coordinator Gabe Hovey-Prescott.

Each of the hundred-some festival volunteers wore a T-shirt adorned with a bow tie and the word “unite” in Flatequal’s handwriting. Hundreds more participants purchased shirts or came wearing a tie tribute.

A two-story tall Godzilla on wheels (that made his debut in the Minnesota State University sesquicentennial homecoming parade) put on a bow tie for his appearance in the pride parade.

“We brought Godzilla to stomp out inequality,” said Barbara Carson, a retired professor who accompanied Godzilla along with other faculty and students from MSU’s sociology and corrections department.

MSU, at which Flatequal was director of gender and sexuality programs, had a large presence in the parade down Riverfront Drive.

Junior Anna Rasmussen was participating in a pride parade for the first time representing the Social Work Club. As a future social worker, she said she and fellow members of the student organization wanted to show they care about LGBT issues.

“I’m really excited,” she said as she waited in the staging area. “It’s really colorful and there’s a lot more purple and gold (MSU’s colors) than I expected.”

For the first time this year a group of clergy members from churches across the region marched together carrying a “God loves you” banner. First Congregational United Church of Christ Pastor Dana Mann organized the group, which she said is the latest in her work to bring churches together.

With a hand-quilted banner proclaiming “God thinks you’re fabulous,” Saint John’s Episcopal Church was among the several area churches that had entries in the parade.

“It’s essential that we send out the message that everyone is welcome,” said Meg Stump, a member of the church vestry.

Marching with the South Central College PRIDE student group, alum Chloe Hruska said the parade is the highlight of a day in which members of the LGBT community feel accepted and supported.

SCC instructor Teresa Neufelder said she marches in the parade each year to remind LGBT people “you are exactly the way you are supposed to be. You don’t need to change.”

While manning the volunteer check-in table at the pride festival that followed the parade in Riverfront Park, Leah White said she volunteers each year as a show of support to the LGBT community.

The MSU faculty member said Flatequal was a champion of “absolute acceptance.”

During a ceremony dedicating this year’s Pridefest to Flatequal and announcing the parade would be permanently named in her honor, Kolstad said Flatequal was a “beacon of hope” to many struggling people.

“She loved big and fiercely,” Kolstad said. “She loved the queers, the outcasts, and the powerless. She gave of herself happily and with impact.”

The city of Mankato is planting a tree in Flatequal’s memory Sunday at Riverfront Park. The 1 p.m. ceremony is open to the public.

“Jessica loved Minnesota and Mankato,” Kolstad said. “She did more than her share to make Mankato the kind, welcoming, affirming community it is.”

Mankato celebrated Pride Fest on Saturday, with its annual parade down Riverfront Drive and festival at Riverfront Park. This year's parade wa…