The former Shopko building on Madison Avenue is to be transformed into a variety of restaurants, an ice rink and entertainment venues. The YMCA is also looking at locating an east side facility there. 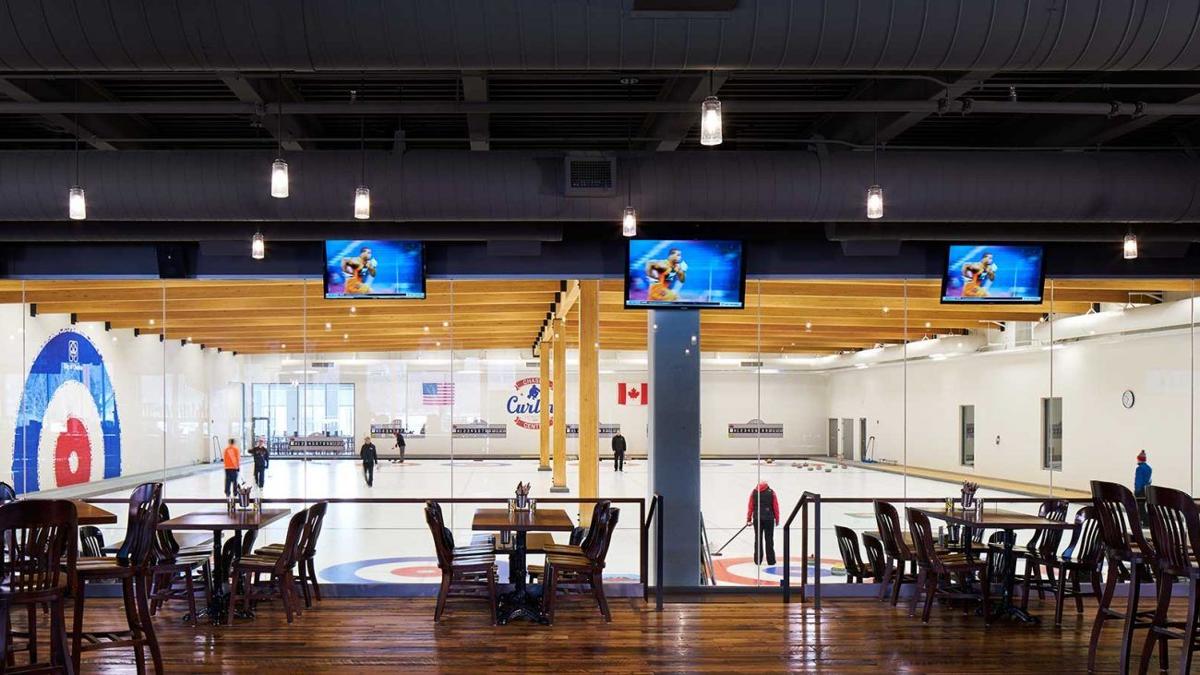 The Crooked Pint Ale House in Chaska has a windowed wall looking into a curling rink. A Mankato Crooked Pint will overlook a small ice rink.

The former Shopko building on Madison Avenue is to be transformed into a variety of restaurants, an ice rink and entertainment venues. The YMCA is also looking at locating an east side facility there.

The Crooked Pint Ale House in Chaska has a windowed wall looking into a curling rink. A Mankato Crooked Pint will overlook a small ice rink.

MANKATO — Mike Drummer remembers a common phrase he heard as his kids were growing up: “There’s nothing to do.”

When he purchased the former Shopko building on Madison Avenue Drummer had a plan to make that a less common refrain in the region for years to come.

The large building will be home to a new two-level Crooked Pint Ale House with a mezzanine overlooking a small area hockey rink. The Crooked Pint will be attached to a 500-person event space. The restaurant will also have the largest outdoor deck in southwest Minnesota.

Elsewhere inside and out will be pickleball courts, golf simulators, cornhole games, axe throwing and more.

And the Mankato YMCA board is taking a close look at using a big chunk of the building for their long-wanted east side facility.

“The city of Mankato is the perfect fit for Crooked Pint and for the 500-person event space,” Paul Dzubnar, CEO of Hightop Hospitality, said in a press release.

Green Mill on the Go, another Hightop Hospitality brand, will also be included. The new concept offers takeout and third-party delivery of all the Green Mill pizzas, wings and cheese breads.

The menu features classic pub fare with more than 50 choices for lunch and dinner as well as weekend brunch and kid’s menu selections. Other menu mainstays include Signature Burgers, Pub Pot Pies, Pub Tacos and shareables like Totchoes, featuring jumbo tater tots, and a 16 ounce pretzel.

Crooked Pint, with its flagship in Chaska, has 13 locations in Minnesota, Wisconsin, North Dakota, South Dakota and Arizona. Their Chaska site is in the Chaska Curling Club, where pub patrons can watch curlers through windows.

Drummer is shooting for an opening date of next September.

Drummer said the lower level of the Shopko building has 90,000 square feet and the mezzanine level will add another 27,000 feet.

The deck will be on the east side of the building, where the former Shopko garden center was.

A tenant is also doing four or five units of virtual golf.

“So four to eight people can play Pebble Beach or Augusta or wherever and they’ll bring your drinks to your booth,” Drummer said. “Eat, drink, play.”

They will also have several party rooms in the complex. “It should become birthday party central with all the activities. There can be parties of all sorts and things like coaches meetings or whatever.”

Drummer said he feels good being able to reuse one of the empty big box stores in town.

“How lucky we are, we have the old Gander Mountain building and Lowe’s (redeveloped) and now this.”

The last two large vacant buildings in the city are at River Hills Mall — the former Sears and Herberger’s buildings.

County land records show Drummer purchased the 2-acre property and 90,000-square-foot building for $2 million. At the time of the sale last year the taxable market value was at $4 million.

Drummer is seeking no city or public assistance for the project. While he owns the building, he will not own or operate any of the venues inside.

YMCA Executive Director John Kind said the board hasn’t made a final decision yet on whether to move into the former Shopko building but will be getting a detailed report from their consultant at their October meeting.

Kind said the opportunity came at a good time as the Y had to shelve plans for a newly constructed YMCA on the east side due to spiraling construction costs caused by the COVID pandemic and inflation.

“We did a community survey and building new was the way to go. We were ready to do a public fundraising campaign, we already had a good private campaign going, but then COVID hit.”

He said the cost estimate a couple of years ago was $24 million but said it would probably cost $32 million or more to build now.

“This just isn’t the right time for that. So we can have a significant presence (in the Shopko building) at much less cost.”

The chance to establish a presence on the east side, where residential construction continues to boom as it moves toward Eagle Lake, comes as the YMCA is rebounding from a heavy membership blow during the pandemic. (See related story.)

Drummer said he’d be excited to see the YMCA as a tenant. “When I bought the building part of what I wanted to do for the community was wellness and more physical activity and the YMCA does that.”

Drummer, a long supporter of local hockey programs, said the small area hockey rink, measuring 130 feet by 60 feet, will be a game changer for area hockey players of all ages.

“They’ve been proven over and over to aid development of players at any age, not just mite players but at any age. If they touch the puck more they get better,” Drummer said.

The ice rink will be owned and operated by Chris LaCombe, who’s spent his career in hockey, including 27 years and 3,000-plus games as a Level 4 USA certified youth coach in Minnesota as well as the past decade as a NHL sports agent who has been involved in the development of more than 300 NHL drafted players. Among the draftees LaCombe has helped to develop have been five of the past 10 first overall NHL draft picks.

LaCombe, who now lives in Elysian, has a small area hockey center in Indiana called the Ice Barn. The Mankato rink is tentatively called The Pond on Madison.

LaCombe, who watched the development of small rinks in Eden Prairie while he was coaching there, said some traditional hockey enthusiasts were critical of the idea of a smaller rink being successful or helping develop players.

But he said top players, including college and pro players, seek out the rinks.

“I’m used to being around skilled, high-end players and they really want to work on skill-specific things on small rinks. It’s big enough for NHL all-stars to work on and for kids it’s big enough of an area to have fun and develop skills.”

He said talking with those in the Mankato Area Hockey Association, colleges and others he knows there is a big shortage of ice in Mankato. “Hopefully MAHA will utilize this. It will be able to take 1,000 hours off of other ice at All Seasons Arena.”

LaCombe said the location and project being developed by Drummer will be perfect for players and parents.

“This place will be clean, safe, secure and parking at the door. Parents can drop their kids off or hang out, and they can be in and out quickly.”

He said there will also be open skating for the public, whether skating classes, figure skating or just trying out skating. LaCombe said having curling on the rink is something he’s open to if there’s interest.

He said he is not seeking any subsidies for the rink.

He is working with CAA ICON to develop the Mankato rink, a company that provides project management and other services for the construction of professional sports facilities across the country.