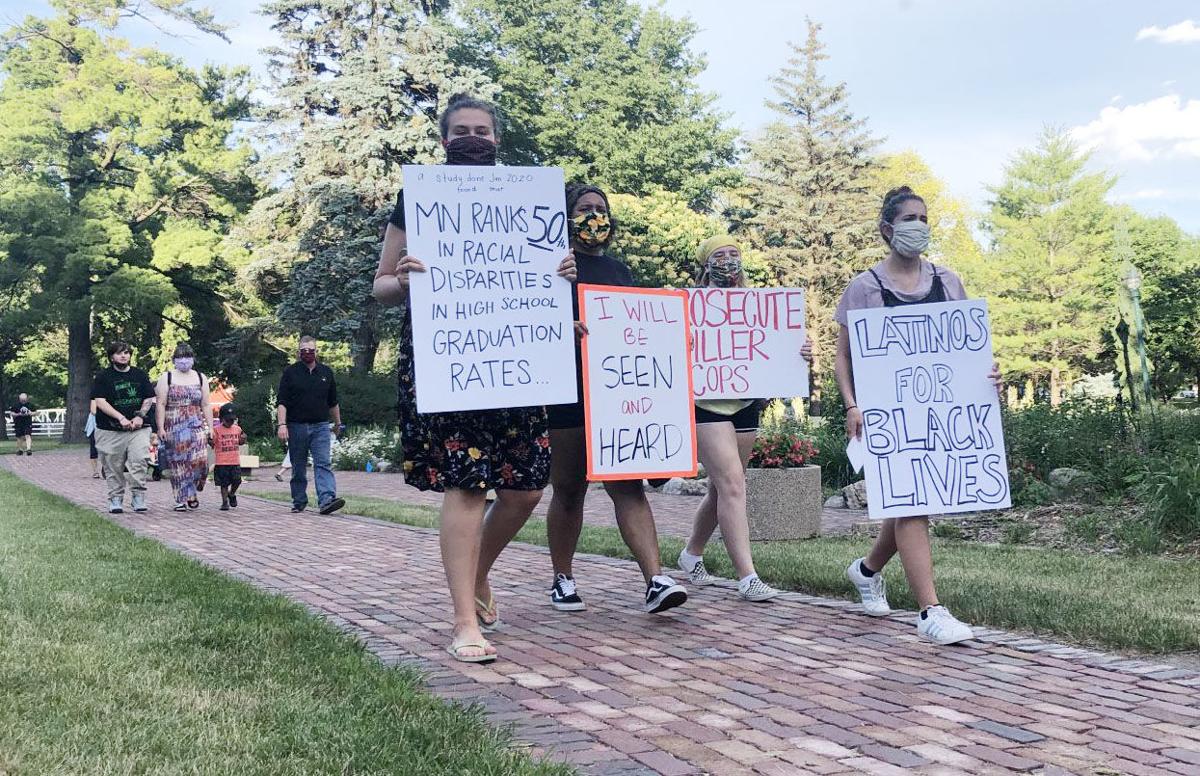 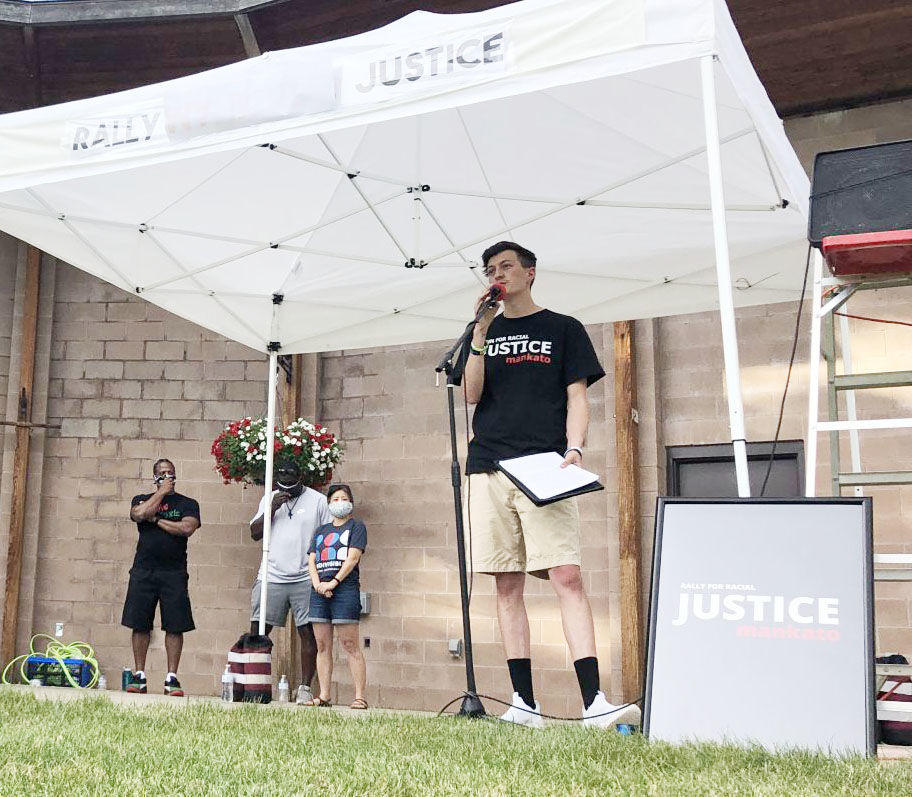 Cody Benjamin speaks Friday at a rally in Sibley Park for racial justice. He helped organize the event, which drew hundreds to honor victims of racial injustice, while connecting attendees to nonprofits working toward racial justice.

Cody Benjamin speaks Friday at a rally in Sibley Park for racial justice. He helped organize the event, which drew hundreds to honor victims of racial injustice, while connecting attendees to nonprofits working toward racial justice.

Cody Benjamin said the rally he helped organize Friday in Sibley Park was about paying tribute to George Floyd and other victims of injustice, while also introducing attendees to local nonprofits working toward racial justice.

He and wife, Brooke, brought in the Greater Mankato Diversity Council, YWCA Mankato, Indivisible St. Peter/Greater Mankato and Love & Struggle to sponsor the event, which drew a large, masked and socially distanced crowd. Along with speeches and a walk/run around the park, organizers announced a new $750 scholarship named in honor of Floyd and Philando Castile to be awarded to a Black high school senior.

As a white Christian, Benjamin said, he felt obligated to get more involved to support the Black community.

“When you hear these repeated cries for help, I think there’s a responsibility to step up whether you’re part of that community or not,” he said.

He hoped those in attendance engaged with the nonprofits so they could continue the work. Other speakers joined him in calling for persistence in the push for a more racially just society.

“It’s about continuing that conversation,” said YWCA Executive Director Natasha Lopez-Rodriguez. “This movement is a bit of a tidal wave that keeps on going so we can see true change.”

The national YWCA has been lobbying legislators to pass laws for tracking police misconduct. Lopez-Rodriguez said Derek Chauvin, the Minneapolis officer charged with murdering Floyd, wouldn’t have had the chance to do it if previous complaints against him has been taken seriously.

Just before she spoke, Bukata Hayes of the diversity council reminded the crowd about the importance of voting to achieve the change they seek. Pastor Maurice Staley of the House of Worship Church also brought up voting during his speech.

“We’re fighting for fundamental changes on the local, state and federal level,” he said. “For this fight to pack a punch we must show up at the polls.”

After a prayer led by Staley, attendees set out on a 2.35 mile walk/run around the park. The figure represented the months Ahmaud Arbery, Breonna Taylor and George Floyd were killed — February, March and May, respectively.

Yurie Hong of Indivisible told the crowd the event being a combined run, walk and rally symbolized the different ways people can help. No matter people’s skills, she said, there are local organizations who could put them to good use.

“We all need to take action in the way we can, because we’re all at different points in the journey,” she said.

Samantha Maranell and Domonick Hall came to the event with signs after previously attending rallies in St. Peter and Mankato. They said their enthusiasm for civil rights isn’t wavering.

“I think this is the civil rights movement of our generation,” Maranell said. “To me it just boggles my mind that people haven’t learned from the past and this still needs to be done, but on the same hand it does still need to be done.”

Keirra Brown, another attendee, was glad to see such a strong turnout. She came because she wanted to be part of a peaceful rally calling for justice.

“I’d like to see more stuff like this, more people coming out and our voices really being heard,” she said.