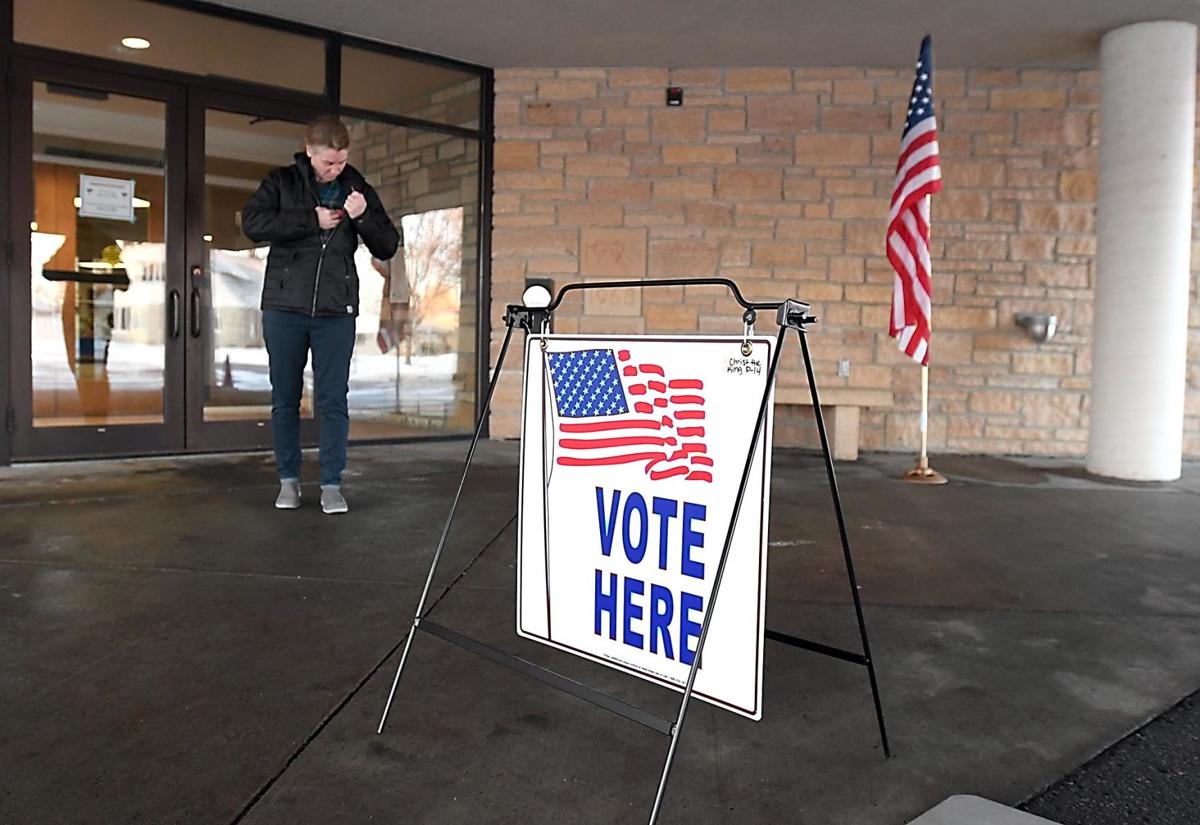 Amanda Kozitza puts on an “I Voted” sticker after casting her ballot in the primary election Tuesday at Christ the King Lutheran Church in Mankato. 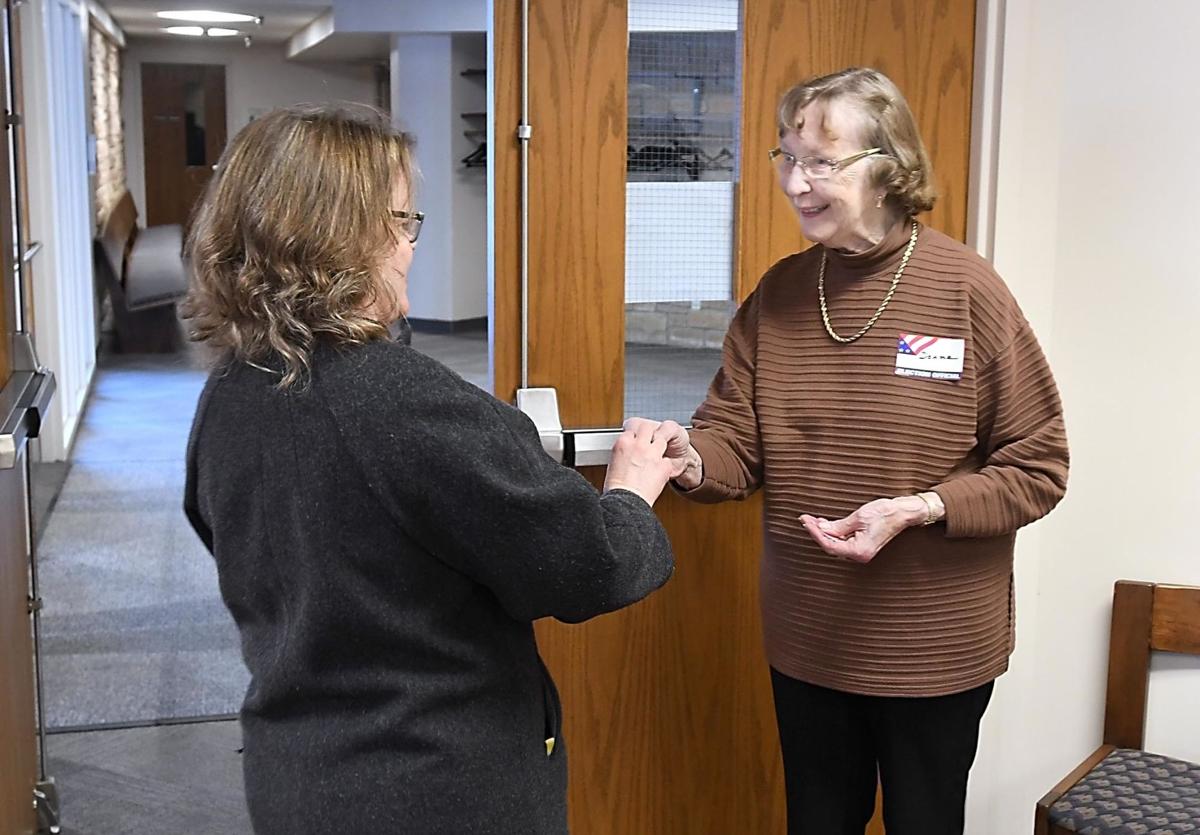 Amanda Kozitza puts on an “I Voted” sticker after casting her ballot in the primary election Tuesday at Christ the King Lutheran Church in Mankato.

South-central Minnesota joined the rest of the state and several others in the East and South in giving former Vice President Joe Biden critical Super Tuesday victories in his comeback attempt for the Democratic presidential nomination.

Voters in Blue Earth County, though, echoed the choice in western states, including California — the biggest prize among the 14 states voting Tuesday — in backing Vermont Sen. Bernie Sanders.

In the Mankato area, many voters were struggling to decide who to support after their favored candidate dropped from the Democratic race on the eve of the primary.

Merri Jo Miller was second in line at Christ the King Lutheran Church near the hospital Tuesday morning, wanting to cast a ballot before she had to be to work at 7:30. Like nearly a third of Minnesota Democrats, according to an opinion poll last week, Miller had to make a last-minute decision after her first choice, Minnesota Sen. Amy Klobuchar quit the race Monday.

“As sad as it is, I don’t think the country is ready for a woman to be president yet. I think she and Pete (Buttigieg) did the right thing.”

Miller cast her vote for Biden, who was endorsed by Klobuchar and Buttigieg, who dropped out of the race Sunday. The three candidates were seen as the more moderate choices in the race compared to Sanders, a self-proclaimed democratic socialist.

“I worry that Bernie can’t win. There are things I like about him, but I don’t think he can win against Trump,” Miller said.

Vicki Abraham also cast her vote for Biden, saying she had been planning to vote for Klobuchar. “Amy dropped out and said vote for Joe, and I did.”

Residents of rural townships in Blue Earth County, where voters cast mail-in ballots, didn’t have that option. Klobuchar’s withdrawal came after they’d made their choice. With those townships counted first after polls closed at 8 p.m., Klobuchar had 43% of the vote in Blue Earth County — well ahead of any other candidates. As Tuesday’s votes from traditional polling places were added in, her percentage plummeted and Sanders and Biden rose to the top.

Jen Cucurullo said she was leaning toward Klobuchar and Buttigieg and had a difficult decision choosing among the remaining candidates.

“I’m going with Elizabeth Warren. I like the things she’s saying about health care and education, and she has a history with the middle class.”

“The stuff he did in New York is just awesome. And I think people should be able to outlive their mistakes,” Drganc said of Bloomberg’s support as mayor for stop-and-frisk anti-crime tactics.

Matt Houselog of Eagle Lake didn’t say who he was going to vote for, but he was somewhat excited by the idea that Minnesota had joined the vast majority of states in allowing voters to participate in a presidential primary, noting that he and his wife had never had the opportunity despite reaching voting age 15 years ago.

“We’re both 33 and this is our first Super Tuesday voting,” Houselog said.

In a state that has traditionally awarded its presidential nomination delegates via party caucuses, Minnesota last had a presidential primary election in 1992. Voters asking for a Democratic ballot had more than a dozen choices, although the number of legitimate contenders is much smaller than when the ballots were printed. On the Republican ballot, the only name was President Trump’s.

Jennifer Thomas of Eagle Lake came to City Hall to cast her vote for Trump even though the president had no challenger on the ballot.

“I feel my voice needs to be heard. I feel it’s an American duty. I feel it’s a privilege, and it’s what our forefathers fought for — our freedom to vote,” said Thomas, a Marine Corps veteran.

Jan Bentdahl was in line early despite the lack of drama in the Republican race.

“It’s my duty to vote,” said the 70-year-old Bentdahl, an Army and Air Force veteran.

He said he believes Trump has been good to the military and has kept the promises he made when he ran.

“The other side wastes a lot of tax money. It’s a big circus on the Democrat side. All they wanted to do was waste time on impeachment,” Bentdahl said.

Sanders was the biggest story in Blue Earth County, winning a narrow victory over Biden with just two of 54 precincts left to count.

“I don’t know if ‘inspired’ is the right word,” said Melissa Morrison of Eagle Lake of her decision to come to the polls for Sanders. “... He seems like he has a plan — like a real plan.”

Habido Hassan, her daughter Fatuma and her son Abdullahi had more enthusiasm for the 78-year-old senator.

“We’re looking for a real change, and we feel like Bernie can do that for us,” Abdullahi said.

Matt Rausch of Eagle Lake worries that any of the Democratic candidates will move the nation toward socialism.

“I don’t want a Democrat in office. I’ll do whatever I need to do,” said Rausch, an automotive technician.

While the passion of voters was sometimes strong, voter turnout wasn’t. In Blue Earth County, it appeared that the number of voters would be roughly a quarter of the turnout in the 2016 general election.

While there was some concern voters might be confused by the new primary format in which they had to choose which party’s ballot they would ask for, election judges Thomas Senden and Judy Date said voters who came in were familiar with the rules and there were no questions or confusion.

Jaci Kopet, who oversees elections in Nicollet County, said the election was running smoothly, but they did have calls from people Monday who had voted early by mail and wanted to change their vote after Klobuchar announced she was dropping out.

Those who voted by mail, either as an absentee voter or those who live in mail-voting precincts, are barred by state law from changing their vote within seven days of the election.

Kopet said she had received more than 1,100 ballots in the mail as of Monday night.

Michael Stalberger, who oversees elections in Blue Earth County, said they too had fielded calls Monday from voters asking if they could change their mail vote. He had received about 2,200 mail ballots as of Monday night.

Stalberger said Tuesday morning there were no early reports of voting problems.

“Our biggest problem was a bent flag pole where they couldn’t attach the flag,” he said. State law requires a flag at each voting location, with most being portable stand-up poles. He said someone went to the Bethel Baptist Church location to fix the pole so the flag could fly.

“Duct tape saved the day. We have a contingency for everything.”