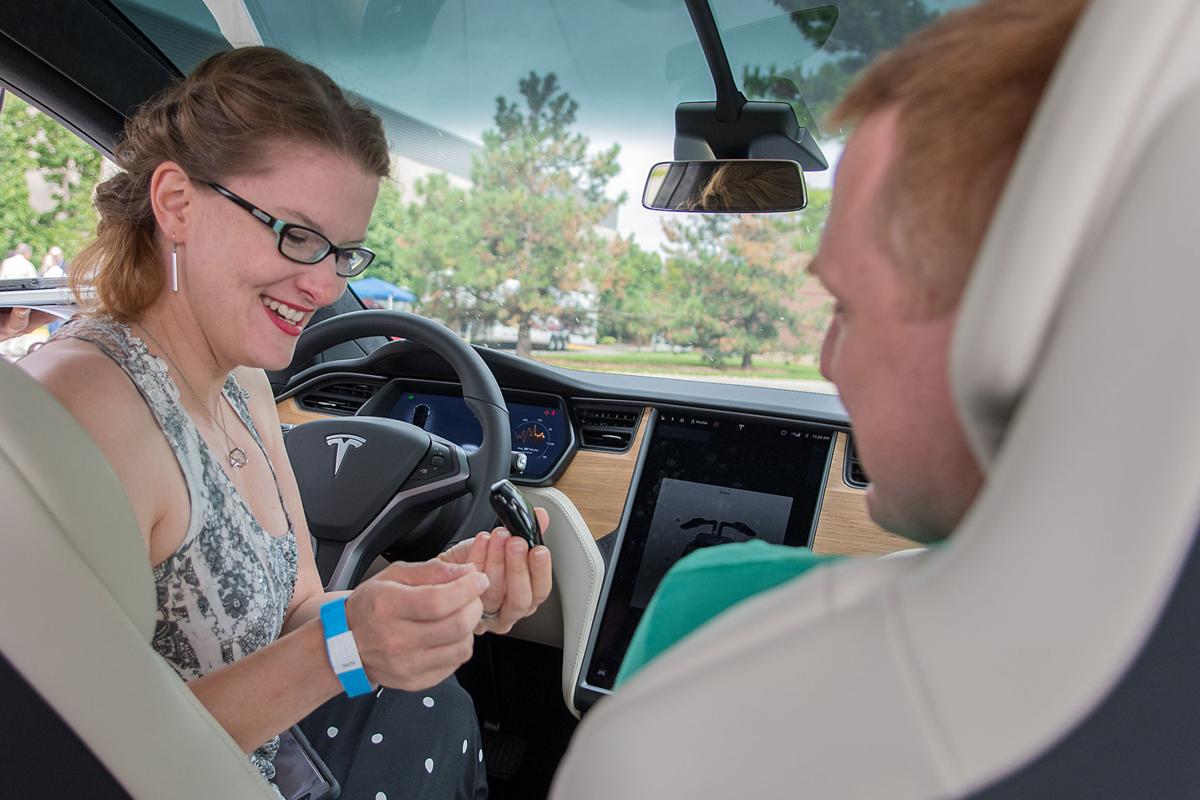 Mary Canaday and Adam Canaday check out the key fob, shaped like a Tesla vehicle, before driving a Tesla Model X at the Recharge event Saturday. The key fob controls the locks on the doors and can also open and close the doors. 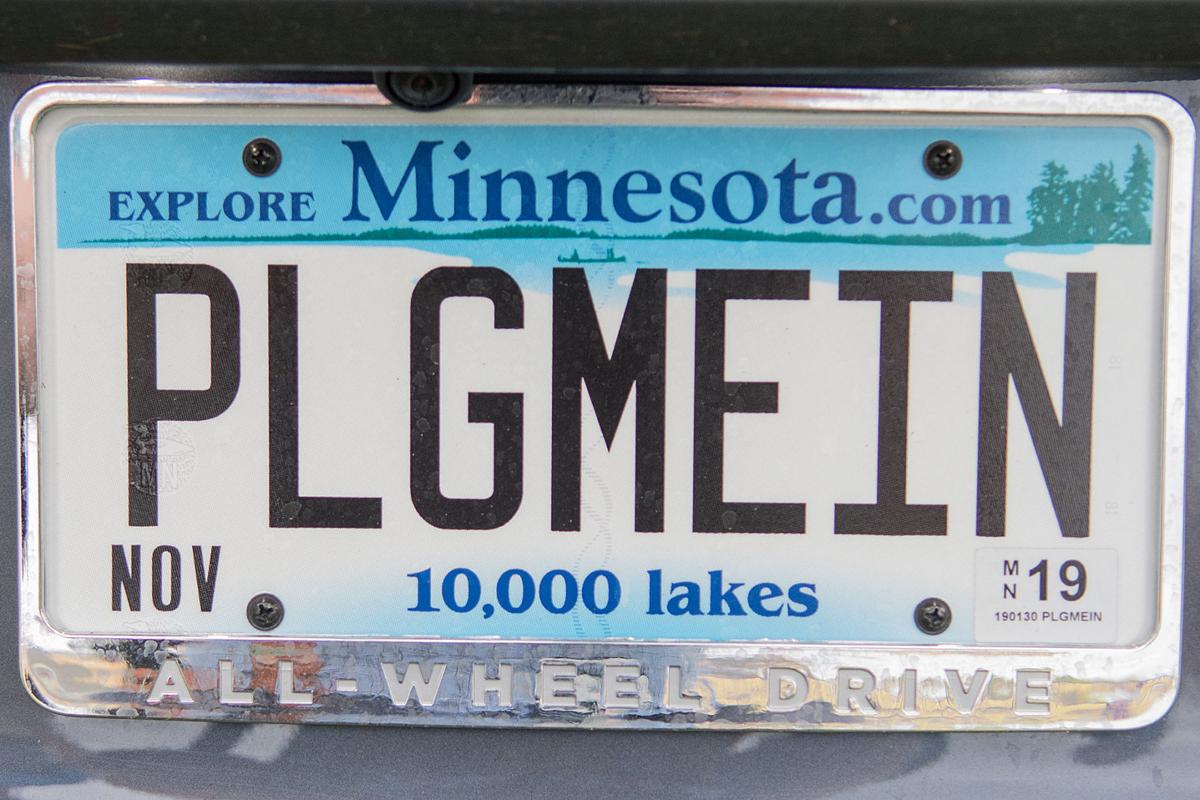 A personalized license plate on a Tesla car at Recharge.

Josh Myers steps out of a Tesla Model X at the Recharge event held Saturday on the Minnesota State University campus. A variety of electric vehicles were on hand for people to test drive or ride in at the event, an effort by local leaders to encourage electric vehicle adoption and infrastructure.

Mary Canaday and Adam Canaday check out the key fob, shaped like a Tesla vehicle, before driving a Tesla Model X at the Recharge event Saturday. The key fob controls the locks on the doors and can also open and close the doors.

A personalized license plate on a Tesla car at Recharge.

Community stakeholders plan to add level-three charging stations in Mankato, North Mankato and St. Peter. These higher level stations recharge electric vehicles to about a 180-mile range within 30 minutes, but they haven’t been as widely available as slower level one or two chargers.

Olseth, who heads up the Olseth Family Foundation, bought a Chevrolet Bolt electric car about a year ago. He said once the charging infrastructure is widespread enough to make longer trips convenient, the economics should prove attractive to people.

“How we shape all of this is conversations about economics,” he said. “For our community it’s keeping our energy local and the savings stay in the community.”

Area developers, cities and nonprofits are already envisioning how to reinvest those potential savings in the community. After Olseth met Tony Frentz of Neubau Holdings at last year’s Recharge Mankato, an event thought up by Olseth and Nancy Zallek of the Mankato Area Foundation to showcase electric vehicles on Minnesota State University’s campus, the two decided to purchase a level-three charger to be installed in Frentz’s Eide Bailly Center project downtown.

They donated the charger to the Mankato Area Foundation, which will use the proceeds for philanthropic causes. Zallek, the foundation’s president and CEO, called the donation a great way to promote clean energy and be charitable at the same time.

She was among the organizers of Recharge Mankato’s 2019 event Saturday at MSU’s Myers Field House. After facilitating 160 test drives in electric vehicles last year, this year’s goal was 300.

Olseth and Zallek have a larger goal to see 40% of all new vehicles in the region be plug-in electric vehicles by 2030. Zallek said North Mankato and St. Peter’s plans for charging stations will help get there.

North Mankato could add two level-three chargers, one for sure as part of its Commerce Drive renovation project and a potential second on Belgrade Avenue. St. Peter, meanwhile, is looking into adding level three and two charging stations — the latter gives users about 25 miles of charge per hour, per Olseth.

South Central College President Annette Parker said her institution is also exploring adding charging stations. The college already has an electric car for its automotive service program, and portions of proceeds from any future stations would go toward scholarships and programs training students to work in the electric vehicle sector.

Saturday’s Recharge event drew long lines for the test drives, with the Olseth Family Foundation donating $20 for each one to Mankato VEX Robotics. Before the test drives started, organizers led a tour on the state’s first electric school bus from Lakeville.

Joseph Sullivan, deputy commissioner of energy resources with the Minnesota Department of Commerce, spoke before the bus ride, saying the biggest thing people can do to reduce greenhouse gas emissions is buying an electric vehicle. A Mankato resident, he commutes to and from the Twin Cities in an electric vehicle.

He described himself as a car enthusiast who loves auto racing. After running the numbers between gas versus electric, though, he said the electric option just made sense.

His electric bill — from his home charging station — did go up by about $100 after he bought the car, but it was offset by the $450 per month he no longer had to spend on gas.

“It is that win/win that you rarely find,” he said. “That was what convinced me.”

Not everyone test driving cars Saturday was as convinced yet, although their questions seemed to be restricted to how far along the technology is at this point. MSU student Chris Mlazgar said electric vehicles’ longevity is his main concern at this point, but he’s on board if that question were to be resolved.

“They’ve only been around for a short time, so mechanically and battery tech, see how that holds up over time,” he said. “If that all seems good, then hell yeah.”

Crystian Hoff, a mechanical engineering student at MSU, emerged from a Tesla beaming after his test drive with friend Andrew Benson. Hoff said the car had the smoothest acceleration he’s ever seen.

“You don’t get the bumps because you’re not changing gears,” Benson, who had driven an electric vehicle before, pointed out.

Although Hoff said it’ll be a few years before he can afford a Tesla, he’s sold on the technology.

“I’m overwhelmingly wowed by that,” he said. “That’s the best vehicle I’ve ever driven, and he (Benson) tells me that’s the least powerful model.”

The federal Office of Energy Efficiency and Renewable Energy notes electric vehicles can be more expensive to purchase than “conventional counterparts,” while acknowledging tax credits available at federal and state levels to reduce up-front costs. Automakers reported 361,307 electric vehicles were sold in 2018, an 81% increase from the year prior, according to Consumer Reports.

Olseth, who commissioned a study from Silicon Valley-based Reach Strategies on electric vehicle adoption, thinks having 1,000 new electric vehicle drivers in the Mankato area is a real possibility in the near future. He said the strategies to add more level-three chargers could make the region an electric vehicle leader in the Midwest.

“As a community, to have a level-three charger in particular is an invitation for people outside the community to come in,” he said.