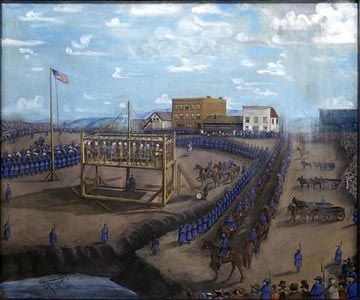 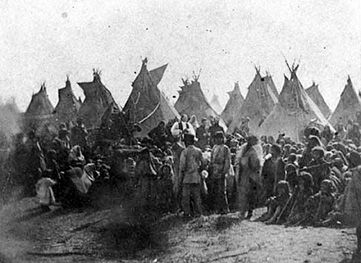 At 10 a.m. on the day after Christmas in 1862, 38 Dakota men were led out of a nearby prison to a scaffold specially constructed for their execution.

An estimated 4,000 spectators crammed the streets of Mankato. Col. Stephen Miller, charged with keeping the peace in the days leading up to the hangings, had declared martial law and had banned the sale and consumption of alcohol within a 10-mile radius of the town.

The scaffold itself was an engineering feat, designed with a single platform that would fall with the cutting of one rope.

As the men took their places on the scaffold, white muslin coverings pulled over their faces, they sang a song and grasped each other’s hands.

Capt. William Duley, who had lost several members of his family in the attack on the Lake Shetek settlement, cut the rope with a single blow from an ax as spectators cheered.

The bodies dangled from the scaffold for a half hour before being cut down and taken to a shallow mass grave on a sandbar between Mankato’s main street and the Minnesota River.

That night, most of the bodies were dug up and taken to physicians for use as medical cadavers.

While the war and execution remain the most dramatic historical events in Minnesota history, the somber reality is that the Dakotas suffering and death toll would grow dramatically following the war.

“The consequences for the Dakota didn’t end on Dec. 26, 1862. They didn’t end in 1863. I’m not sure they’ve ended yet for them,” said Ben Leonard, director of the Nicollet County Historical Society.

And Leonard said the U.S.-Dakota War was just the beginning of much more bloodshed to come.

“If you look at the grand scheme of history, the U.S.-Dakota War wasn’t an isolated event, but the first event in the war between the U.S. and the Plains Indians that didn’t end until Wounded Knee.”

Following the hangings in Mankato, the 265 Dakota men who were convicted but not executed were held in prison in Mankato over the winter of 1862-63. In the spring they were transferred to Camp McClellan in Davenport, Iowa, where they were held in prison for almost four years. On March 22, 1866, President Andrew Johnson ordered the release of the 177 surviving prisoners. They were moved to the Santee Reservation near Niobrara, Neb.

At the same time, 1,600 Dakota women, children and old men spent the winter following the war at an internment camp on Pike Island, near Fort Snelling.

Living conditions were poor and infectious disease killed more than 300.

In the spring of 1863, the surviving Dakota were forced aboard steamboats and relocated to the Crow Creek Reservation, in the southeastern Dakota Territory, a place stricken by drought at the time. Many of the survivors of Crow Creek moved three years later to the Niobrara Reservation in Nebraska.

That spring Congress abolished the reservation in Minnesota, declared all previous treaties with the Dakota null and void, and undertook to expel the Dakota from Minnesota. A bounty of $25 per scalp was placed on any Dakota found free within the boundaries of the state, a bounty later increased to $200.

The only exception to this legislation applied to 208 Mdewakanton, who remained neutral or assisted white settlers in the conflict.

Following the war, Little Crow — who led the Dakota in battle — fled with about 150 of his followers to present-day North Dakota and Canada. In June 1863, Little Crow returned to Minnesota on a horse-stealing foray. On July 3, a farmer shot Little Crow while the Dakota chief picked berries with his son near Hutchinson. The farmer received a $500 reward from the state.

The U.S. military pursuit of the Dakota and other Native Americans continued westward in 1863 and 1864. As the frontier moved westward, new fighting erupted.

In 1890 at Wounded Knee, the generation of warfare that began at Acton, Minn., in August 1862 came to an end with a bloody massacre of 150 Lakota Indians.

Two weeks ago, 30 Dakota on horseback left the Lower Brule reservation in South Dakota on a …