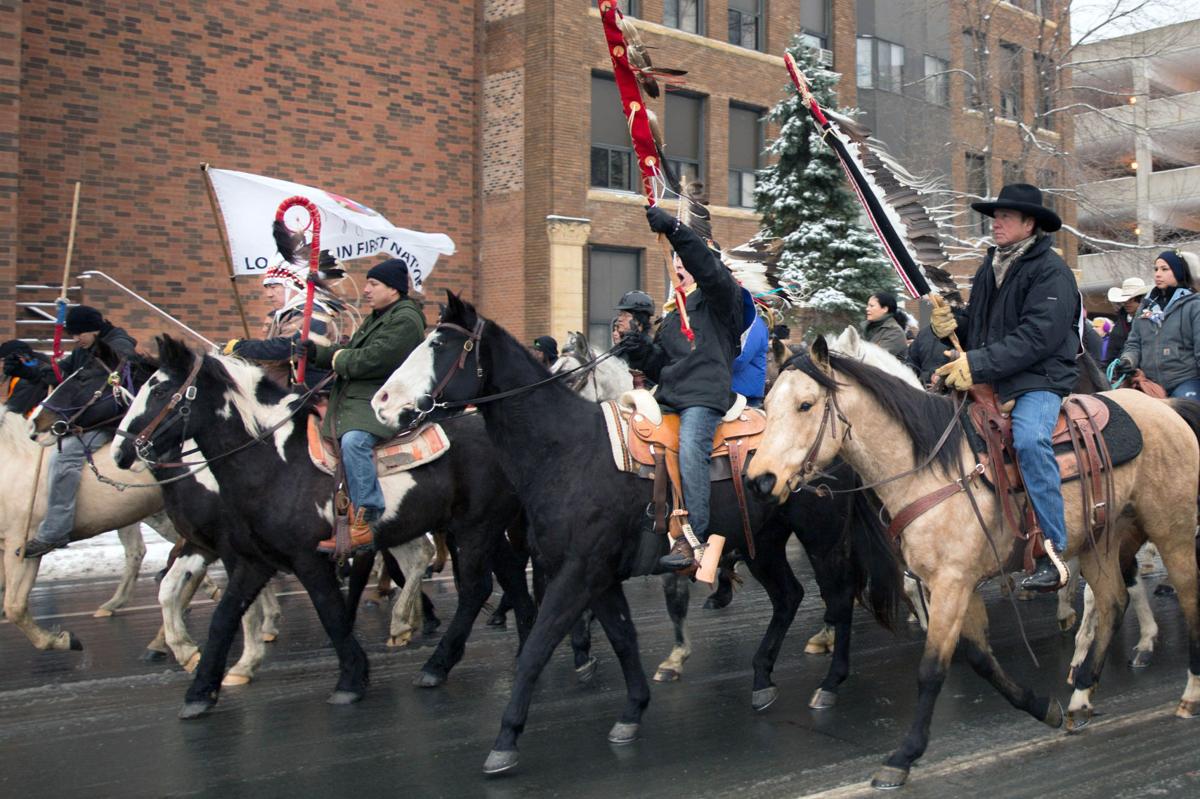 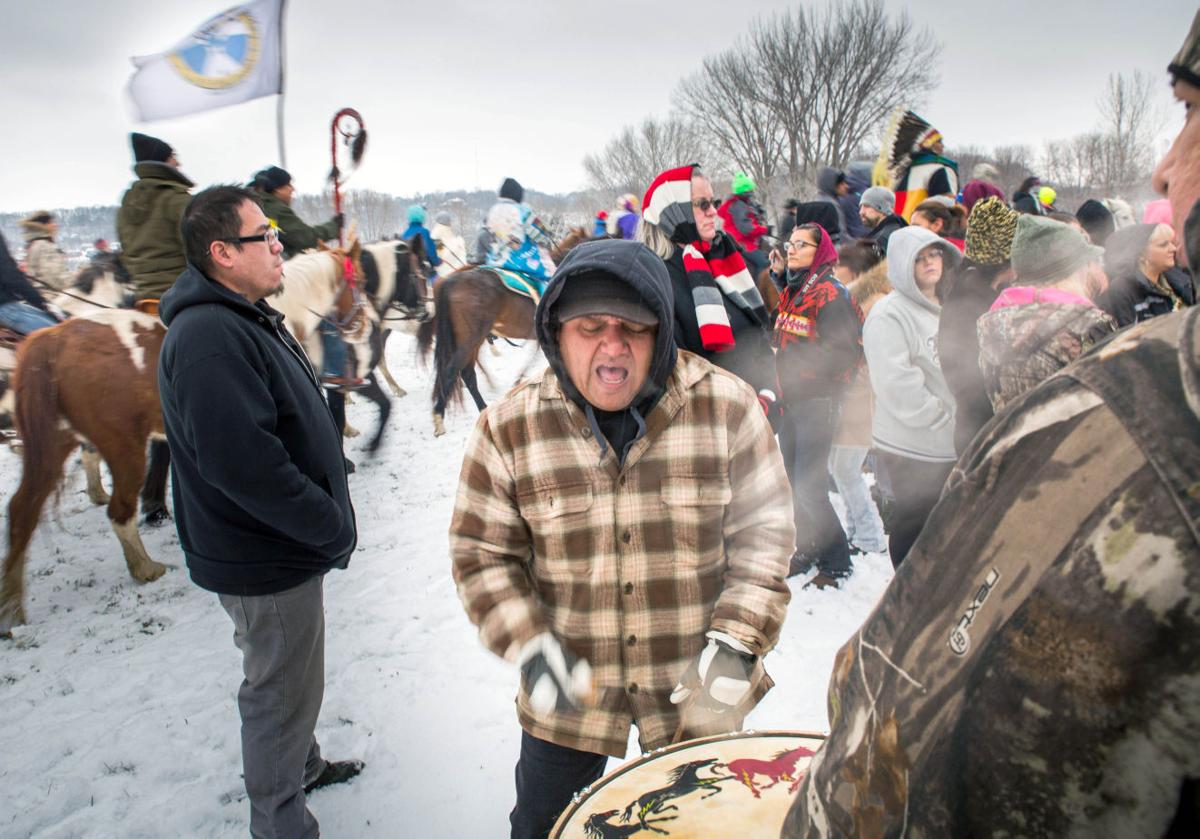 Native American drummers sing and beat drums as riders circle an encampment at Land of Memories Park Saturday shortly before finishing the journey to Mankato in honor of the 38 Dakota hanged in 1862. Photo by Trevor Cokley 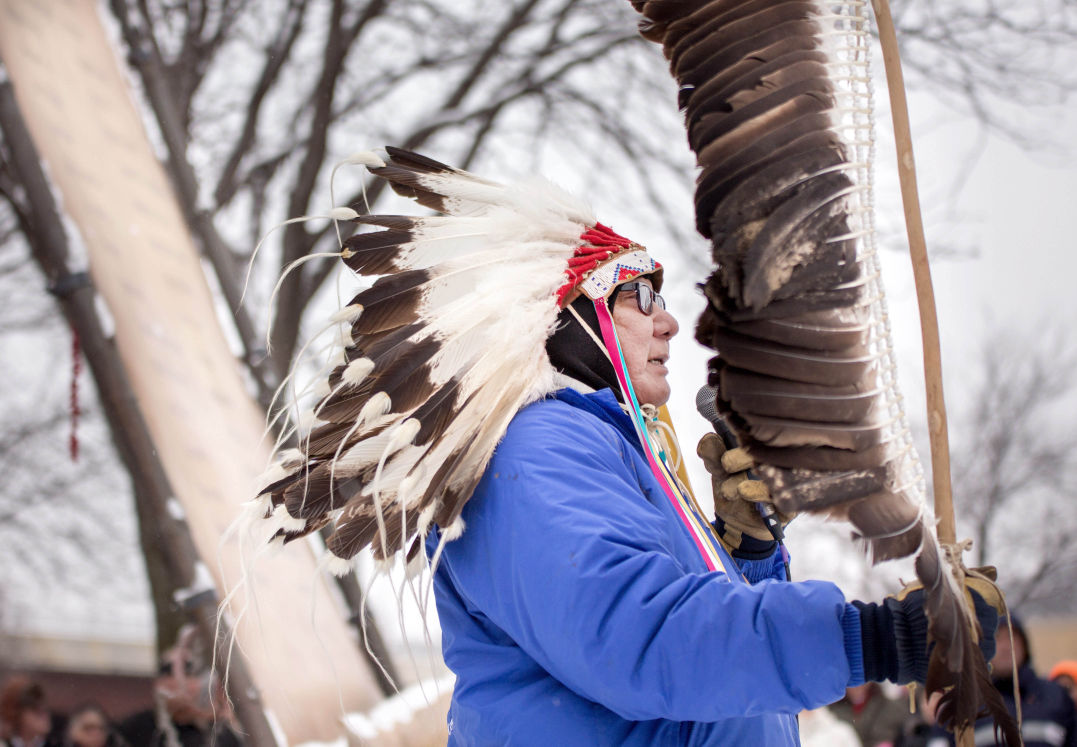 A speaker addresses the audience at Reconciliation Park after riders finished their journey to Mankato in honor of the 38 Dakota hanged in 1862. Photo by Trevor Cokley 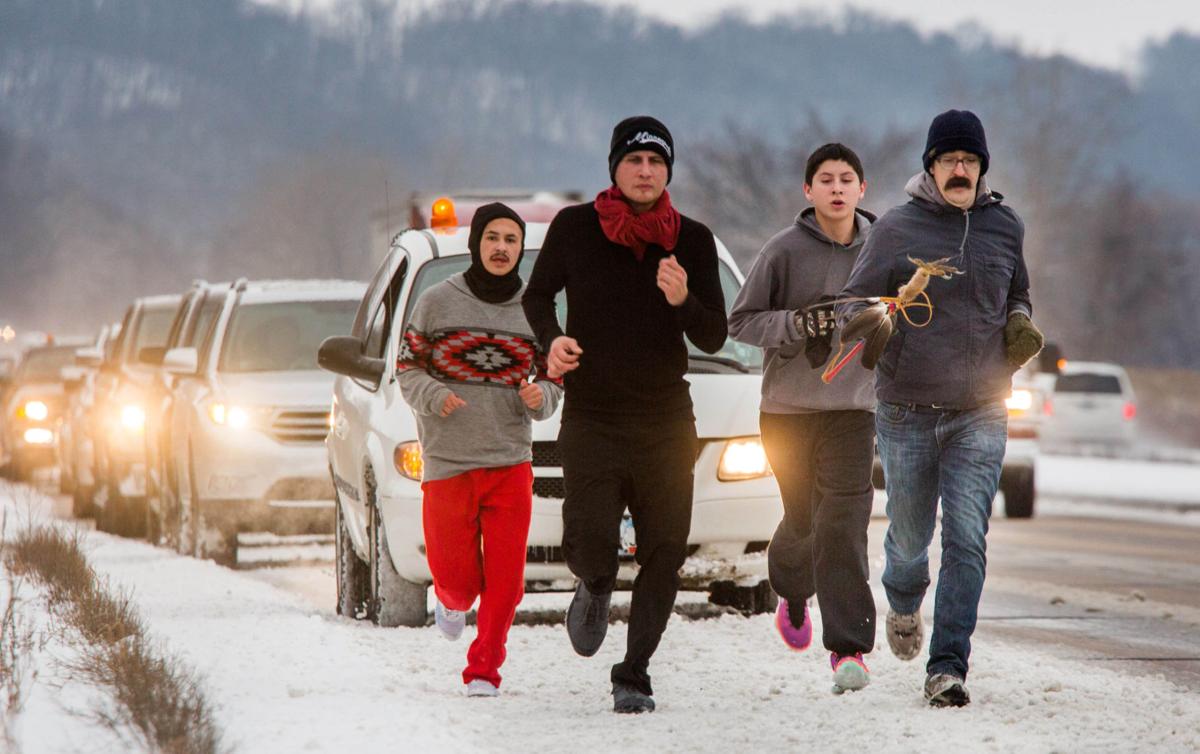 Runners followed by a trail of support vehicles go south Saturday morning on Highway 169. They were carrying a staff from Fort Snelling, where the 38 Dakota who were executed in Mankato were imprisoned. Photo by Trevor Cokley

Native American drummers sing and beat drums as riders circle an encampment at Land of Memories Park Saturday shortly before finishing the journey to Mankato in honor of the 38 Dakota hanged in 1862. Photo by Trevor Cokley

A speaker addresses the audience at Reconciliation Park after riders finished their journey to Mankato in honor of the 38 Dakota hanged in 1862. Photo by Trevor Cokley

Runners followed by a trail of support vehicles go south Saturday morning on Highway 169. They were carrying a staff from Fort Snelling, where the 38 Dakota who were executed in Mankato were imprisoned. Photo by Trevor Cokley

MANKATO — Hundreds of people gathered in the cold and the snow at Reconciliation Park Saturday morning, trying to heal.

Some of them traveled hundreds of miles on horseback. Others had spent the night running from Ft. Snelling. Many just wanted to take part in a ceremony honoring the execution of 38 Dakota warriors more than 150 years ago.

Continuing a decades-long tradition, Dakota, Lakota and other Native Americans traveled to Mankato to honor the 153rd anniversary of 38 men who were hanged at the end of the Dakota War of 1862. They also came to preach forgiveness for the U.S.'s persecution of Native Americans in the 19th century, and to move forward with their respective cultures.

"The fact being is the blood of these men runs today and didn't stop when they were hung," said Darwin Strong, coordinator on the Minnesota side for the Dakota Memorial Ride. "They have ancestors here that come from all over."

In the 1850s, U.S officials began to back off from previously agreed treaties with various Dakota tribes and often delayed payments to the Dakota. In addition, the Dakota lost much of its previously promised land after Minnesota became a state in 1858.

A combination of reduced resources and little to no aid from federal officials ended up sparking a series of battles between Dakota and settlers after the Dakota tried to purchase food on credit and were rejected.

The fighting lasted for a little more than a month from mid-August through the end of September, when many Dakota surrendered to the U.S. Army.

At first, 303 men were tried and sentenced to be executed as a result of the war. Yet many were convicted in a matter of minutes with no representation for the Dakota, among other issues with the trials.

President Abraham Lincoln stepped in to review each case, and ultimately pardoned 265 men. That left 38, who were taken from Ft. Snelling, where they were imprisoned, to Mankato, where they were hung on Dec. 26, 1862.

The hanging remains the largest mass execution in U.S. history.

"When we can learn to forgive, we truly live," Peter Lengkeek, a member of the Crow Creek Sioux Tribe, told the audience gathered at Reconciliation Park.

Saturday marked the 12th year of the Dakota 38+2 Wokiksuye Memorial Ride, according to Strong. Dozens of people set out from Crow Creek, South Dakota, to Mankato during December as part of the ride. Yet Dakota have organized a run from Ft. Snelling to Reconciliation Park, the site where the 38 Dakota men were hanged, for decades.

Tim LaBatte, of Peever, South Dakota, participated in the memorial run in the 1980s when he was 26, two years after he ended his service with the Marines. Saturday was his second year as part of the memorial ride.

Several of LaBatte's ancestors fought during the Dakota War of 1862. He takes part in the ride, which took about two and a half weeks to travel more than 300 miles, to honor their memory and to continue keeping the Dakota traditions surrounding horses alive.

"Being scattered across the states, and being horse people, we knew that horses were a big part of the culture," LaBatte said. "We knew that that would be a big experience and that our ancestors would be proud to have horses here as part of the remembrance of them."

For LaBatte, the one of the best parts of the ride is seeing children and teens take part.

The horses don't hurt as a motivator, either.

"Everybody loves horses," he said.

During the ceremony, Native American leaders spoke about the importance of remembering the Dakota, forgiving people for the things they've done and learning to love one another. Several runners and riders also spoke, sang songs and conducted prayers as part of the event.

Those messages are important not just for the Dakota, but for everyone, according to Strong.

"If people don't learn to forgive, we'll always live with anger in our heart," he said. "We have four colors of people on this planet — red, white, yellow and black. Nobody's going anywhere. We're all in this together."