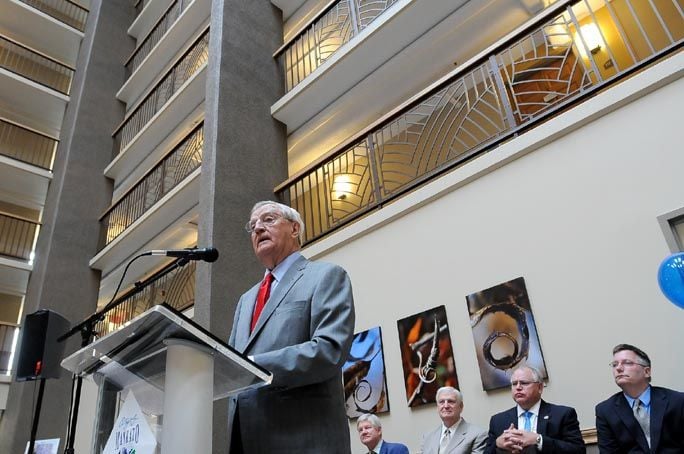 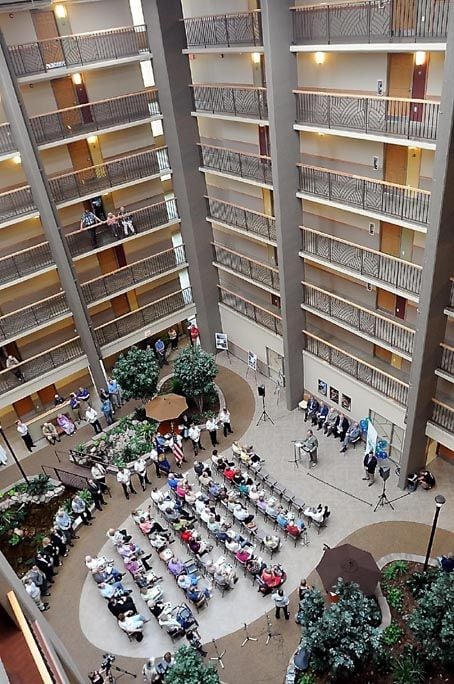 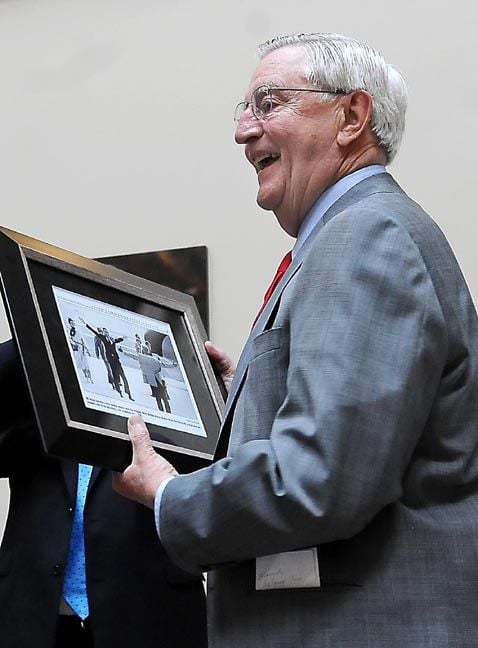 John Cross Former Vice President Walter Mondale smiles after being presented with a photograph of him greeting Mayor Herb Mocol during a visit to Mankato in 1980. Mondale returned to Mankato Friday for the dedication of the newly remodeled Orness Plaza.

John Cross Former Vice President Walter Mondale smiles after being presented with a photograph of him greeting Mayor Herb Mocol during a visit to Mankato in 1980. Mondale returned to Mankato Friday for the dedication of the newly remodeled Orness Plaza.

Gary Peterson likes living in the renovated Orness Plaza. He likes the central air, the new appliances, the bigger closets. He likes playing pool in the game room and exercising in the new fitness room.

The five-year resident has always enjoyed watching baseball at Franklin Rogers Park out of his seventh-floor window. And the new windows have tighter seals, so they don’t leave rooms drafty in the winter.

The average age of Orness Plaza residents is 74, and four-year resident Cheryl Rader acknowledges that some residents complain about the new-ness.

“When we get older, we don’t like change,” she said.

Smoking was banned from Orness Plaza along with the renovation, but Rader said some people continue to smoke in their rooms.

To her, the new Orness is a wonder.

Former Vice President Walter Mondale, who spoke at the dedication of Orness Plaza in 1971, said at Friday’s dedication, “I’m here to make a commitment to you. I’ll come here every 41 years.”

Decades ago, he said, cities had no places for the elderly to live. Starting in the 1960s, the federal government started to help.

We saw firsthand, he said, “how much it meant to them to have a decent, affordable place to live and have friends.”

Orness Plaza has 101 units, of which all but three are one-bedroom, and is owned by the city. Residents’ rent is based on their income, which in this case means they pay 30 percent of their income as rent.

He moved here two months ago, and said he was paying $300 a month before that just for land rent to park his trailer. Now, he doesn’t pay much more than that and everything is included.

“I’m tickled to death I could get in,” he says.

The renovations were funded by a $9.16 million federal stimulus grant.

Orness Plaza is also the site of a first-of-its-kind study that aims to determine if environmentally friendly construction makes the elderly healthier.

David Jacobs, director of research for the National Center for Healthy Housing, is leading the $650,000 study.

The data won’t be in until next year, but he said he believes this sort of construction will cut down on diseases such as asthma, mental health and heart problems.

While there are seven vacancies at Orness Plaza, there is a waiting list 60 names deep. The city is still accepting applications.

Residents’ mental health turned out to be the biggest beneficiary of the renovations. When one of the two study groups started the year, they had an average of 25.7 days of good mental health in the previous month, compared with 26.5 for a comparison group of non-Orness residents.