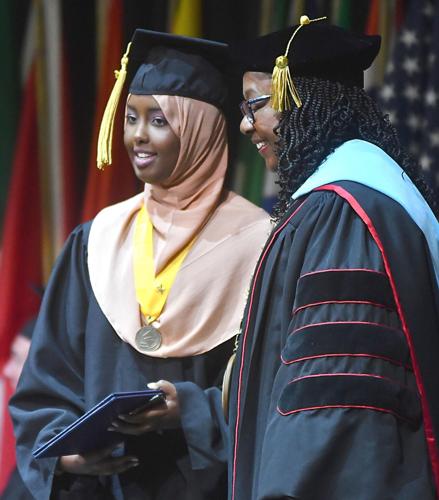 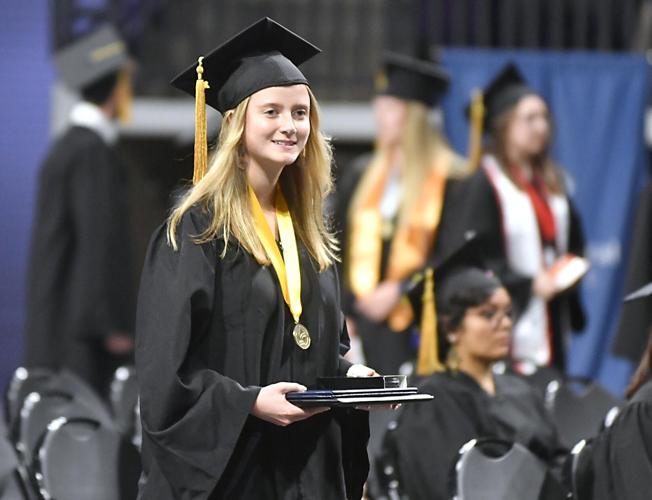 They can now enter any of the seven Minnesota State universities as a junior with their general education requirements already satisfied and earn their bachelor’s in about two years.

Students come to South Central College from all over southern Minnesota, with about 325 high school students participating in the college’s PSEO program this year. That’s an increase over previous years, said Laura Attenberger, South Central’s director of secondary relations.

Some educational leaders think the pandemic had something to do with the increased interest in PSEO classes, she said, as more students began taking online classes during COVID.

“PSEO is becoming more accessible to students,” Attenberger said. “We always keep student success in mind. We want the program to be as accessible as possible for students so students can either take one course or multiple courses.”

“I decided to do PSEO for many reasons,” said graduate Sumia Sabrie. Some of her classes were online and others were at South Central’s North Mankato campus.

“First, it would allow me to finish my generals for free. It also gave me exposure to many fields as I took classes and figured out my major. Finally, going to SCC gave me the college experience early. I felt that this was useful since I’ll be able to transition to a 4-year college much easier now.”

The Minnesota PSEO program enables eligible 10th, 11th and 12th -grade students to enroll in college or university classes, earning both college and high school credit upon successful class completion. PSEO students can take anywhere from a few classes to a full load at the college or university, at no cost to the student or their family.

“I thought I would take advantage of the PSEO option and get as many credits done as I could, which resulted in earning my Associate of Arts degree,” said Vettrus.

Her next step on her educational journey will be attending Minnesota State University, where she will major in aviation. She said taking PSEO classes helped her decide on her major.

“I took a couple of science classes because I was initially thinking of going into the medical field,” Vettrus said. “Once I realized that wasn’t something I wanted to do, I realized I wanted to pursue aviation instead. My physics class at South Central helped me decide.”

When asked what she would tell high school students considering PSEO, Vettrus said, “Take advantage of the option, because in the long run, it will save you money and prepare you for the future, whether that be continuing on to further your education or joining the workforce. I am thankful for the PSEO program and the education I received at South Central College.”

Sabrie recommends that high school students interested in PSEO create a plan with their counselor.

“If you create a plan ahead of time, it is possible to get a degree with little stress,” she said. “It is an amazing opportunity that I think many people should take advantage of.”

“PSEO is a great option for high schoolers because it will save them time and cost after they graduate from high school,” Attenberger said.

South Central College is reimbursed for PSEO students’ tuition through a program with the Minnesota Department of Education.

Eight of the nine graduates Thursday graduated with honors, which Attenberger said they’re very proud of.

“They want to succeed,” she said. “This is something students take the initiative on. PSEO students are responsible for their own education. And it’s an indicator that they are looking to succeed after high school as well. They want to get a head start.”

“It really helps with my future endeavors,” said Elizabeth Peterson, one of Thursday’s nine graduates. “I really liked the aspect of having two years of college paid for.”

Attenberger said she isn’t allowed to report how much PSEO students save in tuition and textbook costs, but Peterson estimated her savings at being around $20,000.

Students find PSEO classes to be more challenging than their high school classes, which makes the college classes a good fit as PSEO students tend to be driven.

“It was nice to be challenged at South Central,” said Vettrus. “Depending on the course, it took a lot of time and effort. It was definitely more rigorous.”

Peterson said being on your own and navigating your way through the college classes was the most difficult part of being a PSEO student. She lives in Waterville and is a student at Medford High School in Medford.

Peterson, 18, intends to major in business at Minnesota State.

“In my first year of taking PSEO, I was really unsure about what I wanted to major in,” she said. “But as I took a wide variety of courses, I was really interested in business. Especially after taking economics at South Central.

“I would totally suggest PSEO to anyone who is thinking about it,” Peterson said. “You get a sense of freedom you don’t get in high school. It’s worth the time and effort.”

“It has given me a lot of tools to use as I start the next chapter of my life,” Vettrus said. “I’ve met great instructors and figures who have really impacted my look on the future as well.”