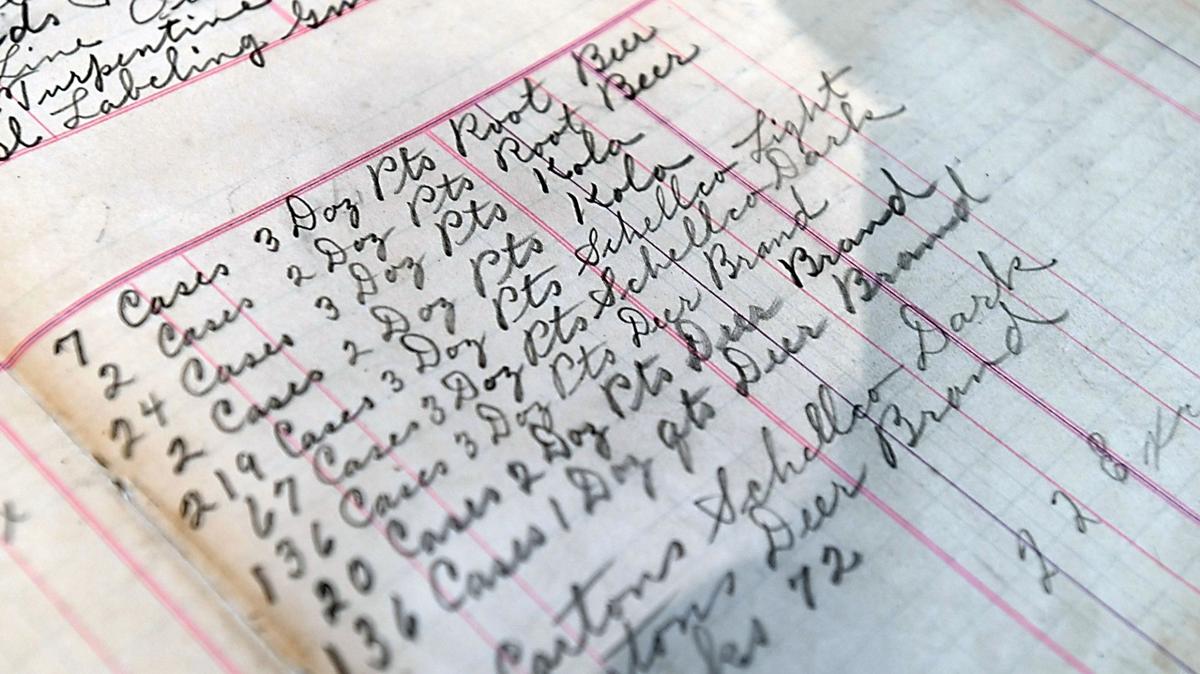 A ledger from the 1920s shows the inventory of non-alcoholic products Schell’s had on hand during Prohibition. 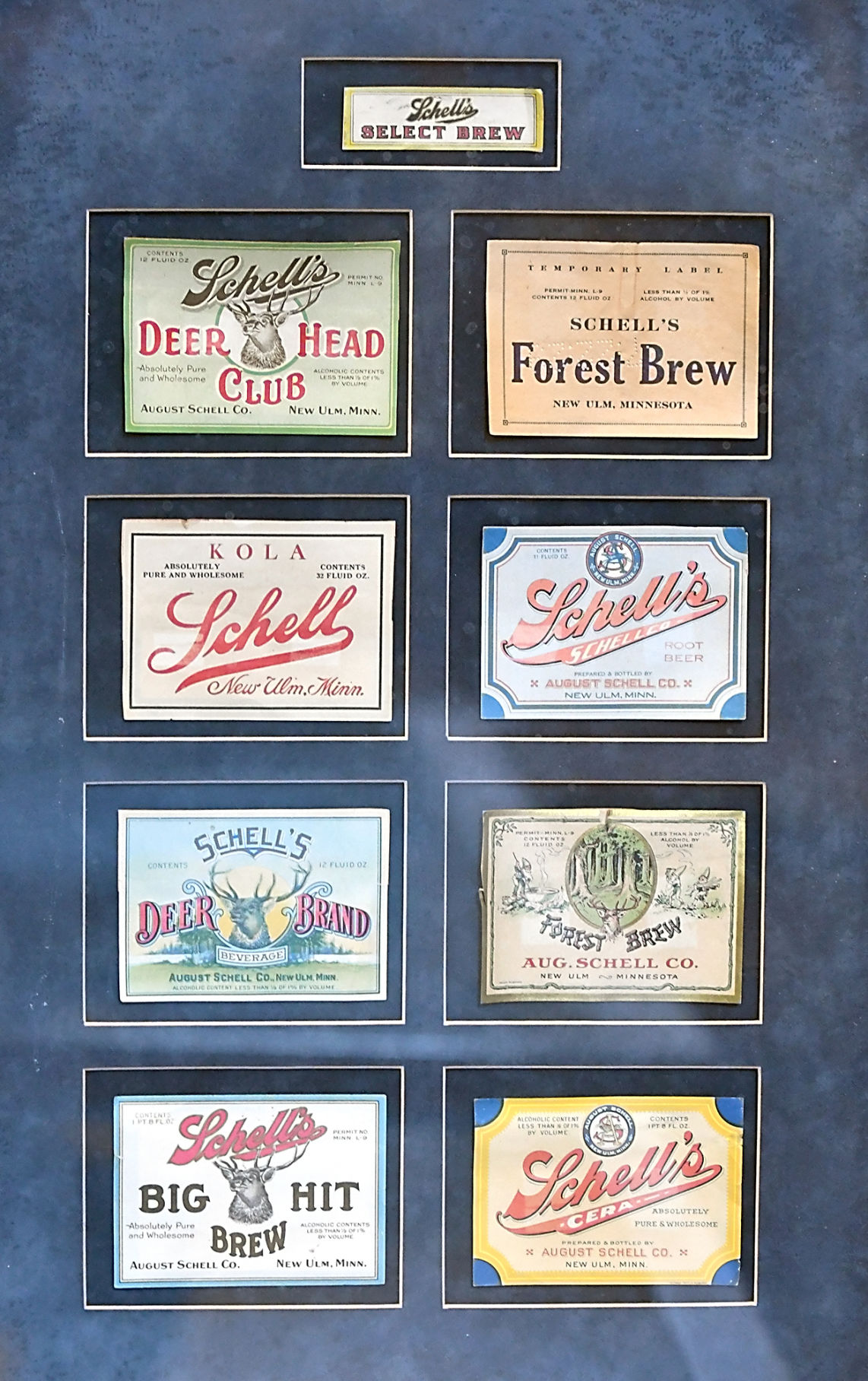 Labels from some of the “near beer” and soft drink products Schell’s produced during Prohibition. 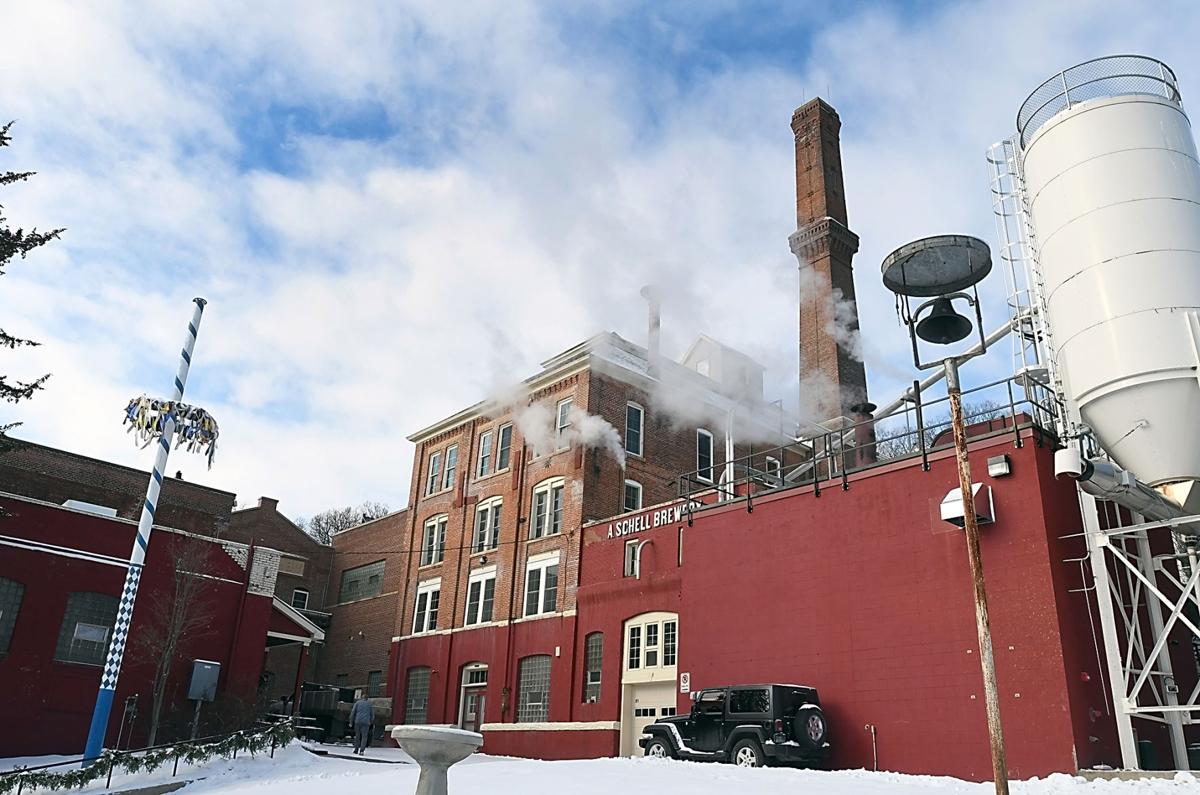 Ted Marti, president of August Schell Brewing Co. in New Ulm, explains how a ebulliometer was used to determine the alcohol content of beer during Prohibition. The device, on display in the brewery’s museum, compared the boiling points of beer and water to determine alcohol content, which had to be below 0.5%.

Photos by Pat Christman
1 of 3

A ledger from the 1920s shows the inventory of non-alcoholic products Schell’s had on hand during Prohibition.

Labels from some of the “near beer” and soft drink products Schell’s produced during Prohibition.

Most breweries in existence at the time did not survive Prohibition, which started 100 years ago this month and lasted for 13 years.

One of the few that did was the August Schell Brewing Co. in New Ulm, founded in 1860. It now counts itself as the second oldest family-owned brewery in the country.

While 1919 brought about the passage of the 18th Amendment to the Constitution, Prohibition didn’t begin until January 1920.

Although alcohol was made illegal, there was no lack of beer and liquor in the Mankato area during Prohibition. Bootleggers did a brisk business, often hiding stills in caves and crannies along the Minnesota River Valley.

Meanwhile, local law enforcement mostly turned a blind eye, with federal agents the main risk to moonshiners. And the bootlegging, coupled with the Depression that started in 1929, fostered a criminal element that thrived in the area, including in South Bend, which became a hotbed of outlaws, bootlegging and stories of visits by John Dillinger.

“It was not an easy time,” he said of the period when his grandfather, Al Marti, led the business. “We owned a lot of taverns and properties in small towns around here back then. We would sell those off.”

At that time breweries often owned taverns, which they leased to someone else to operate. “They’d get a favorable lease and the only beer they could tap was ours.”

During Prohibition, Schell’s brewed root beer. (Schell’s 1919 Root Beer, sold today, is a nod to the year Prohibition was approved.) They also brewed “near beer,” which was legal but couldn’t have more than 0.5% alcohol content. And the brewery cobbled together an income selling candy made by other companies and just about anything else they could think of to keep the doors open.

“New Ulm wasn’t too crazy about near beer. It didn’t taste very good unless you spiked it,” Marti said.

Marti said that while they made and sold near beer, there was plenty of strong beer on site all through Prohibition. That’s because the only way to make near beer was to start with strong beer and then go through one of various processes to reduce the alcohol level.

“We ferment it and then pumped it back in the kettle and boiled it off to get rid of the alcohol. So there was always higher alcohol beer in the basement, so I’m sure if anyone wanted a beer they went down and got one. But it didn’t get tapped or sold.”

Marti said federal agents routinely showed up to inspect the brewery to ensure compliance. Beer alcohol content was measured by boiling beer and water side by side. The time difference it took to boil the two liquids was used to measure alcohol content.

Marti said if the feds were hanging around longer than his grandfather thought reasonable, he helped nudge them on their way, at least in winter months. “The agents sat in the upstairs office. My grandpa had a valve he could turn and shut the heat off in there. I’m sure they got a laugh out of it.”

But, Marti said, Schell’s has always gotten along well with federal regulators. During Prohibition his grandpa often took the agents pheasant hunting when they were in town in the fall. “Which is illegal now, I’m sure. We always got along with the feds.”

Marti said that while the brewery couldn’t produce strong beer, there was no lack of alcohol of all kinds. “Especially in a German town,” he said. “They probably made their own beer at home. There were a fair number of stills around here. They’d hide them along the rivers. I suspect most of the police and sheriff knew where they were but weren’t pushing to hard to catch them.”

When Prohibition ended, Schell’s bought more equipment and quickly ramped up to profitability.

The other brewery in New Ulm, Hauenstein, which started in 1864, also made it through Prohibition. But like many smaller brewers, it ran into problems in the late 1960s as it couldn’t compete making the same style of beer as the big brewing companies. Hauenstein closed in 1969.

In Mankato, the Bierbauer Brewery was operating before Prohibition and shut down when it started. The brewery was reopened after Prohibition as Mankato Brewing Co. but closed for good in 1969, said Shelley Harrison of the Blue Earth County Historical Society.

She said in the years prior to the closing they were selling only about 10% of their beer to locals, not enough to support them. “If the craft beer boom of today was happening back then, they probably would have survived.”

Like everywhere else in the country, alcohol still flowed freely, albeit covertly, in the Mankato region. And while Prohibition was boosting the fortunes of big-name gangsters, lower-level outlaws were also doing well, with many of them hanging out or hiding out in South Bend, a line of homes and businesses along the old trail to Minneopa Park.

Belle Born may have been the most famous of local bootleggers and outlaws, eventually earning her the name Shady Lady of South Bend. Moonshiners would frequently make deliveries to her house, according to Steve Uleman, writing in the Blue Earth County Historian newsletter in 2010.

The liquor was taken to her cellar, and from there moved back through a tunnel to a cave in the hillside behind the house. Belle stored the moonshine in the cave until she could move it.

One of the main drop-off points was across Highway 169 and down a dirt road, which went under the railroad trestle and from there to the old steamboat landing on to the banks of the Minnesota River. Someone across the river would be signaled to by flashlight and cross to get the illicit cargo.

Born was also caught up in more serious and high-profile crimes and her home was a place for gangsters from St. Paul or elsewhere to visit or hide out. One story has John Dillinger being there, but the veracity of the story is uncertain.

Uleman wrote that Lynn Thro owned a stable of fine race horses near LeHillier, but had a lot of liquor stored in his stables as well. Locals joked that whenever a Thro horse trailer came down the hill, chances were there were no horses in them. Thro pleaded guilty to violations of Minnesota liquor laws in federal court in 1929 and paid a fine of $350.

Until the sheriff was forced to close it down due to complaints, a few Madison Lake residents even operated a floating dance hall and speakeasy on Madison Lake.

Danelle Erickson, of the Blue Earth County Historical Society, said there were plenty of stories published in The Free Press detailing the shenanigans going on during Prohibition.

One man who delivered gasoline to farmsteads around the country built a partition in his tank that allowed him to also deliver moonshine.

“The sheriff was accused of turning a blind eye to a guy from St. Paul coming down and smuggling alcohol into the jail.” The local jail, it was said, was holding several Twin Cities bootleggers at the time.

And there was the great carp caper of 1921. A sportsman had killed a large carp that had attacked him. He delivered it to authorities who examined it and found it had bloodshot eyes and a stomach full of corn mash, a byproduct of moonshining.

One day federal agents simultaneously raided “soda parlors” in Mankato, including Mettler’s and the Oleander. While the establishments were supposed to be selling only soda pop and near beer, hard liquor was found at all of them, and more at private residences of the owners and employees. By the end of the day, 22 arrests were made and more arrests came the next day in Mankato and area towns.

Every cot in the county jail was filled.