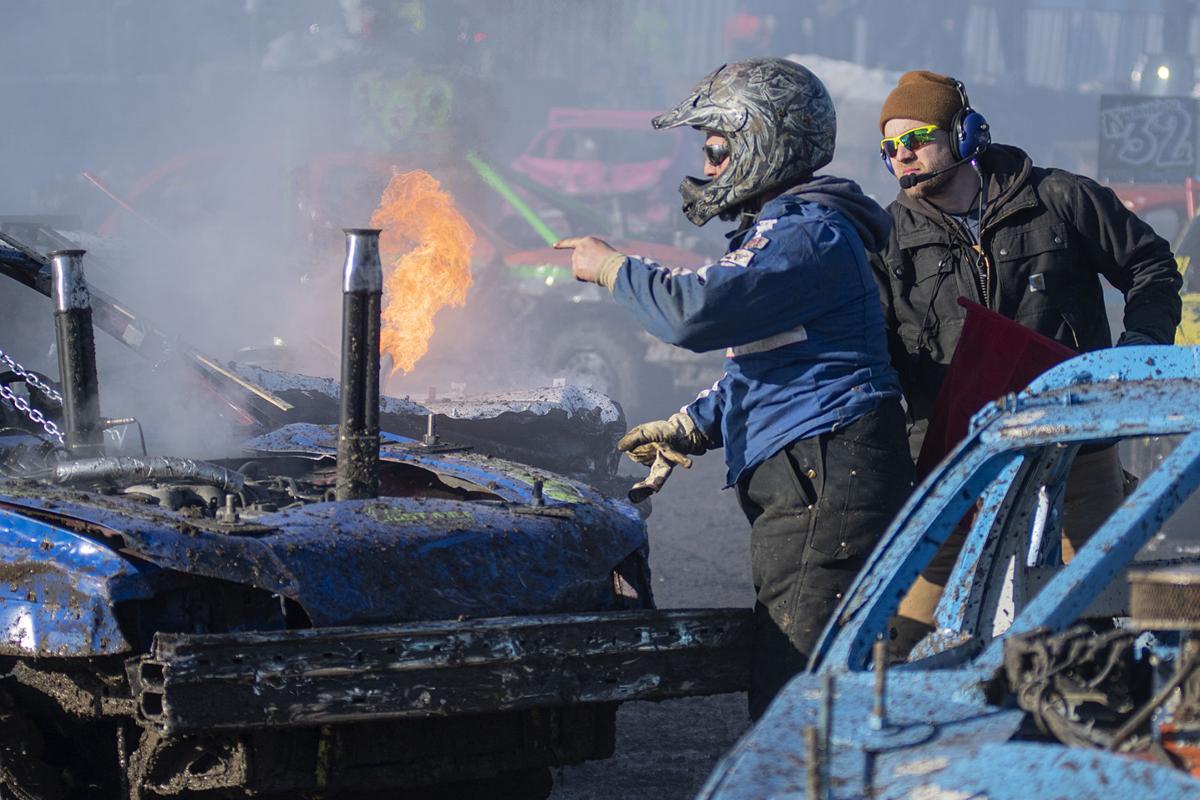 Tensions flare between drivers in the compact car division of the 10th annual Winter Slam demolition derby at the Nicollet County Fairgrounds on Saturday. 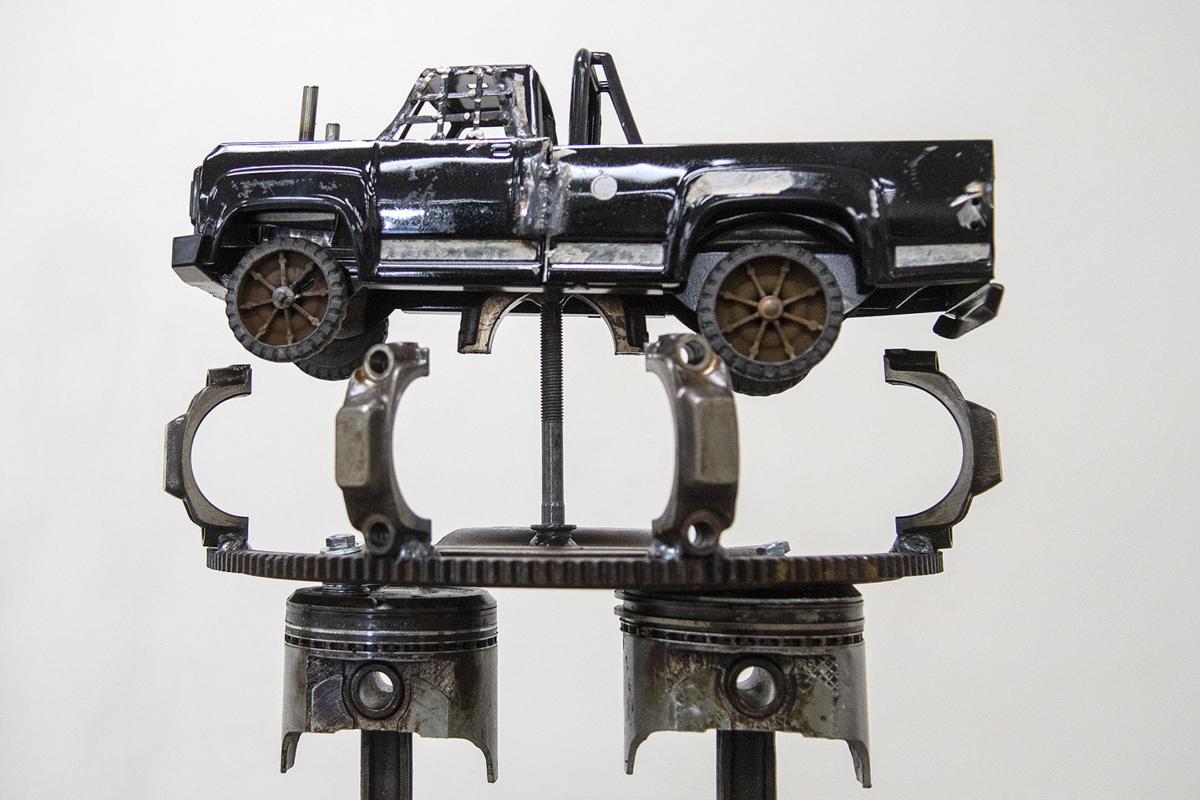 The top portion of the trophy given to the winner of the truck division of the Winter Slam demolition derby, made by Terry Evans. Evans said it takes him about four to five hours to make one of his trophies.

Terry Evans from Osage, Iowa, holds up one of the trophies he made for the 10th annual Winter Slam demolition derby held in St. Peter. Evans said he makes trophies for various demolition derbies nearly every weekend during the summer.

Tensions flare between drivers in the compact car division of the 10th annual Winter Slam demolition derby at the Nicollet County Fairgrounds on Saturday.

The top portion of the trophy given to the winner of the truck division of the Winter Slam demolition derby, made by Terry Evans. Evans said it takes him about four to five hours to make one of his trophies.

ST. PETER — Demolition derbies are often a family affair, with those who love tinkering with cars heading out in any weather to participate.

“Some families go fishing, some smash cars,” said Steve Hauschildt, who was with his brother and other family members taking part in the the 10th annual Winterslam, which drew a large crowd to the Nicollet County fairgrounds on a chilly Saturday afternoon. About 140 entrants took part in the event, part of St. Peter’s Winterfest activities.

“Many of these guys are hard core. They used to do racing and this is all that’s really left. It’s a race of it’s own kind.”

His brother, Dale, and family members were scrambling to try to fix the Monte Carlo they brought to the derby, a car that wouldn’t start. But they also brought another vehicle along to enter in the compact car division if needed. “The cold makes it tougher and a lot of the engine parts are removed so more cold air gets sucked into them,” Steve said.

Dale, of Millville in southeastern Minnesota, said he travels to about 10 derbies a year since he got into the sport in 1993. He’s starting to ease out of driving but his daughter is interested in doing it when she gets her license, and his niece also drives in derbies.

He said other than the challenge of working on vehicles in the cold temps, winter derbies aren’t a lot different than the ones commonly seen at county fairs in the summer, other than a lack of muddy arenas. “The main thing is the ground is a lot harder.”

He was driving in the compact car division, and returning as last year’s winner of the “hardest hitter” in his division. The award goes to the driver in each division deemed the most aggressive.

The honor for that award is a large, unique trophy of welded-together car parts.

For the past decade, Terry Evans of Iowa has built the trophies. This year, in honor of the 10th anniversary, he made them even bigger than normal, nearly five feet tall.

“The first trophy I made was for a show in Winterset, Iowa, and then I had promoters who wanted some. In June, July and August I’m busy making trophies for derbies just about every weekend,” Evans said.

A welder by trade, Evans has been around cars all his life. “My dad owned a body shop. We were always working on cars. I’d rather work on cars on my own than take it to a shop. My dad used to do derbies and my brother does them.”

He finds car parts for his creations from derby drivers and other people he knows. “I use mostly engine parts, gears from transmissions, pistons. I look for things to make it stand out. None are the same.”

But next year the derby will have to find a new source for the unique trophies as Evans is retiring from making them.

One of the organizers of the event, Randy Mosloski of Mapleton, said drivers came not just from Minnesota but from Montana, South Dakota, Iowa, Missouri, Illinois and Wisconsin.

He and partners Jeremy Ertman, of South Dakota, and Joey Sanders from Elmore, have been putting on demolition derbies for years.

They started the winter derby in Blue Earth but then moved it to the Garden City county fairgrounds, but then outgrew that site as well and moved it to St. Peter.

Mosloski said that while there is still a lot of interest among drivers and spectators, demolition derbies are getting more challenging to put on.

“The financial backing for all the payouts and the cost of putting it on is high. If you don’t have the financial support from backers it’s hard to make it work. A lot of the smaller fairs are cutting back on them.”

He said the cost to drivers to get and prepare a car is also getting more costly. Many favor the heavy, full-size cars from the 1960s and 1970s. “It’s hard to find those cars that aren’t rusted out in Minnesota and they’re costly to buy if you do,” Mosloski said.

He said people often buy some 1980s cars for a few hundred bucks, but they usually have to reinforce the frame to stand up to the crashes.