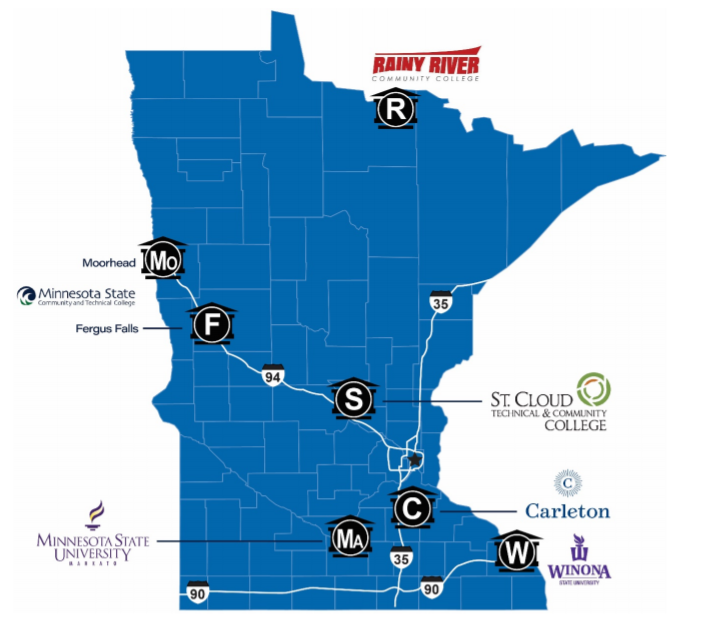 About 60,000 students at seven campuses throughout Minnesota participated in a study aimed at reducing underage alcohol use, high-risk drinking and high-risk marijuana use.

Through an array of strategies designed to reduce substance abuse among students, Minnesota State University was one of five colleges in the state to significantly reduce underage alcohol use the last half-decade as part of a grant program.

The Mankato college was the largest of seven campuses to participate in a statewide substance-use-reduction initiative, which included 60,000 students and was funded by a federal Partnerships for Success grant.

A study earlier this year assessed the schools’ progress and found that, since the program’s onset in 2015, five of seven campuses have decreased underage alcohol use by at least 5%. Two campuses, not including MSU, also decreased marijuana use by at least the same margin.

National College Health Assessment surveys of more than 500 MSU students showed that self-reported alcohol use “within the last 30 days” fell among students from 70.6% drinking in 2018 to 69.1% drinking in 2019, the most recent year data is available.

Students in residence halls and first-year students were categorized as the college’s high-risk population, Schuette said.

“When they come to college, oftentimes it’s their first time with a lot of independence,” she said. “Students maybe have never had an experience with alcohol before, they’re not aware of what their limits might be, and they’re under a lot of peer pressure.”

With the Mankato City Council’s approval, MSU also worked with the city’s liquor stores to require that employees be trained how to spot a fake ID. Training programs took place between 2017 and 2018, Schuette said.

The statewide study, published in January by three researchers at the Wilder Foundation in St. Paul and shared recently by the Minnesota Department of Human Services, also made key findings regarding enhanced substance use among certain groups:

• Student-athletes are more likely to use alcohol than non-athletes because of heightened pressure to perform academically and athletically, as well as a longing to fit in with teammates. Thirty-six percent of student-athletes drink weekly and 42% binge drink, a 2017 NCAA survey of the group found.

• White students, especially men, use alcohol and marijuana at the highest rates. Data from a 2019 College Student Health Survey found that 58% of white respondents engaged in underage drinking, 27% partook in high-risk drinking and 22% used marijuana.

• Black, Indigenous and people of color may face a higher risk of substance use because of discrimination and racism. They are also more likely to experience a drug-related arrest and less likely to receive interventions for substance abuse, the authors write.

• Despite limited data on substance use among LGBTQ students, lesbian and bisexual women seem to be more likely to use alcohol and marijuana than their heterosexual counterparts. Nearly two-thirds of adults ages 18-25 who identify as lesbian, gay or bisexual reported using alcohol in the past month in a 2020 Substance Abuse and Mental Health Services Administration study, compared with 55% of the general U.S. population in that age group. Regarding marijuana use, the same comparison shows a third of lesbian, gay or bisexual respondents having used marijuana in the past month compared with 22% in the general population.

Students who have had mental health challenges, diagnosed or not, in the past year of their lives are more likely to use alcohol or drugs to self-medicate or cope, the authors say.

Two-thirds of Minnesota college students reported in 2018 that they had experienced a “stressor,” such as a roommate conflict, a death of someone close to them or excessive debt. The more stressors a student endures, the more likely it is he or she will engage in high-risk drinking or marijuana use.

“College brings new stressors. A majority of students are likely to be experiencing stress, anxiety or depression,” the researchers write. “Thus, universal programs that address the mental and physical well-being of all college students can help students cope with the challenges of college.”

Most of the seven funded campuses began implementing substance abuse prevention strategies in fall 2016. The state’s funding lasted through 2020, though the pandemic disrupted many colleges’ execution of strategies during the 2019-20 academic year.

Schuette said the Alcohol Wise program is too expensive for the university to continue without additional grant money, which stopped flowing at the end of last year. First-year students now must complete a similar but pared-down online module called Alcohol 101.

The school to achieve the largest reductions in substance use was Rainy River Community College, in northern Minnesota on the Canadian border. Over five years, underage alcohol use dropped 19% at the college, while marijuana use among young adults fell 11%.

Winona State University was the second largest college involved, at an enrollment of nearly 8,000.

The full study, authored by Jennifer Valorose, Melissa Adolfson and Melissa Serafin, can be viewed online at: https://www.wilder.org/sites/default/files/imports/PFS_Final_Report_1-21.pdf.