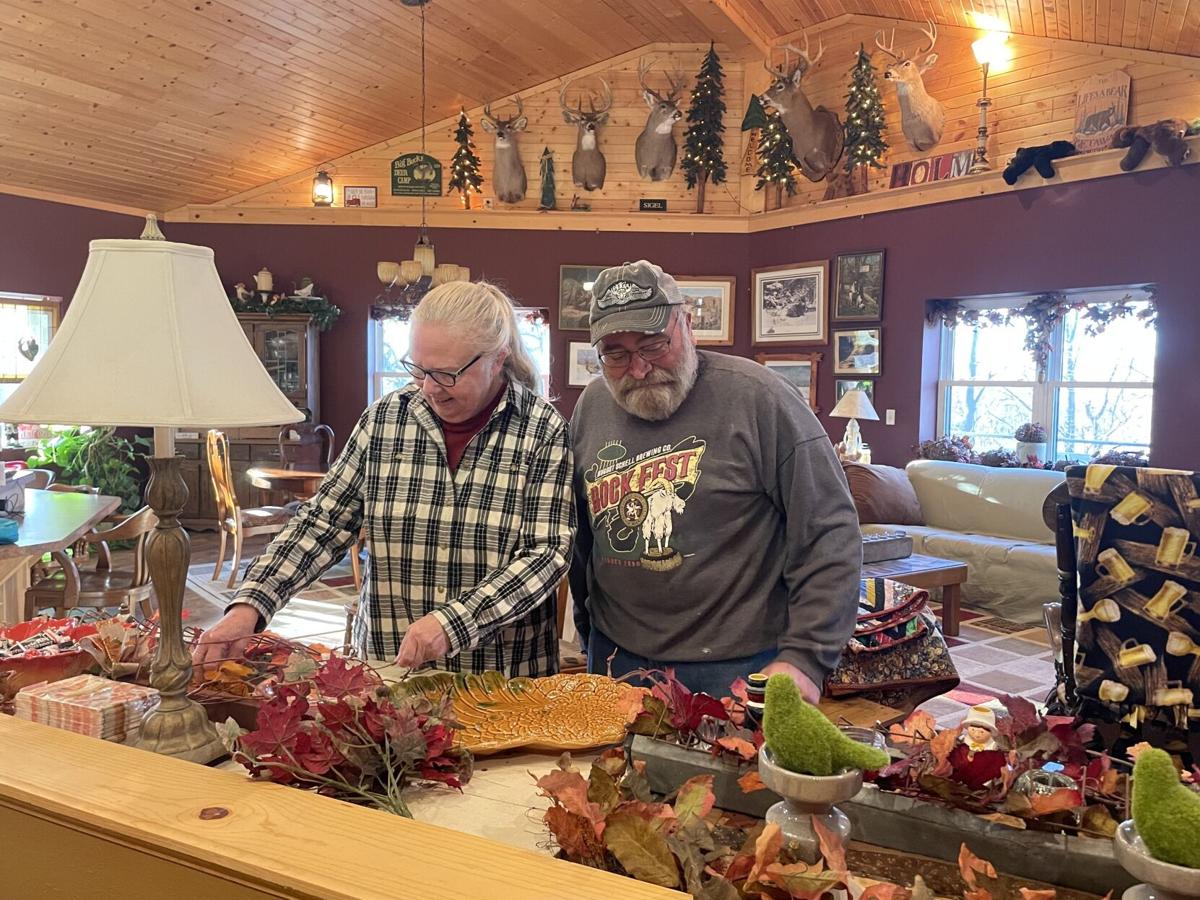 Vickie and Larry Holm adjust fall decorations ahead of the Thanksgiving feast they’ll host this year. Having built a larger house to carry on the tradition from Larry’s parents, the couple has faced setbacks to the holiday in the form of a cancer diagnosis and a pandemic. 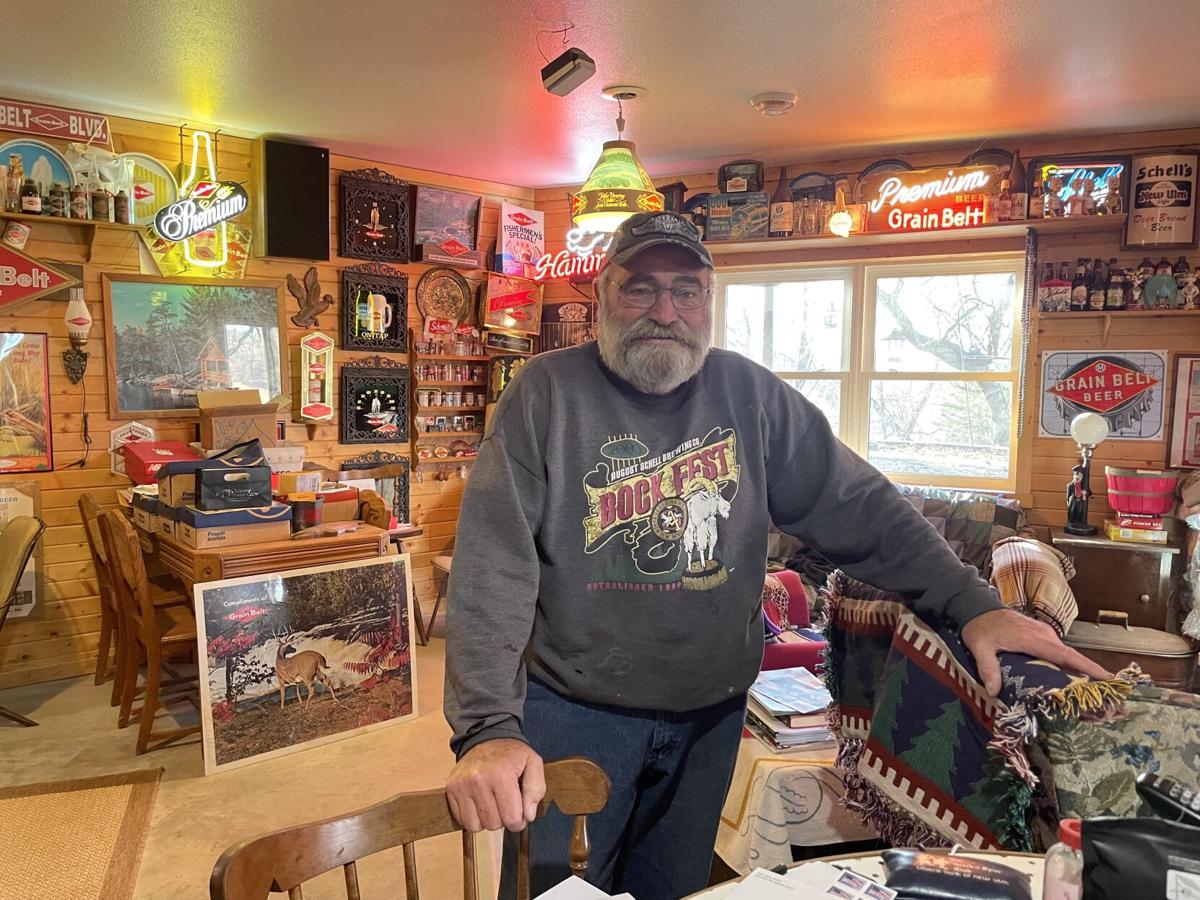 Larry Holm worked for the Minnesota Department of Transportation for decades before his retirement in the mid-2000s. He has since become a regular at auctions where he collects beer memorabilia. 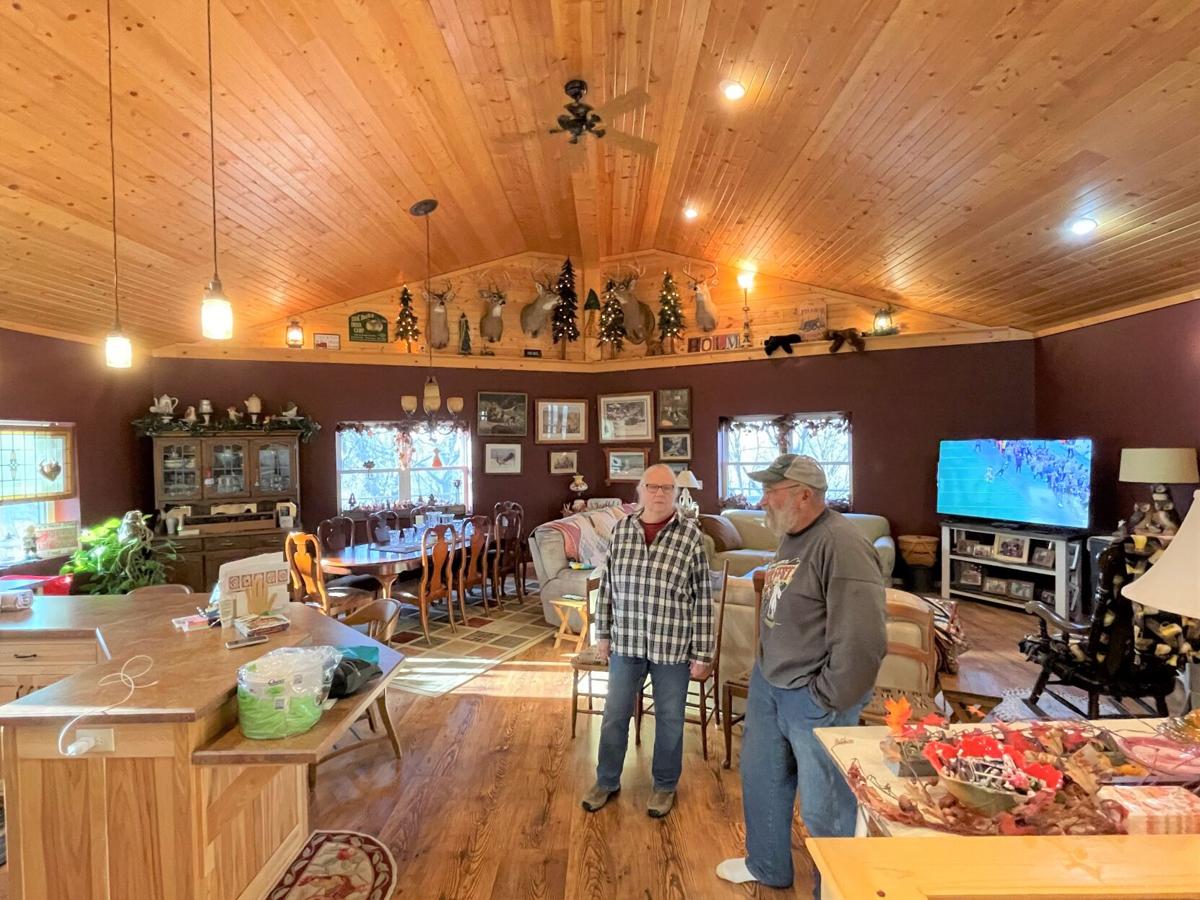 At the top of a wooded hillside leading down to the Cottonwood River, Vickie and Larry Holm built a large house with an open-floor plan to replace the modest one in town where they had raised three sons. 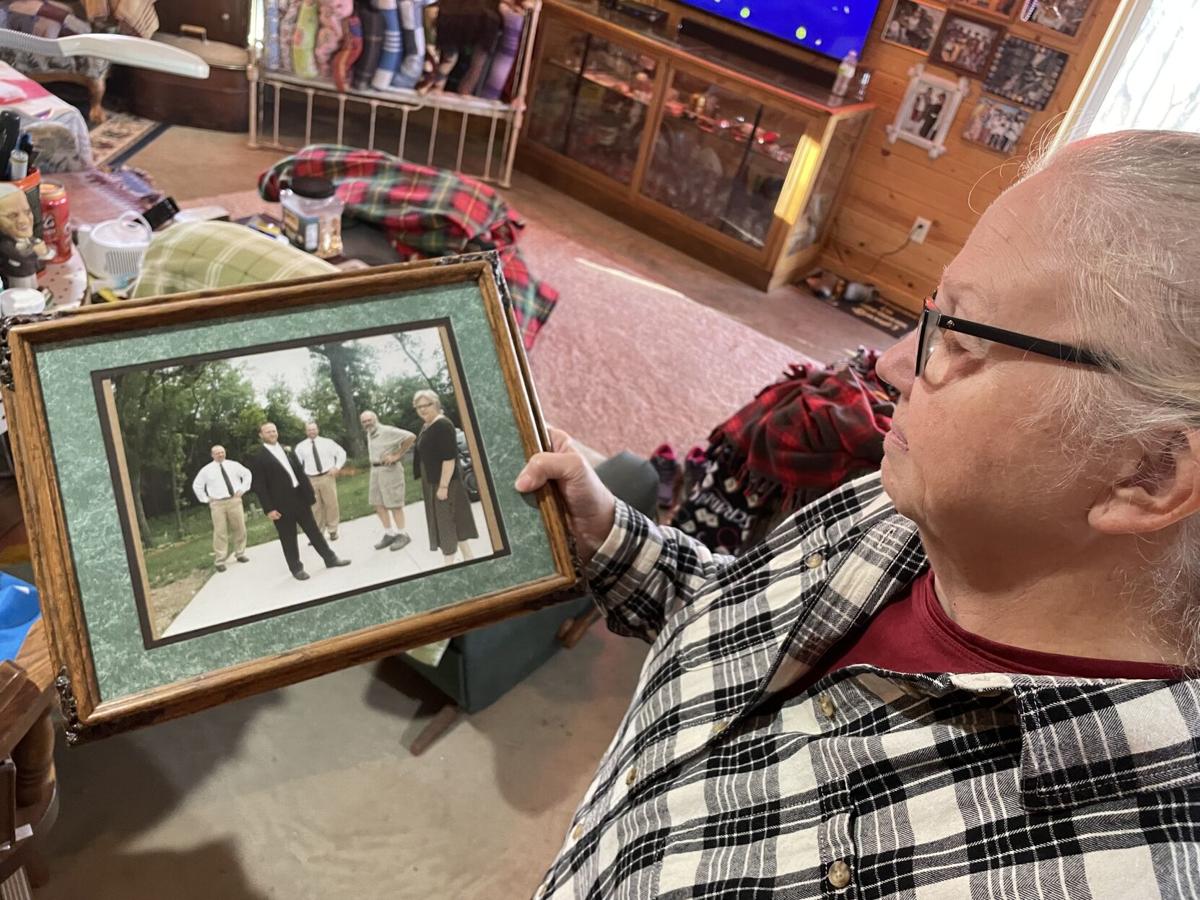 Vickie Holm holds a photo from her son Willie’s wedding, which was hosted outside of the couple’s house in June 2010. Less than a year before, Larry Holm had been diagnosed with multiple myeloma.

This year Larry Holm stands about 5-foot-8. But when hosting Thanksgiving became a tradition for him, he was 5 inches taller.

Before the fall of 2009, his burly 245-pound body remained strong though he was well into his 50s. A booming voice and commanding personality made the father of three sons the focal point among dozens of family members who came to his spacious home out in the country.

And for a holiday that reveres food, he has long been “The Cook.”

Within a year of that fall, however, Holm had become frail. He felt suddenly old and weak. To this day, at age 66, he stands with shoulders slightly hunched and must walk slowly to avoid pain.

“I got at it so late that it ate a lot of my back,” he said of his disease. “So I got like five or six vertebrae that were slowly just crushed together, and I shrunk right down.”

His diagnosis was late-stage multiple myeloma, a rare cancer found in the bone marrow that makes bodies more susceptible to infection and weakens bones by disrupting their natural regenerative process.

Doctors told him he had two years to live.

But for the past decade, he has survived. He now feels less pain than he has throughout his fight with cancer. More than three dozen relatives have annually crowded into the family’s main room and are able to hear the same booming voice, look into the same attentive blue eyes.

His continued presence at holiday gatherings was abruptly taken away from family members last fall, however. With several nurses in the family liable to COVID-19 exposure and an immunocompromised older man in the group, they agreed a reunion was too perilous.

A sister-in-law ate with her small extended family, calling the day “a shadow of what it normally is.” Holm’s son ordered Hy-Vee takeout with his wife and daughter. Holm and his wife didn’t get to host any of their increasing number of grandchildren.

He came to realize, he said, how losing it once could forever alter a tradition.

The 45 people, the vast majority of them fully vaccinated, planning to reconvene at Holm’s house this Thanksgiving know the significance lies far beyond the timeframe of the pandemic.

‘He was suffering, but he cooked’

A few years before the diagnosis, Holm and his wife, Vickie, had found a tract of land along the Cottonwood River outside of New Ulm on which they wished to build.

At the top of a wooded hillside leading down to the water, surrounded by fields farmed by Holm’s brother and other family, they built a large house to replace the modest one in town where they had raised three sons.

Their vision was to host dozens of family members for holidays.

By 2007 they saw people crowd into the living room, its high wooden ceilings coupled with antlered deer trophies on the wall evoke the feeling of a secluded cabin. The open-floor plan means the kitchen borders the room’s seating area. Whether they sat on the couches near the TV or stood near the dining tables, people felt Holm’s presence as he prepared for the feast.

His wife, Vickie Holm, who worked as a nurse until her retirement this year, said three words about her husband’s decision to cook following the cancer diagnosis before her throat chokes her voice.

The feast that year felt like an ending, she said. She had been unfamiliar with multiple myeloma before the diagnosis but knew Holm was enduring what he calls indescribable pain.

“He was suffering, but he cooked,” she said. “He made everything, and then he went downstairs and sat down.”

Everybody saw it and knew how dire Larry’s situation was, said the couple’s middle son, Willie. His father’s presence, through size and sound, normally loomed large in a room.

By depleting his bone tissue, the cancer had also sapped the man of his robust personality.

“But we were there to help.”

A risk worth taking

In lieu of last year’s Thanksgiving celebration, Sue Jensen needed some way to show the Holms and her own immediate family that she missed them. So she sat down alone in her living room and filmed herself singing a hymn.

Jensen, whose husband is the brother of Vickie Holm, used to spend the holiday eating a meal with her smaller immediate family of three children and her spouse. After the Holms moved into a larger space, Vickie invited her side to join their dinner.

She, her husband and their children, now in their 20s and 30s, have made the trip to the countryside ever since.

Feeling forlorn because the pandemic would prevent the 2020 gathering, she decided to re-create one of her favorite holiday traditions.

Standing in the main room together before the feast, the dozens of family members always sing a doxology to bless their food. This time it was only her voice, and anyone who heard it was only listening to the video she shared with the whole family.

“It was just a way for us to remember that this is what we’re missing and it is sad ... but we still are family, of course, and we’ll look forward to the next gathering when we can get together,” she said. “At that time we had no idea when that would be.”

She needed three takes to finish the video without choking up.

In a video she shared, the song sounds plaintive. When she finishes singing, she says, “I miss you,” a voice that had been rich beginning to croak, “and love you all.”

“I was hoping they didn’t think I was crazy,” she added, “but I’m sure that they knew my heart.”

“It’s just the thing about trying to keep everybody together. Because once you start to lose that connection with your family, then it’s hard to get it back."

Though COVID’s spread in Minnesota as of late has increased to a higher per-capita level than anywhere else in the nation, Jensen said any pandemic anxiety she feels is overpowered by the excitement of reuniting with family. The availability of vaccinations makes gathering worth the risk for the family.

It is a family with several nurses who have touted the need to follow public health guidelines and receive vaccinations. Willie’s wife is a teacher who has been at the forefront of fraught conversations about pandemic restrictions, and she has not backed down from her support of masking and vaccines.

Larry Holm estimates that of all the eligible people gathering, all but one are fully vaccinated.

As long as The Cook is in their presence, Jensen said, every opportunity to celebrate the holiday feels precious.

“Mostly everyone that’s there chooses not to do a second meal somewhere else,” she said. “They usually don’t go to the in-laws, if they can help it, because this is really special and important.”

Only family are ‘your people’

“Once you get really sick and somebody tells you that you’re gonna die,” Larry Holm said, “you know, it’s a shitty feeling.”

But then, in his case, you don’t die. Having realized how promptly he could lose a tradition he began over a decade ago, one that is a continuation of the gatherings his parents had hosted until their deaths near the turn of the century, he now wants more than anything to be with his people every year.

This year among them he will have a new marriage to learn about — Jensen’s youngest daughter recently became a wife. He will hear conversation about the family deer hunt that happened earlier in November. There will be talk of how on Sunday the Vikings upset the Packers.

“It’s just the thing about trying to keep everybody together. Because once you start to lose that connection with your family, then it’s hard to get it back,” he said.

“And, you know, friends and all that stuff are fine,” he added, “but they’re never really your people. Your people are always just gonna be your family.”

He learned that while he was at his sickest, at a hospital in the Twin Cities for weeks. Some of his closest friends did visit, but he most remembers the presence of his family.

Friends or acquaintances didn’t know what to say or do in the face of his grim outlook, he said, so he grew apart from some of them.

After the diagnosis, Willie said his father was initially more short-tempered and irascible than usual, so many who knew him gave him space. But really he needed them to be closer.

Reminders of how unlikely his survival and freedom from ongoing intense pain are have been easy to find. A number of people about Holm’s age whom he knew from his years living in New Ulm have died from myeloma.

He jokes that colleagues he met over decades working for the Minnesota Department of Transportation, from which he retired in the mid-2000s, will be shocked to find out he is alive if they read this story.

When Willie was diagnosed with colon cancer in 2016, an ailment from which he promptly recovered after a surgery, he compared his own situation to his father’s and felt humbled.

He rarely talks about his bout with cancer now. But the experience of it coinciding with his father’s makes every 80-mile drive to the big house from Chaska, where he now lives with his wife and young daughter, deeply meaningful.

For him, returning home is simple. Everyone wants to be together. He knows, however, there are many families for whom bickering over money or relationships has complicated the aim to see each other.

“Life doesn’t need to be hard,” he said of family disagreements. “It’s been hard enough. Our family’s pretty tight.”

Like every year, Willie expects Thursday he will sit with his two brothers and father, and, because each man has inherited some degree of his father’s dominant presence, it will get loud.

He added: “I wouldn’t have it any other way.”