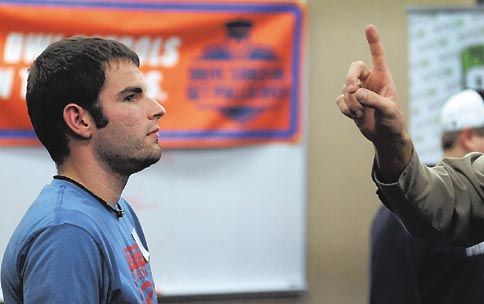 Luke Werner, takes a horizontal gaze nystagmus test during a drinking demonstration hosted by the State Patrol Thursday. The test checks for eye staggering, which can't be controlled by the person taking the test, to reveal intoxication. 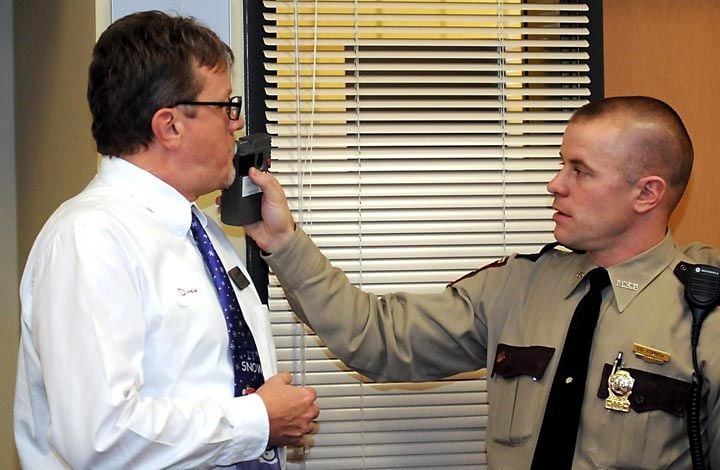 Luke Werner, takes a horizontal gaze nystagmus test during a drinking demonstration hosted by the State Patrol Thursday. The test checks for eye staggering, which can't be controlled by the person taking the test, to reveal intoxication.

Luke Werner worked his way through about seven mixed drinks in about 90 minutes before he stepped up to Trooper Gabe Cornish's breathalyzer and blew as hard as he could.

The 155-pound Radio Mankato intern was feeling good and having fun, but he was still sober enough to know it wouldn't be a good idea to get into a car and drive home. Even though most of those drinks had double shots, Werner, at a blood-alcohol concentration of .09, was still very close to the legal limit of .08 for driving.

So when people complain about being arrested when they're "just barely over the limit," they're actually far more impaired than they realize, Cornish said. Reaction times are already slowing at a .03 and judgment fades significantly at .05, he said. By the time you reach the legal limit, your vision is blurred and your coordination is slipping.

And those who are still in the bar at that point, not even thinking about going home, are running the risk of losing the judgment needed to make sure they get a sober ride home.

"They become numb to the reality of their ability to drive," Cornish said.

Werner joined Blue Earth County Commissioner Drew Campbell and several radio personalities Thursday in a controlled drinking event sponsored by the State Patrol. They downed mixed drinks to show others how judgment slips, and the ability to drive fades, as the shots multiply.

The goal was to use someone other than law enforcement officers to make that point as a new holiday enhanced DWI enforcement effort gets started this month.

It was about a week ago when Cornish stopped an SUV full of six college students who went out for a few drinks to celebrate a 21st birthday. A few drinks turned into several and the driver was arrested for drunken driving.

The group told Cornish the original plan was to take a cab home, but the plan changed at the end of the night. The driver decided driving a mile or two wouldn't be too difficult. He only made it a few blocks before Cornish realized a stop would be necessary. The driver's friends ended up taking a cab home anyway.

"They probably spent 20 or 30 dollars each buying drinks at the bar, but they didn't spend the $2 it would have cost them to get a cab home," Cornish said. "Any officer will tell you, Mankato or Blue Earth County, it's amazing how many times a bus or a cab goes by us while we're making an arrest."

Campbell, who said he was feeling pretty good after downing five double screwdrivers, said he never goes out for more than one or two beers or glasses of wine without making plans for a sober ride home.

"Call a friend or call me, I'm serious," Campbell said. "I'd rather get a person home, or make arrangements to get them home, than read about them in the paper."

December tends to be a busy month for DWIs because old friends are getting together, businesses are hosting holiday parties and families are gathering.