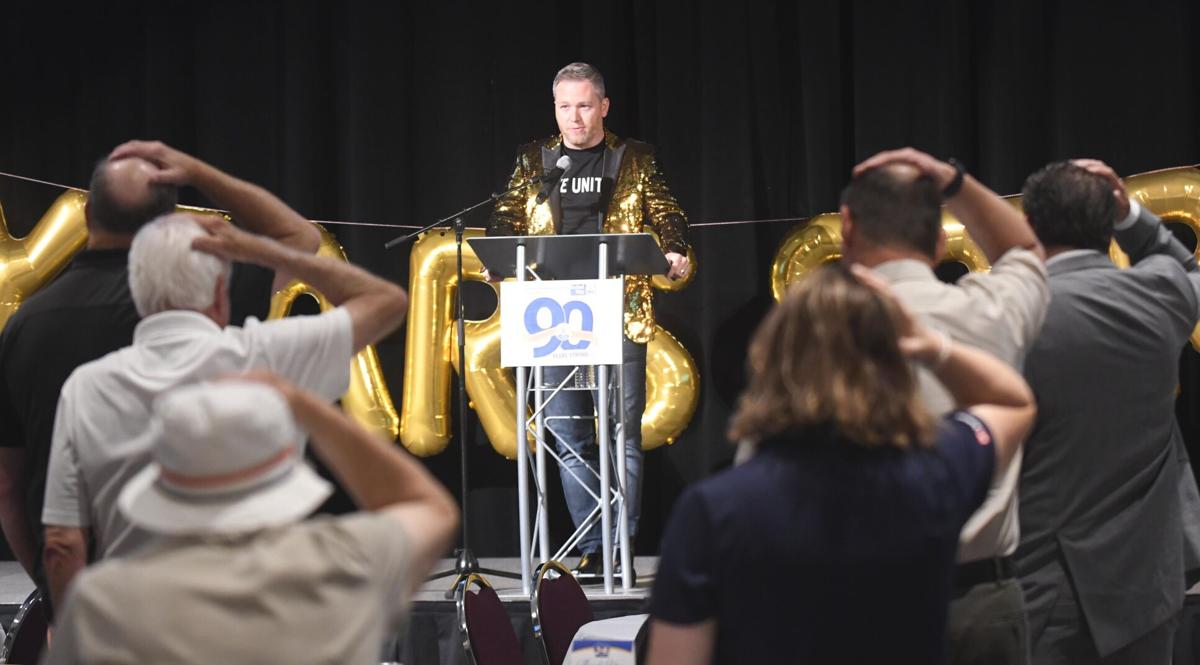 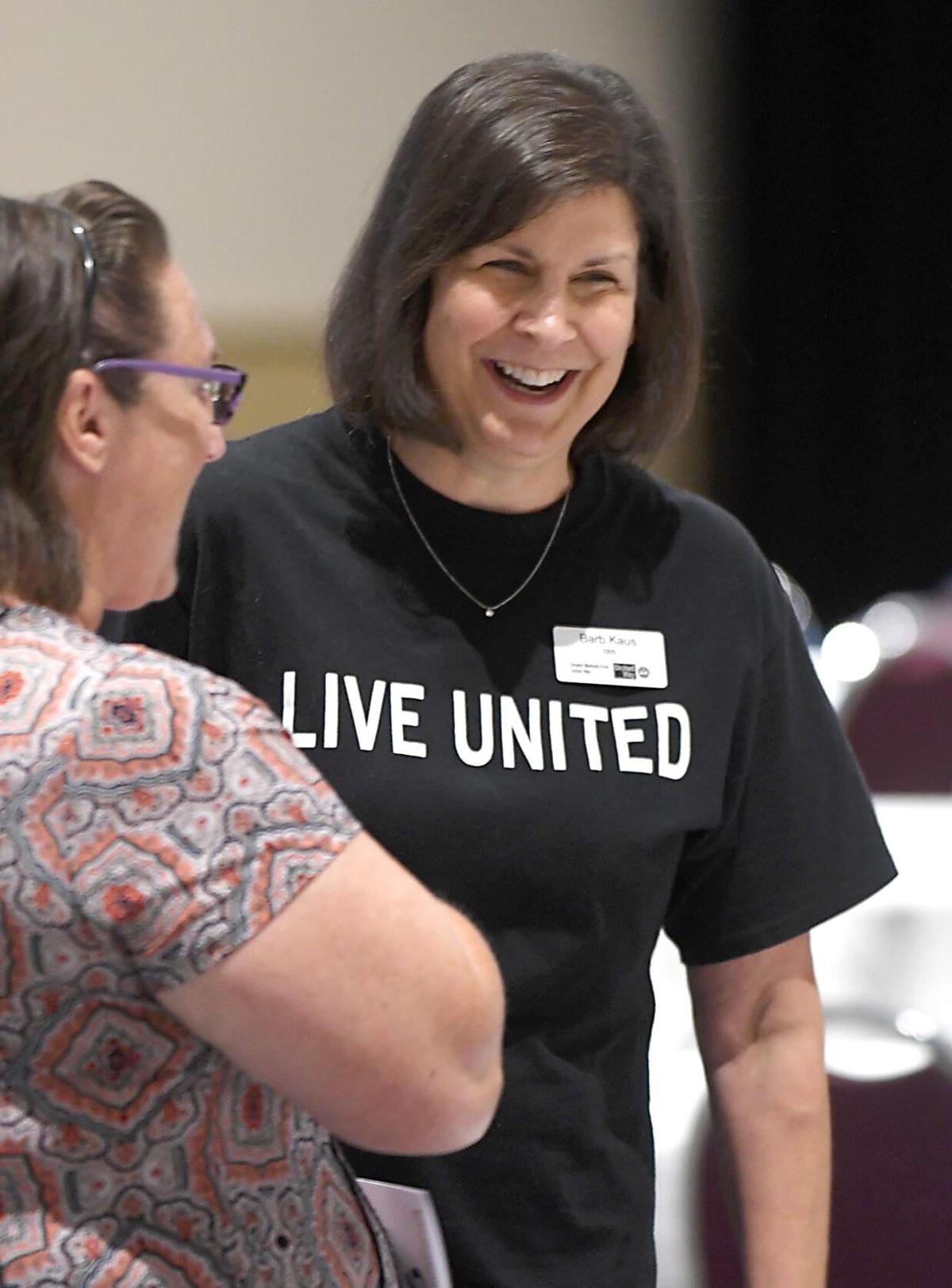 Greater Mankato Area United Way CEO Barb Kaus laughs while talking to an attendee Tuesday at the nonprofit’s 2022 campaign kickoff. The nonprofit is celebrating 90 years in Mankato this year and has set a $2.06 million campaign fundraising goal for 2022.

It adds up to more than $66 million raised over 90 years.

United Way leaders hope to again meet their fundraising goal of $2.06 million for 2022, which started with a campaign kickoff and 90th anniversary celebration event Tuesday.

After recognizing partner agencies, current and past board members, donors and volunteers at the event, CEO Barb Kaus said her heart was overflowing with gratitude. While every fundraising campaign matters to agencies in need of funding support, the 2022 campaign could take on extra significance due to the COVID-19 pandemic’s lingering impact.

“Our campaign is more important than ever because this year we have the fallout of the pandemic,” Kaus said. “Last year we were all trying to survive and pivot and adapt to what we needed to do. Now we’re seeing a lot of the negative results of the pandemic.”

About 200 nonprofits, including United Ways elsewhere in the state, closed during the pandemic. Keeping nonprofits up and running isn’t easy under normal circumstances, making the United Way’s presence in Mankato for 90 years stand out even more.

It started out as the Community Chest in 1931 during the Great Depression. William Schultz, a county board chair at the time, came to a Mankato City Council meeting in late 1930 to call for an administered fund to help people experiencing unemployment.

“The heart of Mankato is good, but we need a proper administrative force to carry out relief work,” said Schultz, according to a Free Press article from Nov. 3, 1930.

The idea was to limit overlapping relief work and have one agency organize and administer funding. Campaigns gradually grew over the years in both fundraising amounts and durations.

Free Press articles compiled by the Blue Earth County Historical Society show the goal grew from $6,000 in 1931 to $12,000 in 1941. The Boy Scouts organization was among the early recipients, a partnership existing to this day.

Twin Valley Council Boy Scouts of America is one of the 40 agencies and 59 programs set to receive funding from the 2022 campaign. Because local councils are tasked with raising money for local projects, District Executive Liz Paul said the United Way’s funding is a huge help.

“It helps us keep our camps open and run programs to enrich and support our Scouts and volunteers,” she said.

Community Chest became the United Fund in 1956. From there, the nonprofit adopted its current Greater Mankato Area United Way name in 1974.

Denny Dotson, longtime president of Dotson Iron Castings, started getting involved with the United Way a little before the last name change. He remembers returning to Mankato after serving in the Navy in the early 1970s and seeing United Way’s campaign rallies come to the company.

It was the start of his roughly 50 years of support and involvement with the nonprofit, from being on vetting committees to hosting rallies to serving on the board of directors.

Vetting processes, where committee members visit nonprofits to hear their needs and determine where funding is most needed, were and remain rigorous, Dotson said.

“It’s a real serious vetting process,” he said. “You can be confident the money being spent by the United Way is being spent in an absolutely superb way.”

Trust in where the donations go is one of the reasons the nonprofit has been around so long, he added.

“Someone close to you will be impacted by the United Way,” he said. “It’s one of the easiest things to get behind.”

Tuesday’s kickoff featured a trivia contest about the nonprofit’s history. Board member Matthew Atwood donned a sequined jacket befitting a game show host for the occasion.

Creative ways to mark the campaign’s kickoff stretch far back in United Way’s history. A literal kickoff with footballs marked the occasion in 1989, followed by a re-creation of it in 2017. A tug-of-war contest, meanwhile, was the game of choice in 2019.

Fundraisers for the campaign get creative as well. Just as Dotson recalled seeing as far back as the 1970s, campaign rallies still come to area companies each year to spur donations from employees — in the form of voluntary payroll deductions.

One famous community fundraising effort led Sigma Nu fraternity members at Minnesota State University to ride tricycles all the way from Minneapolis to Mankato in the late 1980s.

A new way to donate this year will be by voting for people’s choice winners at the upcoming RibFest. New agencies or programs receiving funding in 2022 include Bethlehem Inn’s shelter in Waseca, CommonBond Communities, Habitat for Humanity of South Central Minnesota’s aging in place program, and Minnesota Council of Churches’ community health worker services.

Throughout the years, Dotson said, the United Way and support for it have gone hand in hand.

“(Reaching 90 years) says as much about the United Way as it does about the community,” he said. “The two things are one and the same.”

As the 2022 campaign chair, Melanie VanRoekel of United Prairie Bank shared how her personal experiences drove her passion for getting involved. Her son was diagnosed with autism at a young age after being born in 2009, while she was diagnosed with multiple sclerosis in 2017.

Despite having a great support system and financial resources, she said she needed much more help than she’d ever imagined after the two diagnoses. She asked those in attendance Tuesday to imagine how many people have to navigate difficult situations without those supports, pointing out the agencies receiving funding from the United Way are crucial in offering them what they need.

“Our community is stronger when we lift up those around us who are marginalized, and an inclusive community will always be a stronger community,” she said. “That is the purpose and the history of the United Way. It’s why the Greater Mankato Area United Way has existed for the past 90 years, so please join us in the 2022 campaign.”