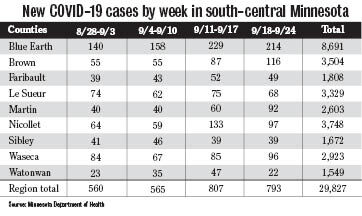 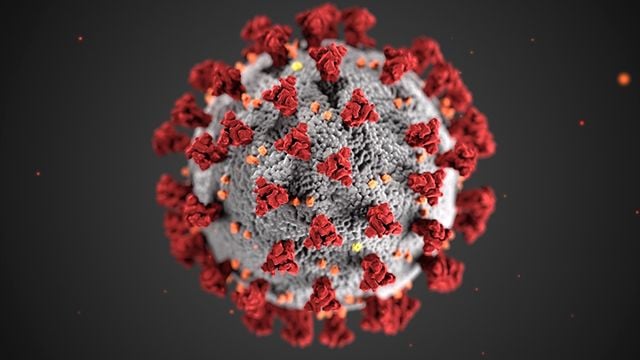 MANKATO — The death of a fourth area resident from COVID-19 has been reported this week.

The latest victim was a Waseca County resident in their early 60s, according to data released by the Minnesota Department of Health Friday.

It’s the 11th death reported in the nine-county region so far in September, topping August’s local death toll of 10 but still well below the deadliest month of December. The regional pandemic death toll now stands at 274.

The number of new COVID-19 cases reported regionally held at about the same rate as the prior week, while some schools are reporting climbing case numbers.

Mount Olive Lutheran School in Mankato had to close for six days.

“This pause was primarily due to staffing shortages based on ill or quarantined staff members,” Principal Adam Pavelchik said.

They closed last Friday after one teacher and two other staff members became ill and three others went on quarantine.

The school reopens on Monday. It’s undecided whether it will add on other days to make up for the lost time, Pavelchik said, because the school began with more learning days on its calendar than required by state law.

Mankato Area Public Schools on Friday reported 27 new cases among its students and staff over the last week. That’s up from 20 the week prior.

Eighteen of the new cases were in early childhood programs or elementary schools, eight were in high schools, and the remaining five were in middle schools or district offices.

There have now been over 70 cases within the district since the start of the school year.

More than 770 Minnesota schools are currently reporting at least one case of COVID-19 among students or staff.

Since the start of the school year around 100 schools have reported a week with five or more cases within their building. Area schools include: St. Peter Middle School, New Ulm High School, Nicollet High School and St. Paul’s Lutheran School in St. James.

Two Minnesota school staff members have died from COVID-19 since the start of the school year. No other information has been disclosed, including whether they caught the virus at school.

There were just shy of 800 cases reported around the nine-county region over the last week. That’s slightly less than the prior week but still up significantly from the start of the month.

Weekly case counts were down in the region’s most populated Blue Earth and Nicollet counties, but were up or steady in some other area counties.

On Friday the Department of Health reported just under 3,000 new confirmed or probable cases and 27 deaths.

Regionally there were 136 more confirmed cases, an increase compared to Thursday but down compared to the prior Friday.