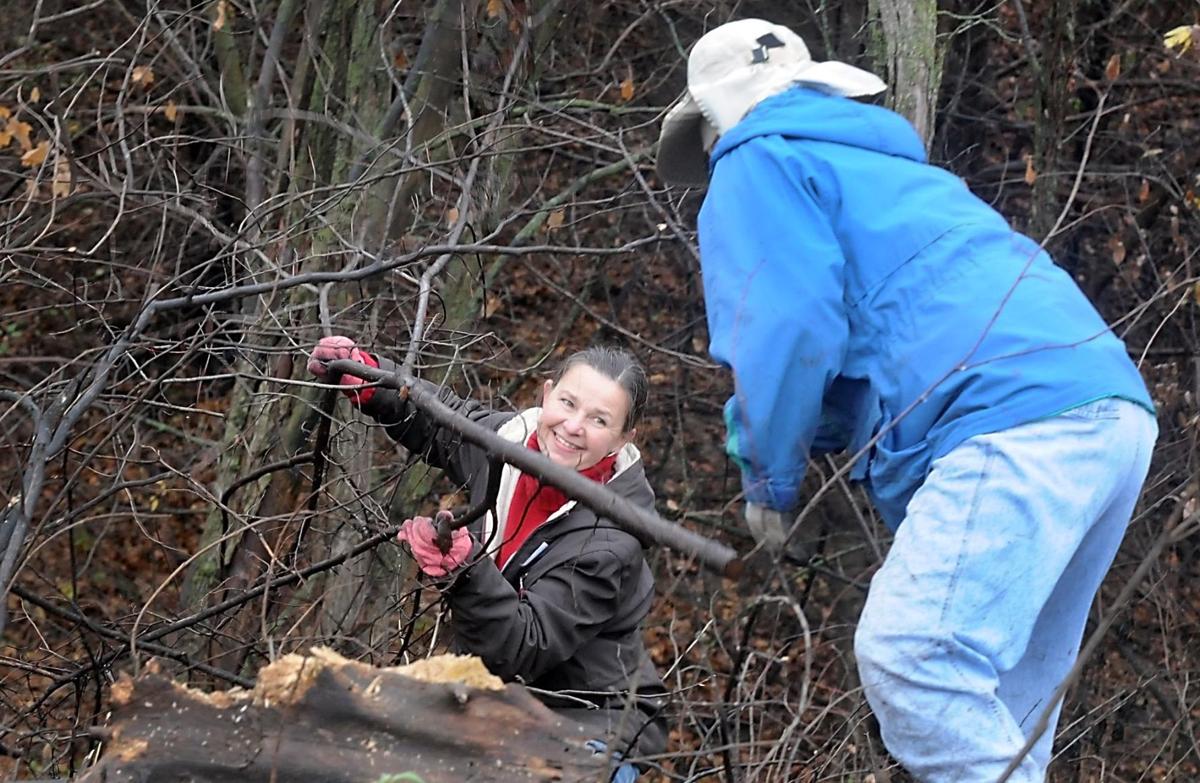 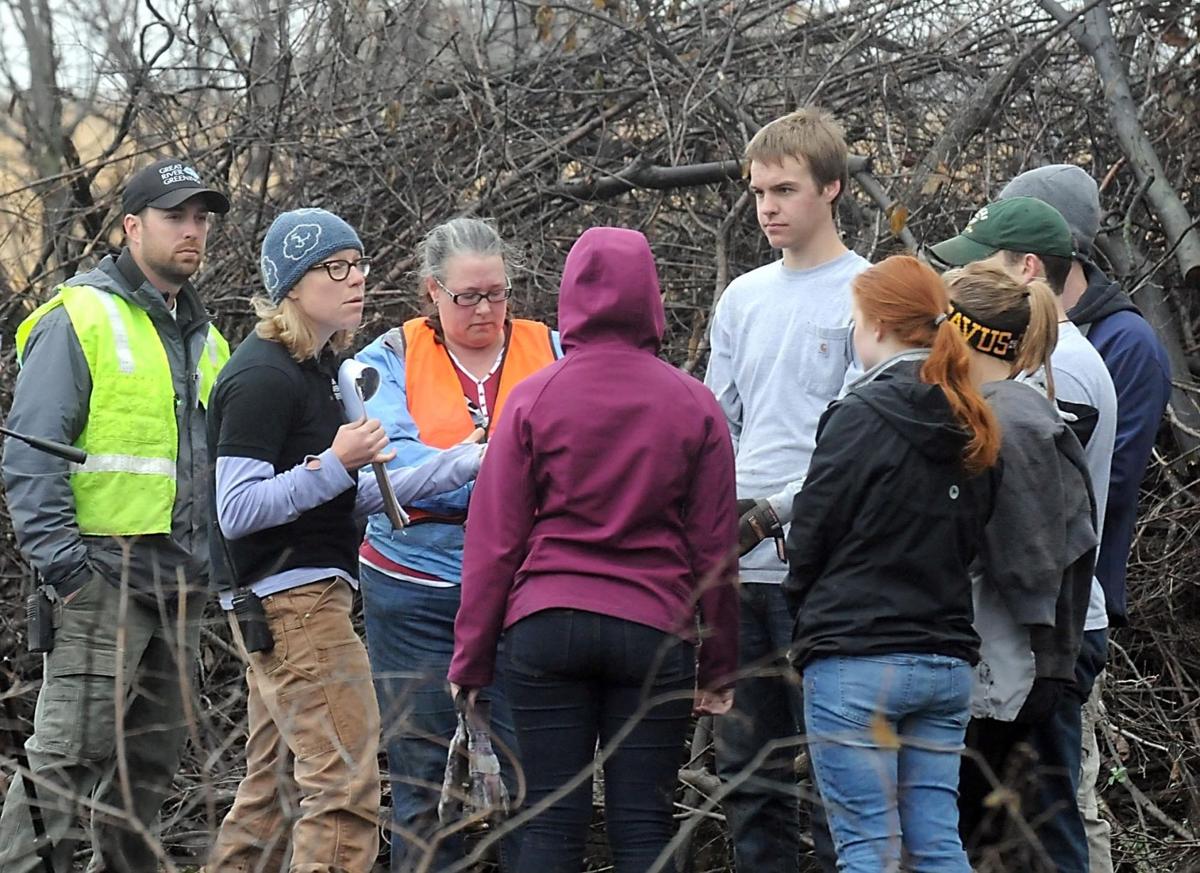 Karen Galles, second from the left, of Great River Greening, explains the ravine-clearing project to a group of volunteers on Saturday morning. Photo by Pat Christman

Karen Galles, second from the left, of Great River Greening, explains the ravine-clearing project to a group of volunteers on Saturday morning. Photo by Pat Christman

ST. PETER — About 40 volunteers tramped through mud, pulling branches up the sides of a ravine and stacking them in huge piles on the edge of a farm field.

The project, organized by Great River Greening, will cut down on erosion in the ravine, which feeds into Seven Mile Creek.

“We know that about three-quarters of the sediment in the creek comes from ravine areas,” said Karen Galles, the Seven Mile Creek watershed coordinator for Great River Greening, during the project on Saturday morning.

And the sediment is one of the causes of the creek’s listing as impaired by the Department of Natural Resources. Too much sediment in a water body causes cloudy water and harms trout habitat. Seven Mile Creek is a trout stream.

The project was one of two in the last few days in the Seven Mile Creek watershed organized by Great River Greening. That organization is a nonprofit and has existed for 20 years, trying to build connections in a community around clean water projects. They work with experts at soil and water conservation districts and the University of Minnesota, for example, while trying to find ways to motivate local landowners to participate in projects that will improve their own land and water quality.

“We develop what the priorities are and then we get to know landowners and what will be palatable for them,” Galles said.

In this case, landowner Charlie Vogel was willing to have Great River Greening help him cut down on field erosion by installing some small berms and holding areas for water in three problem areas. But then Galles asked him about adding the ravine project.

“They were looking for work,” he said, laughing. “As long as they know what they are doing.”

The ravine was once a grazing area, but years after it was used for grazing, invasive plants, primarily buckthorn, had taken over as the main ground cover. Buckthorn chokes out other plants by cutting off sunlight with early-forming leaves. Underneath its canopy, erosion happens easily. The bush grows berries, which birds eat and spread. The seeds can germinate for seven years and if the plant is cut back, it can grow back with 10 shoots where there was one. Its spread can be contained by treating the stumps with herbicide.

Great River Greening staff cut down buckthorn plants and other invasive species, plus some trees to thin the canopy in August. Volunteers moved and stacked them on Saturday. Later, Vogel will burn the piles.

At the end of Saturday’s work, the volunteers scattered seeds for native grasses and groundcover.

Vogel plans to put about 10 acres of field around the ravine’s edge into the federal Conservation Reserve Program, so it will also be planted with native prairie grasses. Those measures will help slow down water running toward the ravine and stem the erosion.

Volunteers were enthusiastic about the work, despite the sloppy conditions after about a half-inch of rain overnight. Several groups of students from Gustavus Adolphus College and Minnesota State University provided a lot of muscle.

Rebecca Krenik, owner of Blue Heron Landscape Design, North Mankato, used a handsaw to cut off buckthorn stems still standing. On a recent project, she ripped out a whole hedge of buckthorn on a client’s property.

“I came to learn about after-care, what to do afterwards,” she said. “If you cut it down, it grows back with 10 little saplings.”

She said that even as a Master Gardener and tree care advisor, she can always use more information, “especially the experience of actually doing it.”

Colleen Flaherty, a St. Peter resident, said she, too, was eager to learn about native and invasive species. Her motivation was to help the watershed itself.

“I really like Seven Mile Creek,” said Colleen Flaherty, a St. Peter resident. “I really enjoy it and want to take care of it.”

She said she has visited and hiked the county’s park on the creek many times over the last 30 years.

“The whole river valley is so special.”