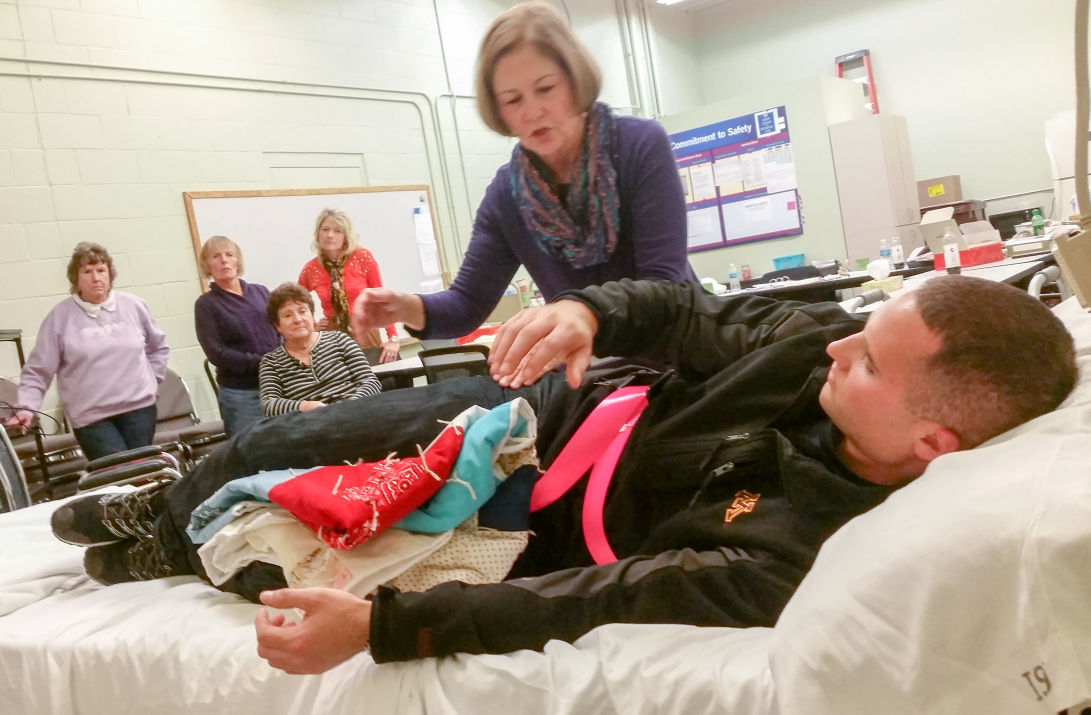 Jon Kearney helps volunteer Joan Lucas demonstrate how to assist a hospice patient roll onto their side during a training session offered by Mayo Clinic Health System Hospice. Photo by Jessica Bies 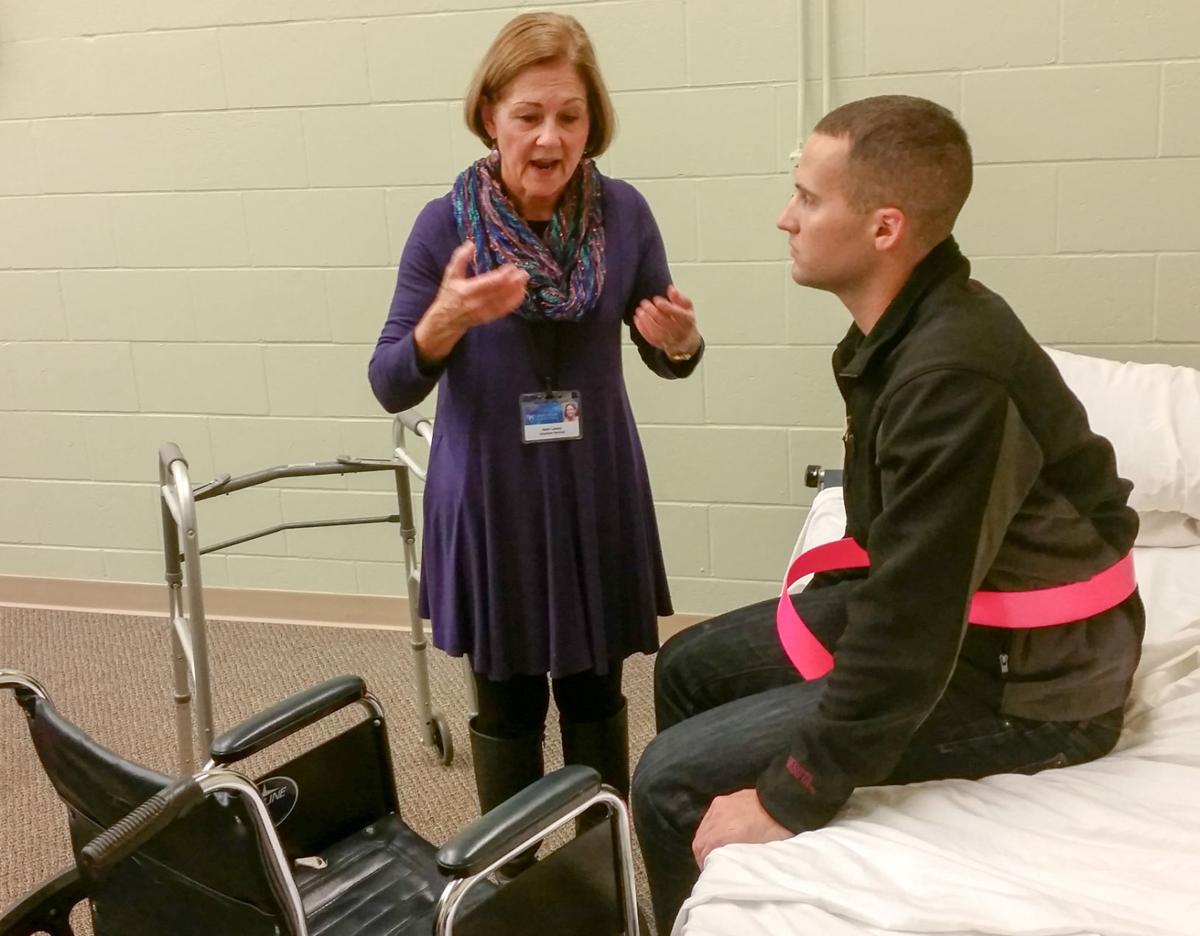 Hospice volunteer Joan Lucas (left) explains how to help a patient up from a bed and into a wheelchair. Jon Kearney, attending a training session offered by Mayo Clinic Health System's hospice program, waits to help her demonstrate the technique. Photo by Jessica Bies

Jon Kearney helps volunteer Joan Lucas demonstrate how to assist a hospice patient roll onto their side during a training session offered by Mayo Clinic Health System Hospice. Photo by Jessica Bies

Hospice volunteer Joan Lucas (left) explains how to help a patient up from a bed and into a wheelchair. Jon Kearney, attending a training session offered by Mayo Clinic Health System's hospice program, waits to help her demonstrate the technique. Photo by Jessica Bies

MANKATO — The body is smart.

It knows how to give birth and be born, how to breathe, exhale and keep itself alive.

It also knows how to die, Kim Rotchadl said.

"Our bodies know how to shut down," the hospice coordinator told a small group of recruits recently.

She was leading a volunteer training session at Madison East Center. A model of care for people with terminal illnesses, hospice and palliative care involves a team-orientated approach to medical care and pain management, as well as emotional and spiritual well-being.

Volunteers are an important part of that system, Rotchadl said. While nurses and medical professionals treat the body, hospice volunteers provide additional comfort and support.

"The ideal volunteer is someone who understands that the transition toward the end of life can be a beautiful experience," Rotchadl tells people interested in becoming part of the team. "It's truly a special journey for all involved."

It can also be tough, she admitted, which is why volunteers are required to go through a three-day, formal training process where conversations, lectures, role playing, team projects and instructional videos prepare them for both palliative and hospice care. They learn about bereavement, body mechanics, communication, feeding, infection control, pain management and proper transfer techniques.

They also discuss what to do when someone is just ready to die.

"Letting the patient dictate what they can do and letting them withdraw," is often part of the job, Rotchadl said. The body is smart. It knows what to do and when it's ready to shut down.

Which can be tough in of itself, because the patient's family may not be ready to let them go.

"Caregivers often see that as very sad," she said. "They want their loved ones to get out of bed."

It swings the other way, too. Some patients in the hospice program "graduate" and may be able to live more independently. (You generally must be within six months of death to be eligible for most hospice programs.)

In fact, hospice care may prolong the lives of some terminally ill patients. In a 2010 study, the median survival time for survivors getting palliative care (which involves more intensive medical care and can be used at any stage of illness) was 2.7 months longer than those receiving standard care.

The mean survival time for hospice patients was 29 days longer, according to a 2007 study. (That figure can differ depending on the type of disease involved.)

Regardless, signing up for hospice care does not mean giving up hope, Rotchadl said.

"Now my hope is I'm going to die pain free, that this is a pain free process," she said, putting herself in the mindset of a patient. "That I'm surrounded by family, that I don't become a burden, that I don't linger too long."

For the most part, Rotchadl's small group of volunteers seemed prepared to join the program after their second day of training.

They all came from different backgrounds.

Kotek is volunteering because she has two friends that are already part of the program. They've had good experiences, she said, and recommended she try it out.

She's also taught childbirth classes before, and sees this as the opposite side of the spectrum.

She volunteered for the program because she's currently unemployed and feels like she has enough time to commit to it.

"A lot of college kids are always looking for volunteer jobs," he said. "... I think this is making more of an immediate impact."

Charlotte Dobie retired from the Trimont Health Care Center (which is a nursing home) about one year ago. She's seen hospice at work, but now gets to be a part of it.

"It took a year for me to figure out this is what I wanted to do next," she said.

Retired physical therapist Joan Lucas, has been volunteering since 1987.

She told the new volunteers Friday that it's a difficult program to be part of, but also an extremely rewarding one.

One of her hardest deaths yet happened just this summer, she said. A 37-year-old man Lucas was caring for passed away one of the mornings she was scheduled to visit him.

She didn't find out until she knocked on the front door.

"I knew I had to go in," Lucas said. "I said a little prayer that I'd know what to say and how long to stay."

She walked out of the house later that day with no regrets.

"I felt so good about it," Lucas said. "When I left, I thought 'this is why we do this.' It is hard, but it makes you really realize what a great thing it is."

Although the majority of volunteers choose to work directly with patients, there's also the need for volunteers who prefer to help with clerical and other general office duties. Time commitments and activities of the volunteer program are flexible.