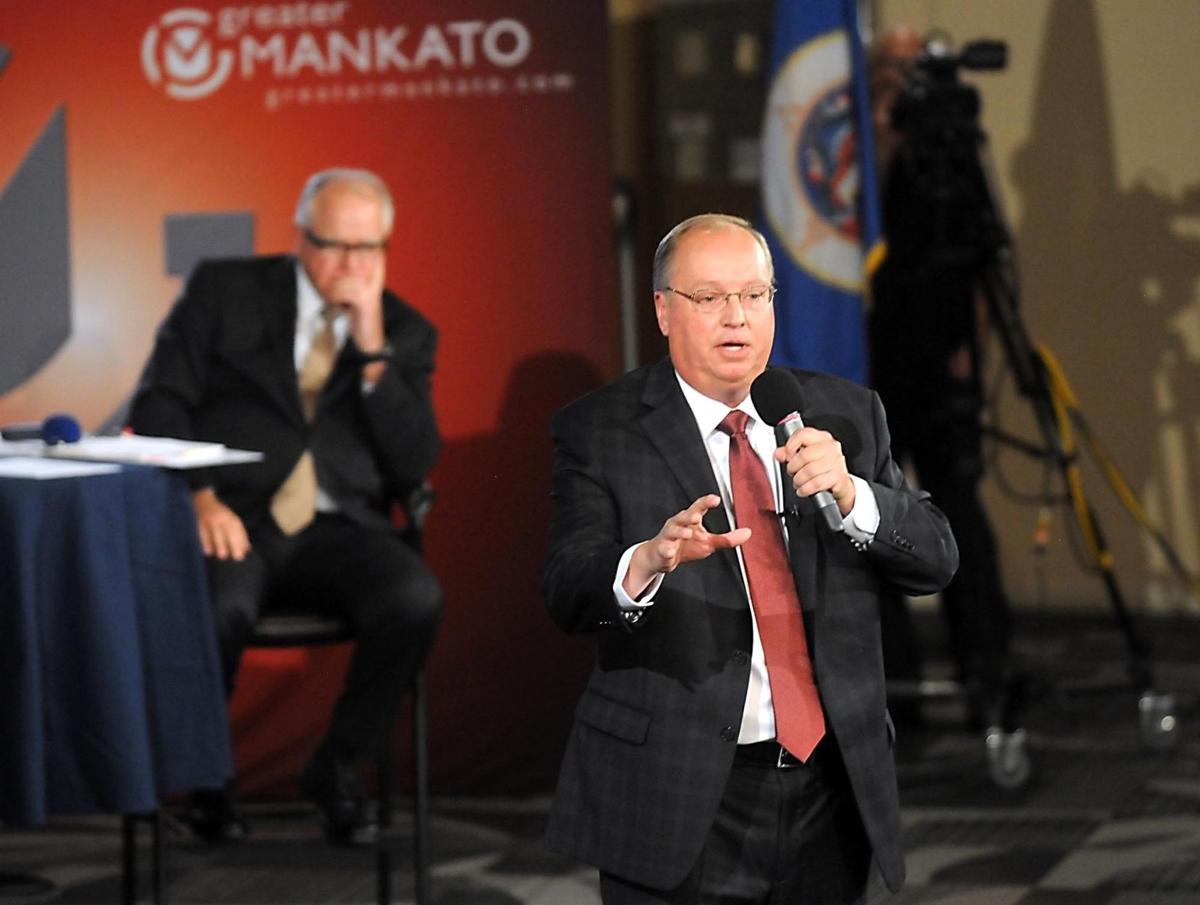 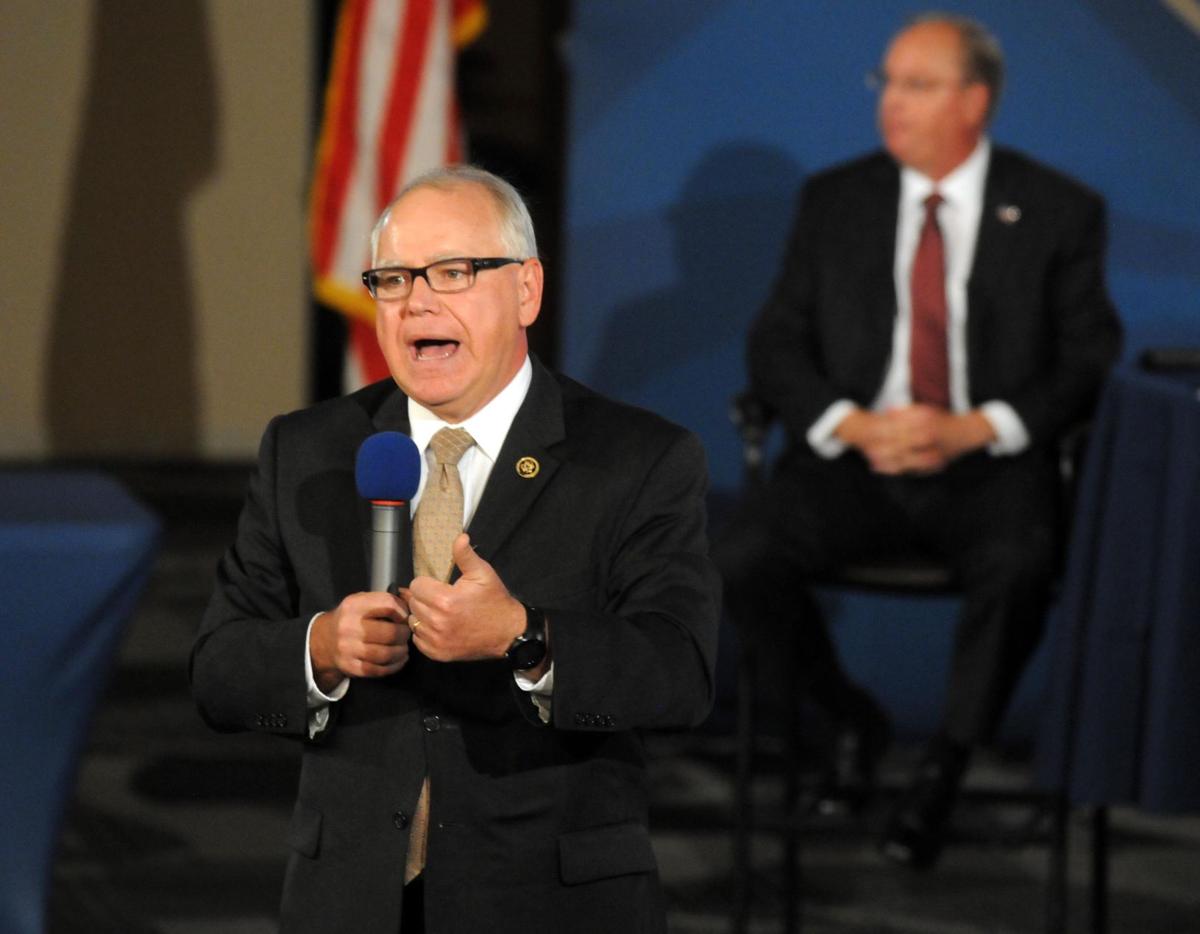 Rep. Tim Walz (front) and Jim Hagedorn at a debate prior to the November elections. File photo

Rep. Tim Walz (front) and Jim Hagedorn at a debate prior to the November elections. File photo

Walz, who is seeking his sixth term, faces a 2014 election rematch against Hagedorn, who he defeated 54 to 46 percent.

Hagedorn sought to portray Walz as a Washington insider out-of-touch with southern Minnesota who fully supports liberal ideology and policies Hagedorn believes has failed the U.S. Walz, in turn, touted his record of bipartisan service in Congress and called Hagedorn out for divisive rhetoric and extreme proposals that Walz believes aren't realistic or workable for the country.

The candidates gave their views on foreign policy, terrorism, health care, agriculture and the economy over an hour and a half.

A Donald Trump supporter, Hagedorn told the audience he was the only candidate who could provide solutions to problems across the country and especially in southern Minnesota.

"I think our country is in serious trouble," he said. "We face big problems that haven't been addressed in the last 10, 20 years."

Yet Walz stressed his record of bipartisan work on a variety of agriculture, national security and veterans affairs measures. He also called Hagedorn out for his partisan attacks and spent much of the forum discussing compromise solutions to various issues.

"I won't apologize for reaching across the aisle to get things done," Walz said.

That didn't stop Hagedorn from tying Walz to the Affordable Care Act, nor to issues that have cropped up since MNsure, the state's health insurance exchange, opened in 2013.

Hagedorn supports repealing the ACA and putting in an interstate insurance exchange, along with tax credits, separate insurance pools for people with pre-existing conditions and another for small businesses. Yet he spent more time discussing problems with the ACA and how they affected Minnesotans.

"The congressman has avoided the issue, run away from the issue, and then he wants to blame the Mayo Clinic and others for his vote," Hagedorn said.

Walz acknowledged there were issues with the ACA but ultimately supports it as a necessary step to reform health care across the U.S. He pointed out 26 million U.S. residents have gotten insurance under the ACA, while many of those people either wouldn't have received insurance due to pre-existing conditions or wouldn't have been able to pay for insurance in the years before the ACA's passage in 2010.

He also called out Republicans for trying to repeal the ACA without presenting a fully formed solution to replace it. Walz compared the controversy surrounding the ACA to the time Medicare started in the mid-1960s, and pointed out then-California Gov. Ronald Reagan publicly opposed Medicare when Congress created it in much the same way Republicans oppose the ACA now. Reagan later worked as president to reform Medicare.

Walz and Hagedorn also shared their views on addressing workforce shortages and growing the economy — Walz believes expanding programs like the GI Bill to provide free college tuition for those who go into national service would benefit young adults, while Hagedorn proposed exempting adults 18 to 30 years old from paying federal taxes as long as they made less than $50,000 annually, in order to stimulate more economic growth and allow young adults to pay for college.

Yet the candidates couldn't resist taking shots at each other on issues such as foreign policy and veterans affairs. Hagedorn called Walz weak on foreign policy for his refusal to address "Islamic terrorism." Walz, in turn, touted his extensive military and government experience and said Hagedorn offered no solutions to addressing why terrorists are radicalized to begin with.

Hagedorn believes the U.S. should temporarily quit taking in refugees as a way to combat terrorism.

Walz said the issues are a lot more complex and require the kind of military and government experience he possesses.

Hagedorn also tried to call Walz's record on veteran affairs into question. He said veterans are "worse off than they were 10 years ago" due to issues such as the VA hospital system mismanagement that led to veterans waiting months for treatment, among other issues.

"I don't think there's anyone that would argue that veterans are better off today than they were 10 years ago," Hagedorn said. "The civil service rules of this country need to be reformed and changed."

Walz, considered one of the top experts in the House on veterans, advocated for constantly reforming and modernizing the VA system. He said Democrats and Republicans often find agreement and compromise on veterans issues.

He also called Hagedorn out for allegedly insulting a veteran friend who disagreed with the Republican's position by calling him a "half-soldier" and told him to "roll away." Walz's friend lost his legs and an arm in Vietnam and uses a wheelchair.

"This one, for me, is personal," Walz said. "This issue of dividing our veterans over issues that are untrue, and trying to find a political issue on this ... there is no difference and there is no argument. Everything doesn't have to be filtered through a partisan political lens."